Whether you’re planning a multi-day corporate shoot or just want to brush up on your organisational skills, Jon Scott shares some advice

Jon Scott discusses the making of a two-minute promotional video for the University of Plymouth (above).

Planning is everything. One of the biggest pitfalls you can fall into as a filmmaker is to rush into a project and begin filming on day one. This article is a breakdown of the steps used to plan, shoot and edit an in-depth corporate video. Hopefully, this will give you the basics needed to take on and plan your own multi-day, long-term video project.

Establishing contact with the client is one of the most crucial parts of the project and sets the stage for the final film. Ideally, this will be a face-to-face meeting or, at the very least, a phone call. Avoid convoluted email conversations as these are impersonal and crucial details can be easily misinterpreted.

Having made contact, it’s vital that your client answers the following three questions about the video:

This could be a person, subject, building or location.

Is the video intended to educate, inform, present a call to action or entertain?

Your audience could be school children, university students or corporate partners, for example. But don’t stop there; find out the age of your audience and whether they have a previous knowledge of the subject. Learn whether your audience is relatively broad or a very niche group of professionals too.

You must also consider the feel of your film. Is it informal, formal, comedic or commercial? The visual look is important too. Perhaps it’s clean and professional, or maybe a carefully shot aesthetic is required or even a raw handheld documentary style.

You will also need to pin down more specific details such as:

The list above could be endless – common sense and extensive planning is key. It can be handy to have a list of questions ready before you meet with your client. Research your client’s company/specific area of interest and show your enthusiasm. It’s also important to be realistic about what you can achieve for them in terms of the available kit and budget, and deadline. 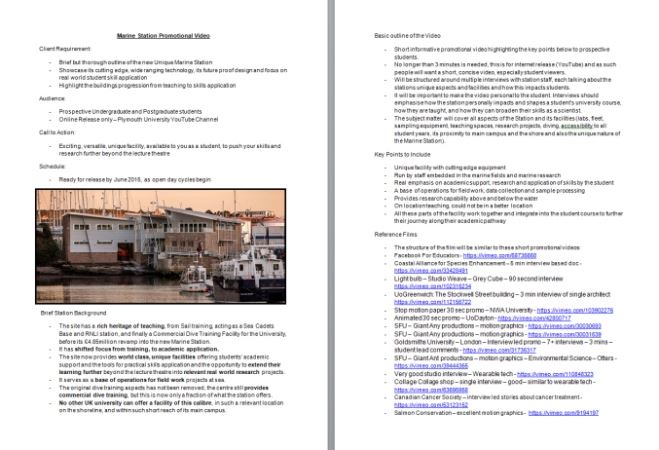 Time spent planning before a shoot will save time and stress when you're actually filming.

We will typically take the initial brief from the client meeting and begin building around it. This of course takes time, but is well worth doing. Look at other people’s work for inspiration and gather as many resources as you can to plan out a draft version of the video.

The ball is now in your court, and it’s your job to turn the clients ‘call to action’ into an engaging visual tool for them to use. Remember the three vital questions you asked in the initial client meeting, and use those as a skeleton for the entire video. Storyboarding can help solidify a basic script or voiceover and this can be built into an animatic (an animated storyboard). An animatic will also provide you with a form of shot list, which can become extremely time saving in the pre-production and principal shooting stages.

This forms the main body of most corporate video projects and can often be harder to do, more time consuming and more critical to get right than the filming itself. It’s vital to get this stage of production right. Otherwise, the whole project can be compromised. It involves everything to do with the video…

Hopefully you can appreciate that this list will never really end.

Being able to act as a good producer is vital for multi-location and multi-day productions. If you are a single shooter, this becomes your responsibility along with everything else. But, it can be done easily as long as you look as far ahead as you can; build time into your schedule for things to go wrong and keep a cool head when things need to be changed at the last second. Most importantly, however, don’t forget to keep the client’s initial needs at the forefront of everything. Make sure you are still going to deliver their message.

Now is the time to finally pick up a camera. Pre-production has taken care of your timetable and you’re on location early, ready to go with a well-scripted shot list and fully-prepared talent. You have sorted your camera settings and decided on the look you want to go for with your client. This is why preparation is key – you don’t want to be deciding on any of this on the day. You want to be professional and totally focused on the picture, without distractions.

During this project, no footage was shot for at least a month after the initial client meeting at the Marine Station. Boat schedules, voiceover scripts, and safety and insurance papers, along with camera kit and settings had to be confirmed and decided upon before anything could be shot.

Despite the careful planning, bad weather and the delayed availability of some locations meant it was not possible to capture some of the shots before the deadline. So, our team came up with a solution to animate existing still images to use in place of the missing footage. This is the nature of filmmaking – plans always change. It’s vital to keep a cool head, and have the ability to adapt and evolve a video or film to suit changing conditions. 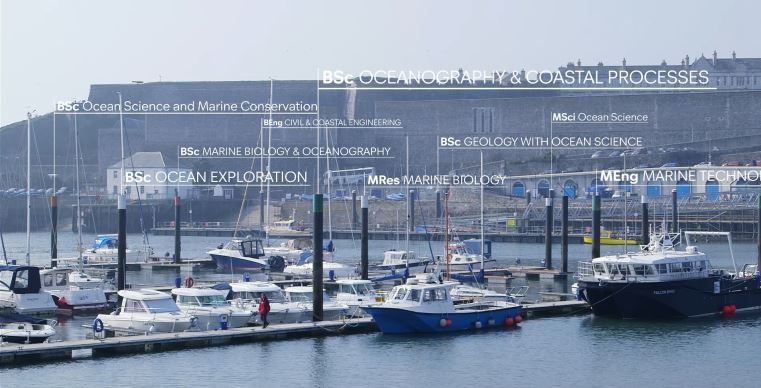 Enlist a friend or fellow filmmaker to watch your edit – they might spot something you haven’t.

This is where all of your hard work, from the initial client meeting, through to pre-production and principal shooting will pay off. If you’ve had the final look of the film, the shots, the audio and the colour grade in mind since day one, editing should be a fairly painless and straightforward process.

Take your time and be sure to schedule regular breaks – you will begin to miss glaring mistakes such as typos or bad cuts if you don’t. Keep secure back-ups of everything in at least three separate locations, and keep the client’s needs at the forefront of your mind. Getting feedback from a fresh pair of eyes, ideally from a fellow filmmaker, can often help at this stage.

If you can, try to make sure they are part of your target audience as this could help you tailor the video further. Keep the client informed of progress but do not send them small clips of half-completed footage, as this can be counterproductive and could lead to endless requests to change small details before the full-length video is even edited.

Once a final cut is completed, you can submit it to the client for their first review. This may require carefully managing the client’s expectations, as no matter how thorough your brief, the client has probably already got a version of the video in their mind. As a video professional, you should know what looks good on screen and you may have to gently help steer the client away from any changes that could detract from this. However, at the end of the day, the client is paying and they have the final say when it comes to the edit.

Although it may seem like a daunting task, the correct planning – combined with a flexible attitude – makes multi-day and multi-location video production extremely manageable, even as a single shooter. Despite the large range of shooting locations, the small number of people involved, timetabling clashes and bad weather, the Marine Station film was delivered 10 days before the deadline. It was also received extremely well by the client, thanks in no small part to the in-depth planning before filming began, the ability to be flexible and make quick changes to initial plans, and even a bit of good fortune.