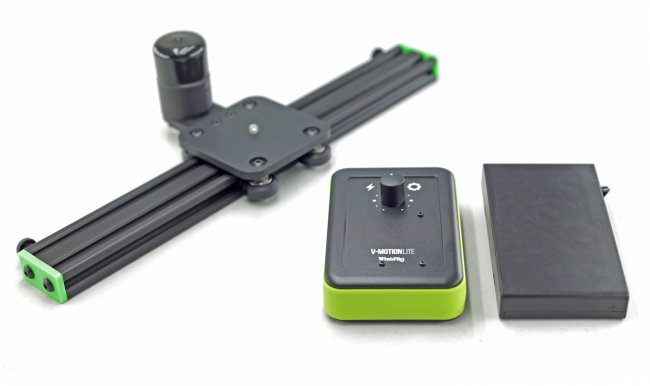 You’d be hard-pressed to find cheaper camera sliders than the ones in Rat Rig’s V-Slider range. The smallest and cheapest model is the V-Slider 35, which only costs £78 (at the time of writing). I’ve been pleasantly surprised at just how well built this slider is — at this sort of price range, you really don’t expect much in terms of build quality, but the V-Slider 35 holds up. There isn’t really much that can go wrong with it; at its core, is a solid piece of anodised aluminium that makes up the rail. Attached to the rail, via four robust Delrin wheels, is the stainless steel top plate.

What makes the Rat Rig slider even more appealing is the new addition of a motion controller kit, the V-Motion Lite. This device can be used with all of the sliders, currently in the V-Slider range. The kit consists of a basic control unit and battery pack, and is currently priced at £125. Unfortunately, the kit doesn’t include one of the most vital components, the motor. However, this is because three different motors are available (Timelapse, Standard and Fast), each currently priced at £45.

More expensive systems can cater for both long time-lapses and fast movements, using one motor. But even though the V-Motion Lite motors can vary direction and speed, it would seem — at this price point — we can only ask so much of the budget mechanism. The following speed stats are based on the time taken, by each of the available motors, to move the camera one metre.

The motors connect directly to the top plate by two small bolts, which can be loosened and tightened using the same size hex key as the bolts found on the V-Slider itself. Once you’ve attached the supplied rubber belt to each end of the slider and fed through the motor cog, you’re good to go. Of course, for the most flexible V-Slider you’d need all of the motors, and they’re straightforward to swap. But realistically, I don’t think you’re going to go out and change the motors during a shooting. So long as you’re happy to mount the slider atop a tripod, you can mount the motor inverted. This could prove useful if you’re struggling to mount a larger camera or tripod head to the top plate. 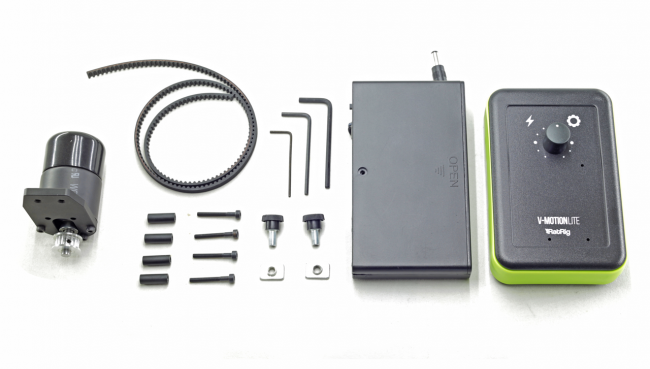 The V-Motion Lite’s controller is somewhat basic. Only one control knob commands both the direction and speed of travel. At the top of the unit there are two connections; one to connect the motor cable and one to connect the power source that drives the system. The kit comes with a battery housing that runs off eight standard AA batteries.

The controller seems rather large considering and I can’t imagine it house that much inside. I would like to see the battery housing incorporated within the controller’s body, especially since the battery housing’s power cable is relatively short (most of the time the controller and battery housing will be sat together). I’ve found it easier to just tape the two together. Sure, it’s not pretty, but it gets the job done, and at this price point, it’s nothing to get too bothered about. You can also plug in any standard 12V DC power supply that uses the standard DC barrel jack. So, if you have a better portable battery system to use or want to run the slider on mains power, you have the option. 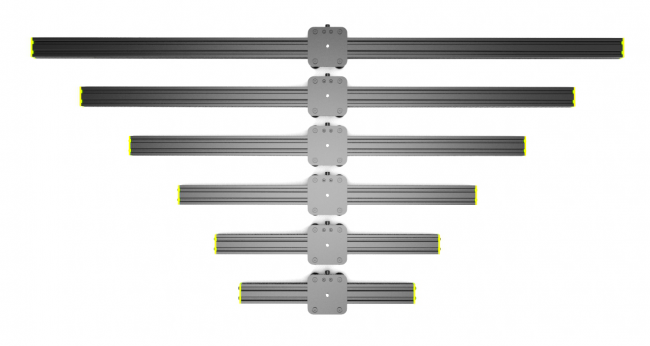 I tested the Standard motor and from my experiences with it, it’s a simple system that works well. It’s not the quietest of motion controlled sliders, so if you’re recording audio with a camera’s on-board microphone or a top-mounted shotgun, then it definitely would be heard. I do like the portability of the V-Slider 35; it can easily fit inside my backpack alongside my other camera gear. But should you want to pull off a shot that has more travel than the 35cms you get with the V-Slider 35 rail, other V-Sliders (up to 100cm in length) are available. The V-Motion Lite will work in exactly the same manner.

The V-Slider 35 is a very basic motion controlled slider system. You can’t loop the movement (so that the camera just slides end to end on its own) and you do need to stop the motion when it gets to the end of the slider so as not to put stress on the motor. However, you can purchase the full system (V-Slider 35 and M-Motion Lite) for as little as £248. This will allow you to create consistently smooth movements (with camera rigs weighing up to 10kg). That’s cheaper than a CFast memory card! You can’t say fairer than that.