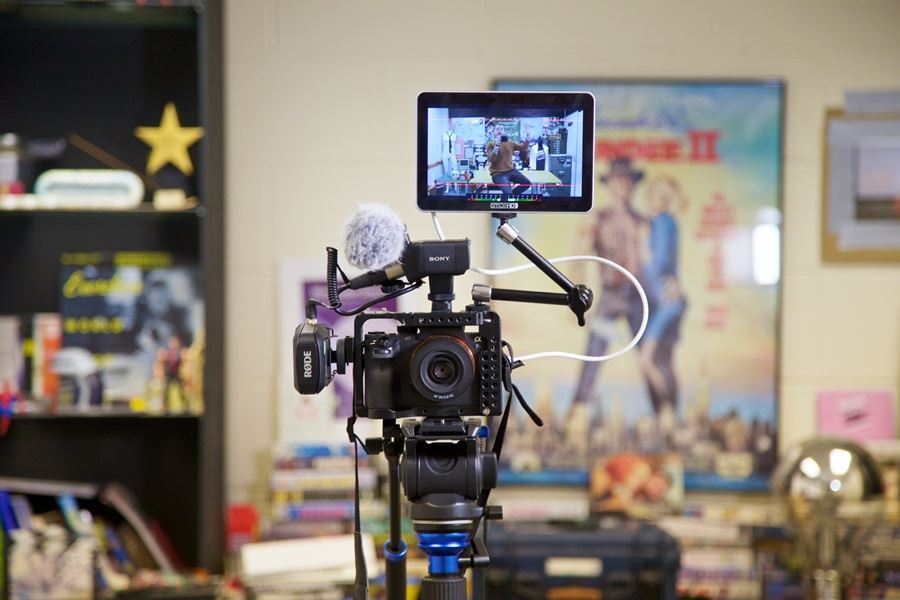 I work as a self-shooting director and predominantly make short-form documentaries. As such, I always rely on kit that’s lightweight, portable and quick to assemble. I also tend to shoot on mirrorless systems, so I’ve found it vital to have a sturdy and reliable monitor that’s up to the job, across a range of shooting scenarios. Of course, when conversing with any of my fellow filmmakers, SmallHD is almost always top of the list. So, I was excited to get my hands on the new SmallHD FOCUS 7 touch-screen monitor.

Straight out of the box it’s a pretty sleek little unit that’s not heavy and has a definite feel of quality about it. There’s a single power button on the top of the monitor, some hidden inputs and a few mounting points, but it’s largely an unfussy and really pleasing design. It also represents really good value for money, especially for indie filmmakers or production teams shooting corporates. In fact, it feels like a bit of a steal for a product of its calibre.

Power it up and you have a great full HD, LCD display that boasts a brightness of 1000 nits, meaning the screen is viewable in just about anything but the very brightest sunlight. As a member of Northern England’s filmmaking contingent, that’s not going to be a problem for me… I ran out to the back garden with my Sony A7S II to fire up the FOCUS 7 on a pretty overcast day and it was a revelation. The image was super crisp and bright, and the touch-screen menu system was so intuitive, it immediately made sense to me. 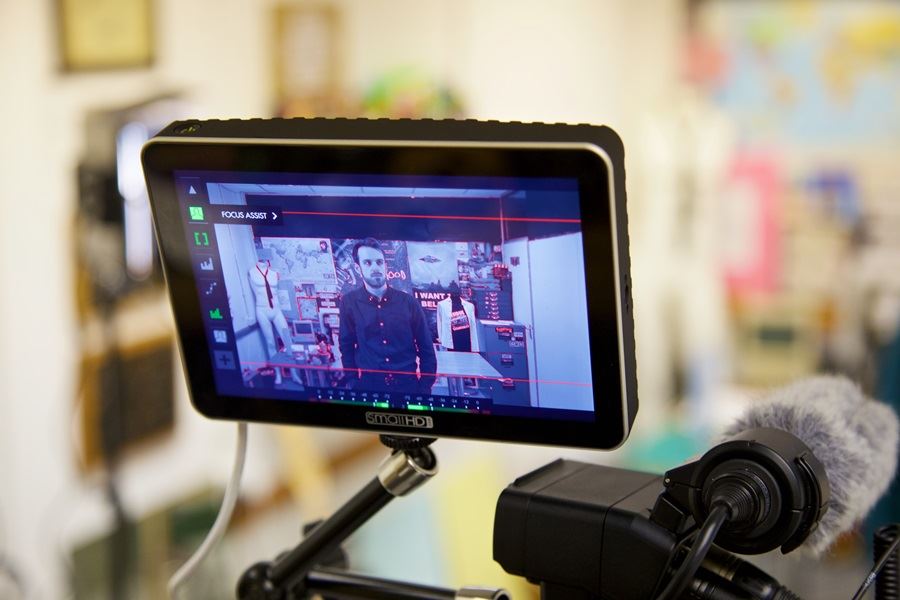 I delved deeper into the monitor and its menu system in my studio, where it felt equally as impressive. I had a few interviews and a bit of b-roll to shoot, so I got my space set up and whipped out the monitor. I waxed lyrical to my interviewee about the test I’d done in my garden – his lack of interest was palpable… The FOCUS 7 feels like a rugged little thing and it’s actually surprisingly light, something that’s absolutely key for me.

It’s got slots for two Sony L-series batteries, which does add a fair bit of weight to your rig, especially if you’re starting with a little mirrorless setup like me. However, the monitor itself adds next to nothing to the load in your kit bag. What’s more, with those two batteries attached, this monitor is going to run all day, and with my limited usage I never even came close to the unit dying on me.

SmallHD says that one of the key benefits of the FOCUS 7 is that it offers a large on-camera display without making the setup feel cumbersome. This is where I have to disagree ever so slightly, and this may be the only negative I really have to aim at this particular system – it feels just a little too big. I like my rig to feel super compact and ready to move, and for my money, the FOCUS 7 feels a little more like it’s crying out for the eyes of a director or client sat in one of those comfy chairs. However, this observation depends entirely on the individual’s shooting preferences and should not be considered an overarching issue with the product. 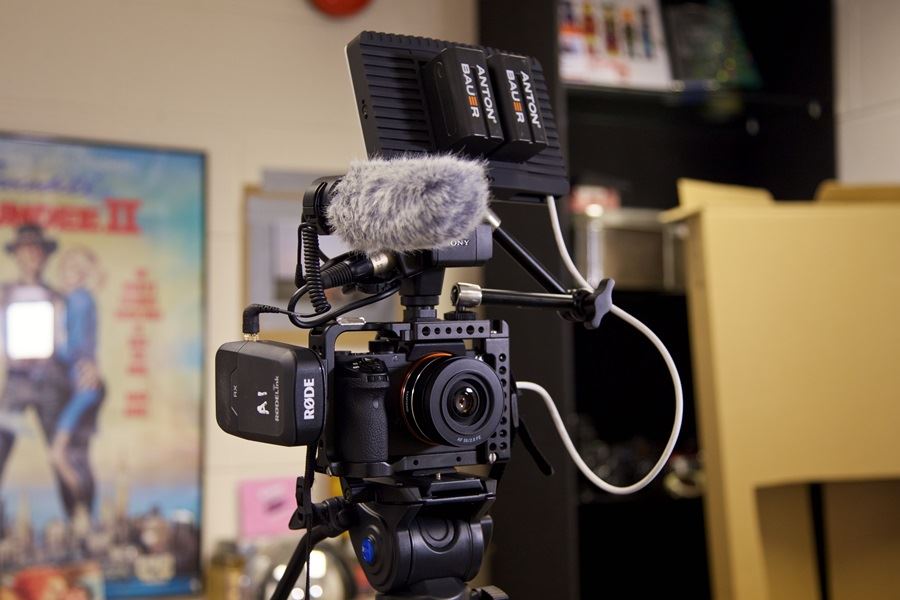 I’m still a big fan of this monitor and if I was working with a slightly bigger rig, it would make total sense. A few tech specs: The FOCUS 7 supports signals of up to 4K UHD at up to 30fps, and real-time 3D LUTs, monitor profiles and screen overlays can be loaded using its SD card slot. I didn’t get a chance to test out this particular feature, but I can see it being a godsend for certain gigs. Anything that makes me and S-Log2 better friends is fine by me.

As far as what’s going into and coming out of the monitor, you get a full-sized HDMI input, which is slightly recessed to keep all your cables nice and safe – minimising the risk of anything physically interfering with your connection. You can also get audio output using the monitor’s stereo headphone jack. It’s all pretty neat.

I’ve touched on it already a little, but the FOCUS 7’s operating system and menu are both total winners, they just make sense. All of the settings are customisable and you can create ‘Pages’ for different cameras, which you can then swipe through, allowing you to quickly select the optimum setup for the rig in question. In terms of exposure assist tools, you’ll find an absolute playground of histograms and scopes, all customisable and moved via the touch screen. The unit’s focus assist capabilities are also top notch. Little details, like being able to pinch to zoom, proved really useful when shooting a few quick interviews, solo. Anything that makes my job easier and more efficient can go right in the kitbag! 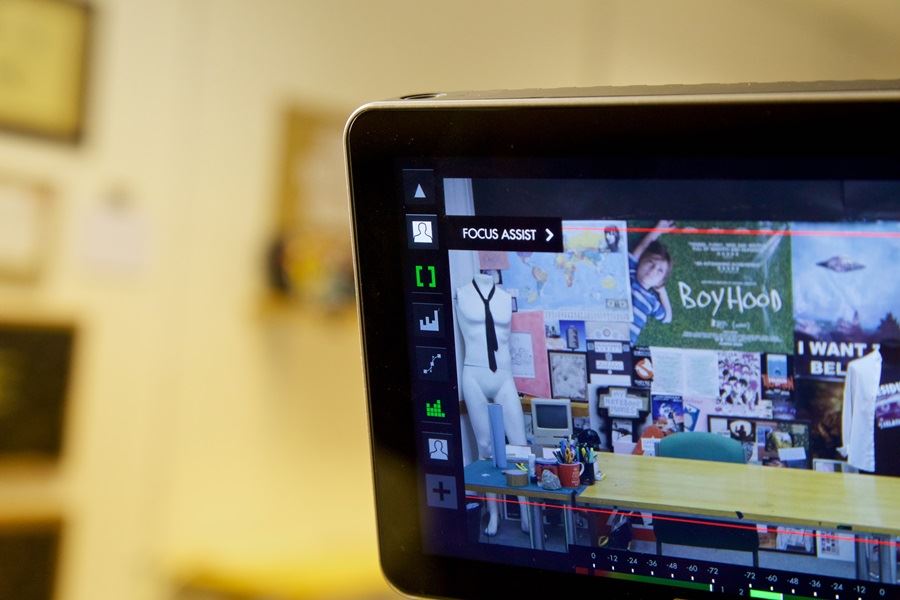 You can add basically whatever markers you like, including building your own from scratch, and there’s a ready-to-go option if you’ve been lucky enough to be commissioned to produce a vertical video. I know loads of people will be excited about that. There’s just a heap of additional calibrations and functions to play with, so that you can customise the FOCUS 7 to have, at hand, the right tools for a plethora of jobs. I mainly tested the unit on my studio-based interview setup and was very quickly able to create a suite of functions that were perfect for the job, and I look forward to doing that for other shooting environments too.

I was mostly shooting on sticks and had the monitor on a ball-head attachment. This isn’t ideal, especially if you’re dashing about with your gear, without fail these attachments always slip off eventually. SmallHD offers a pretty elegant solution to this with its 7-inch SmallHD tilt arm – a robust and lightweight way to attach the FOCUS 7 to a camera or gimbal.

It’s available in the FOCUS 7 Gimbal Accessory Pack and looks to be well worth the investment to simplify the setup. I didn’t have access to it during my test, but I can only imagine it would’ve streamlined not just the look, but the time it took to set up my rig. There are mounting points all over the monitor, so it can be used in a variety of positions. But I think it’s interesting that there isn’t one on top, which seems like something of an oversight. 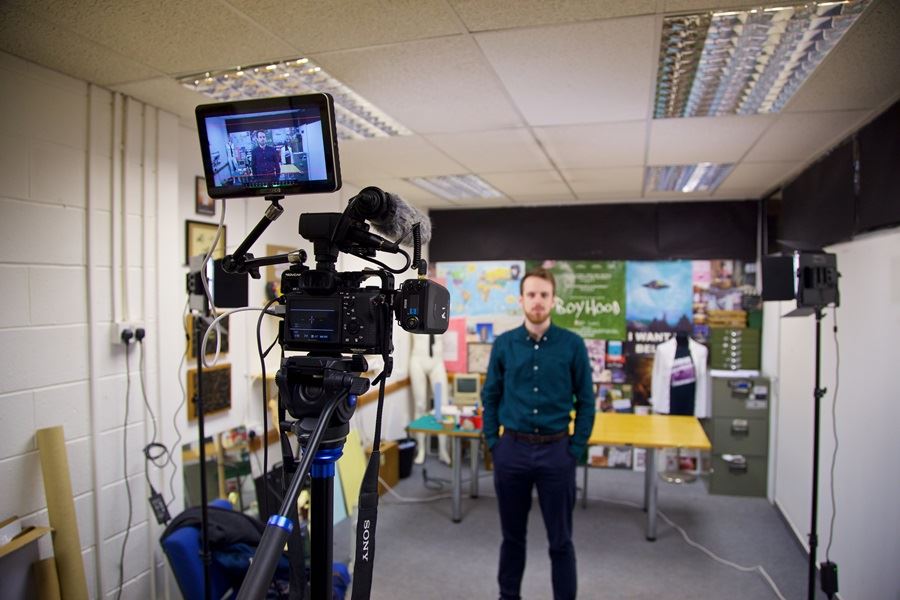 In conclusion, I really loved using this monitor. It almost goes without saying for SmallHD, but you get a beautiful, crisp and bright image from the FOCUS 7, and the sheer amount of customisation available in the menus makes it an incredibly versatile bit of kit. A 5-inch monitor is a more practical solution to my own personal requirements as a filmmaker (yours may well differ), but from a purely objective point of view, I don’t have a bad word to say about the FOCUS 7. It simplifies a bunch of processes, and you can be confident it’ll run all day on the two batteries.

As long as you’ve got a rig substantial enough to pair it up with, the FOCUS 7 feels like a big win for indie filmmakers.

Brett Chapman is an award-winning filmmaker based in Sheffield, England. He originally trained as a journalist, but after graduating he developed a unique style of filmmaking that blends tactile frames and handmade aesthetics with emotionally compelling storytelling. Visit his online home: www.brettinthecity.com.