Brett Chapman: I mainly work from my little studio in Sheffield. I love to make films that have a tactile quality to them, a DIY aesthetic, so having a physical space to work in is really important to me. I want everything I put out to feel a little handmade – give me a pile of cardboard and some gaffer tape, and I’ll be occupied all day.

I mix doing commercial and corporate jobs with a lot of short-form documentary work, and I’ve finally got back into doing some narrative stuff over the past year or so. Often, I combine really personal stuff with a lighter tone; recently I’ve been trying to challenge myself to produce work that removes me as much as possible from the end result. I think Moments really manages to do this, at least I hope so!

WPV: Can you tell us a where the idea for Moments came from?

BC: The idea for Moments was really born out of the poem that Nadia wrote – she’s got a wonderful collection of work and we decided that we wanted to start shooting it. Moments felt like the most immediately visual poem of the bunch, and I had a few Sheffield locations that I was really keen to finally put in a film.

As well as being a poet, Nadia is also an actress so she was the ideal person to work with on this project. It was just the two of us shooting for about three days, and she was an absolute dream. For me personally, I was attracted to the poem’s message about certain – seemingly trivial – moments in life being some of the most profound. Quite aside from the film we made, I think the poem is a beautiful piece of work.

WPV: It sure is a beautiful poem; can you tell us how you planned the shots to go with it?

BC: I had a pretty clear idea about the locations and transitions I wanted to use for this film, so we broke the poem down into scenes, and planned the lead in and lead out of every shot. Over three days we went from location to location across Sheffield, pulling in favours to shoot in pubs and houses, and often waiting for the sun to be just right. I edited as we went to make sure all of the transitions and the delivery of the poem was working. Generally speaking, I like to edit as I go wherever possible.

WPV: So you started the edit while still on location?

BC: Yes, it’s always been part of my process to edit as much stuff on location as possible. I edit in Final Cut Pro (for my sins) and love to start shaping the footage as soon as I have it. On this shoot, I did a quick sound sync and grade on every scene after we shot it, just to make sure we had everything before moving on – this might not work for everyone, but it’s the way for me.

Once we wrapped, I chucked all of my individual scenes into a timeline, and started refining and tweaking what we had. We planned the shoot, and shot the ins and outs pretty meticulously, so there wasn’t much to do. For me, the main headache was settling on a take, because Nadia did so much wonderful work. 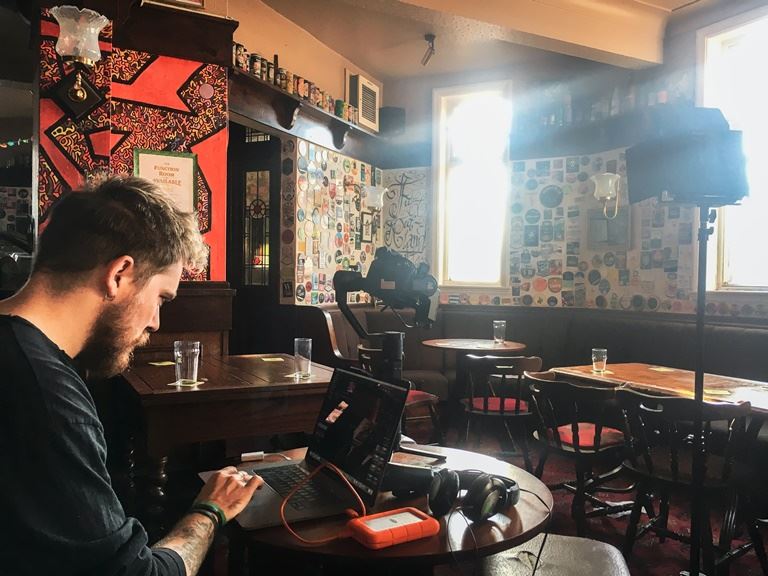 BC: This is going to sound like an advert, but every single piece of kit we used was bought from Wex! I went on a bit of a spending spree last year and upgraded all of my kit. It was actually a pretty simple setup, especially as I was shooting solo. I shot on an A7S Mark II, with a 50mm Canon lens and a Zhiyun Crane 2.

It was really important that we were mobile and able to shoot quickly, and the aforementioned setup made that possible. For sound, we had a RØDELink wireless system running into a little Zoom recorder, because when I attempted to use the RØDELink on-camera, it threw the gimbal off balance. I’m not 100% sold on the RØDELink yet, but it did the job on this occasion.

WPV: Can you tell us about your approach to lighting?

BC: I really wanted to test myself with this shoot, so the lighting and look was super important to me. We timed certain shots at specific times of day, so the sun would be in just the right spot. For example, the opening and closing shots were done at sunset on two separate days. Internal shots were a mixture of LED panels and practical lights.

For the scene in the bedroom at night, it was as simple as getting some fairy lights and positioning them in just the right spot. Lighting is the weakest part of my game, so I’m working hard to get better. I can see a lot of room for improvement in this film, but I know I’m moving forward. 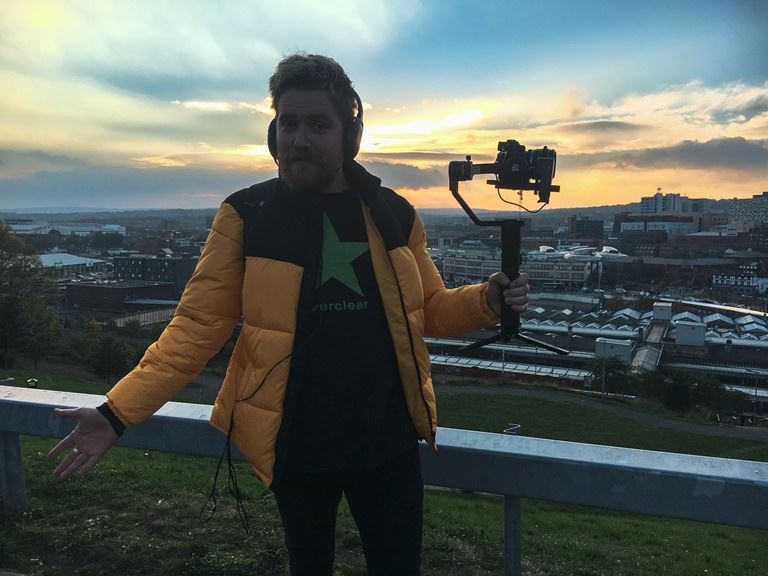 WPV: Did you encounter any notable challenges when filming Moments?

BC: The main issue we faced was the fact that it was just me and Nadia making the film, and it was really quite tiring for me – the Zhiyun Crane 2 gets pretty heavy, pretty quickly! The other challenge we faced was trying to shoot in public places at busy times, but I generally find that if you explain to people what you’re doing, they just let you get on with your job.

At one point, we waited 20 minutes for a group of children and their parents to stop playing on the swings in our local park. We got the shot in the end though!

WPV: Do you have any advice for filmmakers who might be inspired by your work?

BC: I guess my main advice for any filmmaker is to trust in your own personal point of view. It’s your perspective and your taste that will make your work unique and because of that, it means not everyone will like or enjoy what you’re making – and that’s fine.

Other than that, just keep making films. You get better with every single project and if you have to take on work that doesn’t speak directly to what you think you’re about, don’t worry – we’ve all got to pay our rent.

WPC: What have you got lined up for the future?

BC: I have a new film that’s currently going to festivals called Tiny Little Rocks, which also stars Nadia. It’s very much inspired by Before Sunrise (1995) and is another film set in Sheffield, a place I really love.

I’m always putting out new work, so keep an eye on my website for a web series about people’s love lives coming later this year. I just want to get better at directing and keep making films that I care about.

Why You Should Embrace Smartphone Filmmaking | Behind the Shoot