Wex Photo Video: Can you describe yourself and the filmmaking that you do?

Craig Johnson: Always a difficult one, but I'm quite an idealist and the filmmaking I enjoy most is centred around social documentary, nature or adventure filming. I do a lot of corporate and commercial filming too, which pays the bills, but my passion is definitely projects that involve people, the outdoors and new places. I spend half my time in Norway and get to work on a number of nature-themed TV projects, which I love.

W: Can you tell us more about the orphanage in the Philippines?

CJ: House of the Heroes is an orphanage in Manila that looks after 20 children, full-time, within a family environment. The kids are aged four and upwards, and are mostly rescued from the streets of Manila. My wife and I started the orphanage 10 years ago, having witnessed during our travels how many kids were living on the streets and were in need of a home. We put together a team of locals in Manila, who had the right skills and the same desire, and went about raising funds to make this dream happen. The initiative with the coffee plantation came about as a way of raising funds for the project and also creating jobs for people living below the poverty line. 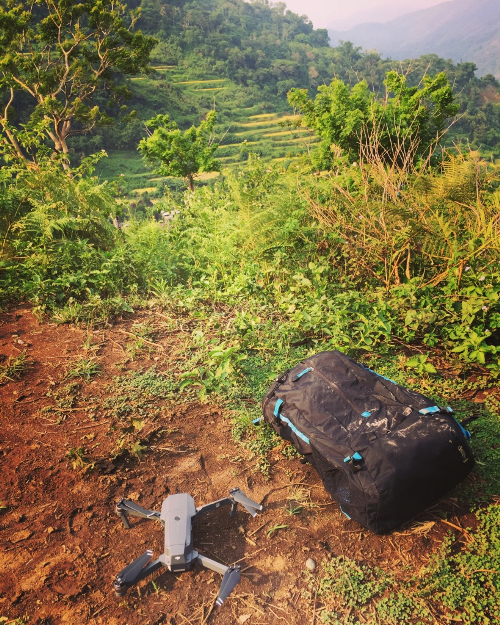 W: How were you able to support the charity?

CJ: We started with what we had, which wasn't much, and have managed to grow a small but significant amount of regular donors to support our work. It's always hard to get new donors. Communication is key in keeping sponsors up to date and informed about what our vision is and what we’re doing. We are small though and are able to send all the money we raise directly to the charity. It’s also key that I’m able to create all the content we need myself, saving a lot of money. I think a lot of charities are struggling to find the resources to keep up on donors’ needs for visual content.

W: How did you plan the shoot and how long was it for?

CJ: The film was made over the period of one week. I had a rough plan, but it was dependent on the availability of local officials and the tribe, so we had to be flexible. There are often many things that are out of your control on shoots like these, and you have to roll with the challenges. Weather was also an issue; twice we had planned to fly, but the flights were cancelled due to bad weather and landslides in the mountains prevented us from reaching the location. We were also dependent on having local fixers arrange access to the tribe and meetings with officials.

W: What were the main challenges on this project?

CJ: You might think that you’re just turning up with a camera and capturing what's happening in front of you, but it's actually taken four years to bring all of the elements together. We had to find a willing tribe, with land we could legally lease. The terrain needed to be correct and with suitable access. And the local authorities needed to be cooperative and willing to assist us. Many small things became huge obstacles.

CJ: I really love where we're at with technology today and it's changed so much since starting out 15 years ago. All of my kit fits inside my carry-on bag from F-Stop (I strap my tripod onto the side) which makes it super easy to get around. I shot mostly on a Sony A7S Mark II, with the audio kit for the XLR inputs so I could use a wireless mic and shotgun mic together. I choose to shoot S-Log 3, as I would be grading anyway and want to get as much range as possible when shooting epic landscapes.

I took three lenses: the Canon 24-105mm f/4, Sigma 70-200mm f/2.8 and Samyang 35mm f/1.4. This trio covered most of my needs, although ideally, I should have had a wide-angle lens too. I try to shoot most things in 4K – even though I edit in a HD timeline in Adobe Premiere Pro – for the extra detail and crop ability, especially when shooting interviews as a one-man band. I also had a DJI Mavic Pro with me, which fitted alongside everything else in my bag, which is incredible.

CJ: We use Adobe Creative Suite for our creative work, though I tend to only use Premiere as it has most things I need for editing, and I like the workflow and stability – it's also good for titling and grading. It’s always a good idea to convert footage (especially Mavic footage) to ProRes, so that you don't have a timeline full of different codecs. Proper organisation speeds up the editing process, and also allows my colleagues to jump into a project I'm working on and find their way around.

I use Premiere's Label Colors [sic] to label different types of shots in the timeline. I also try to keep audio tracks organised, keeping VO, sync and music on separate tracks. I think like a gamer when it comes to keyboard shortcuts too. This speeds things up, as I have the most important shortcuts in finger reach, which limits having to move my hand.

W: Tell us more about the coffee plantation...

CJ: Heroica Coffee is going well, and the video really helped in fundraising. I'm pleased that we've reached our first funding target and are planting this summer. We've built a nursery for the coffee plants that have been growing and have just started construction on a coffee mill to process the beans.

W: What other projects are you working on?

CJ: As I write this, I am currently in Belfast where we (Global Fire Creative) have received funds to work on a pilot for a peace and reconciliation documentary series. I’ll be taking a break from my role within the production company to spend a couple of years in the Philippines (alongside my family) to work with the orphanage and coffee project. I’ll still be working as a freelance cameraman too.

Craig Johnson is a co-founder of Global Fire Creative and Heroica Coffee, and the founder of House of the Heroes.