WexShorts shortlist ‘Nomad’ | Behind the shoot


Wex Photo Video: Can you tell us about yourself and the type of films you’ve been making?

James Burrough: I currently work in documentary development at a production company but have also worked in-house at the BBC. I developed documentaries about a range of topics for online youth channel BBC Three, including a series that was nominated for a short form BAFTA. During that time, I also had the opportunity to produce my own films for the channel and develop my craft as a filmmaker.

I am particularly interested in ordinary people with extraordinary stories and giving a voice to underrepresented communities. In recent years, I’ve looked to combine my love for travel with my passion for narrative storytelling. In my spare time, I create travel guides, vlogs and short documentaries from around the world, which I upload to my own YouTube channel.

WPV: Where did the idea for Nomad come from?

JB: Working in documentary development, I’m always looking out for good stories. Earlier this year, I read The Stopping Places: A Journey Through Gypsy Britain. The book is by Damian Le Bas and documents his experiences living out of a van as he travelled around the UK in search of old gypsy encampments, to learn more about his heritage. It immediately struck me that this story would make a compelling subject for a short documentary.

I loved the way Damian captured the experience of travelling to all these beautiful places in the UK, right here on our doorstep. I’m also fascinated by nomadic living, which is growing in popularity as a lifestyle at the moment. As a filmmaker, I was most compelled by the opportunity to tell this ‘untold story’ about gypsy culture – I wanted to explore the sense of freedom and rich cultural history. I spoke to Damian and shared these ambitions with him, and he was extremely interested in sharing his story. 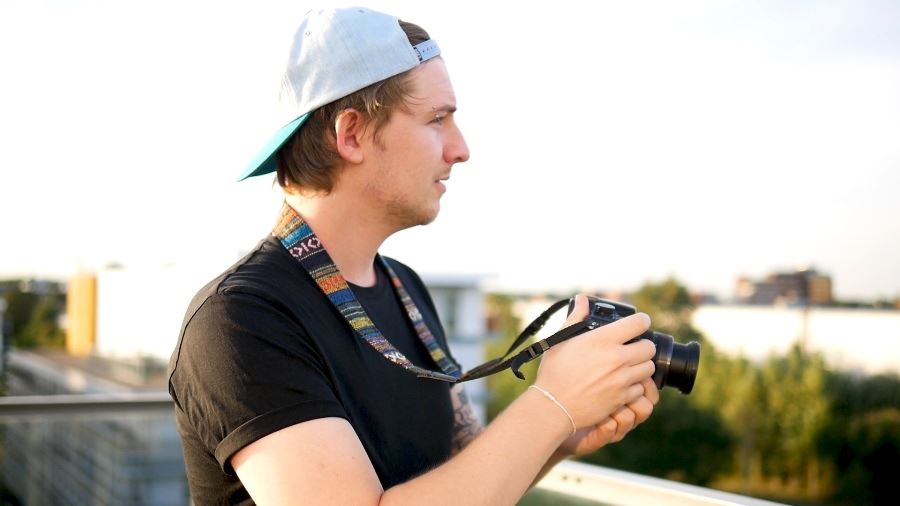 JB: The biggest creative challenge was how to tell a largely retrospective story and make it visually compelling. Damian is a wonderful speaker and storyteller, so I knew I wanted the film to be narrated by him. It was immediately clear that I'd need to do some light reconstruction to visualise his story. I’m not usually a fan of reconstruction, but Damian was happy to work with me to recreate a typical day in the life, on the road. We wanted to keep the shoot as spontaneous as possible to avoid it feeling too contrived, so we planned out a series of the most visually interesting sequences we could film over the course of a single day – shaving, cooking, eating, and washing clothes – and in locations that felt most appropriate at the time.

I was also keen to keep the locations as authentic as possible, so we visited some genuine stopping places, where gypsies would have made camp in the past. Damian found us some beautiful locations, which captured the understated beauty of the most unexpected places, whether that was a layby at the side of the road or a clearing in the middle of a field.

Any good producer will plan around the possibility of bad weather, and due to the nature of the story, I knew the film would be shot entirely outdoors. But following a discussion with Damian, I decided not to try and work around the weather but to shoot in whatever conditions we encountered (good or bad), to reflect the authentic experience of life on the road. That’s the reality of nomadic living. When the weather is good, life on the road is idyllic. But when the weather is bad, life on the road can be miserable and we wanted our film to reflect that reality. Fortunately for us, the weather was beautiful on the day of our shoot. Had it rained the whole time, we would have probably ended up with a very different film!

WPV: What filmmaking equipment did you use?

JB: I normally shoot everything with my trusty Panasonic LUMIX GH3, which has travelled the world with me. But for this shoot I had the opportunity to borrow a Sony FS7 from work. It’s a beast of a camera (I don’t recommend carrying it on the tube during rush hour), but I knew it would be perfect for this film.

The FS7 captures beautiful slow motion (up to 180fps), and knowing I would be working in 1080p later, shooting my master interview in 4K gave me the freedom to crop between a wide and a close-up shot on a single camera. This meant I could set the camera on a tripod and leave it rolling, while I focused on the interview. Because we were shooting entirely outdoors, I also wanted to shoot everything flat to preserve dynamic range without having to worry too much about exposure. This is something run-and-gun filmmakers don’t always have time for.

WPV: Did you encounter any issues when filming?

JB: The main issues we encountered were environmental. Shortly after arriving at our master interview location – an isolated field in West Sussex – a group showed up and started flying drones overhead. We had assumed we’d be totally alone, so we didn’t have a back-up location. We politely asked the group to avoid flying overhead (ruining our sound), which they repeatedly ignored. Fortunately, they moved on after about 20 minutes.

The shoot also happened to be on one of the hottest days of the year. After about an hour into our master interview, Damian realised he was getting sunburned. We didn’t have any suncream and were parked in an exposed area in the middle of a field, miles from the nearest shops. We also couldn’t move the van as it would ruin continuity and waste over an hour of filming. Fortunately, one of Damian’s relatives was happy to drive out and meet us to deliver some suncream, while Damian took shelter from the sun in the van.

JB: Editing is my favourite part of the filmmaking process. I do everything in Adobe Premiere Pro, including the edit, grade and final mix. Knowing I was going to be cutting the film myself, I was able to shoot economically for the edit. It therefore ended up being a very efficient process – I knew exactly how I wanted to cut the actuality sequences and managed to turn it around in about two days.

The main legwork was cutting down the master interview from about an hour and a half to just three minutes. With an interviewee as eloquent and engaging as Damian, it was hard to select only three minutes of the most compelling soundbites to tell the story of a year in his life. I played around with the structure, flow and pacing before eventually settling on the final edit. There was so much footage to choose from, I could have easily cut a ten-minute version of the film!

WPV: Do you have any advice for filmmakers?

JB: I know it’s a cliché, but my main advice for filmmakers is to remember that story is king. Anyone with a camera can make a film, but not everyone can tell a good story. Too often I watch films that have beautiful visuals and sweeping drone shots, but there’s no story. Don’t worry about expensive gear. If you don’t have a good story, no amount of expensive kit is going to make a good film. Kit should only be a tool to enhance your story – otherwise it can become more of a hindrance.

My next piece of advice is to learn to take on board constructive criticism. When anyone can create and upload content, people too often dismiss or ignore constructive criticism that could improve their filmmaking. Working in TV, there’s a culture of receiving and implementing notes from experienced producers that people have now moved away from. I believe we need more of that culture back.

JB: I plan to continue producing short documentaries and travel films for my YouTube channel. Eventually, I’d love to work with brands and nonprofits to create videos that promote sustainability, conservation and travel – subjects I am passionate about.