We sent Chris to test Nikon’s specially astro-modified version of its D810 DSLR, the D810a. Here’s his verdict 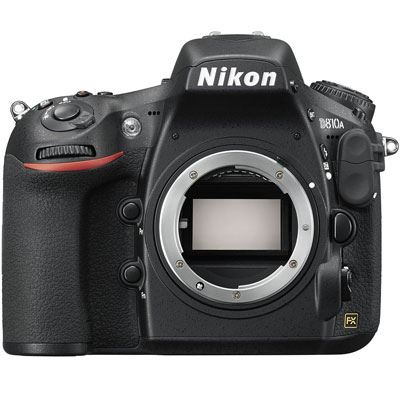 Back in February 2015, Nikon joined the likes of Canon and released a modified DSLR aimed at the astrophotography market. Having started out using a DSLR for astrophotography (as most of us do) I was intrigued as to what this full frame camera had to offer, and was very impressed by the images shown in their video.

However this initial intrigue soon turned to scepticism when I looked at the price. It seemed Nikon had dropped a clanger, as at £2,699 they had priced this DSLR right in the middle of the specialist astro CCD market.

Since the early days of digital photography, astrophotographers have been using CCD censors (rather than CMOS sensors that are in most DSLRs) as these are generally more sensitive in low light, and specialist companies sell fully cooled, PC-controlled cameras containing super-sensitive CCD sensors. We also tend to buy mono cameras and then use special filters to capture colour. Nikon just placed this camera smack in the middle of this busy, complex market!

So what’s so different about this camera? Well, all DSLRs have filters placed in front of the imaging sensor in the form of infra-red block filters, which also block an element of the red channel. Why is this bad for astrophotography? Because one of the most abundant gases in universe is hydrogen (about 75% of all the known mass of the universe) however hydrogen sits within the red spectrum and is therefore among one of the main bandwidths of light blocked by standard DSLR.

The image above shows the Horsehead Nebula in Orion, not taken with the D810a, but my own mono CCD camera using specific hydrogen and red filters. This highlights the level of detail you lose by removing hydrogen.

Astrophotographers wanting to use DSLRs have often resorted to removing the filters, a process that destroys the warranty and potentially the camera as well. What Nikon has done therefore is develop a new filter that blocks IR but allows this red spectrum through. In Nikon’s own words, “The D810A employs an optical IR cut filter with specific transmission characteristics (characteristics in the 656nm range), enabling the capture of nebulae and distant galaxies that emit H-alpha wavelength in red, which can be difficult to capture with an ordinary digital SLR camera.”

Additionally they have stopped (supposedly) the software from conducting anti-noise routines on Raw images, which standard Nikons still do.

With the above in mind, when Wex asked if I would like to test this camera, I jumped at the chance. It arrived just in time for new moon, which is always a bonus. First impressions were good – the camera feels solid and very well-made, however as I use a Canon the layout felt very alien and took some getting used to. To be fair though, once I figured out the controls it was very user-friendly, with the buttons proving easy to find. This is a must in the dark when no lights are allowed. 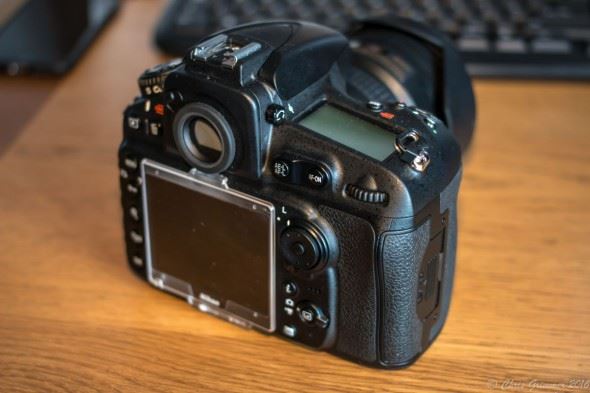 The first thing I did was switch off all the internal image adjusting options, which are many, and include noise reduction, vignette control and auto distortion control. Call me old fashioned, but I would much rather edit images myself post-shoot, rather than trusting built-in settings and risking losing a night’s work due to over-editing. I also shoot exclusively in Raw, taking control with manual settings. 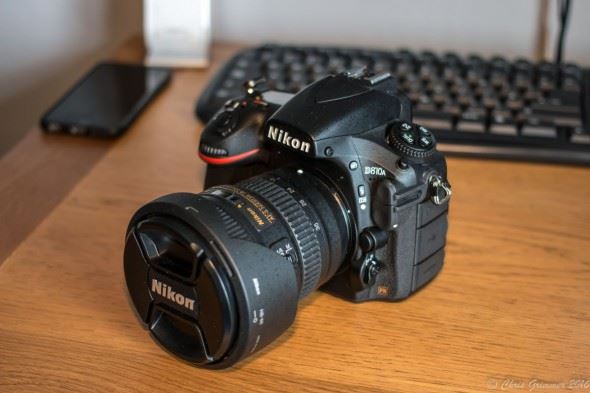 The Nikon is designed to be sensitive to hydrogen (Ha) which makes up the majority of most nebulae. Unfortunately, nebulae are predominantly seen between August and February, which gave me the issue of not really being able to test this camera’s potential on a large, hydrogen-rich nebula. Also during the test period, as it has been all winter, the weather wasn’t the greatest. Testing time was restricted to short intervals between clouds; not ideal for long-exposure runs on deep-sky targets, which usually require around three hours of total exposure time.

The bonus of this time of year is the Milky Way, as long as you are prepared for an early start. Thus, I ended up standing in the middle of a field amongst the ruins of Dunwich Abbey at 3AM under some of the darkest skies I have seen. This was an ideal location – very dark, clear north-through-south with no light pollution. 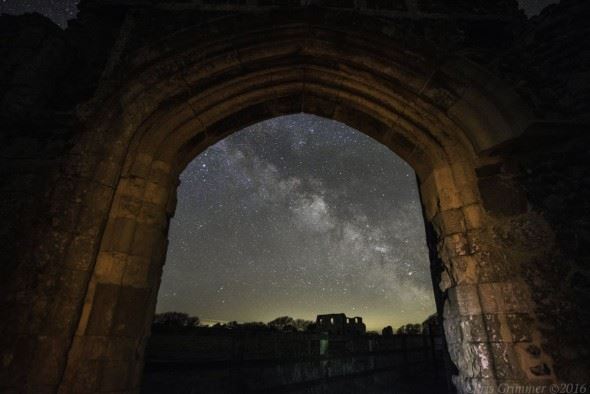 Immediately I realised that this camera could really hold its own in the high-ISO stakes, which was handy as I was shooting with a 18-35mm f/3.5-F4.5 lens – a little slower than is ideal. Also bear in mind I had no shutter release cable or intervalometer and therefore had to manually press the shutter, so a sturdy tripod came in very handy.

This is a ten-panel mosaic, stretching roughly 180 degrees from due south through the east into the north. Thirty-second exposures, f/3.5, ISO 5000 at 18mm. As you will see in the image, the areas of strong nebulosity within the Milky Way – like the Elephant Trunk Nebula and North American Nebula to the left of centre and the Eagle, Omega and Lagoon Nebulas rising to the right – are clearly visible (the strong red patches). These wouldn’t show as strongly on a standard DSLR. The Andromeda galaxy is also clearly visible above Shaun and his red torch.

To put in context how important a dark site is, the orange glow to the right of the image is emanating from the nearest towns in that direction. These are Ostend, Dunkirk, and possibly even Brussels and Antwerp. They’re on the continent and are still showing up that bright in the image!

Another test for the Nikon came by chance, when the Northern Lights decided to put on a show and make themselves visible from North Norfolk. 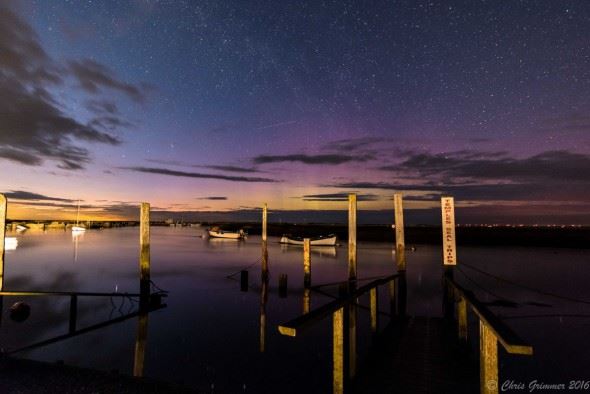 This was 18mm, f/3.5, ISO 4000, 20 seconds, and again the noise is very well controlled. Overall I was very impressed by how this camera worked in low light – match the camera up with a wide f/2.8 lens and this would be a brilliant wide-field setup.

One of my concerns was that my refractor only has a 2-inch focuser (2-inch open aperture), which compared to the full frame sensor at over 1″ wide means it is quite tight and risks clipping the corners of the image (my astro camera has a 1/3rd-size Sony chip).

Additionally a full frame chip will really test out the optics of a scope and will highlight any vignette issues, curvature or astigmatism present (as they do with camera lenses). I think this was an issue Nikon was aware of, as the cheapest telescope it used in its promotional video retails for around £2,500 (Takahashi FSQ 85, which is high on my wish list) whereas mine costs about £800 (William Optics GT81). As it turns out, my concerns were correct. 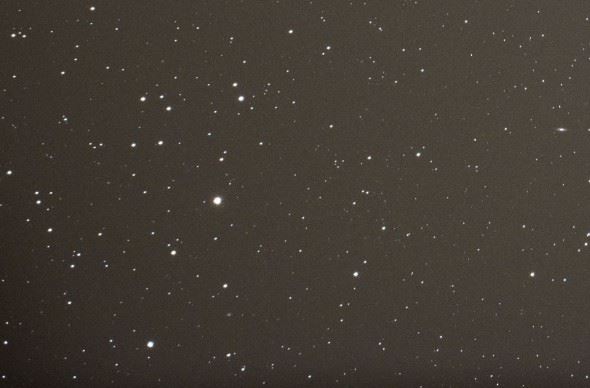 This is a corner crop of a single exposure and clearly shows the stars being “egg shaped”, and inspecting the rest of the image showed the stars stretching out around the central point. This is technically not an issue with the D810a but more with my own telescope, however it is worth keeping in mind if you want to connect the camera to a telescope and don’t own a Takahashi or equivalent. Below is the full image, which is a single 300sec at ISO 800 at native f/5.9. As you can see there is a fairly strong vignette which is the result of the 2-inch focuser, but with inclusion of calibration frames this could be controlled. 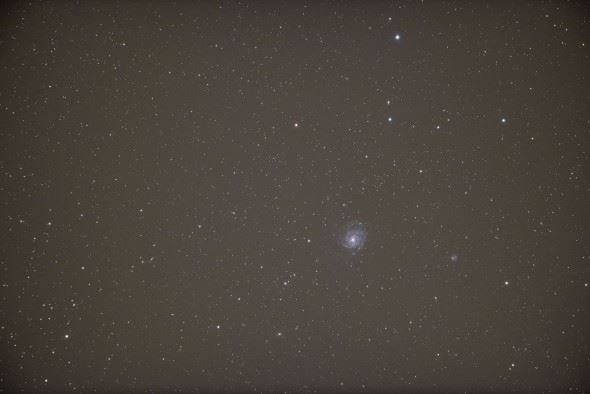 Another important thing with running a camera for deep-sky photography is being able to hook it up to a laptop. This is where my opinion of Nikon took a bit of a nosedive. As all you Nikon owners will realise, Nikon do not offer free PC control software – which, bearing in mind their main rival Canon does offer this, was a bit of a shock. I also wasn’t able to get their trial version to work – I think my firewall blocked it – and couldn’t get it to connect to the internet to register, no matter what I tried. Additionally my own software I use wasn’t compatible with the D810a and to get that working would have meant buying a new license at around £300. So, to capture these I installed another third-party piece of software that works with Nikon cameras (there are not too many out there).

Below is a stacked image of six 300-second subs (individual frames) with no calibration frames used. This is way short of the required exposure, which would probably be around three hours total, but does show that the chip used in this camera is very sensitive and under the right conditions could produce some good results.

This is a region known as the Virgo Cluster, and the image shows the top section of a chain of Galaxies known as Markarian’s chain. 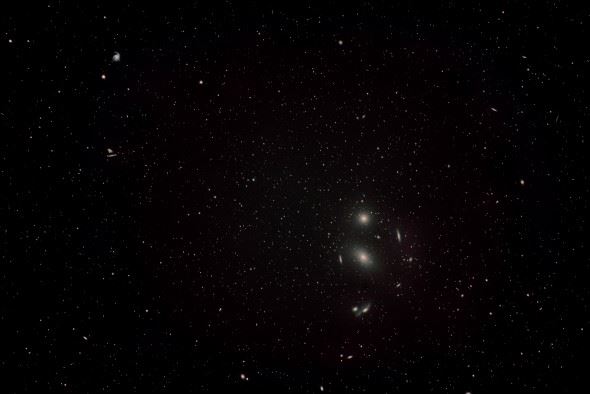 This camera has caused me a little confusion as I really couldn’t work out what its purpose was. Nikon had priced this camera right amongst a well-established specialist market, without including features like coolers or supplied PC control software, ones that astrophotographers will immediately look for.

It took a while but I have now realised what this camera is all about. It is not trying to replace the traditional CCD cameras that we currently use for deep-sky work, but is just a superbly designed low light, wide-field camera, that can be used for basic deep-sky work. Will this camera ever replace my CCD camera? No. Would this camera replace my normal DSLR? Yes, without a doubt, but I would have to replace the standard lens with something a lot better and faster, as this chip is not very forgiving on your lenses and the 18-35mm is not the best match for low-light work.

If you are looking for a DSLR that masters low light work, then this is for you, but just remember that if the astrophotography bug gets you, you will be buying a separate CCD camera to use alongside.

If you want to see more images captured with this camera, please check out my Flickr album.

Astronomy Photographer of the Year 2016: How to Impress the Judges