Arctic Adventures with the D3s

One of the most exciting & challenging shoots I’ve ever done was during my trip to Lapland, Arctic (well about 250kms north) in Sweden. The trip came about when I was booked to photograph a wedding at the world famous Ice Hotel in Sweden. This was roughly the same time when the Nikon D3s was launched and was the perfect opportunity to test the camera for its high ISO capabilities in such low light and extreme conditions of as low as -30C.

I was specially excited about the use of the video on this DSLR. Initially I wasn’t too keen about video on DSLRs when they were first introduced, however, I now love it and am starting to enjoy it more and more. Prior to my visit to Sweden, I did photograph a wedding here in the UK with the D3s and the image quality at ISO 10,000 and 12,800 was stunning. So I wasn’t too concerned about the low light situation over there.

The trip involved photographing the a pre-wedding shoot and the wedding itself, a dog sledding tour on a frozen river and through the wilderness around Jukkasjarvi and a 4-hour Northern Light tour on snow mobiles and staying in the ‘cold accommodation’ for 1-night at the Ice Hotel. Yes I did sleep in a cold room at The Ice Hotel and I'm still here to tell the story. In fact, you get a diploma if you wake up alive in the morning! It was a fairly packed schedule within a 4-day trip to say the least.

The wedding took place in the Ice Chapel and was a traditional Swedish ceremony lasting about 30 minutes or so. The temperature inside the chapel and the Ice Hotel is no warmer than -5C, which incidentally is considerably warmer than the temperature outside. The coldest I experienced during this trip was -29C. After the service, the wedding party headed off to the Ice bar for some drinks, the family group shots, and after the guests have headed off to the ‘warm bar’, the shots of the couple and then the wedding breakfast. The whole wedding takes no longer than about 2 hours or so. Unlike a traditional wedding of say 8 hours, there is even more pressure on being organised and getting the shots which I’ve been paid for. 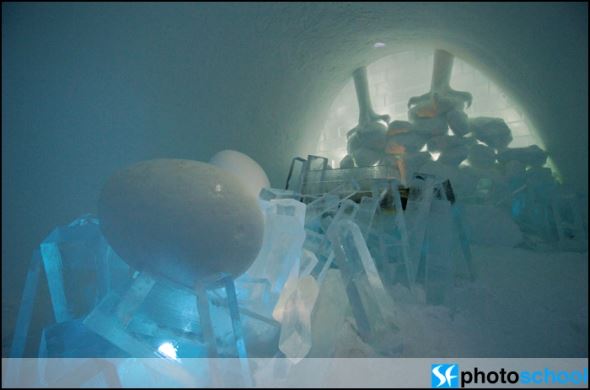 The amazing Art Suite bedroom at called 'Rest in the Nest' by Anna Sofia Maag. 3200ISO. The temperature inside the hotel does not get any warmer than -5C

My biggest concern was the batteries in the camera, but I’ve got to say that I did not need to change the batteries once during any shoot we went out to do. They pretty much lasted all day long.

Photographing inside the Ice Hotel was extremely challenging. The easy way would have been to put the flash on the hot shoe and fire away all day long. But that’s not what I did. I do use the flash a lot but not on the hot-shoe of the camera. Flash is one of the most creative pieces of kit you have in your camera bag. Use it correctly and you’ll get amazing results. I placed it on a light stand and either used an umbrella or a Lastolite Ezybox. These are easy to carry and go with me everywhere. I had the new 80 x 80cm Ezybox which I used for the group shots with the Nikon SB900 flashgun. Balancing the ambient light with flash is the key to getting really good shots.

Couple inside the Ice Bar

I was shooting on average around 3200-5000 ISO inside the Ice Hotel with a few fast prime lenses, the Nikon 85mm f1.4, Nikon 35mm f2 and the Nikon 50mm f1.4. I shot the ceremony with available light only, even though I was given permission to use the flash. Using flash would have ‘killed’ the ambience of the beautiful and unique setting. So don’t be scared of shooting at high ISO if your camera body allows you to.

Coming back to the group shots, my lighting kit is extremely portable, quick to set up and easy to use. I’m pretty much up & running in under 2 minutes. This is especially great in such a cold place where you don’t want the guests hanging around and getting cold while you take your time setting up the lighting gear.

After the group shots, I spent about 10-15 minutes with the couple and we went around the hotel and took their shots. Then we went to the ‘warm bar’ and shortly afterwards the wedding breakfast and then the day was over. I was pretty exhausted by the hectic activity and the cold conditions but it was worth every penny! I thoroughly enjoyed the wedding and is amongst one of my faves. 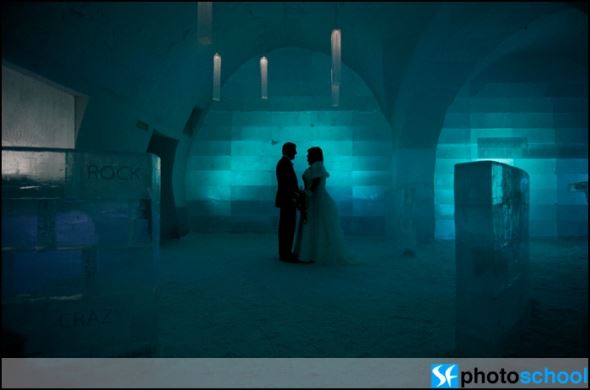 Couple inside the Ice Hotel. One of my favourite shots of the wedding

On a bitterly cold evening, our Northern Lights tour was arranged. But what, exactly, are the Northern Lights I hear you ask? The Northern Lights, Aurora Borealise, appear in a clear night sky as swirling rivers of greenish-blue light. They move and dance unpredictably; sometimes barely perceptible, then suddenly growing vivid. In simple terms, the auroras can be explained as an interaction of the solar wind and the Earth’s magnetic field. The phenomenon occurs when the particles collid with atoms and molecules in the upper atmosphere, transforming kinetic energy into visible light. The most intensive auroras occur at a height of about 100km and can be 10 to 30 km high.
Normally the Northern Lights can be seen virtually every clear night at high latitudes. We had to travel about 45kms on the snow-mobiles from the hotel to be able to see the lights. The experience of driving a snow mobile through the wilderness was pretty incredible. I was wearing 4 layers of thermals & fleeces, a jacket and then a snow suit, 3 layers of socks with snow boots and I was still freezing!
Setting up and photographing in complete darkness with gloves on was not ideal. There is no way the autofocus will work on any camera as it is so dark, the focus has to be set on Manual mode and then you set the exposure from experience. I was able to set the shutter at around only 6-8 seconds (10,000 - 12,800 ISO) and capture some amazing shots of the lights. I was pretty lucky that I managed to see them first time around. 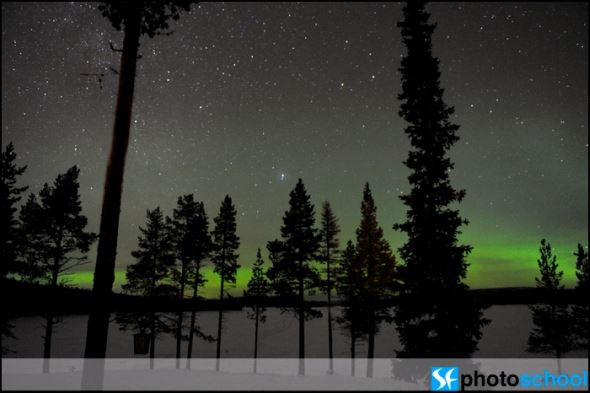 Northern Lights shot at 12,800 ISO. I was very lucky to see them the first time we went out on the tour. The tour took 4 hours on snow mobile

Regarding the Nikon D3s itself, the camera handled perfectly in such extreme and cold conditions. I love the high ISO performanace, and the 12.1MP is ideal for the kind of work I photograph. The ‘D-Movie’ adds a new dimension of creativity with HD quality. External microphone can be attached for stereo recording. Using shallow depth-of-field provides beautiful blur on the background. All in all, an incredible experience of a lifetime with, in my opinion, the best DSLR camera around at the moment.