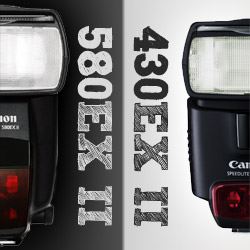 When investing several hundred pounds on a flashgun for your Canon camera it is worth ensuring it has the features you are going to need at the same time as ensuring that you are not paying extra for features you’ll never use.

I own both the Canon 580EXII Speedlite and the Canon 430EXII Speedlite and I am always putting them through their paces. It is fair to say that on any one of my shooting flash workshops each unit will be firing at or near it’s capacity well over 1000 times in just one day. Both these flashguns are built to last and are thoroughly dependable. So what are the differences between them, and how do they affect the shot or shooting style?

In manual mode the flash power of both Speedlites can be adjusted in 1/3 stop increments down to 1/64th power for the 430EXII and 1/128th power for the 580EXII. I set both units to Manual and remote triggered them with my Canon ST-E2 transmitter to look at their light output power and shape. 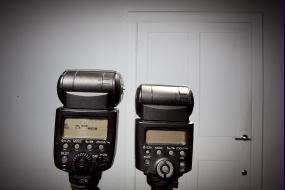 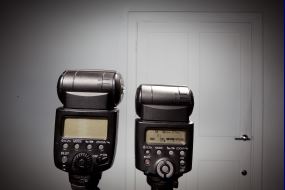 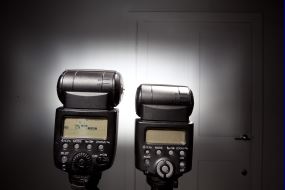 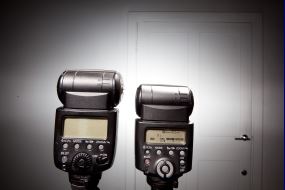 You can see from the pictures how much tighter and more concentrated the Canon 580EXII Speedlite beam pattern is at 105mm compared to the Canon 430EXII Speedlite. The shape of the beam pattern with the flash ‘zoomed in’ is important for my style of shooting but not to those of you who work with the flash on the camera. Both the zoom patterns at 24mm were similar and light coverage was good with a similar drop off at the corners of the frame. Incidentally the lens I used for these test shots is a 24-70mm f/2.8 and it was set to f/16 on my Canon EOS 5D Mk 2 camera in manual exposure mode.

Now although there is a significant difference in light output at full power between the flash units, for the vast majority of pictures that most photographers take using flash, the TTL cuts in before full power is reached and no difference will be experienced.

(TTL refers to ‘Through The Lens’ metering and is a system that utilises a sensor in the camera to measure the power of the flash as it lands on the imaging device and it then controls the flash power output or burst duration using a system of communication between the camera and flash. It sounds impressive and it is.)

The Canon 430EX11 Speedlite fits neatly in the hand and is considerably more svelte than the Canon 580EX11 Speedlite. It is lighter too and this may well be something to consider if you intend to do a lot of hand held flash work.
Both flashguns are equally quiet in operation. There is the occasional gentle murmur of the zoom motor and at or near a full power flash there is an audible pop as the flash unit discharges. The 430EXII pop is crisper and a bit louder than the 580EXII.

The Canon 430EXII Speedlite is billed as having a faster recycling time and I found it to recycle in just under 3 seconds to full charge after a full dump of flash at 1:1. The Canon 580EXII Speedliteon the other hand took just over 4 seconds to recycle using the same batteries. I repeated the test several times with similar results. I suggest you invest in NiMh batteries and a charger for whatever Speedlite you go for. NiMh batteries have a lower internal resistance and will recycle your Speedlite a lot faster than Alkaline batteries. I change my 2800 mAh NiMh cells about once a year and they get used and charged about three times a week. 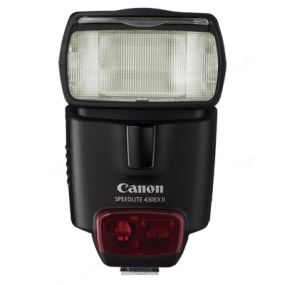 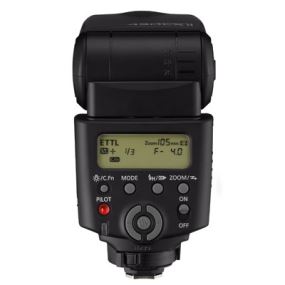 The controls on both Speedlites are nearly identical and once you have learned how to use one of them you already know how to use the other. The same team designed the menu systems too. There are some menu differences though, the principal of these is that switching the 430EX11 Speedlite between normal mode and slave mode is much faster than with the 580EXII Speedlite because you don’t have to choose between master or slave. This might sound trivial but in reality it is a godsend. Because the 430EXII is not configured to be a master flash unit, it keeps things simple within the menus.

A master unit is one that sits on the camera and tells all the other flashguns (slaves) what to do. The Canon 580EXII Speedlite can be configured to be a firing or non-firing master or indeed a slave. The Canon 430EXII Speedlite can only be a slave unit. If you expect to only use one flashgun at any time, have the Canon ST-E2 or intend to buy the new TTL Pocket Wizard system this will not be of consequence to you.

One of the advantages that both the Canon 580EXII Speedlite and the Canon 430EXII Speedlite have over their predecessors is that their flash menu functions can be set on camera using the cameras own sophisticated and well annotated menu system. If you’ve ever fiddled with the wireless TTL commands on a Canon 580EXII Speedlite you will understand what a good a technology implementation this is. (Check your cameras compatibility with this function)

The custom functions of both Speedlites can be accessed and set from the camera if you have one of the latest pro models. This is far easier than trying to remember what custom function 07 is and weather it should be on or off as was the case with previous Speedlite units. Once set, the custom functions remain set irrespective of what camera the Speedlites eventually gets used on or if the batteries get removed etc.

The focus aid illuminators on the front of the Speedlites are worth a mention because the Canon 580EXII illuminators cover more focus points than the ones on the Canon 430EXII. If like me, you either use the central focus spot or one of the principal 9 focusing spots then this will be of no consequence. 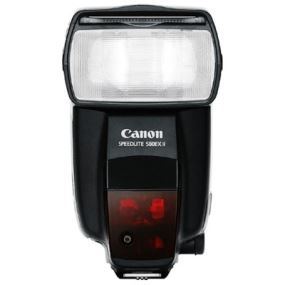 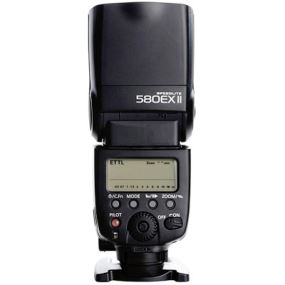 The 430 EXII has exactly the same rise and fall weather seal mechanism as the 580 EXII Speedlite but without the rubber seal. It’s the bit that costs pence to produce and I’ve no idea what Canon were thinking about when they forgot to put it on the 430EXII. The good news is that the rubber seal from the 580EXII fits the 430EXII. It’s worth buying a seal as a spare part and fitting it yourself in seconds. It just pops on and is really easy to attach. Your local camera repair shop should be able to order one for you.

What ever Speedlite you go for I recommend that you buy the Sto-Fen flash diffuser at the same time as the deals on offer are excellent. A Sto-fen doesn’t soften the light from a Speedlite it merely makes it omni directional. This is great for interior portrait or wide area lighting. It also helps if you want to use the flash off camera hand held as the direction and positioning of the flash becomes less critical. Think of it as holding up a light bulb rather than a torch.

Until very recently, before the introduction of third party radio frequency or RF remote command systems for Speedlites, RF noise from Speedlites has not been an issue. It is now though, and the Canon 580EXII is one of the biggest culprits. It really needs a pair of lead underpants in order to work well with certain RF TTL trigger systems from companies like Pocket Wizard. Radio triggering has the advantage of not requiring line of sight to work and is set to be the future of remote flash firing. The Canon 430EXII has no problem at all with RF noise and will work really well with all systems.