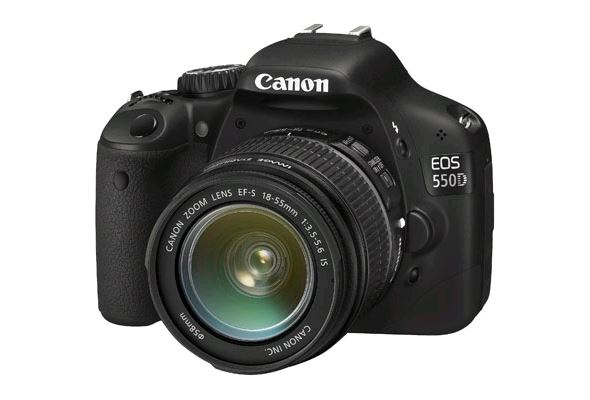 This is how the two bodies compare in table form:

The Canon EOS 550D uses a 9 point AF system, with the centre point being high precision f/2.8 cross type. In fact, the Canon 550D has the ex-pro AF system that the 20D used to use and it's not that far off that of the 50D either, so it’s a good AF system. One thing missing is the AF-adjust you get on the next class of cameras. I'd like to see this included as it would save Canon the hassle of having to do AF-adjusts under warrant! Maybe it will be added? Or maybe it's a "feature" to make you choose the next model up?
There are a couple of areas where you can tell that Canon has saved money; one is the viewfinder - this is no 1-series camera, but then the price tag is substantially different. That being said it feels even more solid than the 500D this camera replaces - and way better than the 300D of yore! Well done Canon – the 500D feels solid in the hand. Canon don't rate the shutter on this model (they rate the shutters on the 50D upwards to 100k+). I've never worn out a shutter yet though, and even if it does fail it's not that expensive to replace... All the detail - double yellow lines using the Canon 550D.

Have I mentioned the screen yet? It’s the best on a dSLR to date and a real joy. For some reason this is the first camera that has a screen with the same aspect ratio as the sensor so you don't get black bars on your photos on the back when viewing. Why didn't others think of this first? Genius! The screen is usable outdoors in direct sunlight, though it lacks the sensor of the 5D Mark II, which auto-adjusts brightness. The new buttons being bigger and much easier to press are great and I wish all my Canon’s had these buttons. 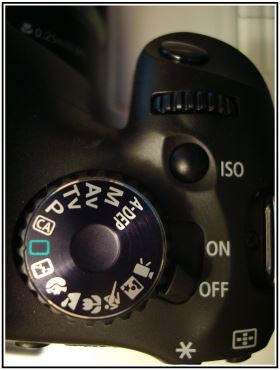 Canon has improved the ergonomics on this camera by making the buttons wider and easier to press with gloves on - much appreciated in this weather! I expect to see this on new models as they come out too. On my walk around with the camera the metering seemed pretty spot on - I've not had many issues with Canon's 35 zone metering and the 63 zone metering seems just as accurate (it’s not as high as Nikon’s 1005 zone on the D3s, but it seems to work just as well). I think if you shoot on full auto then you'll like this metering as much as any other before it - and giving you +- 5 stops of EV compensation I’m sure must please someone; 5 stops is a lot of compensation to be dialling in – the 550D now has the most compensation of any EOS camera - even more than 1-series cameras. 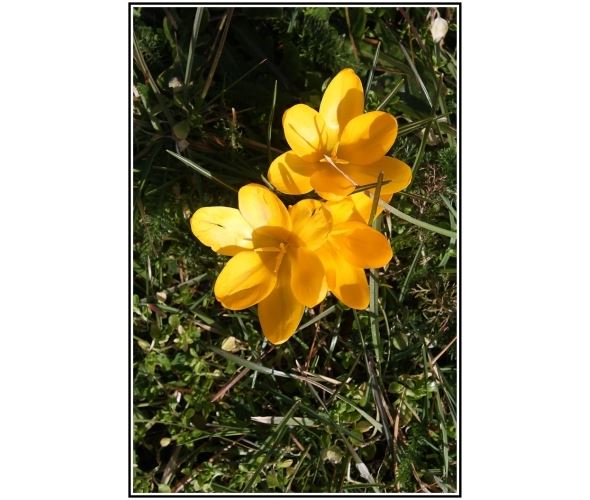 So we've covered the basics - now down to the interesting bit: What's the image quality like? The sensor is very similar to the EOS 7D - but it's not exactly the same. I haven't got a 7D to compare it with but the 550D produces very nice files indeed, plenty of detail and very usable at all ISO's. In fact if you wanted a 7D for the resolution you now have a great alternative with, in my opinion, better video options and a better screen to boot. The image quality from this little Canon 550D is great and you get the now standard picture styles too, which you can customise as much as you want. You can also download some special ones from the Canon Picture Style website. Take a look at some of the sample images to judge for yourself.

For me, video was one of the main reasons to upgrade to the new body - full HD and not the 20fps version. This gives full PAL (Phase Alternate Line) support (i.e. 25fps) but also lets me record 30fps (well 29.97) for NTSC (National Television System Committee) - so you get the choice now. This is now the best ‘specc'd’ video dSLR. You even get a 640 crop mode that enlarges the centre portion of the sensor for extreme close-ups! You get full manual control should you want it - quick AF/ live AF and of course the face AF which identifies faces. Initial impressions look good and it's nice to have the options. I'll be glad when this feature is added to my 5D Mark 2. I can even share the stereo microphone with my 5D Mk II - filmmakers on a budget could love this bad boy! Here are the options you get and the film speeds you can choose: 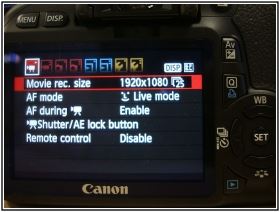 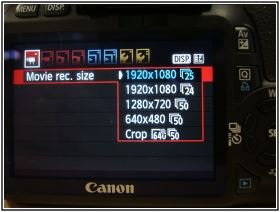 The Eye-Fi range is fairly new to the market and simply uses your wireless network to automatically send your photos where you want them. They allow you to instantly upload shots to online photo-sharing sites and some have the option for you to geotag your images.
The Canon 550D is the first camera to give you the option to see your images are being transmitted successfully and what settings you've put on your Eye-Fi card are. Here are the new screens on the 550D so you can keep an eye ;-) on what's happening. 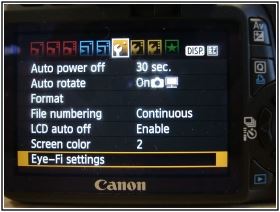 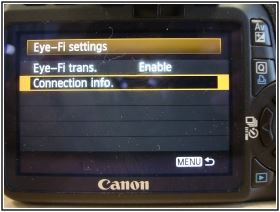 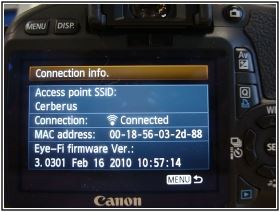 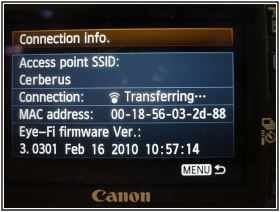 When your image has been uploaded you will see a little wireless symbol by the image details. So does it work? Simply yes! It's nice that Canon have added this feature in - now if you could set up the cards in camera that would be great! Alas you cannot do this. Still if you want to use wireless in your 550D - this is the easiest way to do it. 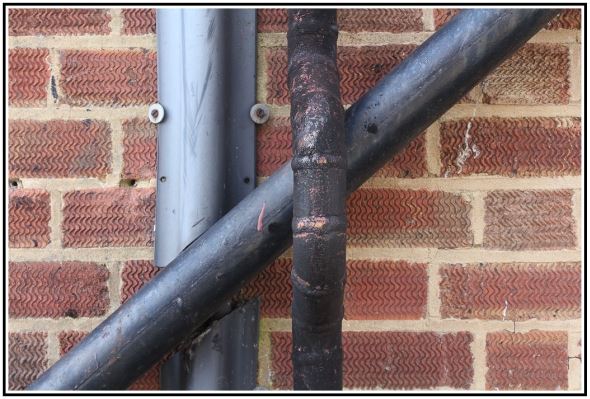 Up close and personal with a nearby wall. Taken with the Canon 550D.

As I mentioned earlier in the review I've had every previous entry level Canon camera except the 1000D and can say that this seems definitely to be the best one yet. The video in particular is fantastic and even manages to include a crop mode not available on any other EOS. Canon has to be given credit for including such great movie mode on this camera. If you want more speed then you'll want the EOS 7D, which has Dual Digic 4 and a fancier 19-point autofocus that is better at tracking (although the 550D is still pretty good), and it can shoot at 8fps. If you want even more resolution and even more impressive high ISO, then the Canon EOS 5D Mark II is the camera for you - this beast has over 21 megapixels and an increased ISO range. It's slightly faster at 4fps and has a better AF system.

My main use of this camera is for everyday use and to take on holiday with an 18-55/55-250/50mm lens kit to cover any eventuality. For this it must be light, work quickly and have great image quality. All the above fits inside a nice Lowepro Toploader Zoom (TLZ2). I think as a general use camera it will be great. As I said earlier in this review I've had every XXXD that has come out and this 550D is going to stay in my bag as the best camera so far! The image quality is top notch - the ISO range is good. The ability to set the highest ISO that auto-ISO goes to is a useful thought too. The buffer, although smaller, is adequate for a camera of this class - if you're shooting sports then 34 JPGs is enough @ 3.7fps. The JPGs are nice and punchy out of camera and I have to say so far I'm pretty happy. The Canon EOS 550D is a nice, solid camera.

Best value new Canon to date. A worthwhile upgrade over the Canon 500D and a real alternative to the EOS 7D for the price conscious.