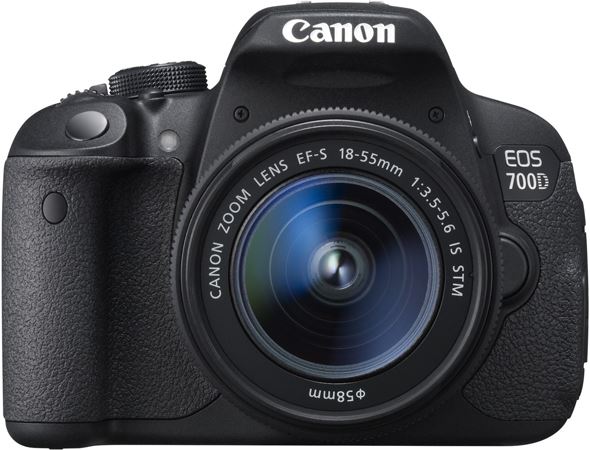 Canon has a long-standing reputation for excellence in the field of digital imaging, pioneering an array of impressive technologies that continue to evolve with each new release – be it a DSLR or a compact.

The Canon 700D’s headline features may not differ all that much from its short-lived predecessor’s, but that’s not to say it's lagging behind the competition. The camera appears to have inherited the EOS 650D's 18MP CMOS sensor, 9-point AF sensor and articulated touchscreen, but delving a little deeper we find Canon has applied a number of tweaks to each area – alongside others – to improve the overall performance of what was already a solid camera.

The rise of the compact mirrorless camera – offering DSLR-like image quality in a more portable format – means that entry-level DSLRs can no longer rely solely on decent image quality to entice upgraders over their high-performance, pint-sized competitors. Manufacturers have to work harder to incorporate increasingly more advanced features into their DSLRs across their entire range, adding incentives to attract prospective buyers. 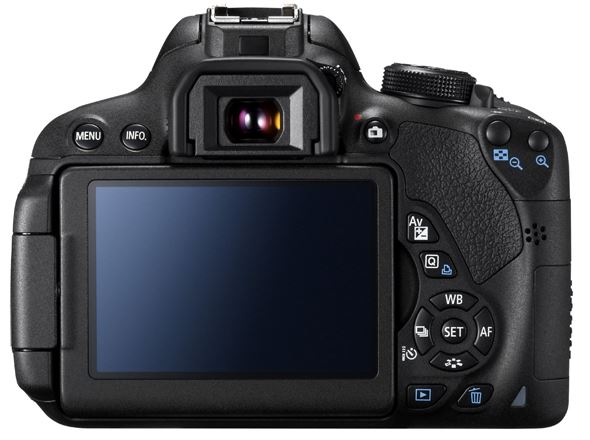 The camera’s ability to shoot at a maximum sensitivity of ISO 12,800 (expandable to include ISO 25,600) is also impressive, as is the useful facility to apply in-camera lens-specific corrections for issues such as chromatic aberration and vignetting (JPEG only). HDR Backlight and Hand-Held Night Scene modes are also handy additions that help to overcome the challenges presented by tricky lighting conditions, combining several images recorded in quick succession to produce the final result. There’s also a Multi-Shot Noise Reduction mode that compiles four frames for a cleaner final result. 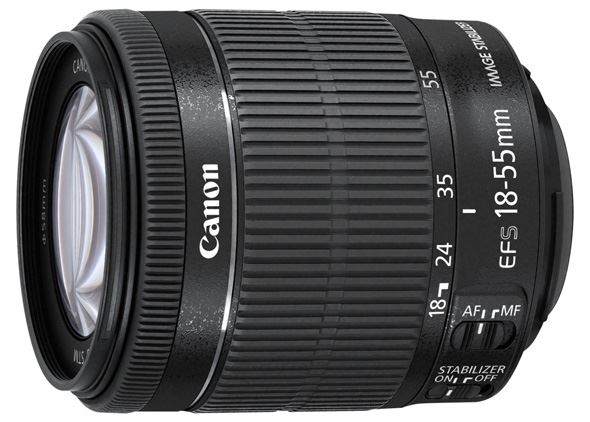 The Canon 700D also benefits from the newly-launched EF-S 18-55mm F3.5-5.6 IS STM kit lens. A highly attractive prospect to upgraders, the new lens promises an improved performance over the older version supplied with the EOS 650D through faster and more accurate movie focusing and up to four-steps of image stabilisation, together with an improved close-focusing distance of 0.25m and a circular seven-bladed aperture for attractive bokeh.

Despite its entry-level status, the Canon 700D looks and feels like a higher-end DSLR, albeit a shade smaller than its big brothers. In the hand the camera feels well-balanced with the new kit lens attached; just weighty enough to instil confidence in its durability yet still light enough to take out and about on day-long excursions. Compact System Camera (CSC) rivals still have the advantage when it comes to portability, but the level of comfort provided by the 700D’s ergonomically shaped body – including neatly sculpted and rubberised front and rear grips – is something that is hard to replicate with a smaller camera. 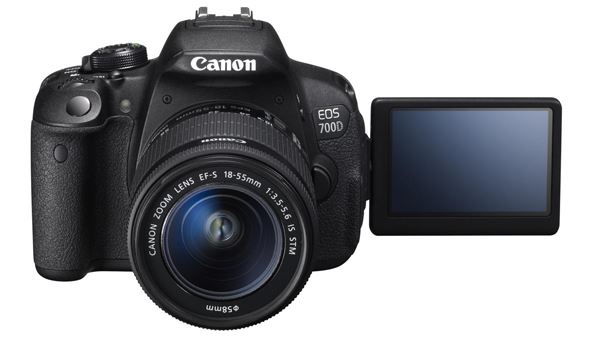 The versatility offered by the flip-out screen on the 700D adds to its appeal as a versatile all-rounder, providing Live View and movie enthusiasts in particular with another reason to love the way this camera handles. The screen itself offers a pleasingly detailed display with a decent anti-reflective coating and impressively wide viewing angle, even with it in the conventional position, flush against the back of the body. Furthermore, the excellent touchscreen offers an alternative means of operating the camera that will appeal to those upgrading from a compact with a similar interface, with impressive sensitivity and the option of positioning the focus point by tapping the screen in the desired location. 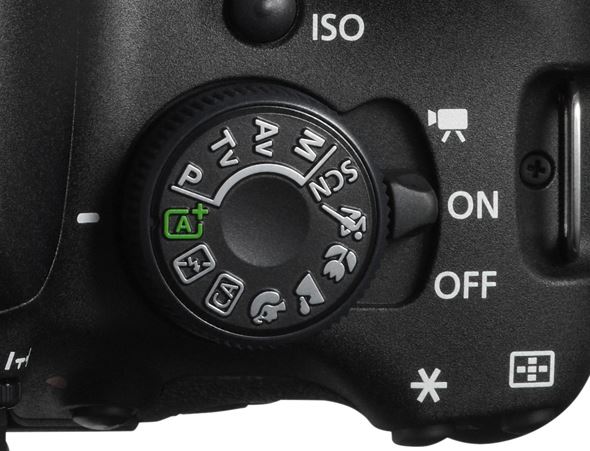 Photographers that prefer to stick the conventional means of camera operation are also well catered for with a comprehensive set of physical controls intuitively positioned across the camera’s matt, black outer surface. The newly-designed mode dial (above) offers fast access to the all-inclusive exposure modes on offer, while dedicated buttons arranged on the rear panel allow users to quickly apply exposure compensation and alter settings like the white balance, AF mode, Drive mode or Picture Style, among others. 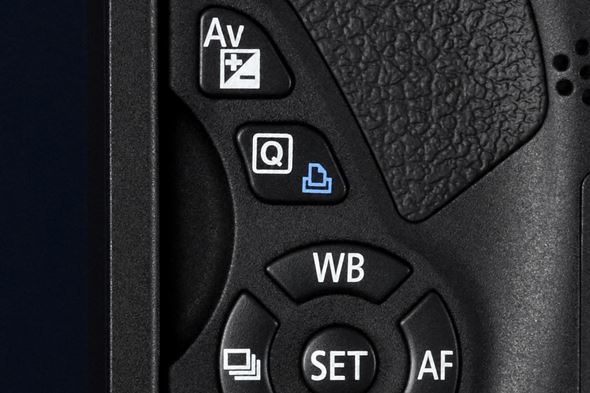 The useful proprietary Canon ‘Q’ Menu button is also present on the rear plate. Pressing this calls up an interactive on-screen set of shortcuts to key settings and features — another area where the touchscreen comes in handy with regards to speed of operation.

The Canon 700D is quick to start up with a flick of the power switch, and the screen offers up your current settings almost instantly, automatically switching itself off when you lift the camera to your eye if you’re using the large and bright built-in optical viewfinder.

When focusing, the time to acquire a positive lock is equally as speedy under normal circumstances, with the camera’s 9-point AF system providing a decent level of frame coverage and the previously-mentioned touch screen AF point positioning feature adding another level of versatility to this camera’s handling. Subject-tracking when photographing moving targets is pretty good on the whole, with the 700D’s respectable 5fps burst mode helping action photographers to capture events as they unfold.

The processor does take a little time to write the images shot in this mode to the memory card, although this aspect of the camera’s performance will vary according to the type and speed of your storage media and size/format of the images you’re shooting. The same goes for when using the multiple frame-combining features such as long-exposure noise reduction, HDR Backlight Control and Handheld Night Scene (although this is to be expected due to the large volume of data that the processor has to handle in order to produce the final composite image in any one of these modes).

Back to the AF system: the Canon 700D puts in a pretty snappy performance across a variety of situations, only tending to lag behind a little when you’re trying to photograph particularly low-contrast or dimly-lit scenes. The latter occasion is when I find myself hankering after a dedicated AF-assist lamp – one of the few omissions from the 700D’s feature-set that could really have done with being included. Instead, faced with a difficult-to-detect subject, the camera’s built-in pop-up flash springs to life and fires off a few pulses of light, aiding the AF system in acquiring a lock. While the system works, it’s a great deal more obtrusive than an infinitely more subtle AF illuminator and therefore not ideal in all situations. This point aside, the 700D’s AF system performs well, with an impressive level of speed and accuracy.

Photographers familiar with the older Canon EOS 650D will find themselves in familiar territory with the 700D's image quality. Noise appears well controlled throughout the lower end of the camera’s sensitivity range, with images only really starting to suffer at around ISO 1600 and above. Detail retention is pretty good across the board, although as you’d expect, the very top settings do exhibit a noticeable degree of noise, some colour distortion and greater loss of fine detail. All in all however, the 700D’s performance in this area impresses, being on a par with most of its similarly-priced competitors.

Dynamic range in JPEGs matches that of the 650D, with additional scope to widen the range of tones captured using Canon’s proprietary Highlight Tone Priority option, or the previously described HDR Backlight Control feature. I did find that these two features came in useful on a number of occasions where the camera sometimes struggled to cope with high-contrast scenes. While I might add that some of the competition fares a little better in the dynamic range capture stakes, Canon’s wise decision to equip the 700D with the means to improve its own results without resorting to post-shoot processing does help to level the playing field somewhat.

The level of sharpening applied to JPEGs in-camera produces pleasingly detailed results under most circumstances, although the odd shot or two occasionally demonstrated slightly over-zealous sharpening for my taste. Shooting Raw files and applying your own sharpening post capture yields the best results, and leaves little to complain about here.

Full HD movies shot using the Canon 700D’s video mode match the output of the Canon 650D, with faithful colours and a pleasing level of contrast, as well as a very respectable performance at high ISO sensitivities. The camera’s metering system also performs well, producing accurate exposures in most everyday situations. Where necessary, however, exposure compensation can be applied to ensure you get the results you want, plus more advanced videographers can operate the camera in Manual mode for full control over the shutter speed and aperture settings. Perhaps the only thing lacking here is the facility to shoot in Aperture or Shutter priority modes, in order to aid newcomers in getting to grips with specifying their own settings while filming.

Canon may have only made a handful of changes to the EOS 650D to create this new model, but the latest additions to the already-impressive feature-set held by its predecessor prove their value in practice. The new in-camera editing options all perform well, and help to enhance the results from the 700D without having to go near a computer. The user-interface is particularly worthy of note, with Canon creating the perfect combination of touchscreen and on-body controls – both of which enable fast camera operation whether you’re a beginner or more advanced enthusiast.

Image and Full HD video quality from the 700D upholds Canon’s superb reputation in this area, with accurate exposures, faithful colours and a pleasing level of sharpness featuring in shots taken under most everyday shooting conditions. Noise is well controlled throughout the camera’s sensitivity range, with particularly impressive results possible if you opt to shoot Raw files (for stills) and apply noise-reduction post-shoot.

A joy to handle and easy to use, the Canon 700D AF system is one of the few areas that has scope for improvement. While AF performance is, on the whole, pretty good, its speed and precision isn’t quite up to the same level as that of its CSC rivals when operating in Live View or video mode.

Josie Reavely is a Hampshire-based technical journalist. You can view more of Josie's work on her website