It's small, it's fast and it's very tempting indeed – the Canon EOS M6 has arrived. Matt Higgs takes a first look review 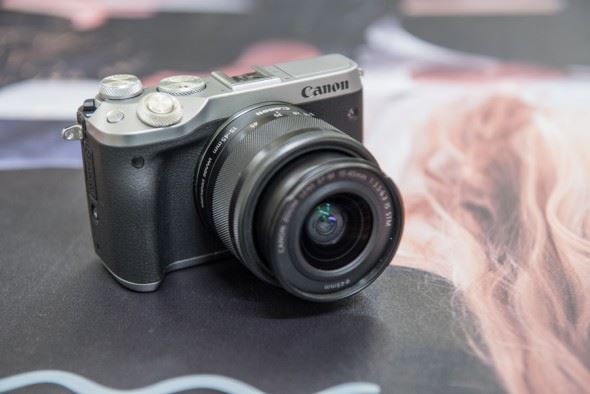 Canon has today announced a new enthusiast CSC to sit between its entry-level M10 and flagship M5 models, the EOS M6. Canon claims this new model packs the same speed, quality and performance as a DSLR, but in a conveniently sized package that photographers will want to take everywhere. Let’s check it out…

Watch our hands-on preview video of the Canon EOS M6

Like the M5 it sits under, the M6 is fitted with a 24.2MP APS-C-sized CMOS sensor. This sensor will provide plenty of resolution for prints that are more than large enough to meet the demands of most prospective users.

Processing the 14-bit RAWs and JPEGs captured by the device is a DIGIC 7 chip, which is also the same as that which was found in the M5. This pairing provides an ISO range of 100-25,600 and a top burst shooting rate of 9fps with focus fixed, or 7fps with continuous focusing.

An electronically controlled focal plane shutter allows the camera to shoot at shutter speeds of between 1/4000sec and 30sec.

The M6 sports Canon’s EF-M lens mount, allowing it to be used with the highly portable EOS M optics, or with a lens from the EF and EF-S ranges via an adaptor, which is available to purchase separately. 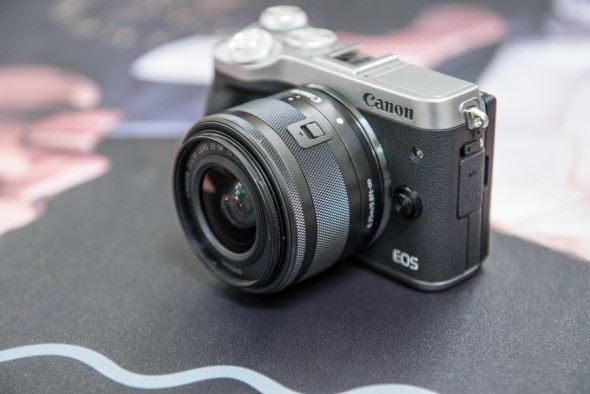 Able to record Full HD video at frame rates of up to 60fps, the M6 is also a capable companion for the creation of high-quality video clips.

As the camera benefits from in-camera 5-axis digital image stabilisation, pro-looking shake-free footage is made much more achievable when shooting handheld, and best of all, it works with any lens attached.

Thanks to a 3.5mm stereo jack, the audio quality captured by the device can also be improved with the use of an external microphone.

This system operates to -1EV (the M3's would only operate down to 2EV) and provides one-shot and servo AF with face/tracking options.

One of the greatest differences between this camera and the M5, and one of its similarities to the older M3, is the lack of a built-in viewfinder.

While the top-of-the-line EOS M5 has a 2,360K-dot OLED, composition on the M6 is only possible via its 3-inch, 1,040K-dot display. Tiltable upwards by 180° and downwards by 90°, this display makes low- and high-angle shooting with the M6 a more comfortable process, while its touch screen allows for touch-focusing (especially useful during video shooting for smooth focus push/pull transitions), touch-shutter-release and quick menu operation.

An optional external EVF (EVF-DC2) is available to buy, and can be attached via the camera’s hotshoe.

As we’ve come to expect on modern cameras, the M6 has a full range of connectivity features, which enable remote shooting and file transfer via a smart device. Users have the options of Wi-Fi, always-on Bluetooth, and NFC for speedy connection establishment.

A popup flash can be found at the top of the camera, carrying a guide number of 5 (ISO/metres), while the EOS M6’s battery life is 295 shots from fully charged when using the LCD – 45 shots more than the M3.

Measuring 112 x 68 x 45mm and weighing in at a mere 390g (including both battery and memory card), the M6 is both impressively lightweight. Small enough to fit in a large jacket pocket, it fulfils Canon’s description of a perfect ‘Creative Companion’.

The lack of an EVF helps put this device much closer in terms of its size to the M3 than the M5, and its control system is also pretty similar.

Thirteen of the device’s buttons and dials can be customised for tailored operation to suit the user’s personal shooting style. 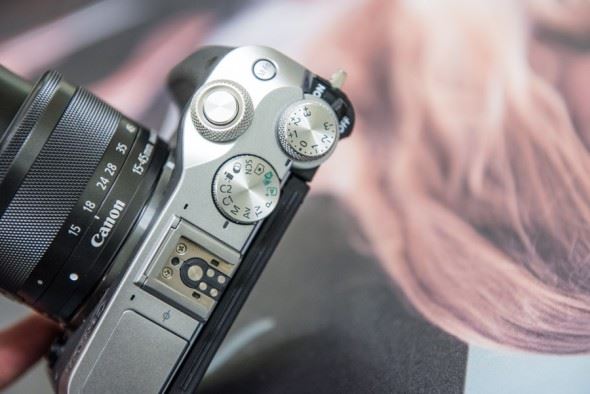 Taking many of the M5’s flagship features and placing them into a body that’s much closer in design to the M3, the M6 promises an impressive performance in a highly portable package.

With its APS-C size sensor, DSLR-rivalling image quality is possible, while the lack of an EVF helps the device to maintain a competitive price tag.

This is a great all-round device that would make an excellent choice for many taking a step up from a bridge camera or looking for a carry-everywhere second body.