Space - who cannot be awed by a dark night sky awash with stars? How we gaze at them, imagining the Navigators and Great Explorers of ages past, and in wonderment at how they used them to find their way home. How comforting the thought, that no matter in what Hemisphere you’re in you can look up and see familiar stars like old friends twinkling back at you, and how we wish we could regale people with exotic, romantic stories about how constellations got their names…

Ok so maybe that’s just me, but I do have a genuine belief that when people get interested in astronomy they begin a journey of awe, wellbeing and a desire for knowledge, and like me, would like to know more than the handful of constellations, stars and planets that I can name by sight, but lack the time to get out there with a planisphere and do that hard graft.

Well this is where the SkyScout from Celestron comes in.

To be honest I was a little skeptical of the SkyScout when first told of its introduction here at Wex. What can it do that a certain prominent Search-engine’s free app can’t I wondered, “A lot more” I was informed, “and easier and better!”

So, a fair bit of hype then? Let’s get on with the review. 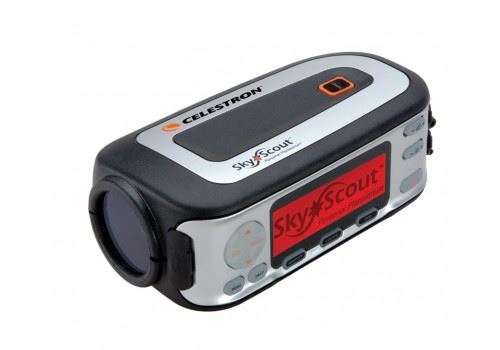 Introducing the SkyScout from Celestron

First off, what’s in the box?

The SkyScout comes in a well packaged box, containing not unsurprisingly, the SkyScout itself with lanyard, a set of earphones (for it’s audio output) a USB cable to allow for updates as they are discovered, (say a Near Earth Object, knocked out of its orbit and heading towards us on a collision course which you need to view so you know which direction to run!) a well constructed padded case with neck strap, and CD-ROM. So in all, a fair amount but at least what you would expect for the money. Now the SkyScout itself retails for around the not diminutive figure of £235*, so there must be more going on that at first appears? More pressure to add to the hype then, and to be fair the SkyScout gives as good as it gets.

The spiel for the SkyScout is that it uses advanced GPS technology to be able to identify stars, planets, constellations and more just by pointing it at the night sky. It can then deliver an audio and visual presentation of the target. It can also locate over 50,000 celestial objects from its database with information for each. I can go on listing its spec, but that wouldn’t be a review, it’ll be a product specification, so what were my first thoughts once I had my hands on it?

Taking it out of its protective sleeve, I was mildly surprised. It felt well made and not all plastic-y as I had imagined. Having a thick rubberised ABS body, solid chunky rubberised buttons which almost gave a satisfying ‘thunk’ when pressed, with thick well recessed port covers in the same rubberised finish. You could be forgiven for thinking it was weather-proof, although I wouldn’t suggest using this in the rain. Which you wouldn’t anyway, as it’ll be cloudy, and you need to be able to see the stars.

It looked easy to use too, and I could get the gist just by looking at its clear, well situated buttons which glow in a night-vision protecting red, as does its display.

It wasn’t heavy either. I know solid plus heavy usually implies quality, but you wouldn’t want to be holding 2kg out at arms length for any amount of time, so thankfully this comes in at an arm friendly 430 grams, that just 6 ½ Mars bars, or 5 if you're used to king-sized! 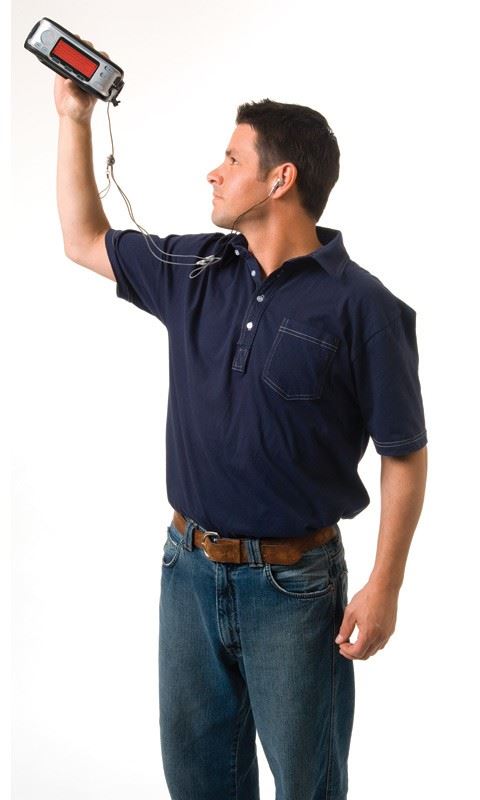 So after the obligatory 2-3 days wait for a clear sky, which happens whenever you buy anything with the word “astronomy” associated with it, it was time to get out and test the SkyScout.

I loaded the batteries (two AA) into their shields, which helps stop interference with the units sensors (another sign of a well thought out product) and waited a few minuets to get a GPS fix. After that, a few minutes more clicking through the menu system and I was confident I knew enough to be able to get started.

Now you can use the SkyScout in one of several ways. To start, you point it at your celestial object of choice, looking through two sighting lenses a bit like a monocular. These lenses aren’t magnified so you hold it at arm's length and press the ‘Identify’ button. At which point it will give you an option from a list of potential targets.

Now I know at first this may seem a cop-out - “it didn’t identify the target” you could cry! But think, if you take a straight line from yourself out to the sky, eventually it's going to pass, well, millions of objects along that line if you carry it out for long and far enough. What the SkyScout does is list the nearest, likeliest objects first. I tested this on a couple of the planets that were out that evening and sure enough they came up first. Anyway, once located, you can then select from the menu either audio or visual data for the located item.

The second way you can use the SkyScout is to select an object from its database. You can do this though a number of current conventions, such as SAO number, Caldwell Catalog, Messier list or NGC number. So, say you heard about 51 Pegasus B, and wanted to see where it’s located, or always wanted to know which star in the constellation of Orion Betelgeuse formed, the SkyScout can point you to it. (Databank spoiler alert! Betelgeuse is about to go Supernova within the next 1000 odd years so keep an eye out!) Whatever you wish to view, just select it from the menu and then when looking through the lens you will see small red arrows indicating which direction to move. Following these eventually takes you to your object of choice and a full ring of arrows confirms when you hit the target, whence again you can select the data if you wish.

A third way to use the SkyScout is to select “Tour of the night Sky” whereby it will take you on a tour of the 20 best night sky objects for your exact date and location, again with full data for each.

So far it's pretty impressive, but it can do more. Within the SkyScout’s database is also a guided tour of 88 constellations, a 6-part audio lesson on astronomy, a glossary of popular astronomy terms, biographies on some of the world’s greatest astronomers and information on comets, man-made satellites and extra-solar planets. So there's a well backed up database and catalogue, plus with its USB and SD card slot, it provides the ability for its catalog to be updated, extending its usefulness somewhat. 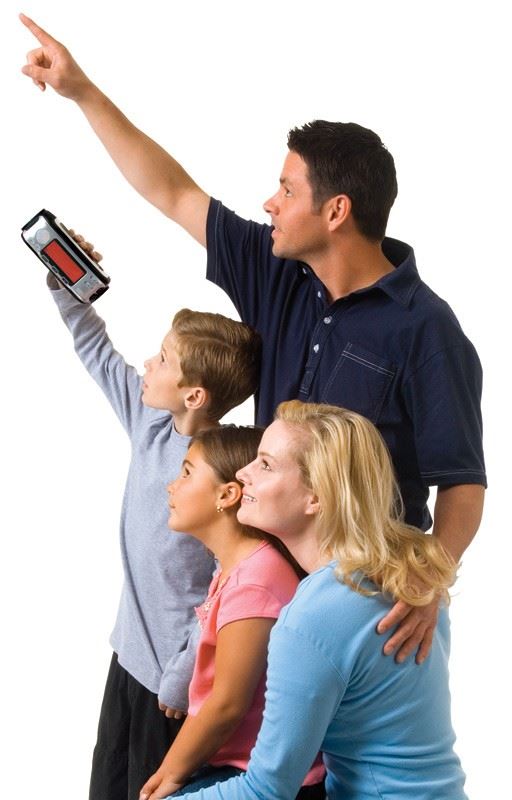 The SkyScout is great for getting kids interested in astronomy too

So again, pretty impressive and it's starting to more than live up to its hype. So anything else, accessories? Well certainly yes. There are two pre-loaded SD expansion cards available “Astronomy for Beginners” and “All about the Stars”. There’s an external speaker, although I was in two minds about this. At first I wished it had one built in so the audio could be shared by several people at once, but then you wouldn’t necessarily want this if you were on your own (which is where the headphones come in), but it would be nice to be able to switch between the two without having to buy an additional speaker. There is even a connection kit to be able to connect the SkyScout to one of the computerised Celestron telescopes, which can command the scope and provide audio as you stargaze. It has a tripod thread and can be fitted to a special Celestron plastic-bodied telescope and act as a guide scope. Unfortunately you couldn’t do this with any metal tube assembly as it would interfere with its signal.

It appears then the SkyScout pretty much has its own game sorted. But there must be some negatives? How useful would I say it is? Who is it designed for? Well some of the content may only be of real use for beginners to astronomy, and the voice, like on most devices or gadgets grates a little unless you like the gentle American twang the narrator has. It's rugged - I certainly wouldn’t mind my 5 year old playing with this rather than my £400 Smartphone with no insurance and 14 months left on the contract. It’s educational - astronomy is in the National Curriculum now and this is great for kids to play with and get to know the night sky without realising it. So to sum up, if you’re short of time, love gadgets and want to learn more about the night sky in small bites-sized pieces, have young children and want to encourage them and their hobby, or you're retired and would like to explore the nights sky but without the bulk, weight and time consumption of telescope astronomy then this could be your thing.

I know certain members of the Astronomy community may turn their nose up at new technology, preferring dusty tomes from a different time to our own and a lifetime of stargazing to back it up, but people have to start somewhere and if a technology can help enthuse and bring new, fresh faces to Astronomy then that must be a good thing? After all, I’m sure Galileo was happy to use all the technology available to him and didn’t turn his nose up at the first practical telescope, as credited to Hans Lippershey, and say “Tish and pish, to this refracting device, t’will never replace the scrabonculosonomous platandarainorous”.  In fact, I’m sure he never said that at all!

A well  made, clever yet effective device and it can keep the little ones distracted - A winner!