In this digital age of photography getting the correct colours in your photographs, on your monitor and from your printer is an ongoing challenge that even the relatively novice photographer is concerned with. No longer the reserve of pro shooters and printing labs, "white balance" is now as much a part of photography as apertures and shutter speed.

It's often argued, quite fairly, that in order to end up with great images, you need to ensure that you're capturing the right colours to start with in the camera. There has been a relatively constant stream of tools and devices developed and marketed to help achieve white balance perfection, including filters that attach to the end of your camera's lens and reference cards and pop-ups that can be photographed and then used as a reference to make the correct in-camera settings. The latest white balance tool to find itself in my camera bag is the ColorRight Pro. 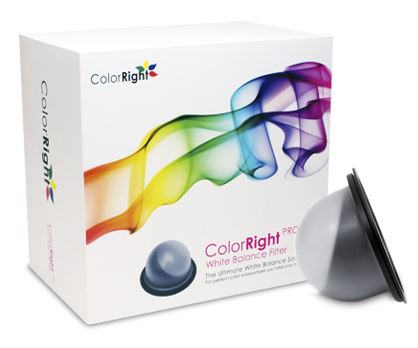 Looking like a cross between a camera filter and a snow-globe, the ColorRight Pro promises to be "the ultimate white balance solution" and is supplied with a convenient lanyard and instruction sheet in a vastly oversized box - not an important point, but surprising given most manufacturer's efforts to reduce packaging. White balanced it might be, but green it is not. The instruction sheet is a brilliantly short and simple to follow guide on how to use the ColorRight Pro. Whilst the dimensions of the instructions are probably amongst the least important specs you are ever likely to need, the fact that this single sided sheet measures just 120mm x 95mm demonstrates just how simple the ColorRight Pro is to use. 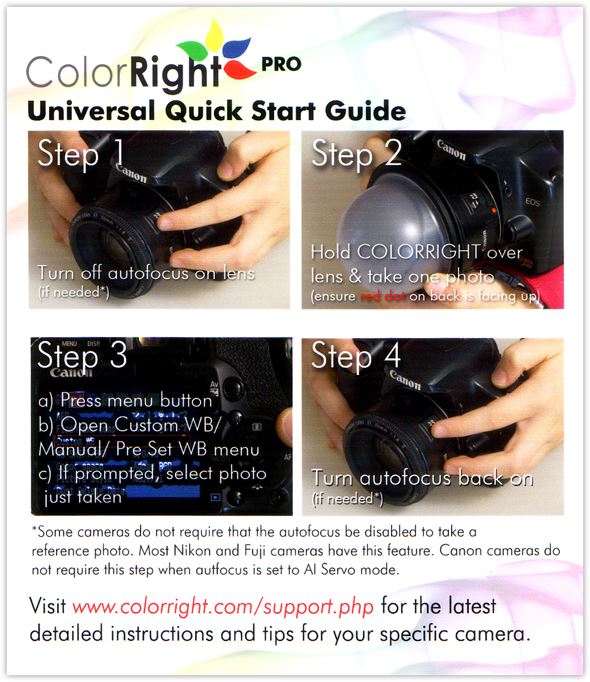 I shoot with a Canon EOS 5D MkII at the moment and, while I've never really had any issues with the colours the camera has produced, I was intrigued to see how much, if any, difference the ColorRight Pro made. The time and venue for the majority of the test shots was a sunny Sunday afternoon in my parent's back garden, but I went out of my way to find situations with different lighting. Here are the shots, comparisons and my thoughts and findings.

I took 3 photos of this bucket of chocolate eggs positioned in the shade of a large umbrella. I used the camera's AWB (auto white balance), the in camera Shade setting, and finally set the Custom White Balance using the ColorRight Pro.

First things first, setting the custom white balance really is as simple as the instructions suggest. Never one to spend a lot of time in my cameras' menus, I was able to follow the simple guide and select a custom white balance within seconds. In terms of the results, at first glance I probably wouldn't have had any issue with the colours the AWB produced. However, by comparison with the warmer shades produced with the Shade setting, the AWB shot does appear a little too cool. In actual fact, the Custom setting has indeed produced the most natural and accurate reproduction. Of course, you have to take my word for it as you weren’t there when I took the photo, but the truth is that round one sees points awarded to the ColorRight Pro.

This time the subject was a group of flowers out in direct sunlight. Once again the camera's AWB was used for the first shot, followed by the Daylight setting for the second, and then a third using the Custom white balance. Because of the change in lighting, I had to re-set the Custom white balance using the ColorRight Pro and would need to each time the lighting conditions were changed. However, by now I was becoming rather practiced at this process and it took even less time than before.

Now, I've checked these shots on various monitors and screens and if I'm being completely honest, I'm struggling to find any obvious differences between any of them. It appears that the light in this shot was as close to the camera's definition of Daylight as it could be and as such all 3 settings have produced accurate and neutral colours. With nothing between any of them, it's a no-score-draw for round 2.

As any photographer knows, the light temperature can change dramatically during the day, with early mornings and late afternoons tending to be much "warmer" than the cooler light around midday. My 5D MkII doesn't have a specific setting for later afternoon light, so I was interested to see how the AWB and Daylight settings would cope with this scene compared to a Custom white balance from the ColorRight Pro.

The differences here are far more obvious. Although the AWB and Custom settings are relatively close, the Daylight shot is clearly far too cool and can be consigned to the recycle bin straight away. Although both the AWB and Custom shots are both closer to the original warmth of the actual scene, the AWB has produced a slightly "redder" image and once again it is the Custom setting that has come closest to the original conditions. Round 3 to the ColorRight Pro!

What I was really keen to find out was how the ColorRight Pro coped with mixed lighting scenarios. This shot was taken in a shaded room with the subject lit by the afternoon light through a window and. just to complicate things further, a small burst of fill-in flash was used. The ColorRight Pro can be used with flash as well as ambient lighting so there was no concern about compatibility, but the mix of light temperatures would surely provide a challenge. To allow comparison, the same shot was taken using the camera's AWB, Daylight, Shade and Flash settings, plus a Custom white balance set using the ColorRight Pro.

Initially, the AWB and Daylight shots look perfectly acceptable, whereas the Shade and Flash shots are clearly too warm and can be discarded. However, the Custom shot is quite different again and at first seems a little too cool. But the thing is that the wall behind the subject is white, and the only shot that has accurate reproduced this is the Custom white balance, so yet again I have to say that the ColorRight Pro has done its job and produced the most accurate colours.

This is where things get a little tricky and personal tastes start to creep in. Although the Custom white balance has produced the most accurate colours, I marginally prefer the extra warmth of the AWB and Daylight shots. It's fair to say that this may be purely because of the subject; portrait shots tend to look better with a warmer tone. In fact, ColorRight themselves would seem to agree with this as they also manufacture a ColorRight Pro Portrait Version which creates a slightly warmer balance than the standard tool. Clearly, they know their market.

To my mind, the best thing a white balance tool can do is create a neutral point from which to start. If you prefer your shots slightly warmer or cooler then you can adjust to taste in one of the many pieces of software available, but it's always preferable to start from a known, neutral point. This is what the ColorRight Pro offers and it does it simply and easily with minimum fuss.

Of course, for a completely colour neural set up this is just the start of the process and you may want to consider looking at your monitor and potentially your printer too, but as a place to start, the ColorRight Pro is excellent. It's not the cheapest device out there, and its price may put the less colour-critical photographer off, but for those who shoot by the book and need to make sure that every shot they take is as neutral and colour balanced and possible, the ColorRight Pro is thoroughly recommended.

Just be sure to recycle the packaging.

Value7/10Relatively expensive unless you really need it.