Announced as a replacement to the X20, the Fuji X30 sits in the X range as a compact camera designed to meet a wide variety of needs. Amy Davies sees how well it meets these in her full review. 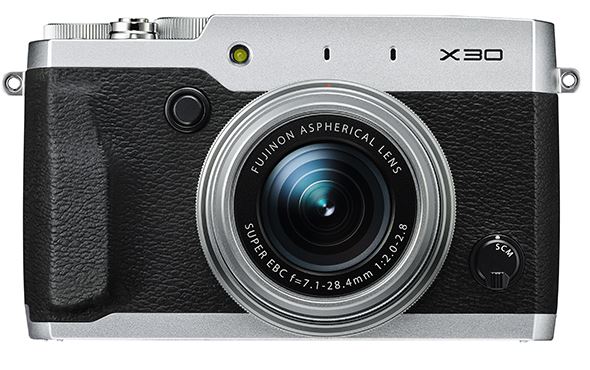 The Fujifilm X30 sits in the middle of the compact, fixed-lens line-up, being more advanced than the smaller X-F1 and XQ1 models, but being smaller and, arguably, less niche than the X100 series (of which the Fuji X100T is the most recent model).

Like the rest of the X range, its design is based on retro stylings of cameras past. It gives you full control with a range of exposure modes, while also including a number of other interesting features. 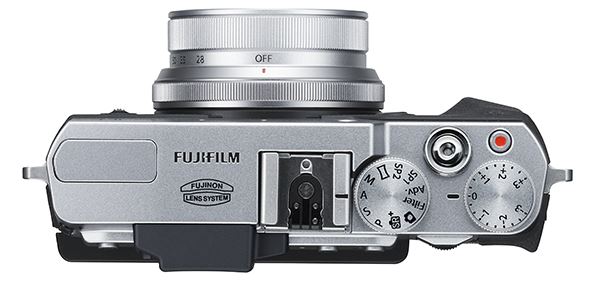 Unlike the prime lenses on the X100 models, the X30’s lens is versatile, offering a 4x optical zoom that covers a 35mm-equivalent range of 28-112mm. As a trade-off, however, you get a smaller 12MP 2/3in X-Trans CMOS II sensor, rather than the APS-C-sized sensors common to X100 models.

While that sensor may be small (although still bigger than most compact cameras on the market), its design is based on the excellent X-Trans architecture that has proven to be so effective on other Fuji X-series cameras.

This type of sensor eschews the Bayer RGB filter array common to other models. Instead, its 6×6 RGGB filter array has a random arrangement of colour filters, which should make the sensor less likely to produce moire patterning. This has also allowed Fujifilm to omit the optical low-pass (sometimes known as an anti-aliasing) filter in order to record better detail in images.

In fact, the X30 uses the same sensor, processor and lens design as its predecessor, the X20. The biggest difference is the new 2.36m-dot OLED electronic viewfinder, in place of the X20′s optical viewfinder. This is the same viewfinder as found in the X-T1, the company’s top-of-the-range Compact System Camera.

Another new addition is Wi-Fi connectivity, which gives you the opportunity to remotely control the camera as well as view images you’ve taken on the camera for quick sharing on social-networking sites.

The screen on the back of the camera has also improved from the X20, both in terms of size and resolution. It now measures 3 inches in size and has 920k dots, up from the 2.8in display that only offered 460k dots on the X20. It also now tilts, making it useful for shooting at awkward (landscape orientation) angles. One thing Fujifilm has opted not to add to the screen, however, is touch sensitivity for this display.

Sensitivity ranges from a native ISO 100-3200, which is expandable up to a setting equivalent to ISO 12,800 when shooting JPEGs. Exposure compensation has increased from +/-2EV on the X20, up to +/-3EV here on the X30, while battery life has also improved with the addition of the battery from the X100S; Fujifilm now claims around 470 shots per charge, which is almost double its predecessor’s claimed life. 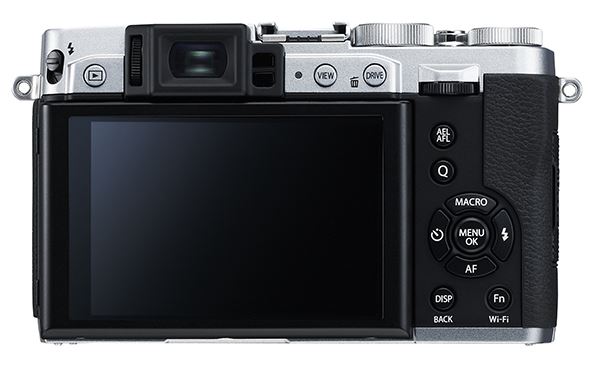 In terms of design, not too much has changed from the X20, but the camera’s overall size has increased; it’s now closer in size to other cameras which have bigger sensors. It’s likely that enthusiasts will appreciate the vast array of dials and buttons on the camera which make it easy to quickly change settings. 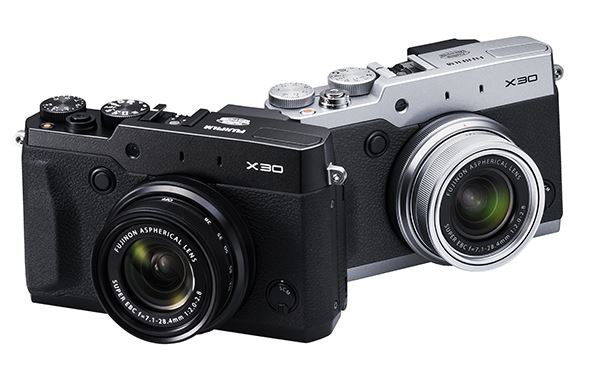 There is no on/off switch or button – instead, you need to twist the lens around to start up the camera. On the one hand this is good as it means the camera is ready to go as soon as it’s switched on, but on the other hand it can be a little awkward if you’re holding the camera one handed.

On top of the camera there’s a dial for switching between exposure modes, including manual and semi-automatic modes (the ‘PASM’ controls) as well as automatic modes. There’s also room here for up to two groups of custom settings, which is useful if you often find yourself shooting one particular kind of scene (such as low light).

There’s also another dial which is very easily reached by the thumb and is used to adjust exposure compensation. It’s a satisfyingly stiff dial which means you’ll be unlikely to accidentally knock it out of position. 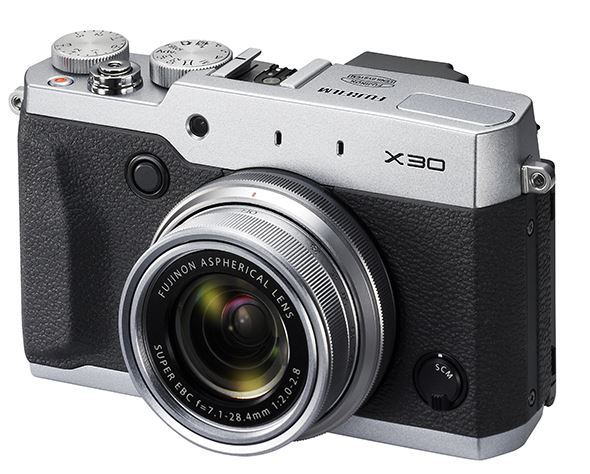 The whole camera is covered with a leather-like texture, which not only looks good but also means it feels secure in the hand. On the front of the camera is a small, but effective, ridge, which helps the camera sit comfortably in your hand, and this is joined on the back by a textured thumb rest.

Most of the X30’s buttons can be found on the back of the camera. There’s also a small dial just below the exposure compensation dial which is used for altering shutter speed or aperture, depending on the shooting mode you’re using. It’s also used when using the Quick menu; this is activated by pressing the Q button on the back of the camera, which bring up a group of most commonly used settings. To change these you just use the directional keys to move to the setting you need, before using the small scrolling dial to make changes to individual settings. 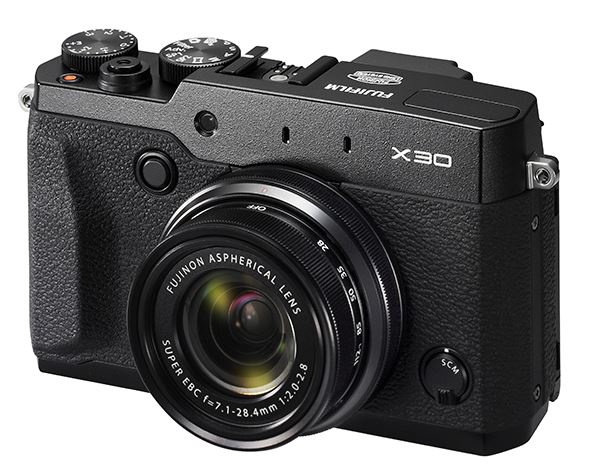 Each of the buttons on the four-way navigational dial also double up for specific functions. The up button activates macro focusing; the left controls timer mode; the right controls flash mode; and the down changes the AF point. If you press the down button once, you can then use the other directional keys to move the AF point to where you need it.

Other buttons on the back of the camera include a View button for switching the display and EVF on and off; a drive button for changing to continuous shooting and bracketing modes; and a function button which, by default, controls the Wi-Fi functionality of the camera.

On the front of the camera, there’s a switch for choosing between single, continuous and manual focusing and a button just next to the lens which allows you to change the function of the control ring around the lens. That control ring can be set to change ISO (sensitivity), white balance, Film Simulation, continuous shooting or to the default mode for the specific shooting mode which is selected (ie the aperture in the aperture-priority mode and shutter speed in the shutter-priority mode).

The electronic viewfinder has an eye sensor which automatically detects when the camera is lifted to your eye, making for a nice seamless transition between using the viewfinder and the screen to compose, and then back again to check the image or make changes to settings. 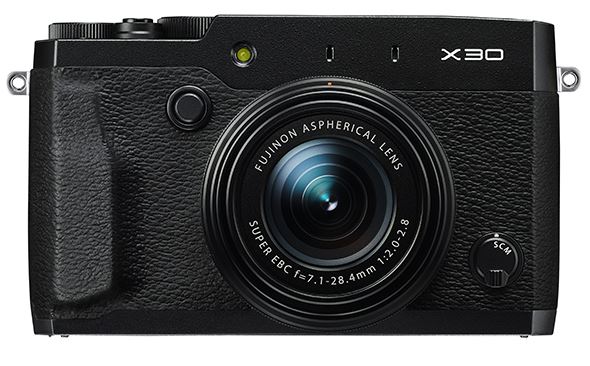 At times, I found the camera’s slightly unusual start-up mechanism to be a little less than responsive. While it did indeed start up most of the time, if the camera goes to sleep because you haven’t used it for a few minutes, it seems harder than it should to get it to switch back on again. This wouldn’t be quite so bad if it was consistent, although start-up times seem to vary randomly.

Fujifilm quotes continuous shooting speeds of up to 9 frames per second if shooting simultaneous Raw and JPEG files, or 12fps if shooting in JPEG only. With a Class 10 SDHC memory card installed, the High setting (Raw and JPEG) manages the 9fps speed but only for a second or two before stopping. Therefore, if you’re photographing something that’s moving quickly, it’s advisable to switch to JPEG-only shooting.

Generally speaking, autofocusing is pretty quick on the X30, and the camera manages to lock onto the subject with ease. You can activate macro focusing if you need to get closer to the subject too, which is useful when you want to create frame-filling shots.

The viewfinder, being the same as that in the excellent X-T1, is great to use, and it’s nice to see something so good on a compact of this level. It’s large, bright and clear, and gives you an excellent view of the scene you’re photographing. Meanwhile, the screen is also decent; while it does suffer slightly in very bright light, having the viewfinder means you don’t need to rely on it in such situations. You can also tilt it out of the way of reflections if necessary.

Shot-to-shot time is good but, on occasion, I had to wait a little longer than I would like to see to view images in playback. On a couple of occasions it took up to 10-12 seconds for the processor to finish before displaying an image, which can be frustrating. At other times it is much quicker, which again shows some lack of consistency. 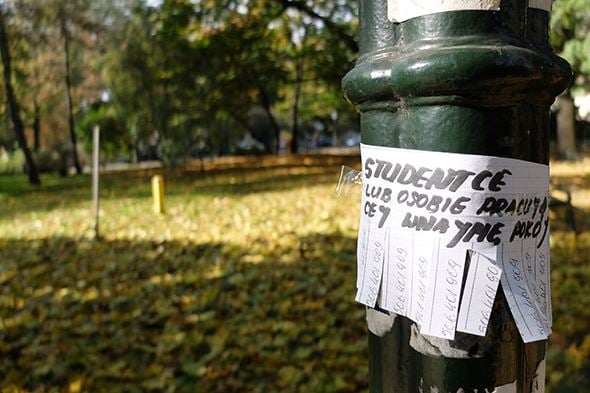 As we would generally expect from a Fujifilm camera, the overall image quality from the X30 is great.

Colours are wonderfully saturated and display a pleasing level of vibrance that, most of the time, isn’t too over the top. If you find that it is, switching to a more muted film simulation mode, such as Astia, can be of benefit. 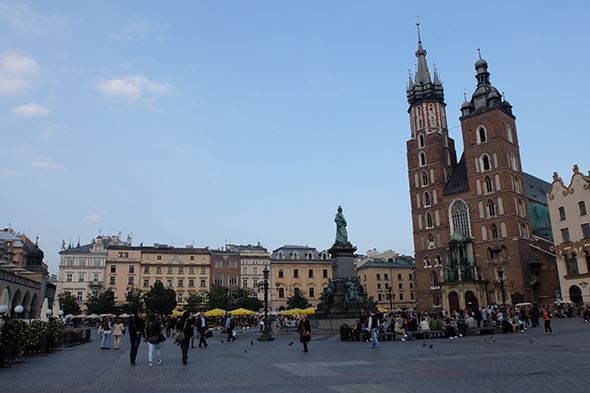 By comparison with other competing cameras on the market, the X30′s sensor has a relatively low pixel count, and a smaller physical size. Yet, thanks to that unique sensor design, it’s capable of resolving detail fantastically well, which gives it an edge.

Automatic white balance works well when faced with artificial light to produce accurate images, but you can change this setting if you find the camera is struggling, or if the light is heavily mixed. Similarly, the general purpose metering system copes well to result in well-balanced exposures, with the exposure compensation dial not being relied on too often. 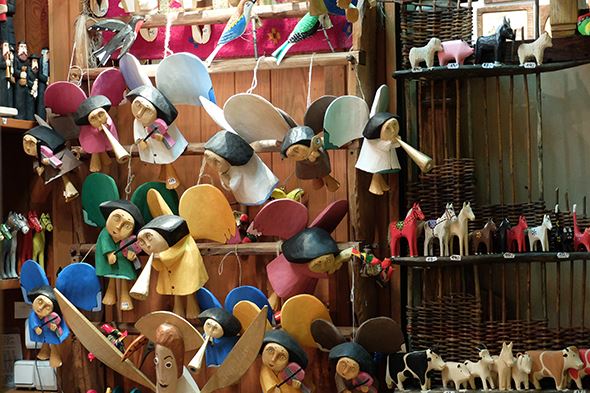 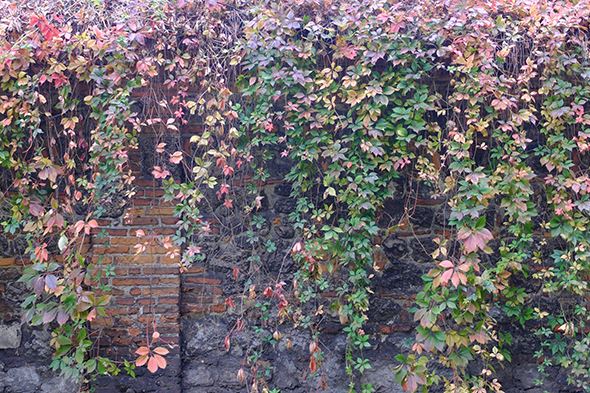 Noise is well controlled throughout the sensitivity range, and the X-Trans sensor does well to keep detail, too. At ISO 3200, the overall impression of detail is great when viewing at A4 or below. Examining the JPEGs at 100% reveals some areas of smudging and a slight watercolour appearance in some areas of the picture, but it’s not too noticeable at normal sizes. Working with the Raw images allows you to pull back some of that detail, but at the expense of introducing a little more noise; it’s up to you which you’d prefer. 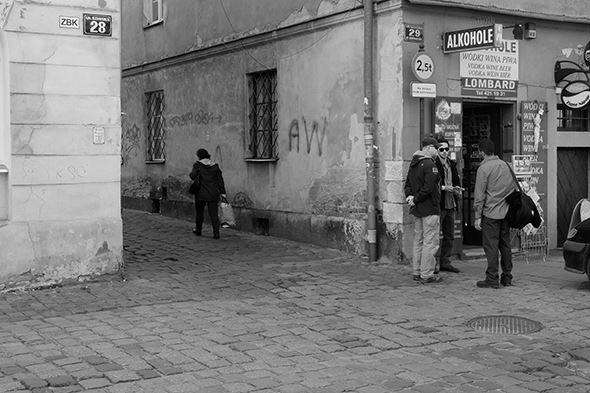 The highest ISO setting of 12,800 can only be used when shooting JPEGs and is probably best avoided unless you’re particularly desperate. 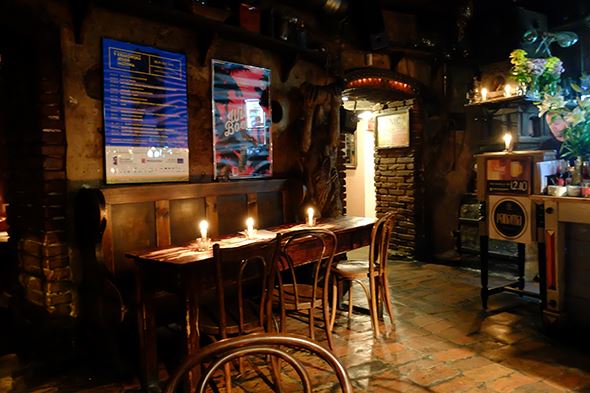 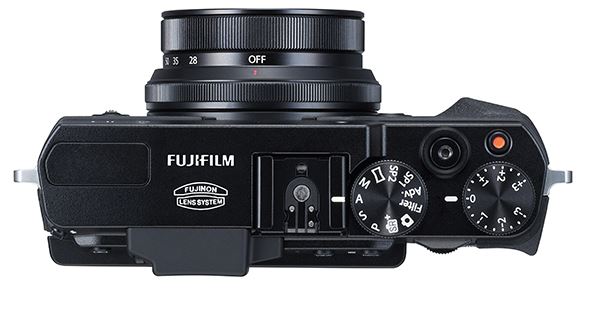 The Fuji X30 is appealing in lots of different ways. Happily, its beautiful retro styling is matched by image quality which is impressive in a wide range of situations. If you’re looking for a compact camera to use as your everyday, carry-around camera, but you still want to take full manual control, shoot in Raw and keep the benefits of an electronic viewfinder, this X30 is a very good choice.