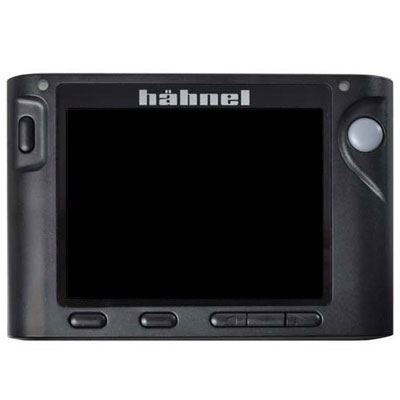 It's funny how sometimes a widget turns up just after you felt the need for it. Over Christmas I was staking out our bird table and bemoaning the need to shoot from a 'hide' (our hall by the fridge) and  thinking to myself - wouldn't it be easier to place the camera out there and shoot from the comfort of my sofa? And Voila! I've been lucky enough to have Hahnel's new Inspire remote knock at my door :-)

It's a two unit wireless remote for SLRs (and a few compacts) which includes a video link so you can lounge in comfort whilst your camera stakes out the rich and famous or small and furry on its own. There are two variants – for Canon and Nikon cameras. I had the Nikon version to play with, which came with 3 different release cables to suit pretty much every D series SLR. 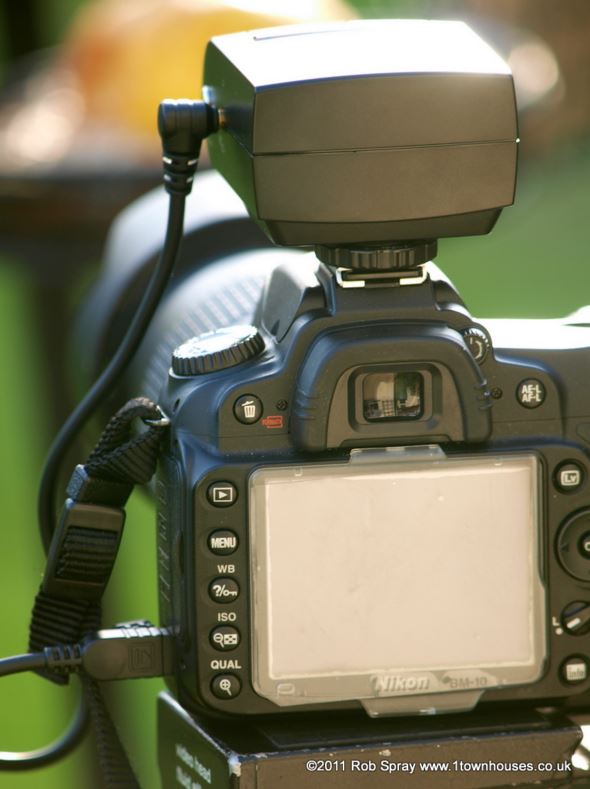 The set includes the release cables (3 in the Nikon pack)

Live through a lens

Before we get on to the main feature – remote shooting – I think the most understated aspect of the package is the video camera hidden in the transmitter unit. A tiny lens lurks in the front of the hotshoe mounted sender and has a similar view to a 35mm equivalent lens. I had thought it would be more impressive if it could peer through the viewfinder but in fact the wide, overall view is much better for seeing how subjects are moving around your phototrap.

The camera is just the first of two ways a live remote view is provided. The transmitter can also take the video output from the body to relay the camera's own liveview. SLR liveview normally interrupts the fast AF path, and even normal AF might startle your subjects so you may decide this is a job for manual focus (like I did). Connected to the camera's own video output you also get see the review of the stills you shoot. For this the manual asks you to change the output of your camera to NTSC -  the American TV system. This hardly matters unless you regularly connect your camera to to your telly in which case, depending on your telly, it might be quite annoying. 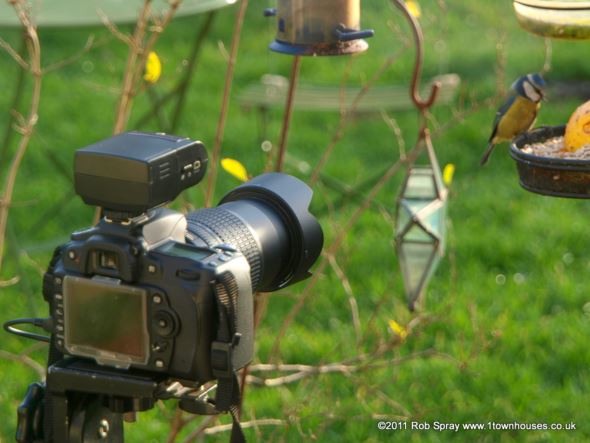 The receiver unit is light and reasonably well made, the size of a basic satnav. It's a 4:3 aspect 3.5” diagonal unit, bigger than most camera displays. It isn't the same quality of LCD you'd get on cameras these days but that's bearable for a couple of good reasons. Firstly you can take it somewhere with suitable lighting, and secondly as you can't fine tune focus or colour balance it is primarily a guide to composition anyway. It's not bad for that and perfectly acceptable in operation. 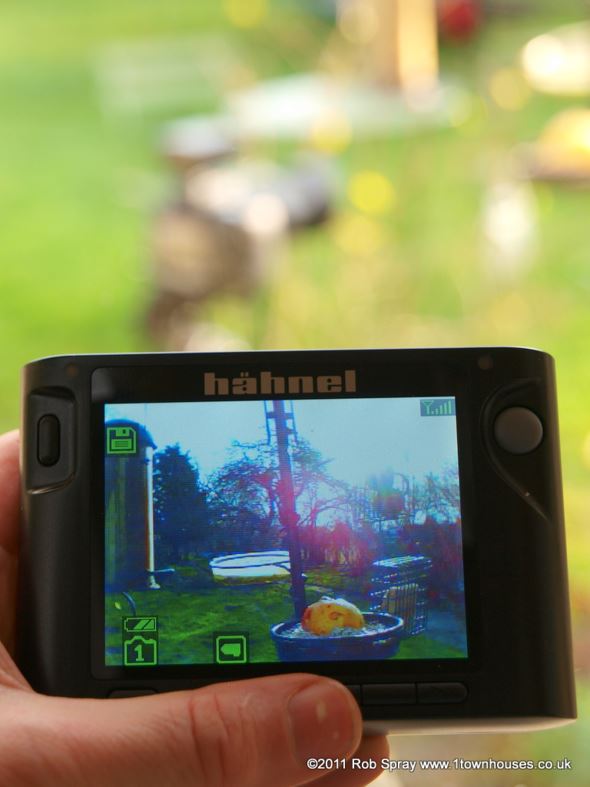 The receiver (and remote) keeps tabs on power and signal levels

The transmitter isn't rainproof so your unprotected set up has to come back in if there's a shower. A simple polythene rain hood or surf bag would help it brave most temperate weather and at least cut out a lot of scurrying back and forth for each passing cloud. This lack of weatherproofing may be more galling if your body is hardened against the elements. 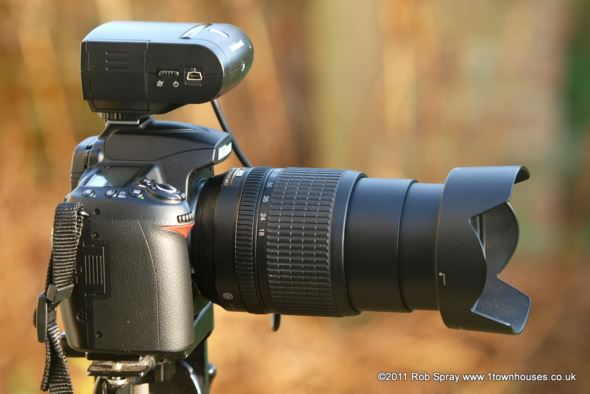 The picture is relayed like a video sender – so don't expect HDTV. It's not quite standard def and oddly the video from the remote camera isn't full TV frame rate either. Thus the view is a little jerky, but you can see when your subjects are looking around. You might like to know that the single remote can be used to run 4 camera systems - so you can cover all sides of the bird table or completely different sites. Without extra receivers to try I wasn't able to explore all the ways that might work. As far as I can make out, you trigger only the viewed camera, you can't make a multiple selection from the ones available. You can mix camera brands amongst the 4 channels.

Skimming the specs I thought that the wireless link had a data path for picture data. It doesn't but it has the facility to capture and review grabs from the low res relayed video. That's possible whether you watch the camera or liveview but there is no way you can check fine focus. The grabs are saved only in the receiver and there's no way to download them.

The response time is excellent, instant as far as I could tell. The shutter button on the remote does allow a half press before a full  release which is great for coping with birds which won't settle on the mark properly. The UI is pretty basic so you don't get many other controls; brightness, camera selection, capture and review. There isn't any way to configure the camera remotely so you have to take the time to fine tune your set up before your can sit back and gather celebrity dirt... which I suppose might be another use for this cunning kit. It took me several tweaks before I was happy to spend the rest of the afternoon watching bird table TV. If you think you might drop off you can set a sleep timer. 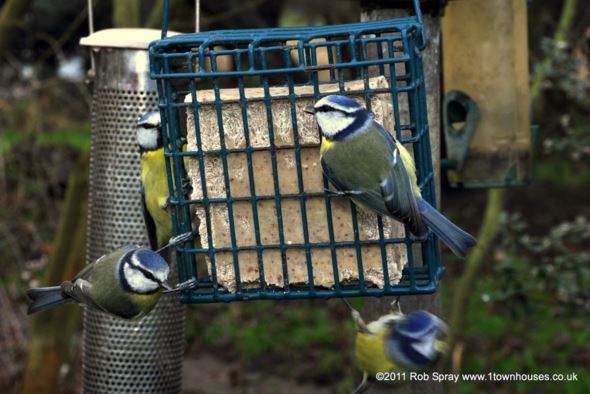 Both halves of the system are powered independently and hold 4 AA batteries, which makes them chunky but not too clumsy. Both can also be USB powered – so any one of a million iPod chargers and similar devices can be used. The transmitter is pretty mean on juice but the remote panel will gnaw through a set in around 4hrs – I'd recommend rechargeables so you don't begrudge running the system for long periods.

The advertised range is 60m.  In practice the range was safely 75m in open air but fell slightly with each obstruction. Thoughtfully, the remote includes a signal strength meter so you can tell whether you stand a chance of succeeding. At 60m a human body made the difference between full and zero signal. Metallic obstructions like fridges and radiators will kill reception but thin partition walls and windows won't. Through a rendered brick wall the range was more like 10m. So you may still need to be quite close to your quarry if you want to stay indoors. The meter was reliable, if it says it will work it does. Video reception doesn't fade progressively, the picture just freezes when it's lost. 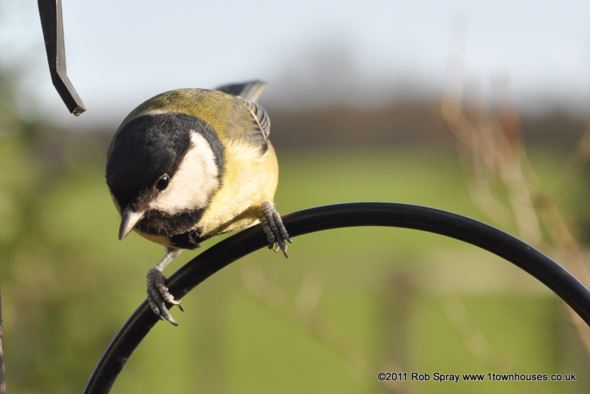 At present the units fit Canon and Nikon – which has the bulk of the SLR market covered. The data sheet shows the Canon version also supporting Pentax and Samsung SLRs, as well as later G series compacts. I don't know if they will support the latest mirrorless efforts from the big two – the G1X and 1 Series.

While the Inspire setup isn't the most elegant add-on it does just what it says on the can. Shutter release was reliable and has serious range. The preview transmission seems to be the same kind of  technology as TV senders and has the same strengths and weaknesses. I would expect that a more heavily populated area than my rural home would reduce the range. 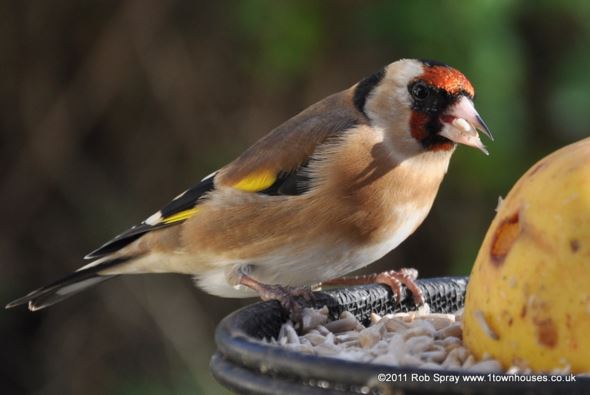 Goldfinch working through our sunflower seeds

The system offers several advantages over merely buying a much more powerful lens, cost is the obvious one. Without a human attached you can place your camera very close to your subject, close enough to use flash – depending on how upset they are by your snooping arrangement. Our baited bird table was a happy hunting ground – subjects need to arrive in exactly the right spot or you are helpless. Owl boxes, z-lister front doors and fatty seedballs are all feasible.

I managed to get a few interesting shots. I reckon this would suit a long term passion or study as the longer you take over your project the better the results get. It's priced keenly enough to be an impulse purchase which will be very rewarding if it suits your obsession.

Handy if you need it, obviously not for everyone