Combine men with any hobby (or profession) and you'll soon need 'storage solutions' to carry not only the stuff they really need but also everything they might need if something unexpected happens... Whereas normal people (women) could accept that a compromise would allow them to get 99% out of any trip, a man will wonder whether this could be the day when he finally sees Kylie wrestling Anne Widdecombe in muesli and have to take a whole mountain of vital accessories to capture the moment.

Warning: Female readers might recognise a few weaknesses of their own but remember only men should feel any guilt at all, and gross stereotyping allows for some more extreme examples :-)

You can't fight nature so embrace your paranoia... and buy bags! I have lots; bum bags, SLR zoom bags and back packs, so very many back packs. They're the only way to carry all the things you need for a photo trip and now airlines are so mean with their luggage allowances they are vital hand luggage for any holiday journey. Men don't 'get' handbags but give them half an excuse and they'll be twirling in front of mirrors with rucksacks trying to see if their bums look big. 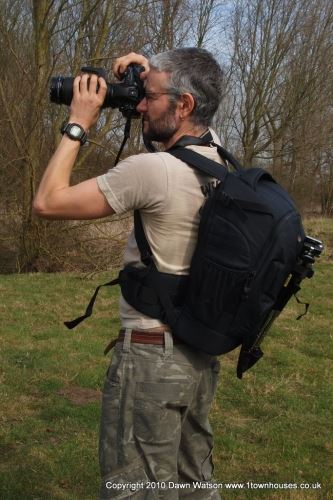 Does my bum look big in this. It's short and doesn't hang uncomfortably over your backside

As a man I'm always looking for problems with the things I buy to solve my last lot of problems, so while last year's bag was the bees knees, I always long for something better...

For example, my current back pack is a Lowepro CompuDaypack, as I often carry my laptop. Because of the laptop compartment it's a bit of a compromise as a camera bag. Although it stands up on its own for loading and unloading, all the access is via zips on the rear of the bag - which I always arrange carefully to make them harder for sneaks to open. It's a good holiday bag and makes carrying 10kg+ fairly comfortable.

The Lowepro Flipside 400 AW isn't a compromise camera bag. It combines a lot of Lowepro's good ideas into a small but roomy backpack which should give you enough space to carry a full photo arsenal for those unexpected opportunities. We all know that flipping is a bad thing when MPs do it, but for a Lowepro it means that the bag can be opened on the strap side... You might think this would require a mighty feat of contortion, but in combination with the waist strap the bag can be slipped off the shoulders and spun round to your front. You can either wear it as a huge codpiece (fooling no one apparently) or opened out and used as a table to swap lenses, batteries or filters as you prepare for that Minogue/Widdecombe face off. Think cinema usherette ice cream tray, to the max! The cunning design thoughtfully holds the padded back up out of your way and even puts a row of memory card pockets right under your nose. 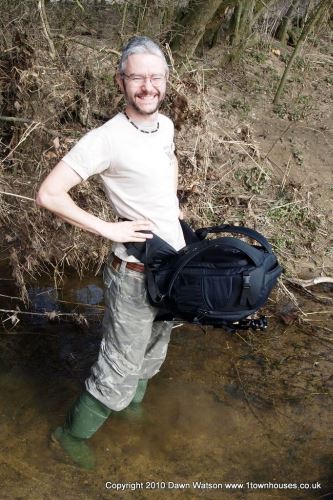 Codpiece or ice-cream tray - you decide! Make sure the waist strap is secure.

If this sounds too good to be true, and I was sceptical, then I can confirm that the waist strap alone can support 8kg of badly top loaded weight. If you concentrate the heavier stuff lower in the bag it's much more comfortable. If you have more than 10kg on your back I think you might want to consider whether you need to leave some of your ornaments at home.

Honestly, does it look flipping big in this?

The Lowepro Flipside 400 comes in the all black I tried or with subtle olive green patches. Not party colours but ideal for a day's low key stalking of celebs or wildlife. The exterior finish is tough, close knit polyester which feels as though you could slide down a hill on it and still come up as fresh as a daisy. The exterior isn't waterproof but it is water resistant/repellent and rain just runs off until it gets driving hard. The outer walls of the back are all padded and quite stiff so it won't crush down easily and let your toys get squashed if it has to mix it with other luggage.

The 400 is significantly bigger than the 300 and easily carries a full size SLR fitted with a honking great zoom. The interior layout is secured with Velcro so you can realign the dividers for bodies with an offset and, depending on your preferences, carry a minimum of a spare body, flash, 4-5 lenses and several Mars bars... and that's just the main cargo bay. The backside has one large-ish pocket and could hold more bodies, sandwiches, chocolate or batteries galore. In fact it'll easily swallow my Samsung 10" net book, a t-shirt and a pair of emergency pants, so I wouldn't have to travel too light at all! Elasticated mesh pouches either side will hold 1 litre bottles but suit half litres better. If you need yet more space you can add myriad Lowepro Sliplock pockets and pouches to the straps and sides. 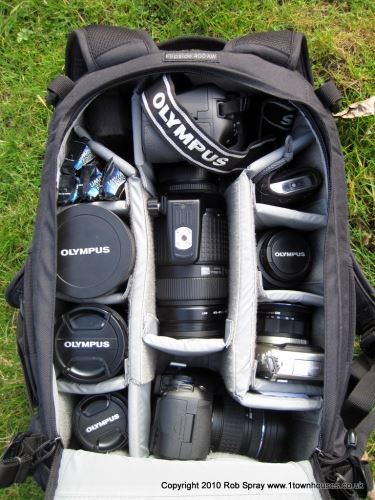 The 400 isn't really a big bag at all but layout is efficient and there's very little lost space; I'm an Olympus shooter and even my E-3 fits with depth to spare, in fact it and all my E-Series bodies can even be stored stacked front to back freeing up extra room. Lenses up to 140mm long will stand in the bay but larger glass has to lie down. For those with 'ample' bodies there's still room for two; the WEX user reviews include endorsements from Canon users who have carried either two pro bodies ready to shoot with mid size lenses or one and some monster glass. Even full the Lowepro Flipside 400 AW stays comfortable for long walks, the payload is held close to your back and the waist strap plays a big part in spreading the weight.

Some of the best fun features are the hidden extras; at the bottom of the back pocket there's a zip concealed pull out support for the bottom of a small tripod or monopod which can be secured with a strap further up. Thoughtfully there's another pair of straps high on either side to hold a larger tripod, jacket or souvenir salami across the top. I did initially confuse the AW rating with Lowepro’s Dryzone range (which float) but what the AW does mean is that apart from the inherently water resistant materials the 400 also has a pull out, pull over, pull tight rain cover. This protects the bag from the kind of shocking weather that should drive you inside – unless you're mad or simply aren't talking to each other and have to trudge on until one of you admits you're both going the wrong way. That's not the sort of weather you'll be opening the bag in so cocooning it seems totally logical. Most of my equipment is weather or water proof anyway once set, but that kind of reassurance is great for the backup supplies which I can put off accessing until I'm under cover but can't afford to expose to monsoons. Who doesn't hate soggy Mars bars and boxers?! Because of the Flipside's design, when you do find cover you can open the main bay without having to take off the cover which is a great time saver. 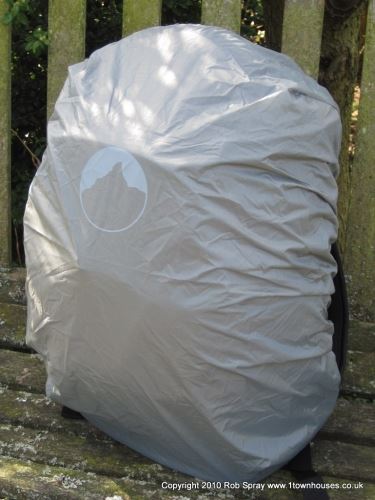 Cocooned - ready for summer! With the All-Weather cover in place

There may never be a perfect bag but one which aims to be a picnic table as well as a storage container is trying pretty hard. The only significant downside of the design is that the stuff in the rear pocket is stranded upside down as you work in usherette mode – otherwise it would be an ideal place for consumables which need changing as you set up for the next round of Celebrity Cereal Combat (I have that idea registered already, hands off). To keep the base of the bag stable the zips don't open right down to the base of the main bay, which can make getting stuff out of the bottom very slightly tricky, but you can easily pack so the tricky stuff isn't down there of course ;-)

Once I knew I could get my Net Book in the 400 I was sold. The clever flipside working platform is stable and even safe enough to do some pretty delicate work over water if you need to. The whole main bay can be reworked to suit your kit and holds all but the very biggest lenses. The finish is as solid as you would expect from Lowepro and will last most people until they have a hover car and a 3D holocamera.

Like Leatherman tools, Lowepro bags continue to define their own market with a lot of imitators (some very good) but it's always great to have the original.

The Lowepro Flipside 400 AW is a great backpack for the great outdoors. 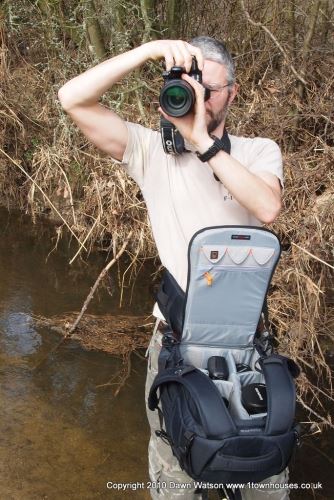 Stable enough to shoot before closing