My girlfriend couldn't suppress a smirk when I first put this on... it's a rather male bag whoever wears it. You might worry whether that's going to suit you but lets be honest, if you are carrying the camera that justifies this bag you will be used to people gasping and pointing, probably just before they kneel at your feet! If you have invested in a big body and bright long lens then you want it safe in transit and by your side whenever you can. They always say the best camera is the one you have with you and the right bag stops you wondering whether it's worth the hassle.

Shoot from the hip... probably at the hip

This isn't a general purpose bag for typical family days out or gentle strolls. This is the bag that stays loaded by the door for a dash to catch an avian rarity, a day stalking beasts in the wild or camped on the pavement outside The Ivy. My ratings reflect that this is a specialist. Sure you could pack it with half a dozen small cameras but it's a holster for a big gun and the best at that, its intended task. This is the bag to take the strain when you're between shots in the wild; designed expressly for a Pro SLR body and a large aperture zoom. It has a little brother, the Outback 100, which is very similar but a bit shorter for a big body with a standard, wide to mid zoom lens and the essential extras. 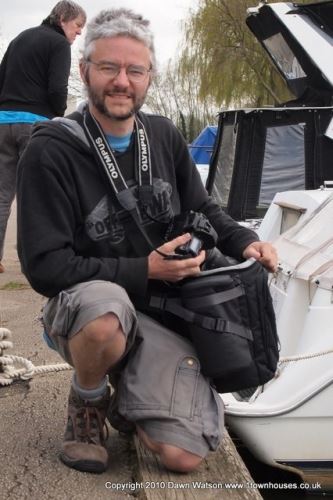 The Outback 200 is for serious photo folk, either as the sole carrier for those who aren't straying far from food and sleep, or those who have left those far behind and need an overflow from a main back pack for the weapons they need at hand. It is as small as a bag for a Pro body and large aperture mid zoom could be. In fact it looks to have been tailor made for a Canon 1D, and the Canon 70-200mm 2.8L.

As a point of practicality and etiquette always wear this bag to one side, not only does it look suspect to position it as a mega sporran but it's also a lot to have swinging around between your legs and can catch you one in utility room* if you aren't wary.

*Sorry to use technical jargon, I think you know the term

My lone criticism would be that the main bag is entirely given over to one camera and lens combination. If it is what you need, it could not be better suited... but if you need more flexible storage then look elsewhere. The same nearly applies to the side pods – they're very deep but it's not unreasonable to use one for a stack of lenses - although they are eminently suited to long ones and they fit a large flash quite nicely. They're a perfect diameter for typical large aperture lenses but roomy for more standard fare. My 50-200mm Zuiko fits like a fat finger in a big glove – aside from its tripod mount which is a bit of a pain. The deep zip pocket on the front takes care of some of these odds and ends but isn't padded – to keep it low profile. 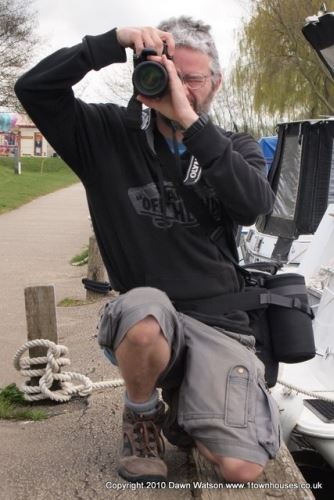 ...once open the camera is free to leave.

So loading this combo takes a bit of planning; the main compartment filled by largest body and lens combination which can be fitted into the 32cm (12.6") depth. It is tailor made for the big 35mm sensor Canon, Nikon and Sony bodies or more modestly built pros with vertical grips. Coupled with their big bright 70-200mm lenses or something a size up for Four Thirds. My E3 had plenty of room with my 50-200mm (even with a teleconvertor on) Perhaps this is a great time to chance my arm by suggesting that a nice new Top Pro lens would make sure I could make the most of this bag :-)

I've almost forgotten to add the obvious, that the Outback 200 is built 'Lowepro'. The outer is their dense woven nylon – in Henry Ford black only - and heavily padded body so you can cast it aside in a hurry if you need to. The stitching is impeccable, of course, so you can grab it by any strap without worry. The sidepods can be swapped for other modules if you want to create a different configuration and the webbing strips on the front and lid are begging be filled with more oddments. It has pockets in the zipped lid and a separate zipped compartment down the outer side. All the zips are fitted with big loops to hook an impatient finger for rapid opening – and Lowepro's fine toothed fast running teeth too.

The most eye catching features on this introvert are the lens carrying outriggers. These sidepods are standard modules from the slip lock range which can even be shared with your other Lowepro bags. Here they are given extra support by a pair of straps on each side which spread the weight on to the waist band... Yes indeed, this is the heftiest 'bumbag' I've ever seen. It has a padded shoulder strap too, which makes for extra security and further spreads the weight. It's worth bearing in mind that you could easily be packing 5kg+ into this bag, which is a lot to have dangling solely from your waist. 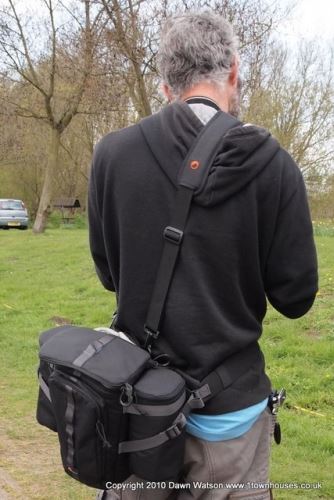 The shoulder strap carries a lot of the weight

The main compartment has a couple of dividers, one to support the end of the chosen lens, the other to align and support the body. This is great for fast out of the holster action, but does create a hard to access cavity below. As always the value of any package to you depends how well you fill it, but the lens and body to fill this bag thoroughly justify its purchase.

Although this is a "real man's" bag for serious boy's toys – I'm sure real women would find it just as useful for their big lens outfits when they're out and about.

Dawn suggested that this would be what I might wear to cover my modesty (with ample room to spare!) the next time I'm asked to pose for a WI style calendar. To be honest I'd probably choose something in red to go with my eyes, but you get the idea...

Cons: Big and not an all rounder

Built for fast access to big kit, which it does well. 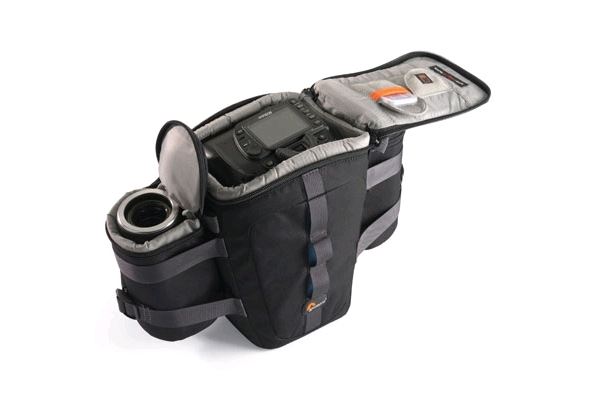