Monarch of the Lakes

Nikon optics are some of the best in the world. Fact. The quality of Nikon’s photographic lenses is well known and appreciated by many Wex Photographic customers, but looking further afield, their sports optics are equally adored by many, from their microscopes to their ophthalmic lenses and, of course, their binoculars.

I own a pair of older Nikon Sporter 8x36 binoculars which tend to live in my car so they’re always on hand, and I’ve always been really pleased with them. However, the best way to test binoculars is to compare different models; their various strengths and weaknesses suddenly become much more obvious. As such the opportunity to borrow a pair of Nikon Monarch 10x42 DCF binoculars for another weekend jaunt to the Lake District was jumped at, and two pairs of Nikon’s fabulous optics accompanied me up to the Cumbrian fells.

What are you looking at?

I’ll start with a dose of honesty: I’m no twitcher. Although a love of the great outdoors naturally involves an element of wildlife appreciation, I’m certainly not a dedicated birder. As such, any binoculars I have tend to be used for a vague mix of subjects, including some wildlife observation, a bit of astronomy, but mainly landscape orientation and path-finding. This means that the binoculars have to sit in my day-pack while I’m trekking through the hills and are occasionally pulled out to survey the surrounding landscape to look for obvious landmarks or spot where the path leads.

At 615g the Nikon Monarch 10x42 DCF binoculars weighed more than my 8x36 Sporters, but you would expect this form the extra glass and more robust build quality. Granted, they’re not the lightest 10x42 binos in the world, but neither are they by any means the heaviest, and their addition to my rucksack was barely noticeable.

Unfortunately, the conditions in the Lakes weren’t ideal for testing binos – it was clear, bright, and sunny. Any decent pair of binoculars should operate well in these conditions and it’s only under less than ideal lighting that you can really see the difference between a good pair and a great pair of binos. However, reviews I have seen elsewhere of the Nikon Monarch binoculars suggest that when it comes to light-gathering, they are genuinely superb. Certainly, at 7.00 in the morning when, although it was perfectly light, the sun was still climbing in the sky the Nikon Monarch 10x42 DCF binoculars provided a superb view across the lake towards the Scafell range we’d be climbing. 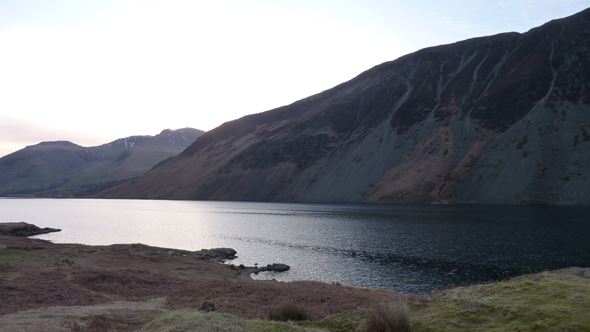 It’s difficult to say for certain, but they did seem marginally brighter than the Sporters, and the difference in colour and contrast was certainly noticeable. While I’d never have complained about the Sporter’s performance, the Monarchs produced a much punchier image, and one that was so sharp it was a revelation. Distant, seemingly featureless crags suddenly became a tapestry of ridges and clefts and where, to the naked eye, it had appeared flat and smooth, the rock was alive with texture.

The Monarchs are available in a range of magnifications and with different sized objective lenses. The model I was using had a magnification of 10x and 42mm objective lenses. 8x or 10x magnification tends to be the norm for general purpose bins – lower magnifications just don’t bring subjects close enough and higher magnifications can become difficult to hold steady. Certainly the 10x42s were ideal for the use I was putting them to. A model with 8x magnification would probably have sufficed, but the little extra reach was a definite advantage when picking up a distant path from a handy viewpoint. The 42mm objective lenses produce beautifully bright, clear images, with no aberration that I could detect. That said, on such a beautiful day 36mm lenses would probably have been just as good and made for a slightly more compact and lightweight pair of binoculars, but had it been dim and dull as it often is in the Lakes, then the brighter 42mm lenses would have been much more valuable.

Picking binoculars for any occasion when using them isn’t the main focus can be difficult. On one hand you don’t want to lug around a heavy pair of full size binoculars just in case you want to use them, while on the other you don’t want to be stuck with a dim pair of compact binos that aren’t up to the job you need them for. With that in mind, I have to say that I’d happily take these Nikon Monarch 10x42 DCF bins with me on a trek like this. With just the necessities in a daypack, these add only minimal weight to the luggage. If I was going out specifically to use binoculars, for example bird watching, nature observation or to a sports event, the Nikon Monarch 10x42 DCFs are exactly the kind of binoculars I’d take along.

Taking in the views

Over the course of the day the Nikons were pulled out of the bag remarkably often and passed round the group for everyone to have a look through. Subjects included those I’d expected, such as distant scree slopes to determine if there was a viable way up, plus those that just made it nice to have the binos to hand, including a diver emerging from the depths of Wastwater, some climbers high up on the crags above Hollow Stones, a paraglider catching thermals above the summit of Scafell Pike, and even Sellafield nuclear power station in the distance.

So, am I tempted to pick up a pair of Nikon Monarch 10x42 DCF binoculars in favour of my trusty Nikon Sporter 8x36 bins? Well, I’ve had my Sporters for years and we have been to some amazing places and seen some incredible sights, but the Monarchs are amazingly sharp and just that much brighter. In addition, although thanks to the glorious spring weather we were blessed with I never got a chance to put them to the test, the Nikon Monarch binoculars are fog and waterproofed - something that the Sporters are lacking. In short, then, yes, I am tempted – very tempted indeed.