Buying so called 'non branded' products can be a bit of a no-no for some people, and I know many photographers who won't touch anything unless it's got Nikon or Canon written on it. We all put our trust in these major brands, knowing that we are buying the best, and taking their quality and reliability for granted. This is interesting as many photographic companies now manufacture their top selling models in the far-east, not perhaps exactly where we imagine. My latest Nikon lens for instance was made in China and my lovely little Leica was made in Japan. In fact, the Nikon Speedlite I bought just before Christmas was also made in China.

So with that in mind and a whole host of less expensive non brand products on offer, should we start taking them more seriously? I remember something my Mum used to say: "You can only spend money once", meaning that you should always try to buy the best that you can afford. I’ve always been an advocate of that approach, preferring to save up that little bit longer to buy something of better quality that will last. But in these tough times, when people's budgets are much tighter, surely it's worth looking at less expensive alternatives?

So I've been looking at the Nissin Speedlite Di622 flashgun, challenging the top brands at nearly half the price. Nissin guns have been selling in the UK for some years now and I was very interested to see one for myself.

Well, for a start the Nissin Speedlite Di622 comes in a nice silver box with shiny writing on it that looks the business. The flashgun comes in a soft cloth pouch with an accessory to hold it onto a flat surface or stand. The instructions for the gun are not in a book that you'll never read, but on a single fold out sheet; this is a good start!

I must say that handling the gun does give you confidence. It's a good weight and is made of very smooth and sleek material that has no sharp edges or corners. The head rotates and tilts easily and has very positive indents. The head rotates 90 degrees to the left and 150 degrees to the right, with a bounce tilt of between 40 and 90 degrees - and it all moves very smoothly. The battery compartment is on the side of the gun and takes 4 standard MN1500 size batteries. The door of the compartment is nicely hinged, but I found that it's easier to close it with two thumbs rather than one, but not a real problem. Connecting it to a camera body is simple, it just slides onto the hot shoe and is locked with a plastic screw; so far so good. 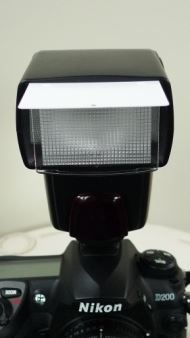 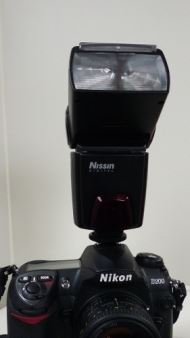 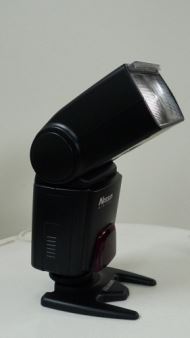 Those of you who know me by now, will know that I like the layout of the controls (on any piece of kit) to be as simple as possible and really easy to understand. The Nissin isn't bad here. On the front of the gun is the flash head and tube, with the standard pull out wide angle diffuser at the top. However, there is a surprise; when you pull out that diffuser, a small white panel that Nissin call a 'catch light reflector' the same size as the diffuser also appears. I thought this was a useful addition that will help to control the guns output, and it slides back when not required. On the rear of the gun are all the controls, two white buttons, Power & Mode, a clear test button marked Pilot, a Power Level scale from max to min and a red TTL indicator.

It all looks pretty smart and the buttons are smooth and nice to push. From my point of view this is great, with everything clearly marked and simple to use. I think this is the key thing about this gun, it really is simple to use because the options are basic. You either work with TTL or Manual and that's about it. You don't get endless menu's offering an array of bewildering choices and custom settings. Is that a bad thing? Well I don't think so. Of course there are features on my Nikon Speedlight that I like having, but I could work just as well without them, it's all about what you actually need. For me, the controls on this gun score well because of their simplicity.

First the power. This model, the Nissin Di622 has a guide number of 44 and is compatible with Nikon bodies from the D40 to the D200 (see the complete list for both Nikon & Canon below). I’ve already mentioned in other reviews how important it is to buy a gun that is compatible with your body, and it really is the key to getting the best performance. The Nissin Di622 offers TTL Auto exposure and a Manual range of 6 stops. The Auto Zoom function works from 24-105mm and that range can be extended to 16mm when you use the pull out diffuser. It also offers AS assist to help with focusing, and for Nikon users, FV lock, Red Eye reduction, Rear Curtain sync and Wireless remote operation. Like the controls, the specification may seem basic, but what else do you need on a gun? 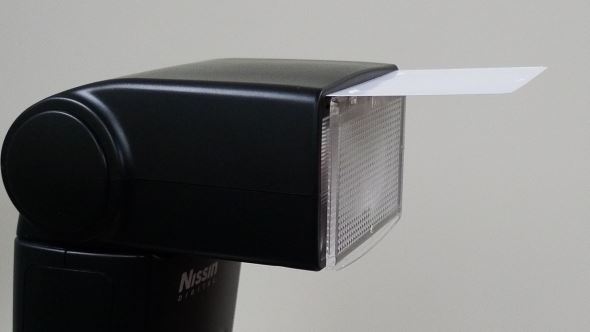 I've already mentioned the instructions, but they could really do with a tweak in places because of the poor translation. It's a shame really because it does make a couple of the guns operations a little difficult to understand. I have pointed these errors out to the distributors who have assured me that they will look at them and correct them. The instructions take you through the guns operations in a step-by-step way that is just about understandable - and also a little amusing in places! As usual it really is worth reading the instructions and especially the guide number table; I found that very useful for shooting on a manual setting.

How does the gun work? Well to switch it on or off, you press and hold the Power button. The gun has an energy saving device, Auto Off after 5 minutes and a Sleep Mode after 30. I found that the recharge time back to full power is around 5 seconds with ordinary batteries, which is a bit slow, but it would of course be quicker with rechargeable batteries. I think the recharge time is acceptable considering the price, and the gun will fire approximately 200 flashes per charge.

Using the Nissin Di622 in TTL mode is where most people start and it coped pretty well. I took a range of shots, all on TTL with my D200 on Auto, inside and outside to give it a thorough test. Inside the shots were evenly lit throughout the zoom range and despite a tiny bit of over exposure outside on a very sunny day, I thought the results were very good overall. I also found shooting on manual very straightforward indeed, using the mode button to increase or decrease the power by one stop increments seemed accurate. It can be a little slow to operate, because to increase power you have to press the mode button from max to min, then return to a max setting, however it's no big deal when you get the hang of it. I thought the Nissin Di622 flashgun worked pretty well and the range of shots taken were consistent throughout.

So would I buy this gun? The answer is definitely yes. To be fair, the Nissin is a stripped down, more basic version of a Speedlight, but it does offer all of the key features you would expect a flashgun to have. Using the gun on TTL gives good quality images that most photographers would be very happy to achieve and the six stop range on manual setting is more than enough. It doesn't have the finer controls or features that you find deep inside the menus of a Speedlight, but one can argue that not everyone needs them, or for that matter, would actually use them.

The long term quality of the gun is not easy to assess, but the Nissin Di622 is well built and should stand up to a bit of wear and tear. Nissin have been manufacturing flashguns for many years and one would expect that all their years of research and product development will have ironed out any major problems and for that matter, minor problems. So if you want a good, basic, medium powered flashgun that delivers good performance with some style, the Nissin is for you. It is very competitively priced compared to other flash guns of that power on the market. So if you are looking for a decent flashgun, forget the 'big' brands and take some time to look at the Nissin range.

If you have any questions about the Nissin gun, Speedlights or studio flash, just drop me an email.