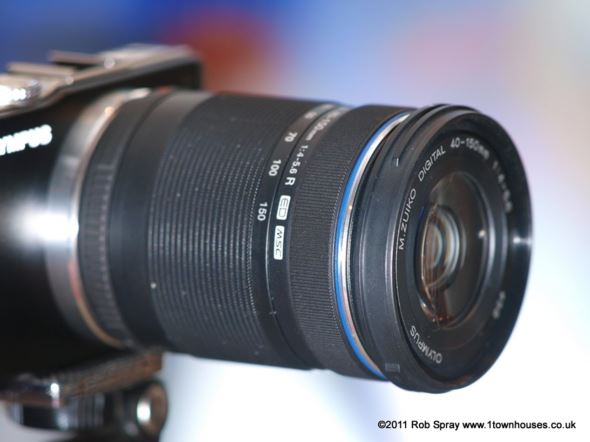 Although there's more appreciation of wide angle photography, the first item on most new enthusiast's shopping list is still, almost always, a telephoto zoom. Kit lenses have their place but nothing begs disappointment like rushing out on Christmas day to photograph birds and finding that they are nothing but distant dots.

The 80-100mm equivalent reach of kit lenses plainly isn't enough. It's not even enough to overcome the mental cropping that many beginners have in spades. Birdwatchers know that for actually shooting birds (photographically) in the field you need some serious optics but the lens most newbies end up buying is a cost effective compromise. That's a medium telephoto reaching to the equivalent of around 300mm. Of course it depends on the crop factor of your sensor what numbers you need to buy. For the 2x factor of micro four thirds that's 150mm... so surprise, surprise that's exactly what this mid range zoom tops out at. It picks up from 40mm, neatly leaving no gap at all between this and the kit lens.

Many micro 4/3 lenses appear to be ground up redesigns. This might be, but the feeling here is of a full size one made lean enough to scuttle down a catwalk. Compared with the 'full size' option this lens is actually very slightly longer – and remains so when extended. You could of course use the full size, older version on any m4/3 body using the MMF-2 adaptor (which adds back 20mm to simulate the mirror chamber of 4/3 SLRs). The front element is very slightly smaller on the junior model but it is clear that the utmost effort has been made to maintain the same level of performance within a much thinner shell. 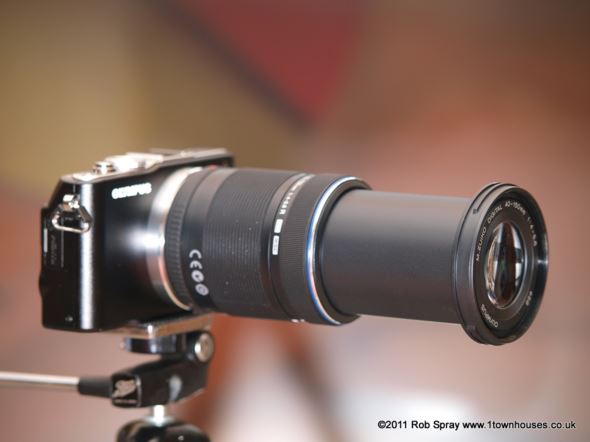 My, how you’ve grown. It’s nearly doubled in length at 150mm

The full size lens extends in three sections and that clearly just wasn't possible here – another telescopic tube would have added unacceptable girth – so this expands with just one. Although it almost doubles in length it is admirably stable. The close tolerances necessary to fit all the gubbins in seem to have also turned out a mechanism devoid of the slop and rattle which is typical of non pro lenses. No claims are made as far as weatherproofing is concerned (there's no rubber gasket for the mount) but the gaps are very small.

The diet means there's no rubber grip for the zoom or focus rings. That's no problem for focus  which is super smooth but the down side of the precision fit is that the zoom mechanism is a little stiff. Still smooth but not light as it has to pump out that full extension in less than 90 degrees of rotation. 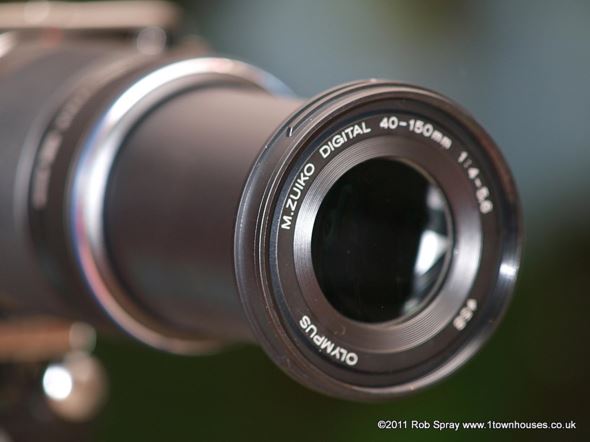 The design retains not only the 58mm filter thread of the 'full-size' version but also the same bayonet fitting for hoods and accessories. The lens doesn't come with a hood so I was delighted to find I already had one which would fit. I don't use hoods as much as I should – I never use them underwater – but they protect a tele like this against flare from light incident outside the field of view. The bayonet can also entertain the MCON-01 macro adaptor.

No one would buy this lens to use it at the 40mm end but remember that just beyond this point you get into portrait territory. Luckily, since this is a small and not especially bright lens, you can rely on the large format sensor to give you some creative control - certainly more than a typical compact - so don't forget about those intermediate focal lengths. Beyond 70mm variation is usually just to allow framing before the holy grail of the far end, 150mm is the equivalent of 300mm in old money. The angle of view varies from 30 (40mm) to 8.2 degrees (at 150mm), I wish brands would start selling lenses on this basis as the old 'equivalent' shtick is getting really stale now – we poor reviewers have to scatter it through almost everything we write! 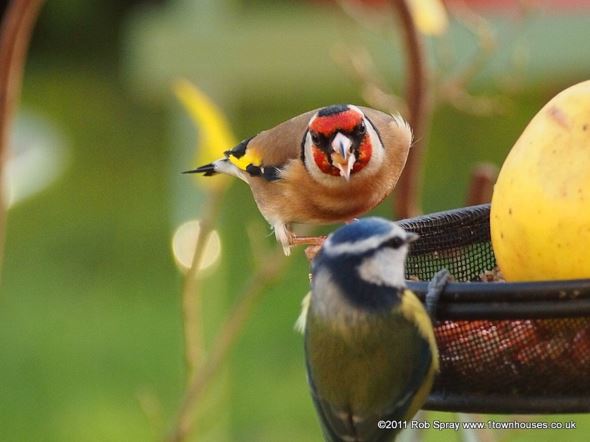 Angry birds 2 – just when you thought it was safe to go back to the birdtable!

Once you get to 150mm you have about 10x more magnification than the start of a basic kit lens and just over three times more than its full reach. That's a handy boost but don't get carried away, you won't be counting the eyelashes on badgers in the next county! This is, however, an ideal start for accessing your urban and domestic wildlife. As this is MSC badged (Movie and Stills Compatible) it has fast silent focus for video shooting. To me the best larger sensor shot video looks streets ahead of typical camcorder footage – and so you can have a shot at that too. Quite a bonus. For more serious, aspirant twitchers the 75-300mm may be a better investment – and that's MSC grade too.

Steady as she goes 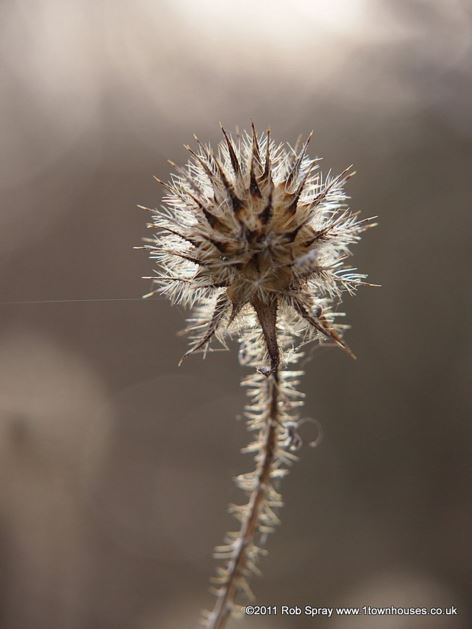 Details can be pulled in, minimum distance 0.9m (about 3ft)

With a tele lens you normally need a course in holding nice and steady but if you pair this with any of the Pens their in-body stabilisation will let you shoot roughly 3x slower or 3x darker than you might expect. The usual handholding rule of thumb (shutter speed = 1/equivalent focal length* = 1/300th zoomed in) still applies if you pair it with a Panasonic G Series - a mono or tripod and good technique will help at greater magnification. Photography at distance needs care and viewfinderless cameras don't foster good body position, the VF-2 eye level finder is worth its weight in gold just for the way it lets you steady the camera against your head!

At the long end the maximum aperture of this lens drops a stop to f5.6 – typical for an affordable tele lens. This means that the best results will be in bright conditions, those let you keep shutter speeds up and maybe allow you to close the aperture by a stop or so to work in the sharpest range of this zoom. The lower ranges of this lens are a tad sharper than full zoom but the little fella holds up well, actually bettering my copy of the full size version.

*OK so there is a use for that notation! 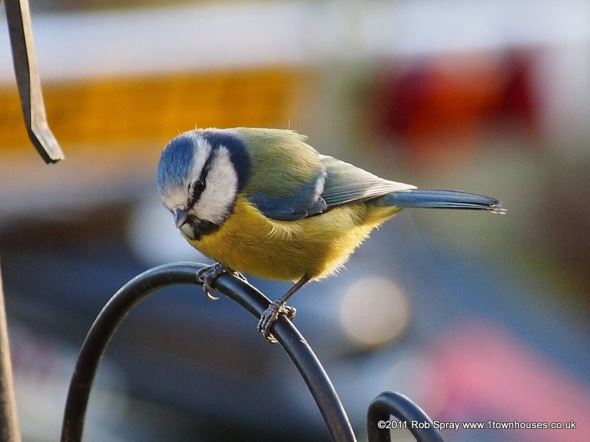 Blue Tit, waiting for a free seat at the seed bowl

As you build up your system there are always choices to be made and compromises to strike. Like all the Pen lenses the 40-150mm is tiny, light and perfect for travelling. Optical performance is great for such a tiddler and belies the crash diet it has been on to achieve its travel weight.

Fully extended this looks a little inappropriate on a slim Pen body but it does just what it says on the box. For casual tele shooting it's a no-brainer to tuck into your day bag, if you're after more serious wildlife work an eye-level viewfinder is a good buy and a bigger lens will get you closer.

A nice hobbyist lens, a real bargain as part of a double zoom kit!