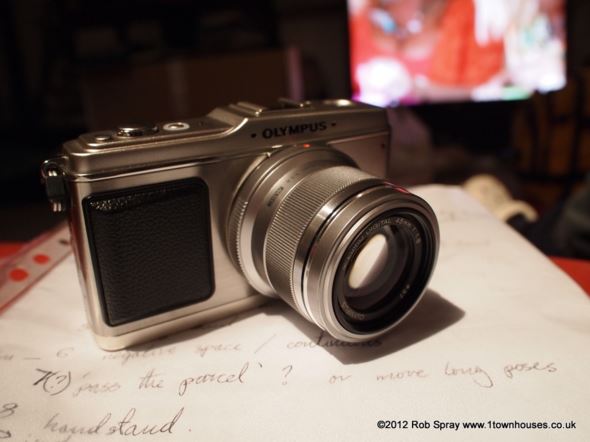 So what's your next lens? The early digital age was one of zooms... some good,  some bad, some dreadfully ugly. The megapixel race ran out of control and everyone now knows it was a headlong flight down a blind alley for too many wasted years. Lenses too suffered from the male folly of dimensional madness – bigger, wider and longer. Thankfully a recent collective epiphany has brought us back to photography rather than the optical arms race. So back to that question...

...well in a moment! Of course at the top end of mortal photography 'full frame' has been full on. Bigger sensors for better pictures by technological brute force seems logical but it's not the solution for backpackers or the majority of us who don't want to look like looming paps at every party. For the burgeoning mirrorless set there's a move to small, light, bright primes. Now we're ready... 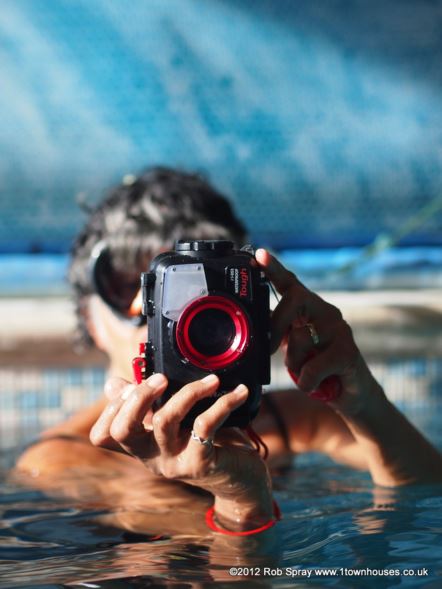 Camera on camera – subject isolation is spot on

Maybe you're considering building up a bag of primes rather than general purpose zooms (although you're allowed to have them as well as). The mirrorless revolution has made this even more appropriate as those cute little bodies beg for super compact lenses. Fashion sets trends across the board but there's so much to be said for being in the vanguard. Micro four thirds has reached a sweet spot and is now pumping out lenses (good ones too) with the kind of vigour that rival ranges must dream of. Some of the staple kit lenses are already on their fourth iterations!

Panasonic led the prime rush from the off by establishing a solid range (8mm, 14mm, 20mm, 25mm and macro 45mm) and now Olympus are returning fire with their 12mm, bodycap 15mm, revised 17mm, 45mm, macro 60mm and 75mm. The little silver job we're looking at here is the 45mm 1:1.8 – which might seem like it duplicates the Lumix macro but is actually a very different animal. The m.Zuiko is much smaller, brighter and cheaper. It looks as though it's the twin of the 12mm f2.0 but that's a swanky luxury item – lots more metal and a cunning focus ring which slips back and forth to engage and reveal a Depth of field scale. The Olympus 45mm is just plain, well made and neat. The mount and fore part of the barrel are metal; the rear, focus ring and bayonet/filter thread are poly carbonate. Even though this is a bright lens the filter thread is a tiddly 37mm – those aren't going to cost much! 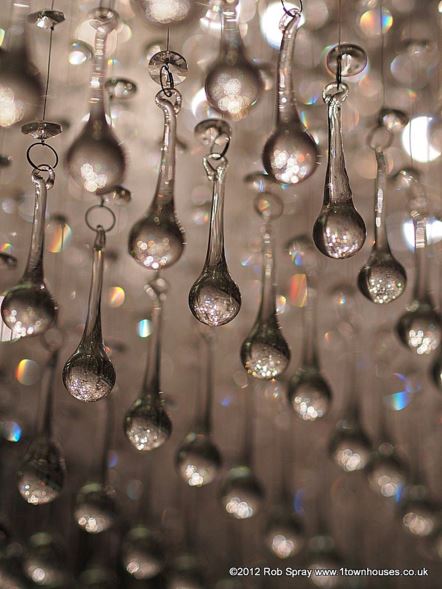 Treated to the Micro Four Thirds 2x multiplier, the 45mm has a field of view equivalent to a 90mm full frame lens. Because it's so small the angle of view (27o diagonal) can come as a bit of a surprise but it's bang on spec. It's in classical portrait territory for which it is superb. The f1.8 aperture gives great scope for subject isolation and there's no penalty for using this lens wide open. As logic demands there's a modest improvement in sharpness from 1.8 to 2 or 2.8 but that is the refinement from extremely sharp to extraordinarily sharp. This lens tests out of its skin and is free from significant diffraction softening way beyond the point pub bores predict. It is optically special and really doesn't need to be priced this cheap – read through a few of the tests online and see how it kicks bottom against much larger and more costly lenses on competing systems.

As a point of interest, the hood bayonet is the same as on the 14-42mm kit but although the set of three accessory lenses all fit they don't all behave. The macro lens is OK but the wide and fisheye units produce an extreme, dreamy blur. There's no hood included which is perhaps more forgiveable here than with the 12mm, which is a much more costly lens. For some reason Olympus haven't set out tiered lens micro ranges as they did with full size Four Thirds so you have to work out for yourself how super or standard everything is! I reckon they've been too busy designing to sort. 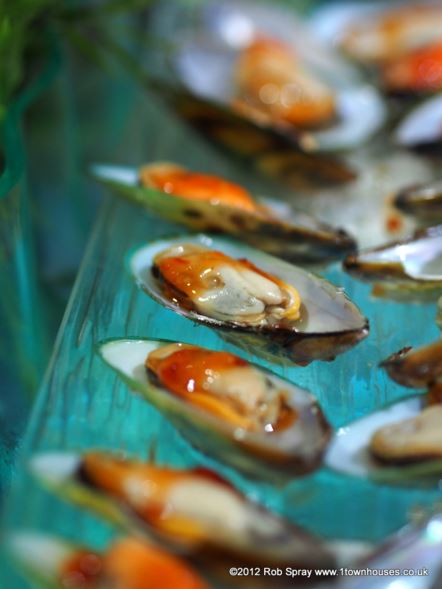 Show us your mussels! Picking out plated molluscs...

If it's so perfect why don't you marry it?

Honestly, my domestic arrangements are complicated and I'm already paying support to my last favourite lens but this little one is ready to turn heads and tempt you into a fling. If it has a down side it's that the minimum working distance is 50cm so this is no macro lens and occasionally tempting small subjects just aren't viable – unless you take advantage of that tiny filter thread to pop on a close-up 'filter'. Otherwise small product shooting is off the menu, which is a shame as it shares a lot of tick boxes with portraiture.

Out and about the 45mm feels very right on the Pens and the OM-D. Compared with the expanding kit lenses it stays stubby, looking and feeling very like a precious Agenieux TV lens I used to use – aside from the modern absence of an aperture ring. At present it is available in silver only, which is jarring if your life is colour coded but looks pleasingly boho on a black OMD or E-PL3. On the slightly rounded silver E-PL2 it looks a little techy but fitted to the classic E-P1 it couldn't really look any better – but the P1 does that to everything.

Of course it's all about the aperture. Amongst the piles of primes you're no one if you are darker than f2.0 – phew, here we're f1.8. Arguments abound over equivalence but light gathering is by the numbers and the potential for depth of field control is stellar – as you can use any aperture available. The results speak for themselves. Colour rendering is superb and the now vital bokeh is soft, smooth, even and perfectly circular. It's not as slim as a pancake (the focal length is too long for this to be simple anyway) but makes an easy tote around choice and on its own it disappears into a pocket or the smallest bag. At 116g having it tag along isn't going to tire you out. 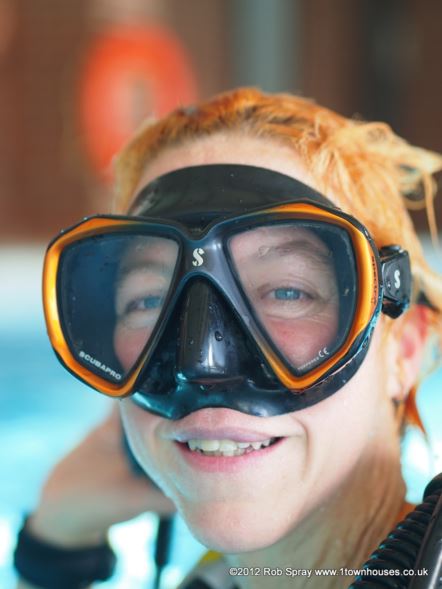 The 45mm is portrait friendly, and for friendly portraits. It's a great angle of view and distance for consensual shots, not distant paps picking off royal lady buttons. That's ideal for the defensible kind of intimate photography that needs a smile and sometimes a little cheek rather than a big tripod and a lawyer. I handed it to a few random folk and all were able to turn in a pleasant portrait, even my friend Nige who claims not to know one end of a camera from another squeaked some good ones!

At close portrait distances, with a face filling the frame, minimum depth of field is less than a centimetre and drops off fast. Backing off to a more practical 3-4 (1-1.5m) feet for a head and shoulders shot gives less than 4cm. That puts you in control of the emphasis of your photo, but does make choosing your focal point important, better to pick an eye than have crisp nose hairs dominate. The lens isn't harsh and won't have moody teens traumatised by their manky, blocked pores - unless you want them to be! 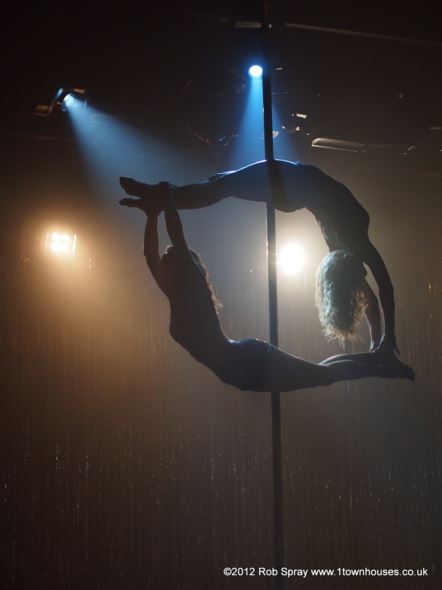 Circus circle – aperture blades are circular like the dancers!

As a bonus on a recent trip to Edinburgh I was conscripted to help a poledancer in distress and the 45mm proved perfect for stage shots from the cheap seats. The focal length worked out well but the maximum aperture was the clincher, I could keep ISO down, shutter speed up in the very varied and often dark conditions.

Faces are the subject many people want to shoot better - here's a simple way to get results that will have friends and relatives asking for copies rather than asking you to scrub your hard disc.

When I reviewed the OM-D E-M5 I said that what set Micro Four Thirds apart was its choice of lenses. You can find rival mirrorless mounts with good primes and others which major on zooms but most photographers want both. Here's a ringing endorsement of the strategy that has built a big enough market share that there's demand and supply for special bits of kit like the 45mm.

It isn't big and grand but because it's a cunningly designed little prime it can give a star turn which zooms can't match. Compared to a kit lens it costs a little more money, but in comparison with lenses that can match it optically it is cheap. Set against decent zooms which can approximate its optical quality (aperture aside) is a conspicuous bargain. Do you often find that with your zoom you predominantly use just the ends of its range? The 45mm is 3 stops brighter than the tele end on a kit lens (consider that the 12mm is nearly 2 stops brighter than the wide end). The cost effective  route to subject isolation isn't a big sensor, it's better lenses.

A great addition to any utility belt!

Many thanks to Anne at Goeswell Dance School for taking me along to the Incredipole event at Centrestage in Kilmarnock and the buffet at Wing Wah Conventry for the best photographic opportunities used for this review.