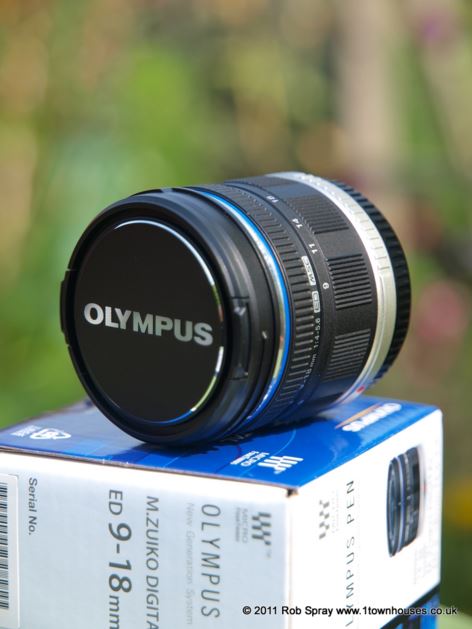 Whenever a new item of Micro Four Thirds kit rolls up I suffer from Father Dougal syndrome; struggling to decide if it's small or far away. There's no two ways about it, most Pen lenses are tiddly. If you've ever wanted to feel like Gulliver in Lilliput then opening the tiny packaging and picking out the miniature lens is a close simulation of receiving gifts from grateful little folk.

Micro four thirds lenses appeal as a trinket before you even fit them. I think this is a trick that Sony and Nikon have missed with their NEX and 1 systems respectively. Panasonic seem to be on a similar page but perhaps only the Pentax Q system can claim to look more appealing – although as a small sensor system it's really not in the same sector of the market. 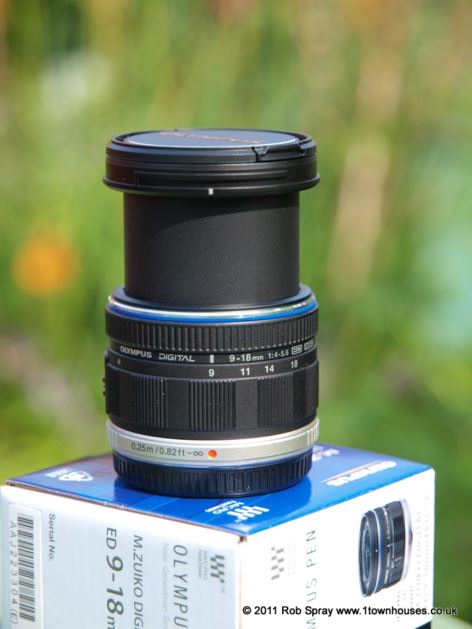 Jack on the box: a twist extends the lens for shooting

The Micro Four Thirds consortium were very shrewd when they designed in compatibility with the full size Four Thirds system. It avoided a chicken and egg situation where the new toys looked great but had limited use. That gave the new mount a real head start compared with their rivals but any new camera system (that aspires to be a system and not just a curiosity) needs to have its own full range of purpose built lenses. The range for this joint effort between Olympus and Panasonic now has a a pretty good coverage and is gaining strength in depth. The 9-18mm joined the total line up to provide a cost effective alternative to the Panasonic 7-14mm. Landscape grabbing scope and exaggerated perspective are now available further down the food chain.

This diminutive lens was launched with the last generation of Pens, and aside from its 100 degree wide field of view the big news then was that this is an MSC (Movie-Still-Compatible) lens. That plainly means that it's optimised for movies and stills... and translated that means it's fast, smooth and silent when focusing. At the time this was a big step up in focus speed and now with the latest Pens the system claims to be the fastest of any interchangeable lens cameras! I won't be able to comment on that bold claim until I get my hands on a third generation Pen... roll on that opportunity! 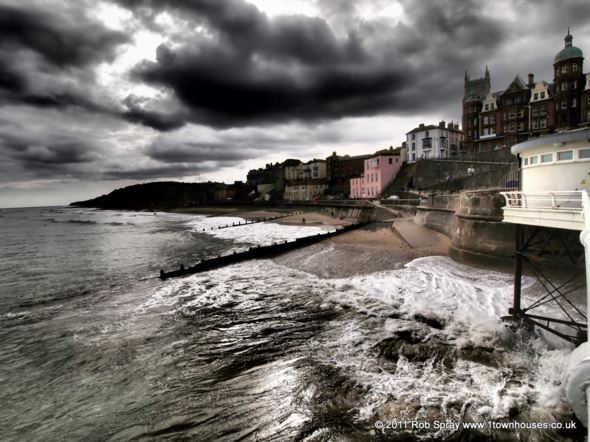 This 155g midget is the equivalent of an 18-36mm, ultra wide angle, zoom lens on a 35mm film system. That gives you a 100 degree widest view and 62 degrees when zoomed in. As an ultra wide rectalinear lens, not a fisheye, lines remain straight and buildings don't look like Easter eggs. Lens geometry correction is one of the in camera freebies with Micro Four Thirds as it is part and parcel of the format. Olympus don't correct chromatic flaws unlike Panasonic but those are well under control anyway.

The MSC lenses use single, tiny slivers of exotic glass to reduce inertia and allow faster focussing internally. It's significantly faster than the first generation of Pen lenses and puts the focus speed issue to rest with all bodies. It's not only fast but quiet too, ideal for video. The video recording of any still camera is very dependant on lens performance and this elevates movie making potential from occasional or enthusiast – as the Pens have always been very capable – to everyday. The look of large sensor video is much more filmic than a regular camcorder or compact. I reckon it's preferable and gives your home movies a very grown up feel. For manual photographers the 7mm wide focus ring is narrow but certainly in proportion with the lens overall. 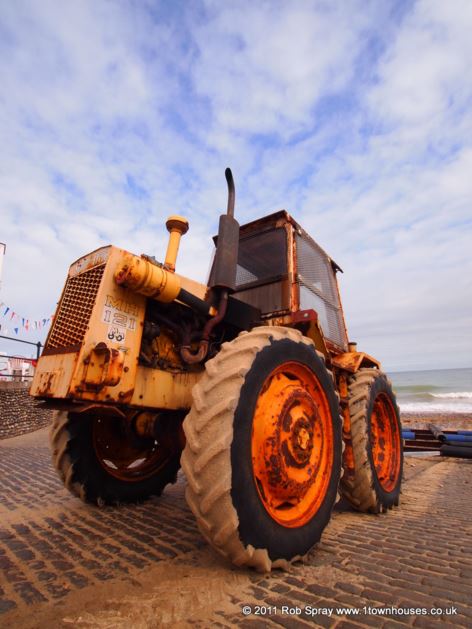 Although the 9 to 18mm is a fairly expensive lens the emphasis is on small size and lightness so the construction is all plastic, aside from the mount. This is one of Olympus travel ready collapsing lenses so it is doll house small packed for a trip and pops out by about an inch when ready for action. The magic is possible because without a mirror the rear of the lens can be so much closer to the sensor and the elements required can be very much smaller in diameter – a la rangefinders. It might be my unreasonable ignorance of optical possibilities but I would so love the lens to work in its collapsed state. In the storage position the retro look is perfect. Popped out ready to shoot it coincidently assumes almost precisely the same length as the full size Four Thirds 9-18mm lens.

There's one stop of light loss over its 2x zoom range... reaching from ultra wide to standard (old school) wide angle. With wide angle lenses I generally find myself using only the very widest setting – because that's exactly why I fitted it :-) but a little zoom range greatly enhances the versatility of a specialist lens like this. Whilst the 100 degree view of a 18mm lens is extreme the option to spin round to '36mm' for a fairly normal perspective is a boon. Although this isn't a bright lens that's less of a issue for wide angle shots where you are usually looking for inclusion rather than isolation. 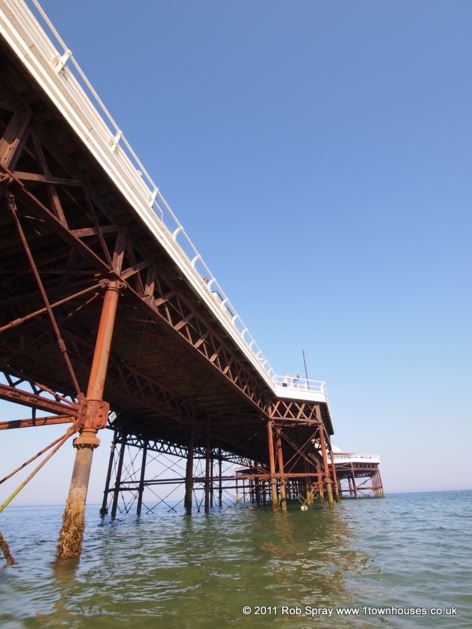 Cromer Pier - from the sea

Resting in your hand, or fitted, the lens doesn't look like a stereotypical wide angle. The front element is less domed than you might expect which allows it to take a modest 52mm filter – which doesn't have to be slimline to avoid vignetting. Close focus is decent at 25cm from the sensor but macro performance is not on the agenda – obviously. I guessed this might share the same optical formula as the full size Digital Zuiko 9-18mm but it's quite different – probably down to the fast focus mechanism. I prefer the smaller of the two, although the 4/3 version is unusually compact too.

This must be underwater love 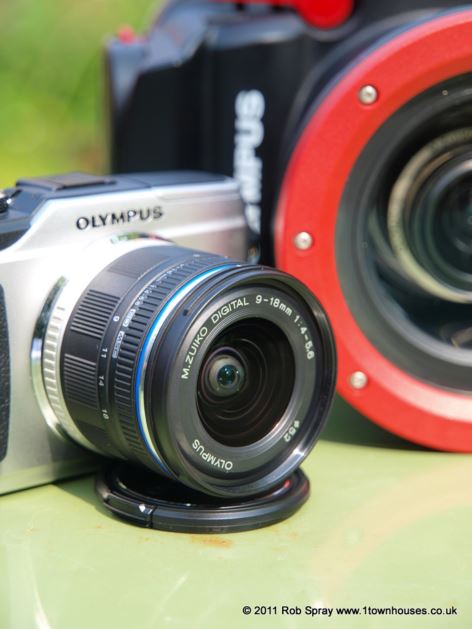 Ultra wide angle lenses are a vital part of any underwater photographers kit. Taking my Pen underwater has taken a weight off my shoulders, well more precisely my luggage, but until this lens arrived I was still tied to my 'full size' SLR for scenic shots.  Water gets in the way of your subject and if you can get in closer and still fit it all in you benefit from greater clarity and can light your subjects better. This lens is a treat to use underwater and especially good for shooting video. It has been a godsend over a summer of fantastic diving in North Norfolk. Overnight the Pen became my preferred 'camcorder' with this lens as it allows me to combine all the white balance and exposure control of the Pen with fast, silent focussing – and I can still shoot SLR quality stills with it too!

A shoal of fish (Bib) on the North Norfolk Reef

When diving with the standard flat port this lens would lose some of its 'wide angle' because the air to water transition adds about 25% magnification. So although I use the standard Olympus housing I've added a Zen WA100 dome port - which is like a baby bay window. This little set up has taken pictures for magazines and shot video for TV programmes this summer. Don't believe Olympus when they say the port can't be changed!

Dawn with a resident of Cromer Pier

So this little lens is very fast and silent to focus, ideal for video and no slouch for stills. But the real trick is packing a super wide angle 100 degree view into a featherweight wee beastie. Having that angle of view in a small, lightweight but high quality camera was a blast. If you're used to compromised compacts, mirrorless systems are a revelation. 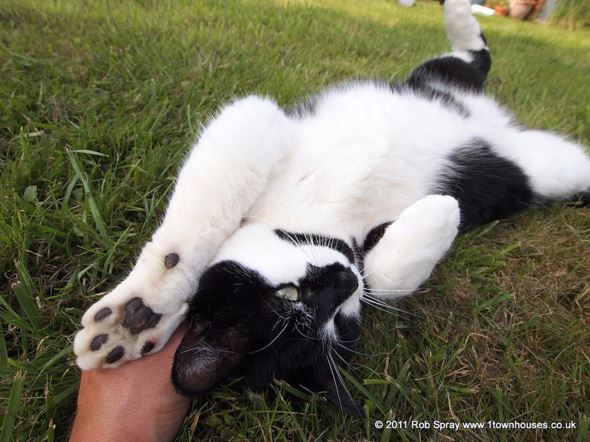 Olympus have kept their eyes on the goal of a compact system and I guiltily guess I also really enjoy the same kind of 'look at me I'm a giant' thrill as kids playing with toys do whenever I open a new Micro Four Thirds accessory. The lenses particularly seem strikingly small when sat beside the SLR lenses I normally use – and I already use some of the smallest you can get.

The M.Zuiko 9-18mm belies my fawning and performs well in its own right. It joins the range of 25 major manufacturer lenses in range bolstered by a galaxy of purpose built and adapted manual focus lenses. In that company it has key cast position and starring role to play in your camera bag.