It is just about possible for a reasonably clean individual to make a pair of pants last for eight days of wear. If you’re careful, one pair of pants can be kept on for two days solid without any real risk of your health suffering as a result. In order to keep the erosion of any one area of the pants to a minimum and ensure that the entire article degrades at an equal rate, after two days the pants should be rotated and worn back to front. This allows the same pair to be worn for a further two days. After this period the pants should be turned inside out and the routine of the first four days repeated, giving a total of eight days wear from one pair of pants. You may be left with a slight rash and some itching, but you will essentially still be ok.

Contrast that with my children. There are three in my household; my four year old son Reuben, my eight year old daughter Niamh, and my girlfriend’s daughter Rebecca who is seven. Jeans and tights are lucky if they last a morning without becoming horribly stained from mud, juice and who knows what else, whilst t-shirts and jumpers will only ever make it up to the first meal-time, after which they have to be soaked or burned. The day we get from dawn ‘til dusk without one of them tearing a hole in some item of clothing will be the day Beelzebub skates home from work. Their belongings fare little better. I could put Reuben in a sealed, padded room, dressed head to toe in cotton wool clothing, but give him a football and he’ll still manage to puncture it in a matter of minutes.

What better way to test the Olympus Mju Tough 8000 digital camera then, than to give it to these miniature demolition experts and send them out in to the world (or the garden) to take photographs with it? Just how tough is Tough? Let the games begin… 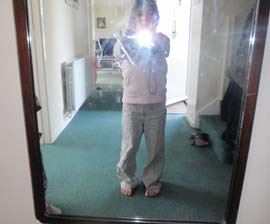 The idea was quite simple. After having a quick look over the Olympus Mju 8000 to see exactly what it was made of and how it operated, I was satisfied that it certainly seemed sturdy enough to put up with a fair bit of abuse, and simple enough that even an four year old could use it. It really does feel very solid and appears to be riveted together. Obviously, a more experienced user could probably get far more out of the camera, using one of the 19 available scene modes to perfectly match the subject of the photograph, but for now all I was concerned with was that the shockproof frame would be ready for the shock it was going to get. So with the camera set to Auto-everything and the Face Detection turned on, I handed the Mju 8000 Tough over to the children for the weekend. All I intended to do was watch how and where they used it and collect the images they’d taken at the end.

The first place they headed was the back garden, Rebecca pausing briefly on the way to take a quick snap of herself. It became clear when reviewing the pictures later that one of the favourite subjects for kids to take pictures of is themselves. Out in the garden, pretty soon the camera was moving from grubby hand to grubby hand as Niamh, Reuben and Rebecca passed the camera around and took pictures of one and other playing up to the camera with various cheesy grins and model-esque poses. It’s interesting to note (and quite impressive) that even when they were in full “swing” (pun intended) the little Olympus still managed to follow the action and grab more shots than it missed. Take into account that in was in the hands of people unlikely to be versed in the art of panning and tracking and this performance becomes even more admirable.

Now, I don’t know enough about the technology behind “face detection” to know whether or not it works on animals as well as people, but I’d hazard a guess that it probably doesn’t. However, this didn’t appear to be a problem as the children managed to get pictures of Missmo sunbathing on the grass and Luke popping out in his ball. In both cases the lighting was far from ideal. Outside it was a beautiful day with very harsh light, whereas inside in the shade it was much flatter. The camera coped with both, retaining all but the brightest of highlights on Missimo’s fur and using the auto-flash to get some texture into little Luke’s portrait.

The next destination was the large field behind the house where the kids all take great pleasure in ruining their clothes by rolling down the hill until they are so grass stained the original colour is almost unrecognisable. Niamh took it upon herself to take pictures during this activity so she could see what she looked like whilst rolling. As you can see, the results were, well, mixed, but the camera remained intact during and after the whole roly-poly journey, more than can be said for Niamh’s jeans…

With the children hosed down and changed as required, it was off to the grandparents’ house for an Easter Egg hunt. By now the Olympus Mju 8000 had found its way into Reuben’s hands, and he remained in control of the camera for the duration of the car journey, snapping at anything and everything he saw on the way. 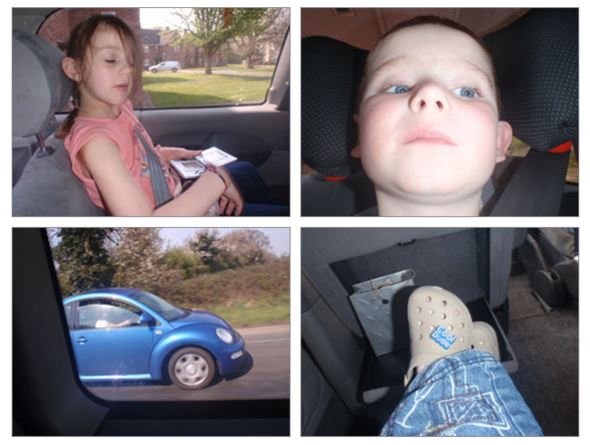 Reuben took many, many pictures of himself. I'm beginning to wonder if all children are like this, or whether mine are particularly vain.

An experiment in durability

By the time we arrived at the grandparents’ house the Mju 8000 had been used extensively by each child and was still none the worse for wear. As I pulled open the sliding door, three exited children, in a rush to get their hands on some chocolaty goodness, piled out of the car. Some where in the commotion, the Mju slipped out of whoever’s pocket it was housed in and tumbled down on to the pavement, where it was promptly stood on. There was that kind of hushed silence you only get when somebody has done something terrible and everybody else is waiting to see what’s going to happen. With my eyes almost closed, I bent down and picked up the camera, or at least, what I expected to be the remains of the camera. I could hardly believe it when it came away from the pavement in one piece. Cautiously, I opened my eyes to inspect the damage. None. There was NO damage. Well, a couple of little surface scratches on the metal, but I couldn’t have sworn that they weren’t already there. Just to be sure, I turned the camera on and fired a couple of test shots. Absolutely fine. Incredible. 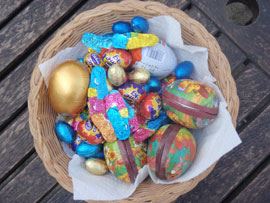 By now I was pretty sure that the Olympus Mju 8000 was nothing short of indestructible, so I was quite happy to let the three mini-people disappear off on their Easter Egg hunt and fight over the camera on the way. It soon became apparent that Reuben’s favourite subject was the chocolate eggs he was collecting, whereas the girls were much more artistic, photographing the flowers as they searched for eggs amongst them. By the end of the day and the weekend, the little Olympus Mju 8000 Tough had lived up to its name. It had been dropped, stepped on, argued over, and covered in chocolate fingerprints, but it was still in one bit and it was still fully functional. By contrast, I was knackered. 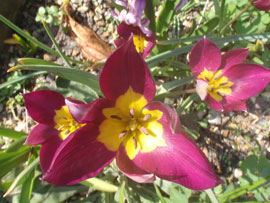 That evening, as I went through all the hundreds of snaps taken by the children over the weekend, many made me smile. Some because they were just plain funny, others because it felt like I was getting a little insight into the world of the little people. It occurred to me what a great idea this had been, simply handing a camera over to a group of under 9’s and seeing what they come up with. In fact, I’ll definitely do it again and heartily recommend that if you have young children, you give it a go too.

One proviso, though. Make sure the camera’s as robust as the Olympus Mju 8000 Tough, by name and by nature. 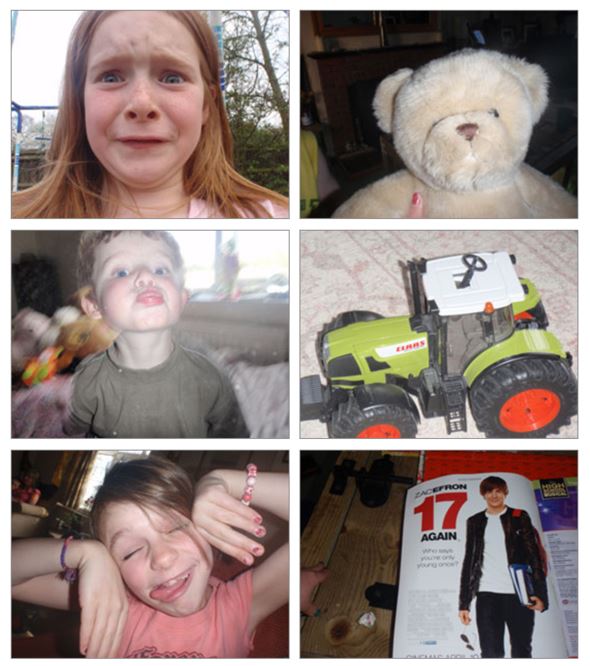