Cute wetsuit for the fastest lens in the West: PT-050 Housing for the XZ-1

Every new camera is accompanied by a list of 'must-have' accessories, which seldom arrive with the same speed as the main feature. I sometimes suspect we demure Brits aren't quite at the head of the global queue... so imagine my surprise when no sooner had my last two review candidates landed than the underwater housings for them assaulted my doormat too. As I'm a diver, no camera is worth its salt if it can't be dunked in the sea!

Those last visitors were the new Olympus twins - the XZ-1 lens fetish compact and the latest Pen, the E-PL2. Now both can boldly go where no man has gone before (without getting wet). It's an intriguing comparison between two closely matched cameras right on the border between enthusiastic amateur and budding pro marine snapping.

The new housing for the XZ-1 may be the the junior system (the new Pen housing gets its own review... here) but expectations are sky high. It has a tough task ahead, to re-establish a line of serious underwater compacts that took a sabbatical in 2006 when the C7070 ceased production. Olympus built a system around that model and it's a testament to how well it suited underwater shooting that it's still sought on eBay and still turns out exhibition prints. As a worthy successor the XZ-1 has the just right credentials; great lens, lots of control and designed-in dive friendly features.

Olympus' cases now all wear a slick corporate uniform of black, red and clear. The black front helps mask any spilt flash light, I think the red is just for light relief! The polycarbonate material is very light but ultra tough so neither will it lay waste to your luggage allowance or flinch under ham fists. Once housed, the little XZ-1 tips the scales at  just 800g, the rig is really very svelte (only the handy 67mm threaded port takes up any significant space), even with a strobe it's no bloater. 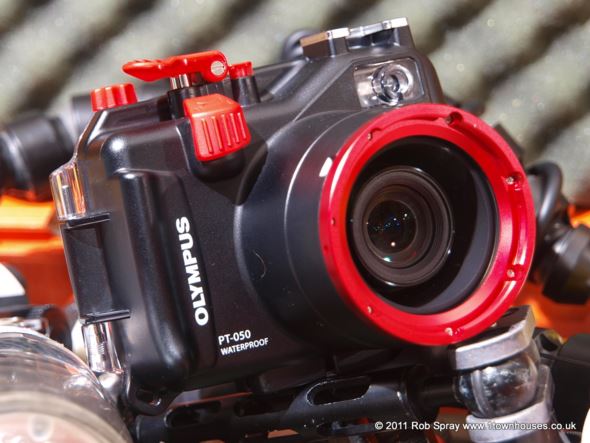 The threaded port (67mm) dominates what is a pretty small case

The PT-050 is tightly tailored to a bare XZ-1 but the threaded port means you can easily add wet lenses. These are such a simple idea but unlock great versatility. This is doubly important as the 1cm capable in-camera super macro AF is unfortunately limited to fully wide (28mm) and won't fire the flash in any way. Since standard macro forces you to back off from your subject – losing magnification -  for smaller subjects external macro lenses are needed and also allow you  the full zoom range and still focus within a few centremetres – winning it back. The real prize is the option to use wide angle lenses – you lose width with any flat air-to-water interface and so 28mm drops to more like 35mm. A typical wet lens will get you back to 20mm and with a dome you could be enjoying 15mm. The joy of wet lenses is that you can carry macro and wide options on any dive so whether you encounter whales or winkles the world is your oyster. I was filled with warm C7070 nostalgia and it felt like having an old friend back again. 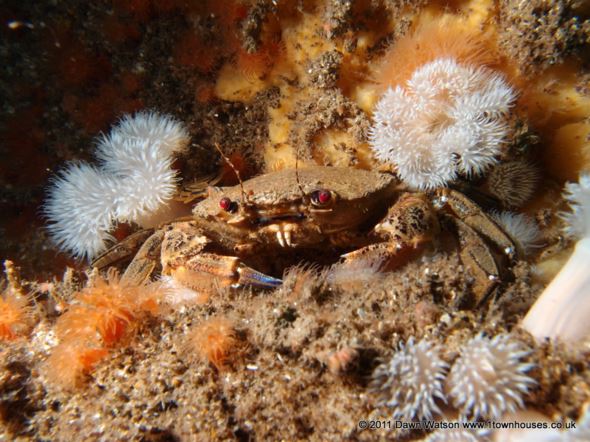 This is a great setup for UK diving, compact and tough (like this Velvet Swimming crab)

The XZ-1 has one fibre port (it's easy to share for a second strobe) in the centre of a clear flash window which fires at a generous slide-on diffuser placed well forward – level with the end of the port. This means you can use it without a strobe and upgrade later if you fancy one. The XZ-1 can use a wide variety of strobes from dedicated digital models to ancient non pre-flash compatible slave triggered units. It has the option to select manual, TTL or RC flash control in any exposure mode. That's something its competitors can't, the LX5 operates only in TTL and the G12 has to choose TTL in auto modes OR manual in Manual. The latter lets you tune a look and have a TTL strobe magically sort out your lighting – a big deal when you have that exotic lens to play with. 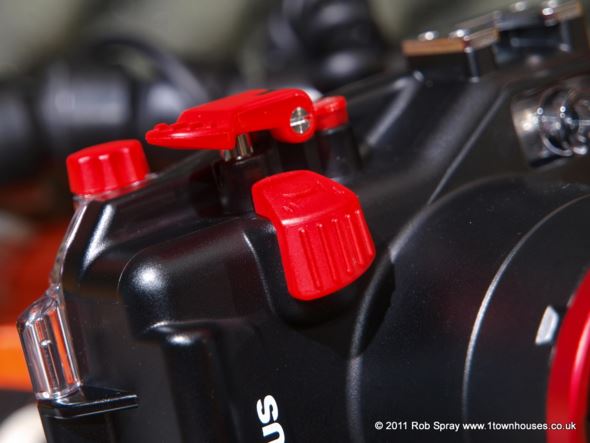 If you've taken pictures underwater you'll probably know the limits of an on-board flash (if you don't, have a look at the underwater photo guide or my review of the Fujifilm EXR200) so a well thought out method to add one is de rigeur. The option to go without is useful but frankly unless water is super clear you have to be very close to avoid 'backscatter' – flash lit scenery shots can be tough with no external strobe. The XZ-1 is cracking in low light but ambient photography underwater is an acquired taste. 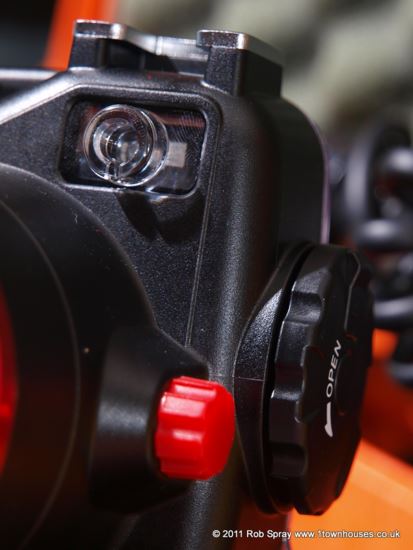 Have you got a light buoy?

Although the case alone is positively buoyant, you do get a trim weight to rein it in. If you build up a system with wet lenses and a strobe with its tray and arm, things normally become pleasantly neutral on their own.

I was pretty pleased with the results. We tried it first with a single external strobe in a pool (where the odd lighting was my choice ;-)). The XZ-1 is a treat to to run and adjust underwater, the control knob for the lens surround dial makes it intuitive to use as it defaults to the primary parameter in any mode. Secondary controls are under button control, in place of the rear dial around the control pad which, sensibly in my view, doesn't make it through the rear panel of the case. Complex controls can be a weakness and it's much better to have simple, waterproof ones! A good  underwater housing will let you make the most of what's in it - and this one is a star.

Set up for a dive: with Fantasea focus light and UFL-2 strobe (and Dawn)

The XZ-1 ranks amongst the best compacts for focus speed and that big bright lens has few problems even in the low light of murky dive conditions. The speed actually takes a little while to get used to but the lever shutter gives good feel for the half pressed position. We paired it with the Olympus UFL-2 strobe, dedicated TTL makes its flash use very efficient and the pair are nicely matched even if the strobe looks a wee bit large on land. I was very impressed that next to none of the underwater shots were out of focus – that's not to say it always got the bits we wanted sharp, but that was down to the challenge of framing as we floated, flapped and swam.

I'm a fan of the cam lock catches Olympus now use, as the seals are piston mode 'o' rings there's no need for sprung latches. Cams can't slip open and they don't shred sea soaked hands either. I generally rate own-brand tailored housings ahead of generic cases as they are much lighter, more comfortable and usually smaller. The quantity they are produced in allows economies of scale and design which are an obvious benefit.

These cases are rated to 40m, so super deep wreck divers should look elsewhere. Not because the cases magically fail at 41m but because the button springs are weighted to resist pressure at their design depth. I've taken my 40m housings down below 50m and they still work - but there wasn't much button travel left! The benefit is that the controls are light – a 60 or 100m housing has to be sprung that much harder. There are pros and cons of small cameras and housings and the layout of buttons is one area for compromise. The clearly labelled rear buttons are smooth and easy to use but have to be clustered close together. They're stepped to make them easier to pick out with gloves and keep a logical layout – but if you have fingers like baguettes you'll have to take a bit of care.

The controls couldn't be much clearer, decent layout too

Both the E-PL2 and XZ-1 cases arriving at the same time made for a fun face off. Both perform well and they sit either side of a nominal divide. There's not a huge difference in the pictures you can take but the XZ-1 is the choice for the light traveller and the generalist. It will turn out great shots and the option of wet lenses saves you from the discipline of SLR shooting. Dawn has adopted it and I know a few others who wouldn't class themselves as tech heads who like that it can do everything but doesn't make them beg to take pictures – it carries it's excellent manners into the water.

The XZ-1 can pick out small, skittish animals even at distance

The PT-050 is a bit of a star – it's compact, with great control. The threaded port makes it one of the very best underwater options for a compact wielding enthusiast and direct control of that lens gives you more creative control of subject isolation than any other compact right now.

Pukka compacts are back!