Every new camera is accompanied by a list of 'must-have' accessories, which don't often arrive with the same speed as the main feature. I sometimes fear we demure Brits aren't quite at the head of the global queue... so imagine my surprise when no sooner had my last two review candidates landed than the underwater housings for them assaulted my doormat too. As I'm a diver, no camera is worth its salt if it can't be dunked in the sea!

My last visitors were the new Olympus twins - the XZ-1 lens fetish compact and the latest Pen, Now both can boldly go where no person has gone before (without getting wet). It's an intriguing comparison between two closely matched cameras right on the border between enthusiastic amateur and budding pro marine snapping. 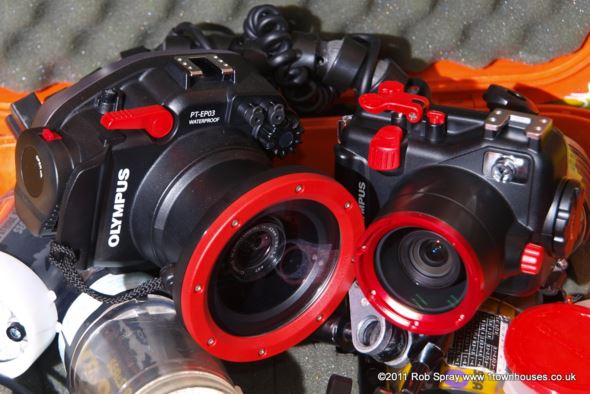 The PT-E03 and PT-050 compared: Big and little brothers under the sea

The E-PL2 gets underwater armour in the cobby, polycarbonate shape of the PT-EP03. I wish I'd been able to take these cases somewhere right away but Egyptian sharks aside it didn't work. I went for a nominal dunk before I could head off for my spring diving but a quick pool plunge can only tell you so much, real findings only emerge once the sea is playing ball. A lot of diving is about 'task loading' and so ergonomic considerations really bite when you are deep in the dark struggling with cold hands (your own!).

The predictable case of the dry camera

An EP03 packed with an eager E-PL2 is obviously heavier than a compact (roughly double at about 1.6kg) but less than half the weight of a traditional SLR system. The Pen provides a real alternative to bulky SLRs for divers who aren’t in love with big, hefty baggage. The E-PL2 case appears more generously proportioned than your average compact but there are several reasons for this, it's not just the size difference between the bodies. Primary cause is the interchangeable front port, Olympus play this down but it allows really grown up lenses to be used. Like most interchangeable lenses those need mechanical operation of their zoom rings which steals some more space. It's very grown up and functions very much like a very small SLR housing. 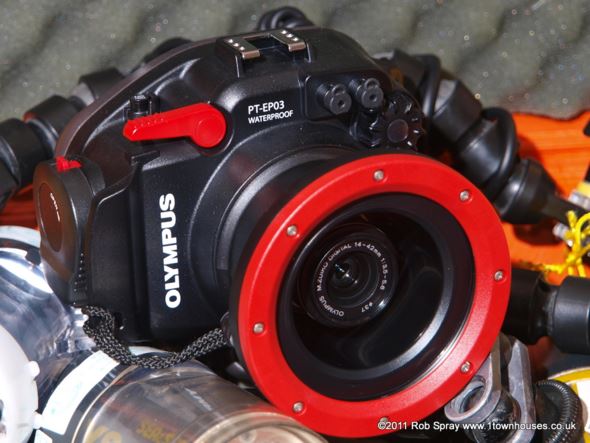 While compact cameras try to be a jack of all trades, the lot of the Pen (and any SLR) diver is a little more constrained. You choose a lens for the dive and it's usually one without the range or close focus of a compact. The upside is better quality images from its large sensor. The compact form factor of the Pen allows the case to be small enough to wear a wet macro lens – which works very well - but a wet wide angle isn't really practical. Of course you could (and probably should) do it properly, fit an ultra wide angle lens inside and slap on a dome port to get on level terms with SLR folk. The range of Micro Four Thirds lenses covers all the important underwater bases now. On the wide side Panasonic make an excellent, tiny 8mm fisheye and an amazing, small 7-14mm wide angle while Olympus provide a more modestly priced 9-18mm* (double these focal lengths for film equivalents). The macro choice is limited but includes the cost effective option of adding wet lenses (I was surprised how well this worked on the E-PL1 underwater – read the review here) or another Panasonic gem, their 45mm* macro. That’s the beauty of Micro Four Thirds, it’s a team effort. Third party ports let you exploit these lenses optimally but the standard one will accommodate the kit lens (* and those starred) while you save up! 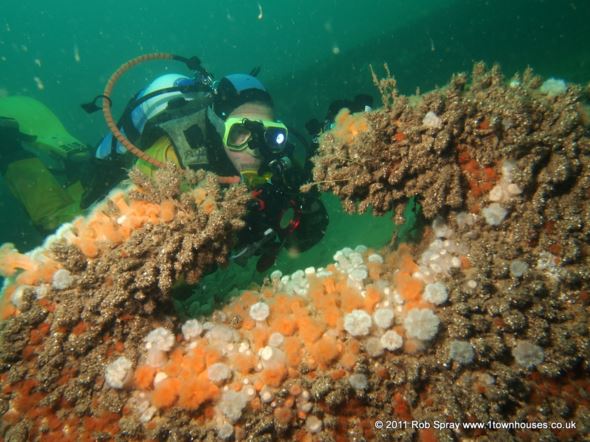 Dawn exploring a wreck off Norfolk - Thanks to Manta Divers

The front of house sports a pair of ports for optical fibre connected strobes (flashes to landlubbers) – wired connections are so last year. Fibre connections don't suffer from the corrosion which threatens any electrical joint which goes near the sea. The housed E-PL2 isn't intended to run without an external strobe. Aside from those fibre ports there's no flash window, this is an option for the diver who knows they will definitely be buying a strobe. These can be used for any optically triggered strobe as both have the option to run manual, auto, S-TTL or (my favourite) RC controlled external units.

My emphasis is always on artificial light but the Pens are SLR class at available light underwater so if that's your bag there's no need to be shy. My dome is on it's way so I can go shooting wrecks with it!

On the up after a great dive - look how clear that water is!

Whatever floats your boat

The housing is positively buoyant without extras. I never worry about this, adding a tray, arm and strobe will calm the most ambitious floater. In fact I reckon this is a bonus feature as otherwise accessories will almost always weigh you down.

Some pool shots might be a wee bit confusing :-) All the underwater shots are taken with the review cameras, but obviously they are always of 'the other one'. In the test configuration both cameras were on a fairly even footing at the wide angle settings used for these scenes.

The E-PL2 is faster to focus and snappier between shots and easily cycled faster than the small strobe I used at first, so I moved on to a bigger one! It can shoot continuously whilst triggering a slave strobe – which will give in before it does as you can use a thrifty 1/64th power flash setting. Conditions in the indoor pool were pleasantly clear but it wasn't bright by any means and I was impressed it had no trouble focussing -  but all the more so in the sea!

Unlike some dive magazines which revel in taking poor pictures to show how a badly used camera can foul things up I tend to think a half decent picture will show you what the potential is. Sharp, colourful pool shots give you an idea of how well you could exploit a camera. The E-PL2 is excellent on land and the simple axiom that the most important part of a racing car is the nut holding the wheel very much holds for photography too. The key thing with any underwater housing is that it will let you make the most of what's in it - and this does, so the results are down to you. 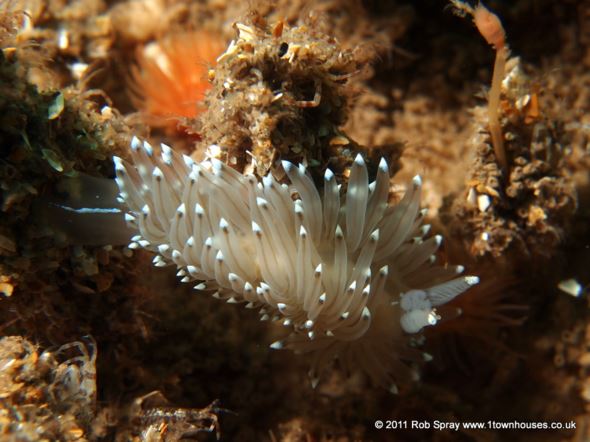 A Crystal Sea Slug, amongst the growth on a wreck off Norfolk

The most significant difference between the PT-EP03 and the case for the E-PL1 is that there's no  space for the VF-2 electronic viewfinder. As otherwise the cameras are quite similar, both very capable, I'd suggest if the viewfinder is a must-have for you then go for the earlier model. However, we used the EPL-1 EVF free last year and didn't suffer at all - so if you find that reassuring then the new model is for you as the case is noticeably smaller.

Which would I buy? It's a good question, they're kissing cousins but the PL2 is the latest trick. I prefer the look of it, it has my favourite Dramatic Tone art filter, a bigger 3” screen, slightly sharper pictures and improved low light performance from newer processing. The new Mk II kit lens is another reason to go for the E-PL2; it's a smaller, much faster, silent movie friendly upgrade on the Mk I 14-42mm. 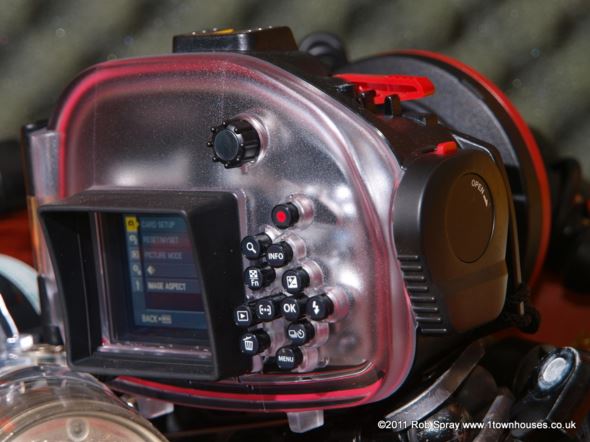 Back side: Buttons, mode dial and 3" screen

I'm becoming a real fan of the cam lock catches Olympus use now, as the seals are piston mode 'O' rings there's no need for sprung latches. Cams can't slip open and they don't shred sea soaked hands either. I generally rate own-brand tailored housings ahead of third party cases as they are much lighter, more comfortable and usually smaller. The quantity they are produced in allows economies of scale and design which are an obvious benefit.

These cam locks are much easier than the old style sprung, metal catches

This case is rated to 40m, so super deep wreck divers should look elsewhere. This isn't because the cases magically fail at 41m but because the button springs are weighted to resist pressure at their design depth. I've taken my 40m housings down below 50m and they still work - but there wasn't much button travel left! The benefit is that the controls are light – a 60 or 100m housing has to be sprung that much harder. There are many pros and cons of small cameras and housings and button layout of certainly one area for compromise. The clearly labelled rear buttons are smooth and easy to use but have to be clustered close together. They're stepped to make them easier to pick out and keep a logical layout – but if you have gloves on or fingers like baguettes you'll have to take a bit of care.

All dive housings must be functional but this is safely way more than just that. Olympus have a long track record in own brand cases and their latest have built on that, offering some of their toughest yet. At the same time they've refined their designs and these are some of their best engineered and simplest sealing too!

The PT-EPO3 looks a little plain but the big pay off is the chance to take the latest Pen underwater.  Its large sensor and interchangeable lens package halve the weight and bulk needed for SLR quality shooting on a dive. Don't be fooled, this is a gateway housing to serious marine photography and there's a growing band of marine Pen people who are knocking out some great work. We're showing prints from last year's E-PL1 and the new body and especially the new lens make this pocket Venus even more attractive

A gateway housing to grown up underwater photography