Advances in camera design count for nothing if you can't take them to your chosen location, never more true than when that location is underwater. Olympus' staunch support for divers leaves it standing high and dry as the only camera maker supporting anything more than its compacts underwater.

Own brand housings are produced on a scale which allows them to both include the level of refinement you might expect and to cost what might be considered bordering on reasonable. That's definitely not to say you can't buy other reasonable or well designed housings elsewhere but they are rarely combined in the same package. The PT-EP05L (and the very similar PT-EP06L for the E-PM1) are the third iteration of Pen housings and with every generation there's a combination of continuity and evolution. This time around you can do even more straight out of the box than with previous Pen cases. 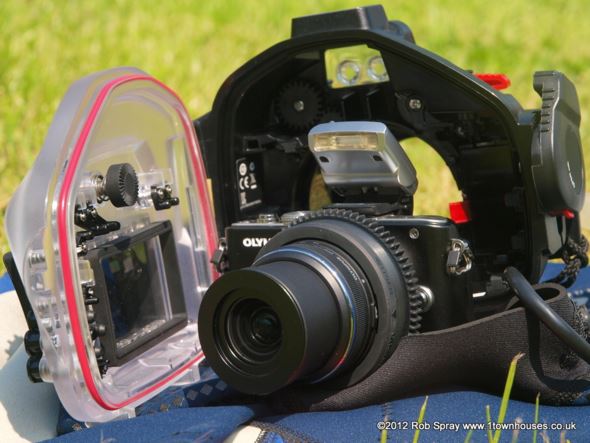 Putting its suit on, E-PL3 ready to be housed

A lot of water has passed under the boat since the first Olympus took to the water and the 'Lite' Pens have been swimming from their start. Every model brings a new housing which offers more than the last. This one may look like its forbears, in most respects it is very similar, but there are numerous developments. An entirely unseen upgrade is the increase to a 45m depth rating. It's something of an irrelevance but definitely indicates confidence, which is always good.

Most are drawn straight to the four macro lights around the threaded port window (we'll come back to that thread). Those are LEDs behind waterproof domes, intended to help focus close up. They can't light up a wreck but within a few feet they are quite effective. Powered by two AAA batteries - inside the case, beneath the shutter lever - with an on/off button outside on the front. Pen divers have wondered whether they would stop another port being fitted, the answer is no. The power connection can be unplugged so the bayonet fit port can be removed. Olympus aren't making other ports so the official line is that it's not interchangeable. Psssst... there's a good range of third party ports so you can house other lenses and head off down the 'micro SLR' route underwater. 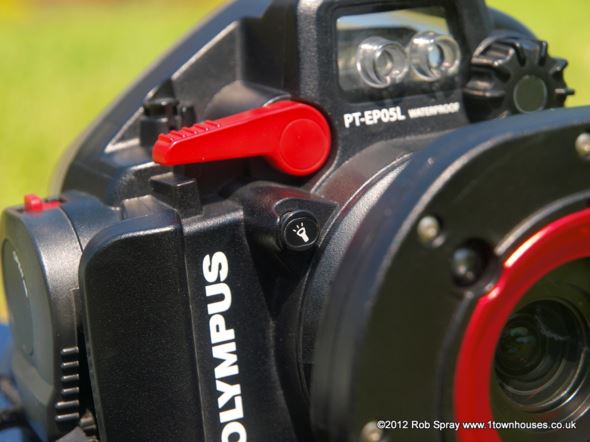 The light switch for the LEDs around the threaded port

That threaded port is what you should have spotted first, a great feature. I ranted in favour on the PT-050 and I'm smiling here too. The port on the first two Pen housings was roomy, it could also accommodate the 9-18mm lens which this can't. The port mount macro adaptor was handy but the lens was too far inside for a wide angle widget. This new port has been shortened and slimmed opening up the possibility of snapping sea slugs, seals or sea mounts all on the same dive. That versatility is a strength of compact systems, by adding large sensor image quality you have an intriguing package that other systems will struggle to match.

The very small and fast focussing kit lens makes this possible and the clip-on FL-LM1 flash which comes as standard with the E-PL3 (and PM1) plays a crucial part too. It's getting on for SLR powerful and fires through a glass-clear window into a huge diffuser, so can use it's internal flash for general underwater photography. You can also run external strobes from the pair of fibre ports in the strobe window. 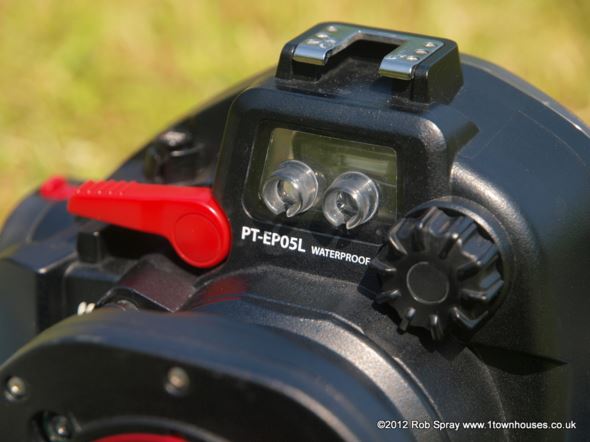 The E-PL3 can be the basis of a fully fledged setup which covers all the bases that a housed SLR should. If you know your camera market you'll have seen that the range of lenses that can be fitted to the Pen is vast. Its a perfect vehicle to travel some of the roads your photography could take...

Pick it up and take pictures... ambient shooting and flash lit results will be a cut above any compact – I should know I tried the best (the Olympus XZ-1) and this Pen can do better. It's a good comparison to make (read the review of the XZ-1 here) the XZ and its ilk are excellent but cannot match the detail and low light behaviour of a large sensor system. The one area that the 'turn key' EPL3 trails, the compact's is macro performance. 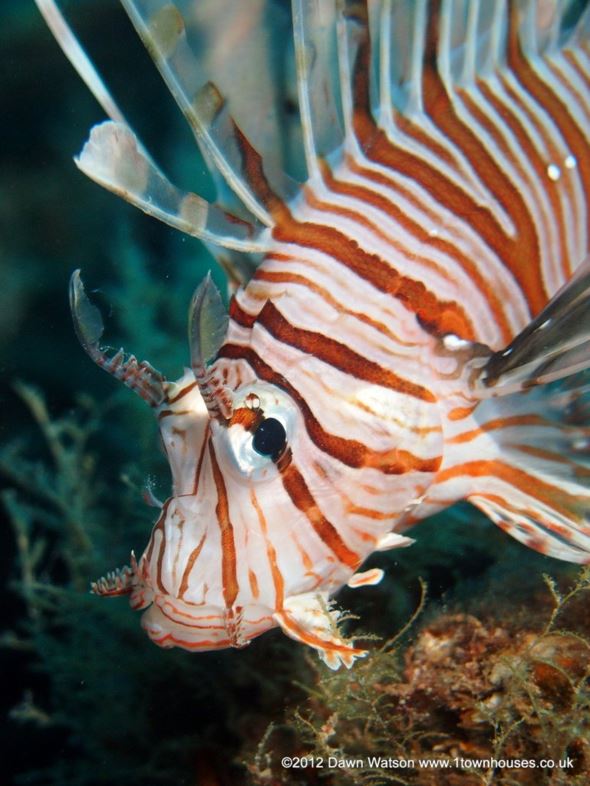 Want more macro? That 67mm thread is the key to breaking out, wet lenses open up a range that approaches SLR parameters. From shooting sea slugs in the face to capturing really big creatures, seascapes and formation divers. A pair of macro and wide lenses (such as the PTMC-01 and  PTWC-01) cost about the same as a good SLR lens and will let you shoot almost anything. Wet macro lenses can reduce the field of view to around 2 inches across while a wide angle can more than recover the standard kit coverage from 55 degrees to 100 degrees. The strobe options are optically coupled and support all the choices you could use. 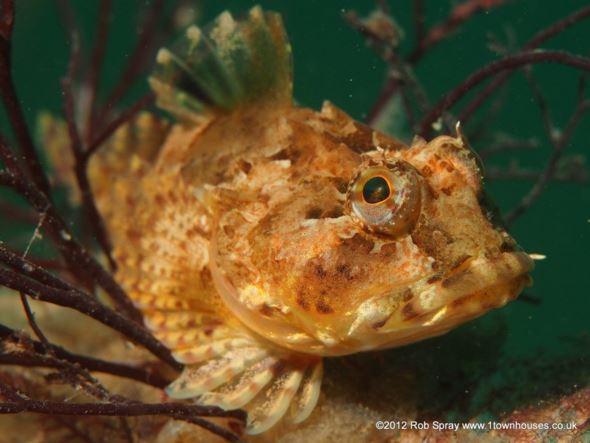 Of course the Holy Grail for any photographer is magazine grade weaponry in whatever sphere they've chosen. Some assume that the small size of the Pen is a handicap against a housed full frame monster but those people are often the ones who are forced to use their phones to take pictures on land. Yes a 20 Megapixel camera could capture more detail (with the right lens) if you had a housing for it... but the difference is still very small. One needs to realise that cameras these days are almost uniformly good and the difference is the photographer, not the finish on the focus ring. If the housed Pen is carried into position it will take you a stunning picture – and it's easy to carry. 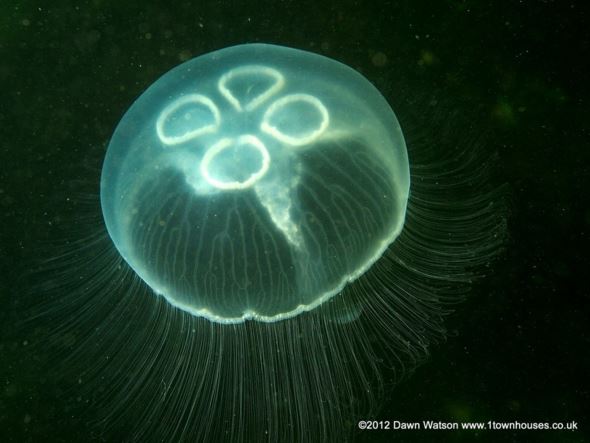 Moon Jellyfish, a tough challenge for any TTL flash – Zeeland

Depending how you configure your system with extras, etc it weighs two to three times as much as a compact but only roughly a third as much as a metal cased SLR. That's not just salvation from the onset of sciatica and baggage charges but enough to let you double up and potentially carry a full reserve or even more logically both wide and macro systems.

Give me a ring

Almost all the bits you need to go straight underwater arrive in the box. You will however need to add a zoom ring, a toothed band for the lens so that you can zoom in and out. As the case is so well tailored for the kit lens it would make a lot of sense to include it! In any case you DO get a very large and effective diffuser which fits right at the end of the port. A less exciting but useful little inclusion is a shading ring, it screws onto the end of the lens and stops light bouncing around inside and reflecting off the labelling around the front element. At the rear you get a sunshade with it and a matching light gasket inside so that it actually works :-) 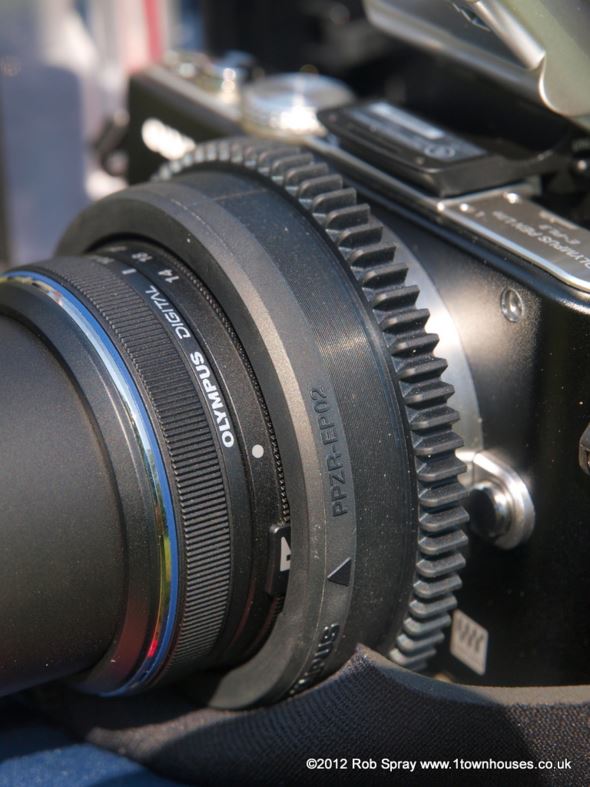 There's no complicated mount plate required to seat the camera, it fits snugly, straight in. Olympus have kept the layout pretty much the same... only the OK button has escaped to the suburbs of the 4 way pad. The case has a high top like a lot of SLR housings but here it's for the flip-up flash. The screen is fixed flat in the case so the main gain over the E-PM1 is the extra controls – size and other features are very similar.

Last year we were lucky enough to be able to dive locally up until the end of November... unheard of for us. The dives were colder and darker than we're used to in East Anglia, drysuit and glove weather! That made for a sterner test, any housing shows well in summer conditions. It's hard to mess up tropical testing, but the British winter is quite different. The colder water (10oC/50oF) means you have to wear gloves (which I normally avoid) and a more bulky thermal suit. The the low sun means less light and much of the wildlife is starting to fade. All of which ensured I'd have to try a bit harder than usual. 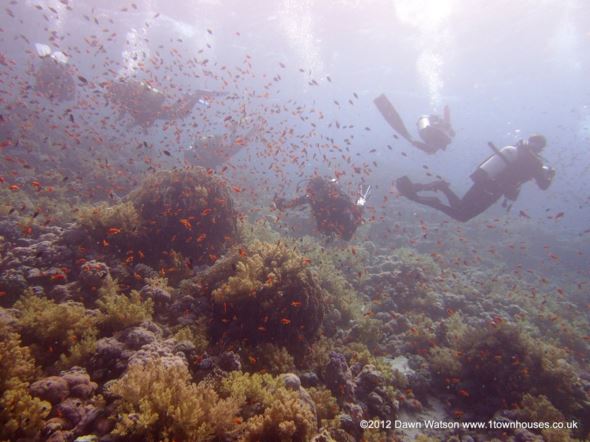 Underwater the case is easy to hold, great for bare or gloved hands - and simple to protect too. Once you add extras its strength means it has no trouble integrating with a twin strobe setup or heavy lenses. There's a row of three tripod screws underneath to spread the load. Compact housings often fracture around the tray mount when you add extras, because the stress is localised. If you're used to housings which have to be spannered tight to stop them rotating that's a thing of the past. Battery life has been excellent, the CIPA rating is modest by comparison with the 400+ shots I got on dives using strobe for 80% of my stills and shooting ample 1080p video too.

Previous Pens were sensitive enough to focus in low light conditions, not just dim sites but also to snap at rapidly receding scenery on murky drift dives – weirdly handy. They weren't as fast as SLRs to focus but they were better than compacts and super accurate – we got lots of good pictures. The series 3 Pens are another kettle of snapper (that's a fish). Focus is very fast, the lack of delay makes any overshoot on the half press decisive. Focus lock is SLR fast and the shutter delay is negligible. The data handling is SLR fast so you can shoot as fast as your strobes can recharge in JPEG+RAW modes. It's part of the SLR side of this little camera. 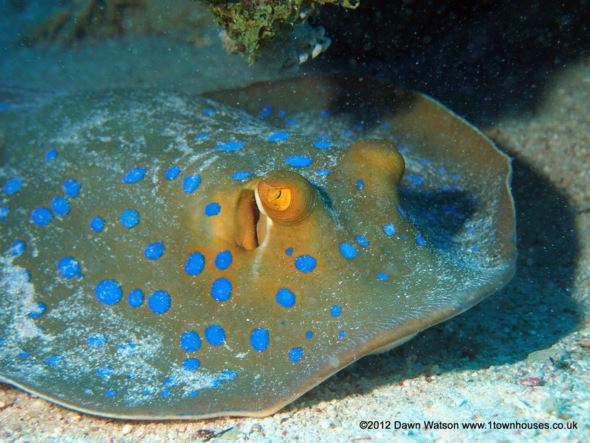 The light weight (1.5kg housed) was really appreciated on the 600m hike to my entry point. I'd selected what I thought would be a typical mild-nerd setup, adding a macro lens and external strobe. That allowed me to make the most of unexpectedly good visibility. In fact I ducked into the shade to make sure I wasn't being misled by the focus speed of the EPL3... I wasn't. The lack of dials (I've not seen a good solution to using those narrow rings around cursor pads through a housing) does mean button pressing for parameter adjustment. I prefer the convenience of an external dial but a couple of key presses are no obstacle and actually more precise.

The Sea is a hostile place for tech toys, you need complete confidence that they'll survive. When I started diving at the end of the '90s the first digital housings appeared fragile, an exercise in hope over expectation. That wasn't the case and in the course of my diving I've got used to ever improving standards of design. Here the already neat Pen housings have been refined to the point where they are hard to fault. Pack them with capable little cameras and you have a package that can take your underwater photography in any direction*. 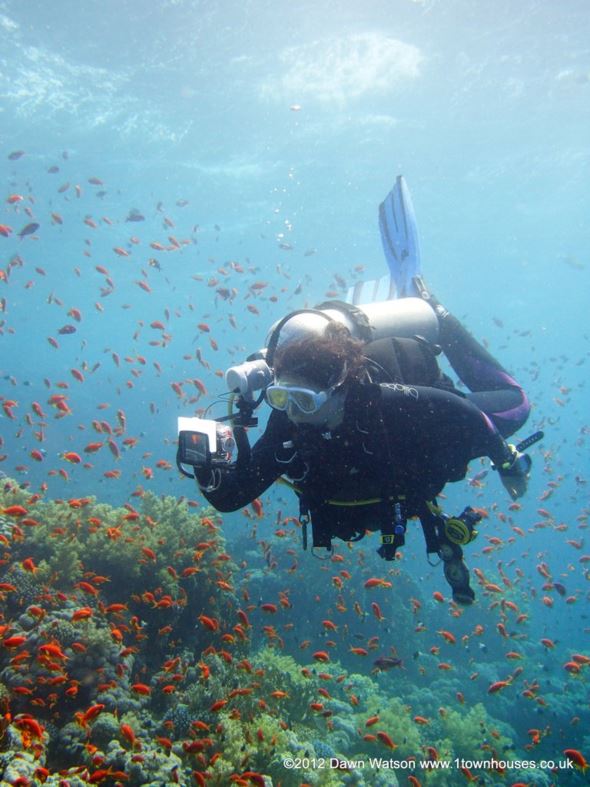 A beginner can pick one up, nerds can configure clever rigs and pros can take amazing shots. From Facebook to National Geographic the oceans are your oyster and the digital age enables to you to share it with all your friends. The underwater Pens are one choice amongst many but sit uniquely comfortably at the crossroads between fun and serious shooting. Their combination of their size, quality and cost effectiveness is compelling.

*Except a long way straight down, please stop at 45m!