In a funny way, the camera wasn't the biggest news in the Olympus E-620 review bundle. The unassuming, though admittedly cobby, Olympus UFL-2 has been something which I and a lot of other nerds have been waiting for. It's nothing more or less than the first completely dedicated digital flash for diving. You can house every land model under the sun but I don't think anyone else has done the job this way - properly.

To understand how interesting this is, you have to know that an awful lot of underwater photography is still conducted essentially manually. The flashes, or strobes as divers like to call them, are simply triggered at a preset power and the camera is adjusted to match. Even TTL, which is de facto on the surface, is often a bit suspect where it is implemented. Features like focal plane shutter lighting are almost unheard of. The very idea of a zoom headed flash is something I haven't heard discussed? A lot of this is because, although cameras have advanced at an alarming pace, much of the underwater flash market is still languishing in filmic nostalgia. 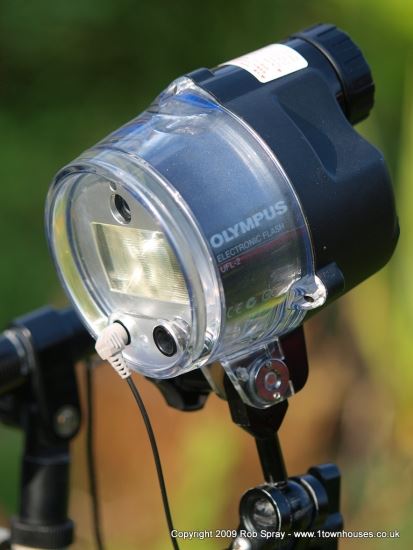 The UFL-2 is a dedicated zoom headed strobe

I haven't seen what the list price of this strobe will be. Unfortunately I know it will be a shock for land photographers. All strobes are expensive compared with their land counterparts. There's a lot of engineering required to make anything waterproof – this unit down to 60m – and even more to manage the heat trapped in a waterproof case. The UFL-2 will take up a mid market position, not the most powerful unit but probably the most flexible strobe on the market. Not cheap but good value considering the features which it packs in.

The Olympus UFL-2 picks up its rich feature set for free because it is, actually, Olympus' FL-36 mid range flash made watertight. The style of case suggests that Olympus supplied the insides and Sea and Sea made the casing. There's no shame in that, Sea and Sea are the biggest makers of diving strobes and are very good at it. It's more of a surprise that they didn't try to cram it into one of their existing housings, but I guess it was the zoom head that dictated the chunky outline. A slight disappointment is that despite the plump body, they didn't find space for more batteries. It takes two AA's but looks as though it would have been trivial to fit four in. More batteries would mean longer between refills and faster recovery.

For an underwater flash the Olympus UFL-2 has rather a lot of controls, all lifted from the FL-36. Apart from the obvious Power button, there's Mode, Zoom and Backlight – for the display. It needs the display because unlike most underwater flashes it can be configured quite extensively, and the backlight is a good idea as the display is inset so that it's tricky to read in less than perfect light. 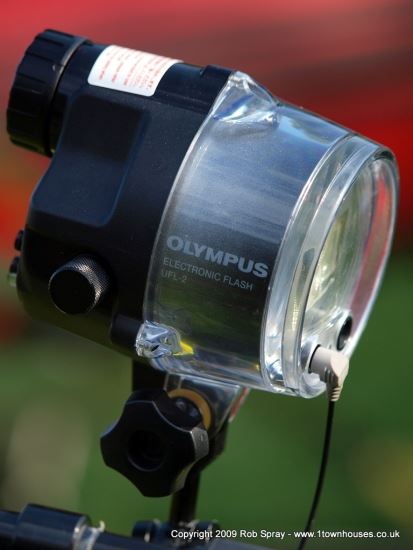 The mode button is the key to setting the strobe, but once set you could leave it forever and not bother it again. The button cycles through its many modes; Manual, Auto, TTL Auto, FP TTL Auto, FP Manual, Slave Auto and Slave Manual. Some are only available when a camera is connected - as there's a dialogue through the hotshoe which tells the camera what the flash is ready to do and the camera tells the flash what zoom position the lens is in. It sounds complicated, but in reality you choose a mode and use it. It's just that unlike a normal strobe, there are more than two choices.

The zoom head is a novel arrival on the underwater market. Strobes traditionally advertise their wide angle coverage, to suit ultra wide angle lenses (and to make aligning them easier). Although the Olympus UFL-2 is comparatively small, the guide number of 36m is apparently much more powerful than some extremely large competing strobes. That figure is when the head is zoomed in; the intensity falls as the beam spreads. At its widest the power drops to a still-competitive 20m, although the coverage is narrower than many mid range strobes claim. The head automatically zooms with the lens and provides matched coverage from 12mm to 42mm – the clip on diffuser spreads the coverage.

On land the FL-36 knows when its slide out diffuser is in use, but as you have to manually fit the one for the UFL-2 it just has to try its best – not a problem, that's what flashes do anyway. Coverage is pretty good, losing out a little to other strobes at wide angle but spilling a lot less light around macro subjects. 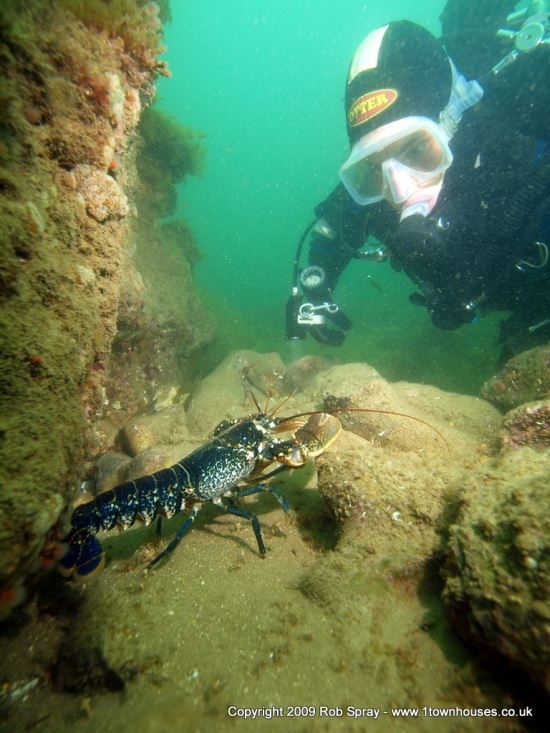 It's a double edged sword. The zoomed beam is much more difficult to aim but much more efficient. Even at 42mm the beam is significantly wider than the macro set up I normally use (70mm), but a strobe is used on long flexible arms and has to be aimed. As it isn't wasting light covering the vast majority of the scene you aren't interested in, the meagre battery reserves are spared. Cycling can be near instantaneous for macro because of this efficiency.

Flash cycling takes a hit if you use the FP modes, which allow the use of shutter speeds up to 1/4000th with most 4/3 cameras (1/8000 with the E-3 or E-30). This mode emits a series of light pulses to cover the sensor as the shutter opening moves and simply can't fire at full power multiple times, so the amount of light is reduced and recovery times are longer. For this I wish they had shoe horned a bigger battery compartment into the case. You might wonder why this feature is valuable, very simply it increases the options for macro with black backgrounds.

The strobe has the standard Olympus 5 pin connector for cabled connection to any housing which has a matching bulkhead connector to carry the hotshoe connection through the case. It's a simple and quite hardy set up which we've used for more than 5 years now. In the very early days others had some issues with ungreased metal bulkhead connectors, but they were soon changed. Now they are all polycarbonate threaded - which can't seize.

This may now be a moot point as the UFL-2 can also be controlled optically. All Olympus SLRs (and their ultra zoom compacts) have offered this system for a while now. The pop up flash on the camera uses data bursts of light to signal its intentions to the strobe and the flash responds with infra red. The pop-up flash doesn't light the scene. I've used this protocol underwater with the FL-36R (in the PFL-02 case) and found that in open water the control range was limited, which is why the UFL-2 and PT-E06 have matching ports for optical fibres. This makes the control connection as reliable as wire – but with no vulnerability to water :-) Very bad news for sales of replacement strobe cables! 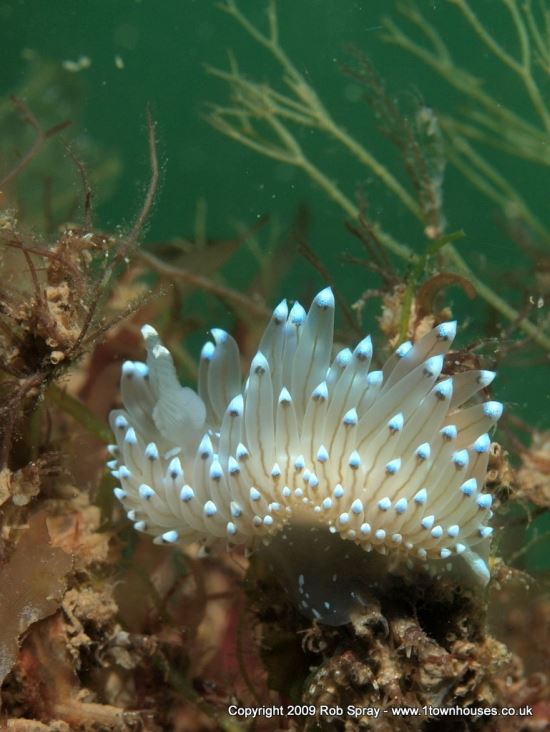 The control of a dedicated strobe helps expose this Janolas nudibranch

Once set to RC Slave, the system works as though it's wired, except all flash control is brought onto the back of the camera. It's pretty cool, you don't have to peer into the strobe's display to find out what's going on. From the camera back panel you can select any of the modes and control 3 channels of apparently unlimited flashes. In real life I guess two is practical, but it does open up the option of some very complicated multiple flash lighting.

The Olympus UFL-2 can of course also trigger third party strobes, either in manual or auto slave modes. You can't use the second port on the case for this in RC mode as the control pulses would falsely trigger the strobes, but the UL-2 has a second port which can daisy chain the main flash to trigger another.

There's a small price to pay in that the camera uses its own flash to control the strobe, reducing battery life, but the data bursts don't have to be very powerful so the impact is slight.

As I've used a housed FL-36 for a couple of years I knew exactly how the UFL-2 would behave. It's not the most powerful strobe in the world but it has superb finesse - wired or fibre connected. Control on macro subjects is excellent, if you wanted to you could correctly expose subjects actually resting on the strobe itself. For wide angle shooting, the control options the RC wireless mode offers are potentially mind numbing, but it actually really simplifies the addition and use of multiple extra strobes. 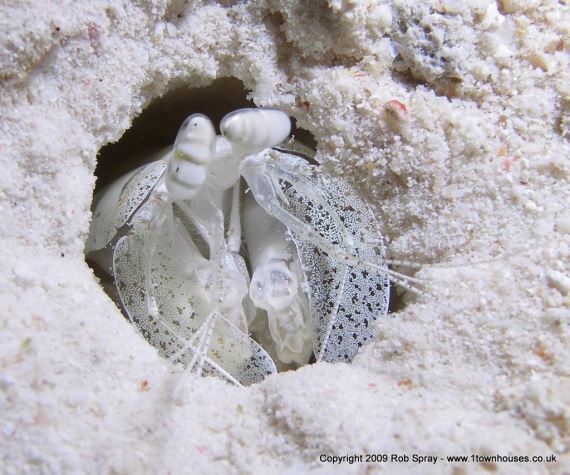 Housing the FL-36 properly has made it very pleasant to use - a land flash with the form factor of a typical underwater strobe. Almost nothing is lost from the FL-36 and now it is easier to aim and much, much lighter. Even though they have certainly not rushed to market, Olympus have beaten the bigger players to offering a truly complete underwater SLR system by miles.

One of the unexpected bonuses of the wireless remote mode is that this strobe can do duty on land too, if you need to add another flash to your set up, or want to play in the rain. Most TTL strobes are confined to underwater use by their specialist connectors.

Only 2 AA batteries, limited reserves and recycle slows as batteries deplete. Wired connector could be positioned better. Not cheap.

The Olympus UFL-2 is now the best strobe for Olympus macro divers.