Matt Golowczynski got to spend some time with a pre-production sample of the full-frame Pentax K-1 – here’s what he made of it. 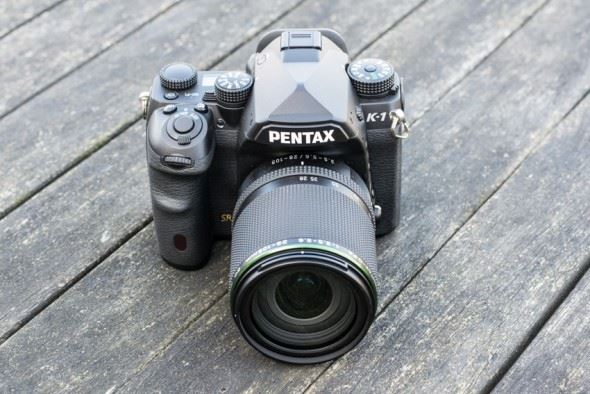 Long-rumoured, heavily debated and often-teased over the last year, the Pentax full-frame DSLR that many have been waiting for has finally arrived.

Up until this point, thanks to prototypes on display at various events and carefully concealed body shots released by the company, we’ve had a general idea of what the body would look like – but only now do we get any idea of what’s happening on the inside. Click here to watch our video.

To some extent, much of what the K-1 offers is not particularly surprising. This isn’t to say that it’s uninteresting, just that Pentax has placed a lot of focus on its enthusiast-level DSLRs in recent years, and this means much of what has naturally filtered into the K-1 is stuff we’ve seen before. Yet, in a handful of other areas the camera offers a number of surprises.

Ricoh Imaging was good enough to lend us a sample of the K-1, together with new D-FA 28-105mm f/3.5-5.6 ED DC WR lens and D-BG6 battery grip. As is typically the case at this stage, the model was a pre-production sample rather than a full retail version, and so we cannot publish any images captured with it, nor draw any definite conclusions as to the performance of the models that will eventually be available for sale. Still, we can get a good idea of what theK-1 will offer.

The K-1 is not too dissimilar in size from the current APS-C flagship, the K3-II, being 5mm taller, 7.5mm wider and 8mm deeper (this increase is said to be partly down to the incorporation of the five-axis, five-stop image-stabilisation system). The K-1 is, however, 225g heavier than that model, and this weight-to-size ratio, together with its abundance of physical controls, makes it obvious that the K-1 is a serious camera as soon as you pick it up.

Although the camera follows much of the K3-II’s design, that camera’s large top-plate LCD has been shrunk here to make way for two extra dials, as well as an AF lamp and a collar to switch between stills and video capture. One of these dials provides quick access to settings such as ISO, burst shooting, the new Crop mode and exposure compensation, while the other is used to adjust these settings once selected. The former dial stands proud from the top plate and is easy to turn, while the latter dial is flatter and noticeably stiffer; given its position at the very corner of the top plate, this is no doubt an intentional step to prevent it from being turned accidentally. 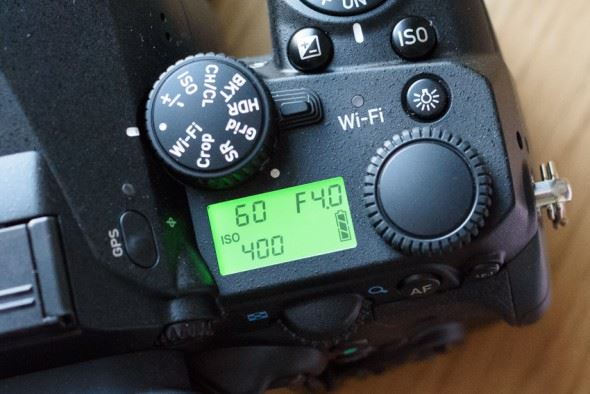 The top plate LCD and dials

In practice, this setup works very well. It’s a convenient way of being able to adjust a number of parameters quickly, such as if you temporarily need to disable Shake Reduction or bump up the ISO, although there doesn’t appear to be any way to customise the options on this dial.

Although the top-plate LCD is considerably smaller than most others, it still contains all core exposure and shooting information –aperture, shutter speed, ISO, battery level and, when selected, exposure compensation – together with the card slot currently being used. This is all illuminated by a powerful green light that’s activated upon a press of the nearby button.

The mode dial contains the standard Auto and PASM exposure options, together with the Sensitivity Priority (Sv), Shutter and Aperture Priority (TAv) and Flash Sync options, as well as a Bulb option and five User settings. Usefully, underneath this dial is collar that locks the dial in position, which should prevent it being turned accidentally. This is a little difficult to grasp, although were it any more pronounced it may well be susceptible to the very thing it’s trying to prevent from happening. 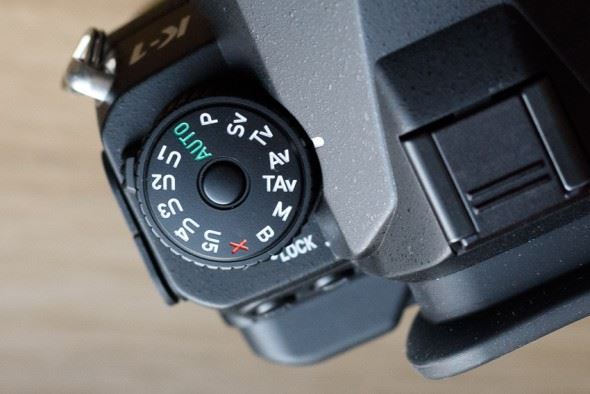 The design of the rear also follows that of the K3-II, with the only significant change being the relocation of the photo/video dial to the top plate. What’s good to see is that commonly used controls, such as menu and playback, have all been placed on the right-hand-side of the screen where they can all be accessed with the thumb of the right hand, leaving the live view and metering pattern controls to the left-hand corner, and the option to delete images twinned with the latter control. 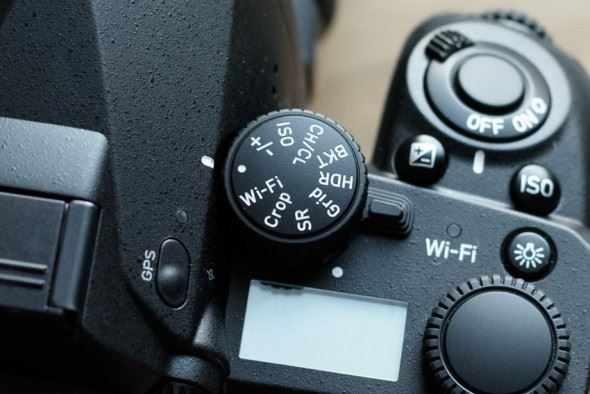 The settings dial is a useful way to make quick adjustments

One of my first impressions of the K-1 was just how well the body fit into my hands; the grip is rubberised and sculpted with a clear indentation for the middle finger, while the thumb rest on the rear has a humped edge to ensure the thumb stays in place to support the camera. The front command dial is easily reached by the forefinger without having to reposition the hand, and is both tactile and easy to rotate – something that also applies to the rear command dial – although there appears to be a slight delay between its turning and changes to be registered on the LCD screen. Hopefully, this will be ironed out in production samples of the model. 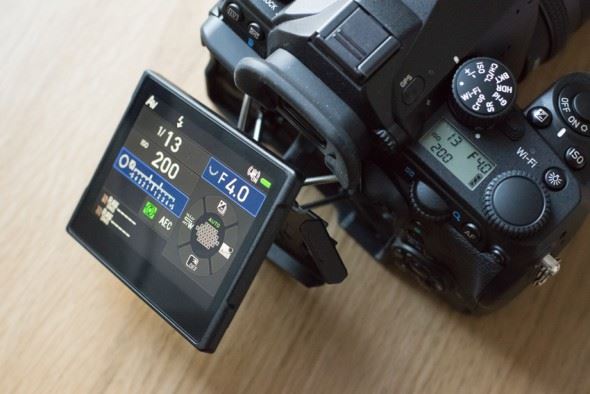 The most impressive aspect of the camera’s physical design is the LCD screen, chiefly because no other camera sports a design like it. At first it simply appears to offer the same tilt-me-up-tilt-me-down design as many other models, but the metal bracket which backs it is mounted to the camera by four arms, which all move independently from one another. This allows the display to be (slightly) rotated relative to the camera and adjusted to a wide range of positions; at its most extreme setting, it can appear as though it’s mounted to the camera by one of its corners.

Pressing the top-plate lamp button also activates the three other sets of lights around the body, four at the back of the LCD, one inside the card slot and one under the overhang above the lens mount, and these are designed to assist the user in low light. The lights on the back of the display are a nice touch; they do the job well, and while some may have preferred them to be brighter or to have a wider spread, it’s perhaps just as well that they don’t as this would have the potential to affect metering readings if some of this light were to enter the viewfinder. As with the top-plate LCD, you can adjust their illumination to one of two levels, or turn them off.

The display’s 1037k-dot resolution may on paper be beaten by the displays of other recent models, but nevertheless it appears clear, bright and high in contrast. Should you want to adjust its brightness, such as when shooting outdoors, you can do this very quickly through the Outdoor View setting that’s assigned to the bottom button of the menu pad. You can also change this so that it accesses one of five other settings, and it’s possible to further customise other buttons around the body. While the choice of options here is not as plentiful as on some other models, the wide range of physical controls on offer, together with the Info button that provides access to up to 20 options, may mean you won’t feel a great need to change much from the default setup. 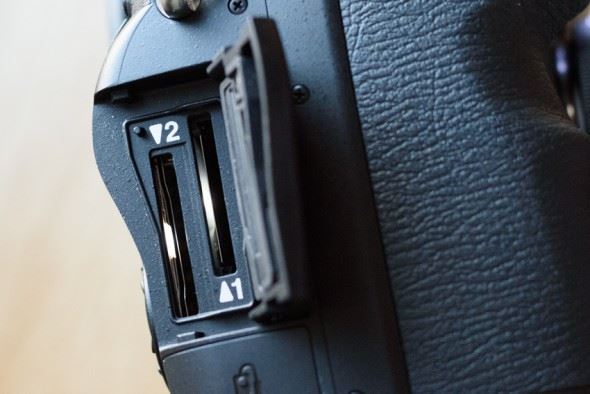 The dual card slots are a handy feature

With live view activated, the camera displays key exposure information around the periphery, with one corner devoted to horizontal and vertical levels. These make good use of colour to indicate whether a shot is level and are perhaps most useful for landscape work and during handheld video recording. A more basic version illuminated in red is inside the viewfinder, although both can be disabled should you not require them. On the sample we received, the viewfinder was a touch darker than expected and bore a slight yellow tint – again, this may well be cleared up in full production samples.

Compared with the AF systems on some other cameras, the configuration of points shaves off a little vertical coverage and instead stretches a little towards the sides to form a more letterbox-shaped pattern (potentially useful when capturing subjects moving horizontally). The points aren’t quite as defined or as brightly illuminated as those on other models, but the system appears to respond well when moving between different subjects, with the Auto pattern doing a good job to identify key elements in the scene.

The battery grip compatible with the model appears to be constructed to just as high a standard as the camera, with its twin dials rotating just as easily as those on the body and the expected assortment of controls such as exposure compensation, ISO and an AF button easily falling to the finger and thumb. It sits comfortably in the hand too, although those with larger hands may find their fingers running into the large wheel used to attach and remove it. 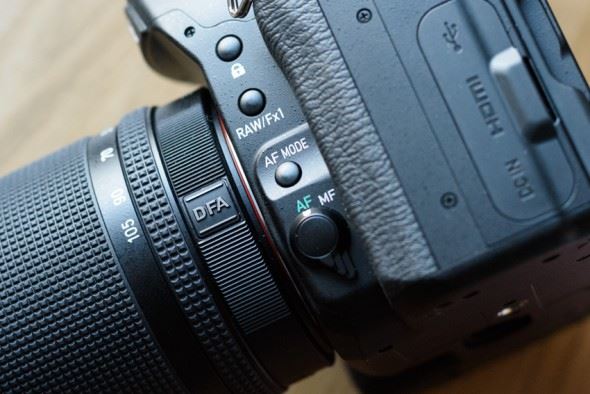 The AF button is placed near at hand

On paper, the K-1 continues the long-held Pentax tradition of delivering an excellent and well-rounded feature set at a reasonable price – very reasonable when you consider the asking prices of similar models at launch. Not satisfied with just offering a solid set of core specs with useful extras, the K-1 goes on to offer further options to satisfy more niche subjects and styles of shooting. It’s difficult to think of anything it really lacks, and the option to use it with lenses designed for cropped-sensor models  – albeit at a lower effective resolution – will no doubt please many Pentax users who now finally have the full-frame upgrade they’ve been waiting for.

It feels robust, and although much is familiar from previous models, it’s great to find a handful of changes that make it more convenient to operate. There’s a button or some other control in virtually every location in which you could sensibly place one, and once you familiarize yourself with where everything is and how controls work in combination with one another, you’ll find your way around it without delay. Furthermore, unique way in which the screen can be adjusted makes it potentially very useful for any kind of tripod-based work, particularly macro photography.

It will certainly be interesting to see how well full production samples perform against other full-frame models.

Pentax K-1: What You Need to Know