At Wex Photographic, we’re always on the lookout for new equipment and believe me we see a lot of stuff, some of it good, some of it bad and some of it downright ugly. A lot of this new kit, especially studio lighting comes in from the far east, especially China. We see a real mix of products, some direct copies of well known European brands plus a wide range of weird and wonderful designs and as I said before, some good, some bad and some ugly.

The bottom line is that China is very good at manufacturing things, we know this because most of the major brands now have factories there. So its no surprise that we’re beginning to see a steady trickle of equipment trying to find its way into Europe. However our job is to make sure that we only give you the good, not the bad, and definitely not the ugly!

With that in mind, we’ve recently looked at a new lighting kit which we think is a real winner from Photo Basics, imported by the well known American lighting company Westcott, and they have a reputation to protect. I’ve had the new Strobelite kit on test for a few days and I have to say I was quite impressed.

Over the years I’ve seen an awful lot of lighting kits from the far east and I do mean awful! The thing that can let them down straight away is the design and more especially the build quality. The one thing you don’t want is nuts, bolts or screw, sticking out of body panels, bearing in mind that you’ll be handling them in the dark and you don’t want any sharp edges, or bits that stick out and bite you!

I don’t know why, but I was expecting the worst when I opened the kit bag for the first time. But, I’m pleased to say that the Photo Basics kit has no such problems and the Strobelite heads are very well finished with a matt black, almost rubberised coating. They are much better than I expected, well made and smooth to the touch. 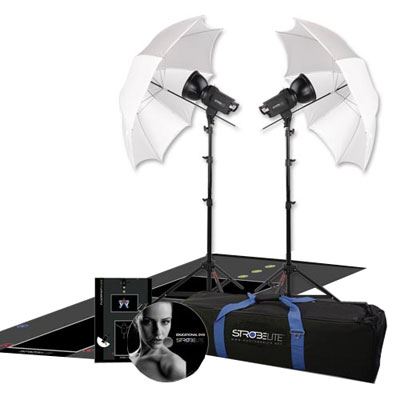 The next thing to consider is the overall design, and again the Strobelite looks good with its smooth finish and one piece moulded design that incorporates a large grip handle and moulded air vents behind the tube. I think the heads look very smart in that matt black finish and I also liked the way that the brolly clamp is very neatly built in to the chunky stand bracket. I say chunky, because you know it's not going to break, certainly a weak link I’ve seen on other heads before!

So all good news for the look and design, but what about the spec of the Strobelites?

Pitched at 300j ( a guide number of 39 ) its a very solid mid range power, ideal for the starter who wants to dip his or her toe into the waters of studio lighting for the first time. As its full name suggest the Photo Basics Strobelite 2–Light Educational Kit is designed for beginners and to help them get started it comes with an educational DVD full of helpful hints and a floor positioning mat that helps you place the lights on the studio floor.

Looking at the heads in more detail, the Strobelite’s have the standard ‘S’ type accessory fitting, operated by a chrome locking knob. A sensible decision, as its used by other manufactures and means you can choose a wide range of quality accessories made by WexPro or Bowens for instance. This is an important consideration when choosing flash, knowing that you’ll be able to add value to a basic kit by buying high quality accessories later.

Still at the front end, the Strobelites are fitted with daylight balanced, user replaceable tubes. That’s another big plus point as they won’t need to be sent away for repair. They use standard push in two pin jobs, secured by a small spring. The tubes are rated at 5600K +/- 100K, another sign of a quality head and the flash durations are quoted between 1/1000 to 1/1300th of a second. These figures are really important because some flash kits I’ve tested come with no ratings or measurements at all for these really key components. The modelling lamp used is a standard 100w E27 version that simply screws into the front of the head.

At the back end of the Strobelite, the controls are pretty well laid out and easy to understand. The only niggle I found was that the power knob is a bit too close to the grip handle, so smaller fingers are better than big one’s when it comes to turning it.  That power knob is variable, and can be turned from min to max, that’s ¼ to full power on the dial. Under that knob are two black switches, one for flash, (also the mains On/Off switch) and one for the modelling lamp. This is a two position switch for maximum lamp, or for proportional lamp, that gets brighter when the powers increased. Ideally, I would have swapped the knob and switches, positioning the knob lower down on the panel, allowing a bit more space to rotate it.

There are also two small, clear domes, one for the ready light to tell you its charged and a receiver for the built in slave cell. There’s a nice red test button and a mini sync and mains lead socket with a fuse holder and that’s about it.

The recycling times, as you would expect from small heads like these are only 2 seconds back to full charge and each head has its own built in slave cell for triggering. That means that you only need to trigger one head with a sync lead from the camera and when that head flashes, the slave cells in any other head will trigger automatically. The trigger voltage quoted for the heads are a standard 5 volt, making them safe to operate with any DSLR.

The Strobelites don’t have ‘auto dump’, meaning that when the power is turned down, the excess power is automatically ‘dumped’ within the head, allowing the correct power to be delivered. This is no problem as long as you remember to press the red flash button every time you reduce power. This will fire off the higher power and allow the head to recharge to a lower power that will deliver the correct setting. If it sounds a bit complicated, please don’t worry about it, you’ll soon get the hang of using the head and firing that red button to get the right power.

The accessories that come with the kit are basic as you would expect, and you get a pair of brollies, wide angle reflectors and stands. Also included in this kit are two free soft boxes, and that can’t be bad! This combination of basic accessories is not unusual in kits aimed at beginners, but as I said before, the ‘S’ accessory fitting does give you options for the future.

The 105cm brollies are white translucent and can be bounced or used shoot through. At 105cm, I did think they were quite big, almost too big for the heads. The wide angle reflectors are a standard 18cm diameter and would be useful to shoot larger groups. The black stands are air cushioned, a nice touch and have two extensions that will get each head up to about six feet high.  The two free soft boxes are certainly a bonus and at 60 x 80cm they will be ideal to shoot products or to light backgrounds. They’re nicely made with good quality material and have inner and outer diffusers and air vents to keep everything cool. They attach to the Strobelites via the dreaded metal adaptor and long bendy rods, easy to put up, not so easy to take down!

The two head kit comes in a large, black, zip-up case that holds everything easily with room to spare for a meter and other bits and pieces. And the kit isn’t that heavy either, I haven’t got an exact weight for it, but it weighs less than other kits I’ve carried, another bonus for people with bad backs.

As for performance, the Strobelites worked well when I tested them with a Sekonic meter. I took some readings using the wide angle reflector, shooting with the white brolly direct and then bounced. The power output was very consistent as I took a series of readings throughout the day, always a good test. Everything was metered from 3 metres from the flash tube to subject and the Sekonic meter was set at 100 ISO, 125th of a second.

These are the results using the wide angle reflector and the white brolly direct:

These are the results using the wide angle reflector and the white brolly, bounced:

As you would expect the figures for the bounced brolly are a little poor, due mainly to the light loss. I think this is for two reasons, first its large size (105cm doesn’t help) and second its always better to have a brolly with a black or silver rear cover to stop that light loss. But you can see a big improvement by shooting through the brolly, direct onto the subject, again using the wide angle reflector. Shooting this way gives you the best performance and ensures that you always get nice round catch lights in the eyes. I would say that the figures I obtained are very reasonable for a 300j head.

To sum up, the Strobelites are definitely aimed at the beginner and the DVD and floor mat will be a real help to anyone buying for the first time. The heads really do have a nice feel, because of that matt black finish, and you won’t be disappointed with the build quality. I did find the power knob a bit fiddly and it’s a shame its just a bit too close to the grip handle.

Though basic, the accessories are well made and will provide a good starting point for anyone wanting to shoot people or products, especially with those free soft boxes! Other features I liked were the air cushioned stands and the user replaceable flash tubes. I also liked the fact that the flash tubes were rated properly, something you might not expect from a kit in this price range.

In fact, apart from that moan about the power knob, (I do have big fingers) its hard to find anything wrong with this kit at all. I did say that the brollies were a bit big for the kit, but that’s hardly a deal breaker is it? And finally the price, only £399.00 (at the time of writing this review), I would say that any kit of this quality that sells for a shade under £400.00 is a real snip.

If you do decide to buy this kit for portraiture, look at the WexPro Softlite range of reflectors. The WexPro 55cm Softlite will give you perfect head & shoulder and three quarter portraits every time, just use it front on to the subject!