The Pixelstick looks set to expand the possibilities of light painting, making it even easier to be creative. Tim Coleman takes a closer look in his Pixelstick review. 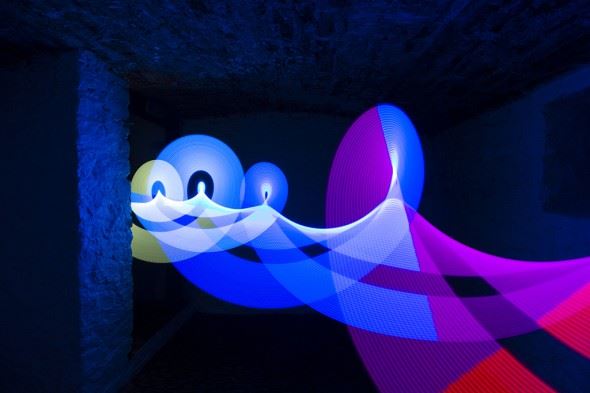 Made possible through the funding platform Kickstarter back in October 2013, the Pixelstick appears to be a dream come true for any aspiring light-painting photographer without the technical wizardry to create a complicated light-painting tool for themselves.

What is the Pixelstick? 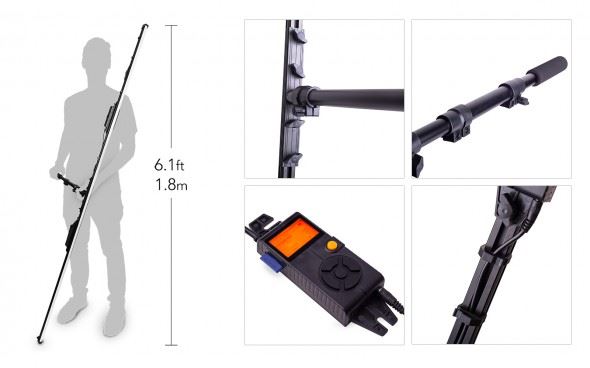 The Pixelstick is a linear digital light panel packed with 200 full-colour (RGB) LEDs. Each LED is able to produce any colour and flash on and off at particular speeds and colour sequences. These programmable LEDs allow the Pixelstick to paint colourful patterns and photoreal images, which are in turn captured with a camera through a long exposure. The LED panel is mounted to a handle with an additional spin sleeve, designed for fluid ‘painting’ movements. Any bitmap (BMP) picture can be added to the Pixelstick on an SD memory card through the device’s controller.

Importing pictures and patterns to the Pixelstick

Although the Pixelstick can be used to program custom light patterns, there are a few demo patterns preloaded on the controller, including the rainbow pattern seen in most of the product’s promotion material. Numerous correctly formatted pictures and colour patterns can also be downloaded free of charge from the product’s website, including famous artworks and movie scenes. It is, however, straightforward to load your own pictures too.

To format your own picture, firstly it should be flipped 90° counterclockwise. Pictures are displayed through the 200 LED lights one vertical line at a time, with each light corresponding to a single pixel. Therefore, to prepare and maximise images for use with the Pixelstick, the width dimension of the flipped picture must be 200 pixels, whatever the aspect ratio of the picture. A portrait-orientation image might typically be 100×200 pixels and a panoramic image around 1200×200 pixels. Once sized correctly, the picture must be saved in bitmap (BMP) format onto the SD memory card that’s placed into the Pixelstick controller.

Successful images taken using the Pixelstick rely largely on the appropriate choice of painted pattern or picture in relation to the surroundings. It’s worth spending plenty of time thinking about a good place to shoot and then what images, colours or patterns would suit these surroundings. There are many example images online to inspire you before you get started, and it’s worth checking these out before creating your own patterns.

A long exposure is needed to capture the light patterns painted using the Pixelstick. For sharp pictures, the camera should be mounted on a sturdy tripod and triggered either using a self-timer option or, ideally, a wireless remote. The latter is especially handy if you’re responsible for both the light painting and picture taking. Having a helping hand is not essential but it does make light-painting photography much easier (and means you’re likely to achieve that great result in less time).

The user should take manual control over the camera’s exposure, setting a shutter speed that is long enough to capture the movements of the Pixelstick. Of course, the settings depend on the ambient light and the length of time needed to paint with the Pixelstick. In an urban setting with dim street lighting, an 8sec exposure at f/16 and ISO 100 is a good starting point.

Ultimately, if the light pattern is too bright or dark, adjusting either ISO or aperture appropriately will help you to get the correct exposure. Extending the shutter speed results in ambient light becoming brighter, not the light patterns created using the Pixelstick.

There are several parts that make up the Pixelstick, as highlighted in the What’s in the box? section. Two 100 RGB LED panels are slotted together to form a 1.8m light wand, and a diffuser panel is included that slots over the LEDs.

The panel fits onto a handle that has a foam grip and a rotating sleeve can be added to it. This allows the user to easily spin the LED panel to create circular motion patterns.

Eight AA batteries fit into a holder on the arm and, on a full charge, are claimed to provide power for multiple nights shooting. A cold shoe bracket is also found on the arm for the purpose of attaching a wireless remote, although a remote is not included with the Pixelstick as standard. 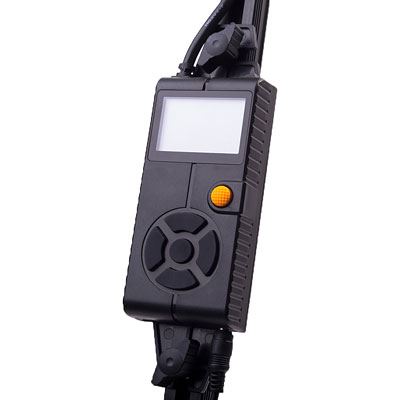 Where the Pixelstick comes up trumps as a light-painting tool is its controller and interface. Via the controller’s LCD screen, one can make several adjustments on top of selecting the image itself, including LED brightness, orientation and timing settings. Furthermore, an image can be repeated several times, while the Increment setting allows different images to be displayed one after the other – a truly brilliant feature. 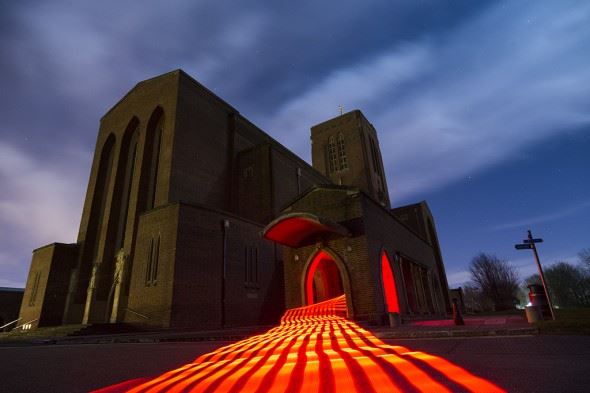 The Pixelstick’s ease of use may be lost on those new to light-painting photography, but experienced shooters will surely appreciate not only how quick it is to assemble, but also the interface which allows for quick selection of images and the option to repeat or vary images. Using the Increment option, it’s possible to put a number of images in a folder and activate them manually in that sequence.

At 1.8m in length when constructed, the Pixelstick displays a fairly large image. As the LED panels come in two parts, it’s possible to use just one of the two halves, which I found particularly handy when working in confined spaces. To use just one half, the battery pack needs to be relocated on the panel with the controller. Loosening the battery pack requires an Allen key; including one in the box would have been handy although it’s a very common size (I found one in my man draw).

In practice, fluid movements of the full-length Pixelstick take time to master, so you should be prepared for several attempts at the same picture. It is, for example, easy to catch the Pixelstick on your leg while walking with the device, given its large size. Actually, you’ll probably want many attempts at the same picture anyway because of how fun it is, even with just one or two different patterns.

At approximately 3kg the Pixelstick may not weigh much in itself, but it’s heavy enough to be uncomfortable to hold with a single hand. I’m not sure if it’s the handle design, but I found myself bracing the Pixelstick with my other hand on most occasions (although this can help in achieving fluid movements). 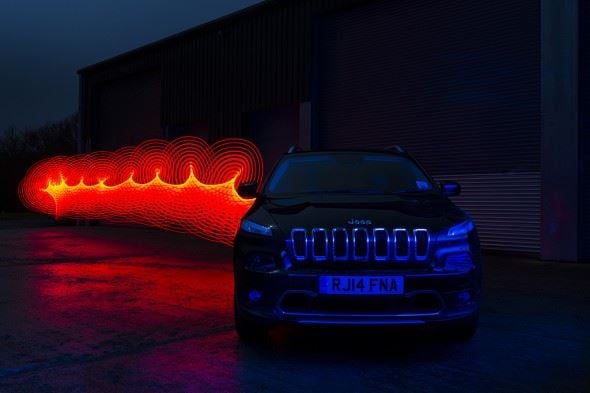 Although it’s designed to paint light patterns, any light source like the Pixelstick can be used to illuminate subjects too. For example, in the picture above I have walked 360° around the car to illuminate the front as well as paint patterns behind it.

When illuminating subjects, there is light spill from the Pixelstick unless it’s facing the complete opposite direction to the camera (see the top left in the image below). To minimise any light spill, I would love to add a ‘hood’ around the edges of the Pixelstick. Most users won’t be affected by this as the Pixelstick is marketed for light painting rather than illumination, but I usually incorporate illumination into my light-painting pictures.

The unit’s handle slots into a bracket on the Pixelstick. Unfortunately, towards the end of this test, the bracket came loose and the Pixelstick fell off, which meant that I could not trust holding the Pixelstick by the handle alone. This was a real shame, although I’ve been informed by the creators at Bitbanger that the test sample I have used is an old version and the handle has since been redesigned (I’ve not seen the redesign so I can’t comment on this). 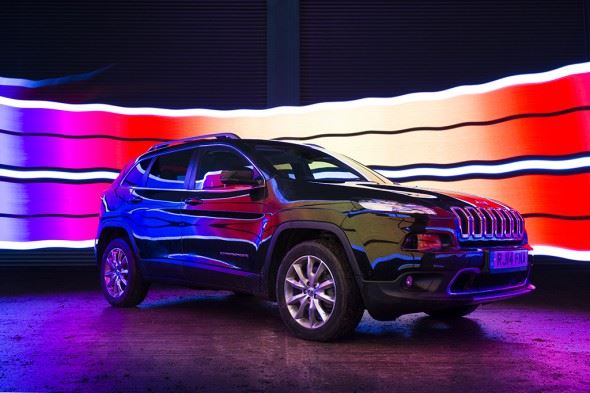 As for creating timelapse sequences, the process is pleasantly straightforward. Adjusting the start and end point incrementally in each picture – by a few inches at a time – creates a relatively smooth movement.

I imagine with further development, a future Pixelstick could feature a more densely packed LED panel for high-resolution images, but there are always drawbacks to such developments (such as device, for example, would no doubt be more power hungry). As things stand, I had three busy nights with the Pixelstick before the standard AA batteries ran out of power. When the batteries are low the brightness of the LEDs fades; for such a sophisticated device, I had hoped the output would be consistent until the battery life was zero.

For its useable interface and functionality, the Pixelstick is a triumph. Crucially, the display is sufficiently bright and painting using patterns is a delight. The 200 LEDs are each spaced apart by approximately 5mm, so when it comes to solid patterns and pictures each LED is discernible. At 200 pixels over 1.8m, the painted image is hardly high resolution – that said, there is nothing else available on the market with the functionality of the Pixelstick, so it’s hardly a criticism.

The Pixelstick is hardly cheap, but based on what can be accomplished – and the fact there is nothing else like it available on the mass market – it’s totally worth it. A single job could more than pay for the Pixelstick. A couple of handling issues aside (on my test sample), I’ve loved the experience. There’s so much to try out with Pixelstick and, if you’re like me, you’ll get excited at the possibilities. For some, it’s entirely likely to be the start of a long-lasting relationship with light-painting photography.

After achieving a first-class BA in Photography at the University of Creative Arts, Rochester, Tim has worked primarily as a wedding photographer and cameraman, but enjoys every kind of photography. Since May 2010, he has worked for Amateur Photographer magazine as the Deputy Technical Editor, writing everything from camera reviews to advice on good photographic practices. Currently, he is freelancing in the photo industry. You can view more of his work here.

How to photograph fireworks

How to paint with light