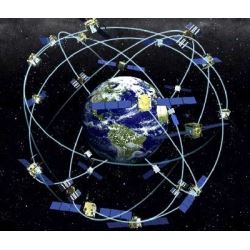 Not long ago satellite technology was the reserve of the military and cloaked in secrecy; more James Bond than Joe Public.  But with the advances of the internet came sites like Google Earth and Multi Map and soon anybody with an internet connection could view satellite pictures of almost anywhere on earth.

Today things have progressed even further.  Drive along any motorway at night and nearly every car will be internally illuminated by a rectangular glow coming from a dashboard mounted satellite navigation system.  GPS (Global Positioning System) no longer belongs to the world of international espionage and black ops, but is a huge commercial entity that has found its way into almost everybody’s lives.

Hand held GPS devices have been used by outdoor enthusiasts since they became available to aid navigation in the wilderness and no doubt some of them have been using the data provided to log their photographs as well.  How many of us have taken a trip somewhere, taken loads of pictures and then, when reviewing them back home, struggled to remember where some of them were taken?  The demand for simple, straightforward ways to add location data to photographs has grown and there are now several options on the market.

Many of these are geared up for SLR cameras and require a hot-shoe or other physical connection to log the images as they’re taken.  The Sony GPS-CS3 device is different.  It is a completely separate entity that doesn’t need to be tethered to the camera and is therefore, on paper at least, suitable for use with any type of camera.  I was loaned one by Sony for a weekend jaunt to the Lake District to see how it worked out on a climb of Blencathra. 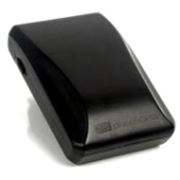 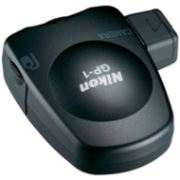 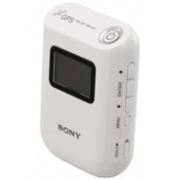 Having never used anything like the Sony GPS-CS3, I made sure to read the instructions to find out exactly how this little device worked.  And little it is.  At just 8cm long, 5.5cm wide and 2cm deep the GPS-CS3 is extremely compact.  It is supplied with a protective case with a belt loop and clip so it can be hung on your waist or attached to a ruksack, and the case also offers additional weatherproofing. 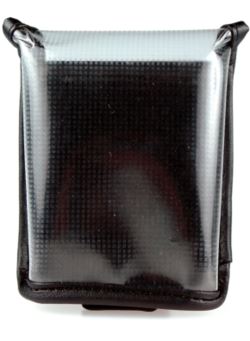 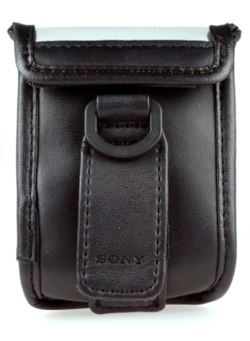 As for the instructions, they are somewhat frugal, providing the bare minimum of information.  However, after re-reading the pages several times to ensure I hadn’t missed anything it became clear that the operation of the Sony GPS-CS3 is as simple as its design.

The Sony GPS-CS3 is powered by a single AA battery which offers 15 hours of GPS logging and the unit is turned on with a simple on/off button at the top of the unit.  The top panel of the Sony GPS-CS3 is also where the antenna for satellite communication is housed.  Once turned on the unit will start searching for satellites in order to calculate its position.  This requires being outside with a reasonably clear line of sight between you and the sky.

Once the links have been made, the display changes to show your GPS position and the current strength of the satellite signal.  There are 3 main displays which can be cycled through using the up and down arrow keys on the side of the Sony GPS-CS3. These show your general position, a more detailed GPS reference, and the time and date respectively.

First time out you will need to set the date, time and time zone.  This is done through the Tools option in the menu which is accessed via another button on the side of the Sony GS-CS3.  In fact, all the controls (with the exception of the on/off button) are located down the side of the unit and are all (including the on/off button) still operational when the GPS-CS3 is enclosed in its case.

With the operational essentials of the Sony GPS-CS3 mastered, the instructions were put to one side.  There was still much to be learned regarding the supplied software and applying geo-data to the images, but I decided to cross that bridge when I came to it on my return from Cumbria.

In the field (and on the hills)

On the day of our climb I had the Sony GPS-CS3 in its case attached to the waist-belt of my rucksack where its communication with the satellites would not be interrupted.  It is possible for the device to function even when in a pocket or tucked in the top of a bag, but keeping it exposed gives the Sony the best chance of maintaining a strong signal.  With the time and date already set, all I had to do that morning was turn the unit on, wait for it to find the satellites (a couple of minutes), and keep it turned on to log the GPS data throughout the day.

The Sony GPS-CS3 can hold up to 3 months worth of logged GPS data, assuming the unit is used for 12 hours each day.  However, the AA battery that the Sony takes will only power it for 15 hours.  Although the walk up and down Blencathra should take far less than that, I had packed a couple of spare AAs just in case. 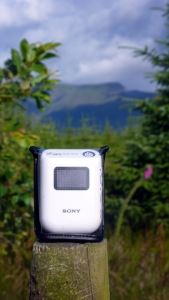 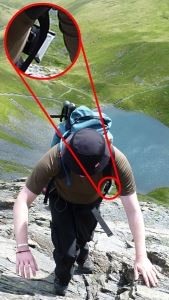 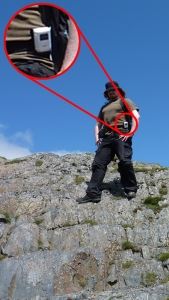 There is another essential step to make logging the GPS data of your images with the Sony GPS-CS3 as straightforward as possible.  Because the GPS unit and your camera are not physically connected, the Sony relies on comparing data from your images with the data it’s recording in order to match them correctly, namely the time and date.  As such it is important to ensure that the time and date are set correctly on your camera.  Although they don’t have to be perfectly synchronised, it’s helpful to make sure that your camera and the Sony GPS-CS3 are showing more or less the same time.  Within a couple of minutes should be fine, depending how fast you are moving and therefore how far apart your photographs are.

As for the walk itself, we went up Blencathra one way and we came down Blencathra another way and the Sony GPS-CS3 accompanied us the whole way.

In terms of operating the GPS-CS3, the climb itself was something of a non-event.  Once turned on it just hung on my belt logging GPS data until it ran out of power and shut down.  I’d forgotten I had it.  Only upon returning home would I be able to see exactly when, or more relevantly, where it had run out of power and examine the data logged and the uses of this information.

Wherever I may roam

Once home I needed to match the GPS data to the images.  Having synchronised the time on my trusty Leica D-Lux 3 with the Sony GPS-CS3 correctly all I needed to do was remove the Secure Digital card from the camera, insert it into the back of the GPS-CS3 and start Matching via the menu. 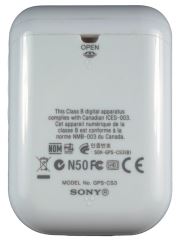 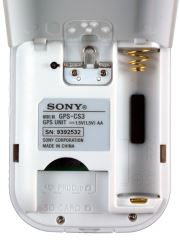 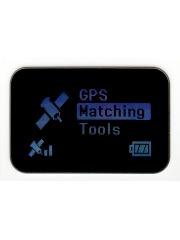 If done out in the field this require a charged battery to power the unit.  However, with the Sony GPS-CS3 plugged in to a PC via the USB connection, no internal battery is required.

If using a memory card other than SD or MS, this Matching process can also be done via a PC by downloading your images to the computer and using the software supplied with the GPS-CS3.  This software also features a clever tool that allows the time and date data of the images to be adjusted, so if you’d forgotten to set your camera correctly you can make the changes afterwards.  As one of the members of our trip had set their camera to the correct time, correct day, correct month, but the wrong year, this was particularly useful.

The same software, however, is also the Sony GPS-CS3’s biggest let down.  Bearing in mind how simple and straightforward the hardware is to use, the software is confusing and quite unintuitive.  There are 3 or 4 different programs supplied with the Sony and, as is the norm, no real instructions as to what does what or how to use it.  The guide that is provided on the CD-ROM is only relevant to one of the programs and makes little sense. 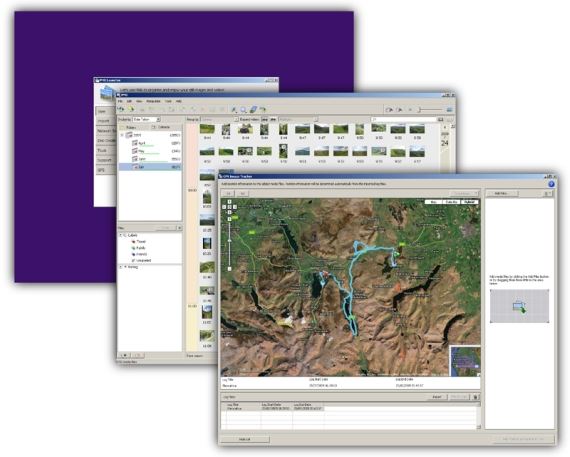 All I really wanted to do was to be able to view my images on a map.  The software promises this and also compatibility with Google Earth, should you want to upload your images.  After much hair pulling, I figured out how to do it.  To be fair, it’s not that difficult when you know how, but all the other unnecessary stuff surrounding the process makes it so darn awkward and I simply don’t understand why Sony have chosen to include most of it.

Rant over.  Once the images are on the map there are several viewing options.  You can choose to simply view the location the images were taken or you can view these locations superimposed upon the route travelled: 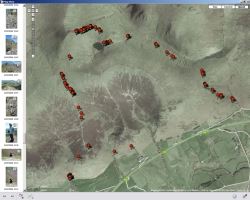 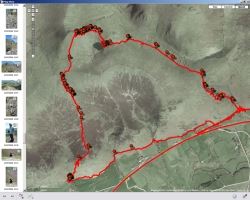 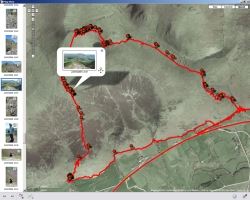 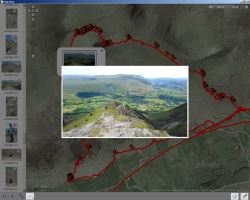 One important factor to mention is that the Sony software utilises Google for the maps and as such requires the PC in use to have internet connection.

At the end of the day

Aside from the serious landscape or reportage photographer for whom it is essential to record the locations that images were taken, GPS logging for photos is still something of a gimmick.  However, I must admit that I can see the attraction.  Having spent the day walking Blencathra and studying OS maps in the process it was intriguing to be able to look back over the images and see exactly where they were taken.  Likewise, it is a slightly different way to present your images to friends or family.

Essential photographic tool?  Probably not.  Interesting gadget for the photographer who has everything?  That’s more like it.