Sigma have such ubiquitous coverage of the lens market that you might assume they are just a mass appeal company. In fact their formidable range stretches from the affordable bottom to the heady top of the world of glass. They cover standard options but also pick up the slack when it comes to niche products. If you want a wider choice of lenses or your camera maker doesn't list exactly what you want you'll often find that it's Sigma that offer a solution. 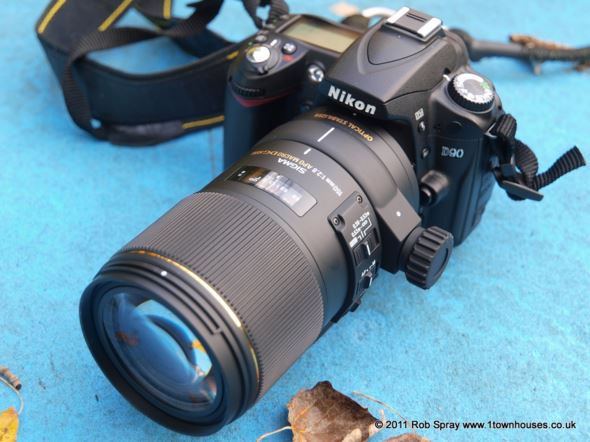 This Sigma 150mm f2.8 lens arrived with a fanfare, unfortunately not literally, but the packaging is so lavish that I was suspicious that I had been sent something massive for shooting distant royals or student nurses (isn't that what people do with really big lenses?). The outer box is huge and then inside you find a sizeable, zipped, padded lens case, a big one. The padded case is so large it's great for storage but not ideal for field use. I wondered if I'd be brave enough to go outside with the cannon that must be inside. However once through the packaging I was relieved that the lens was quite a normal size... but I wasn't disappointed. It is a great looking lens and even without touching it is obviously very well made, which bodes well for the optics – only fools make rubbish well!

I was half expecting the 150mm macro to be a slightly more grown up version of Sigma's 105mm macro that I tried last year. This, however, is a very different beast; modern, slick and smooth. The contrast between the two lenses is perhaps even more marked than it would have been since this is now the updated Mark 2 version of the 150mm. As well as a new paint job it has gained OS (Optical stabilisation). The finish is exemplary, a super smooth, silk black barrel with the heavy, cool feel that only metal manufacture can give. I vastly prefer this finish to the previous matt grey, textured mock flock – but that's just my personal preference. Where the 105mm was solid but relatively dated this is a serious product with proper spec for pro use, which is understandably reflected in the price 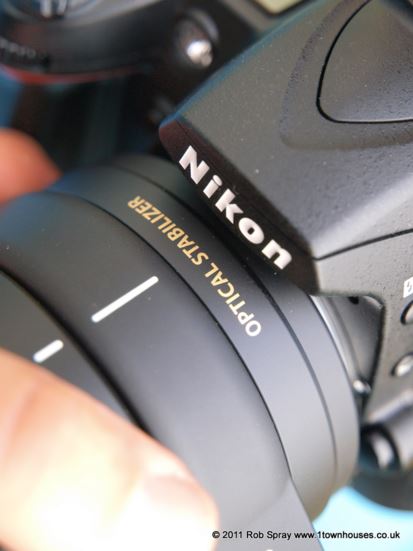 This updated, Mk2 has Optical Stabilisation

If the 150mm has a weakness it may be its weight, at 1150g it is undeniably heavy. It has put on 155g in the update over the Mark 1. This is doubly noticeable because it's a prime and doesn't expand at all. It is remarkably dense – but I like that. By way of contrast that increase in mass is the entire weight of the other lens I'm looking at right now, the Micro Four Thirds 9-18mm – what an odd couple they make!

The new lens design might add a lot of weight but that's all forgiven for its weather sealing. A lens of this stature and cost should be resilient, of course. It's another upgrade which plays right to my nerd. Given that this lens will attract wildlife photographers it's a very good move. It's comparatively simple to make lenses (especially primes) weatherproof but I always applaud it – nothing worse than a lens that has to hide at the first sign of rain! 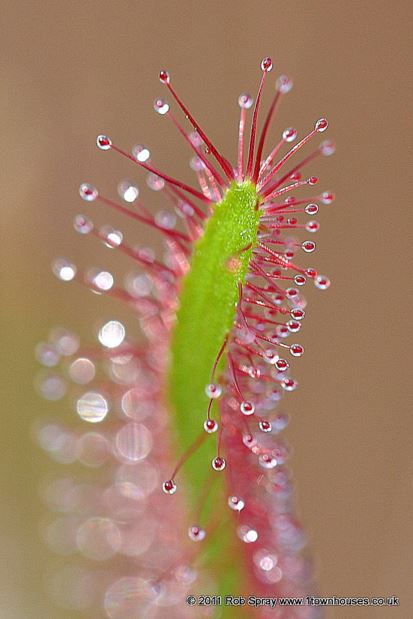 Steady as she goes

Whatever you call the OS it is good to have and can be felt working at distance – when used as a portrait or telephoto lens. Close up use really doesn't suit any OS/IS/VR systems as the the degree of movement is often too great for their limited scope of correction. I noticed little benefit from it when shooting macro but at distance it does the usual 3-4 stop business. All the examples were shot hand held. I'm used to IS and one downside can be power consumption but on the D90 shot life was great and I didn't thrash the kit hard enough day by day to provoke premature exhaustion of a single battery. The system doesn't appear to need to run 'in case' as it springs into action very quickly which must help ration its power requirements. 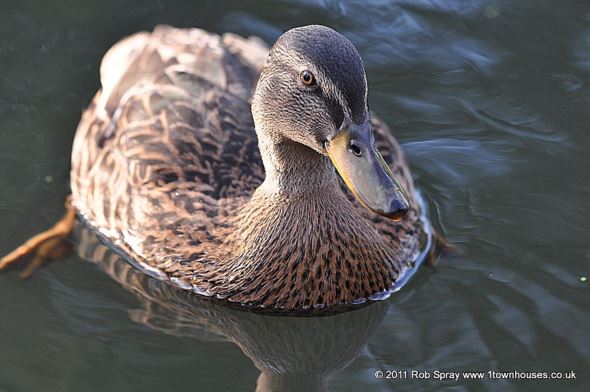 Modestly built camera bodies will wilt under the weight of this lens. The D90 I was using to evaluate it got very creaky. I've used bigger lenses on smaller, better built bodies but on F mount I'd suggest the natural partner for this would be a D200 or D7000 upward. The results aren't compromised by the imbalance but it makes a great excuse to trade up :-) The tripod mount relieves the stress on the body nicely and is one of the quicker acting designs I've seen, another plus. 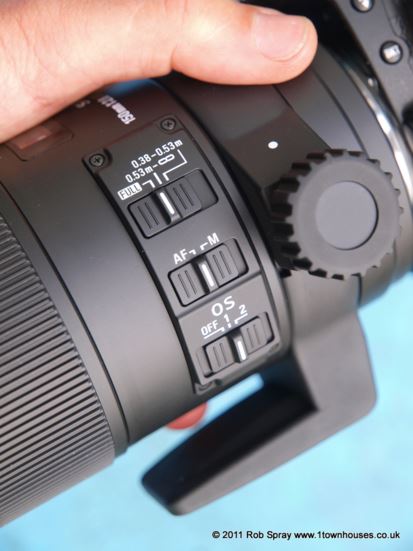 I don't think anyone will be confused by the switchgear

This hefty beast focuses to 38cm from the sensor, giving a working distance of around 20cm where the 150mm focal length provides 'life size' 1:1 enlargement on full frame sensors. On the crop sensors most of us use that will be practically increased to 225mm and 1.5:1 on Nikon (and the Sigma mount) and 240mm and 1.6:1 on Canon. That magnification is easy to access and much simpler to light than with close working, shorter macros. Conversely it's tiring to hold, hard to stabilise and so the excellent tripod mount is welcome. Focus is very fast for a macro lens which makes it as versatile as a long tele prime can be – much faster than the 60mm Nikkor and I'd say faster than the 18-105mm kit lens, which is no mean feat given the range it has to cover.

Of course with a very bright macro lens you can run into problems where a subject is so out of focus it simply can't be picked out of others. Normally I work the point closer by refocussing on nearby objects but if you can't there's a 3 position range limiting switch – Full, Full to 0.53m and 0.53m to 0.38m. The other switches are for the 2 mode image stabiliser and AF/MF. On the D90 that last switch is within a gnat's of the one on the body so you can check both a with single glance. In fact I never used either, the focus ring is a mechanically coupled but electronically clutched design that means you can manually refine focus at any time – my preferred method. 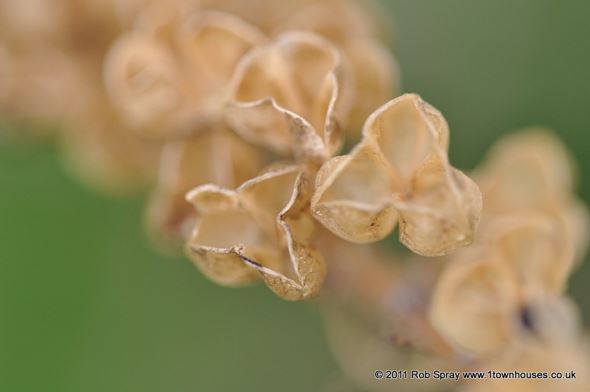 With such narrow depth of field (DoF) many object become abstracts

It took a while to get used to the D90's susceptibility to orange and the resulting red channel overload but looking at the results, rather than the histograms, the contrast and colour clarity look excellent. Reviews on other mounts praise colour and detail rendition so the Sigma seems to act as a transparent canvas for you to paint your pictures  – within the characteristic Nikon look. It was  informative to watch the display of effective aperture vary as the lens shuffles its internal optics. This is common as to focus very close macro lenses often have to change their focal length, a fact that normally goes unnoticed. At 1:1 apparently the effective aperture reads f/5.1, who knew? The big front element takes a 72mm filter, which I'd judge a wise precaution for a lens which you'll probably be sticking into undergrowth on a regular basis.

If you like selective focus then you're in for a treat

The results look excellent, nicely sharp wide open but with very, very shallow depth of field. The field of focus seems flat, not curved like the 105mm, and has a very smooth transition to OOF.

It sharpens further and quickly on stopping down one or two clicks, but don't go mad. You buy a lens like this so you can use it wide open, what's the point of a bright lens you must stop down? The character of this lens fits my Olympus mindset. Nice glass doesn't have to be coaxed away from maximum aperture. As a macro lens it is no surprise that this lens shines close up, I would echo some comments that for distant use f/5.6-7.1 does seem to be a sweet spot. 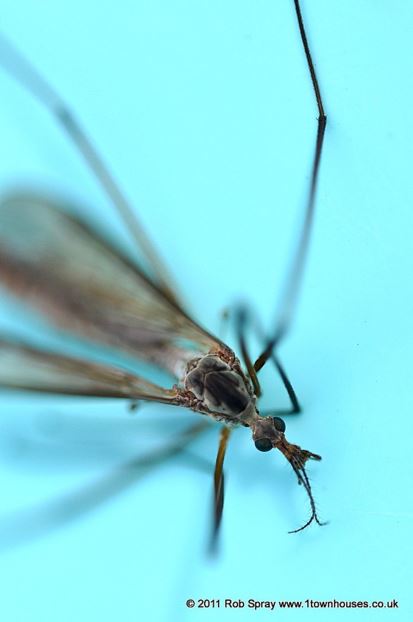 It's worth noting that this lens closes to a digital conscious f/22, not the very compromised f/45 that the 105mm offers. There's no problem offering big numbers but DSLR people need to be aware that diffraction will start to reduce sharpness beyond the teens so don't go stopping down like demons if you want to make the most of this, or any other lens.

Maybe I haven't waved my arms enough but I really enjoyed this lens, all I hated was the new version not being available on the Four Thirds mount. I'm probably going to have to buy one of the old ones to use underwater because its speed, clarity and build are a winning combination. My brief experience confirmed the many positive online opinions that I've seen.

This update is a great package – loved the optics, finish and handling... all I could object to is the weight. I think that's a price worth paying for such a handy lens even if you have to employ your family as bearers for your gear. From the new finish and OS optics to the smoothly overriding focus ring this is a premium lens that gives nothing away to big brand's better models.