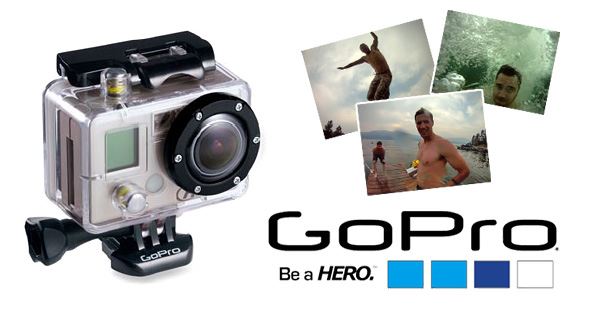 You can be forgiven for not having come across the diminutive GoPro HD Hero before - it's not what you might call a main-stream camera. That said, you might well have seen footage from one of these little mini movie makers - earlier this year the journey of the Chilean miners up the rescue shaft was filmed using a GoPro camera attached to the specially built pod!

So what is a GoPro HD Hero? Put simply, it's a small, compact and easy to use HD camcorder and stills camera, capable of recording video in full 1080P high definition or capturing great quality 5 megapixel still photos. These characteristics on their own really don't say anything particularly special - after all, compact HD camcorders are widely available and with HD video becoming a standard feature on digital stills cameras, the options for compact video recording gadgets have never been greater. What's more, the GoProis a relatively basic beast; it has a fixed lens and no external inputs, so what exactly is it that makes the HD Hero worthy of note?

GoPro’s HD Hero is the world’s highest performance wearable 1080p HD video and still photo camera rivalling cameras costing 10x the price. How? Our team consists of some of the brightest minds in Silicon Valley who also happen to be obsessed with outdoor sports, race cars, and all things moto. Athletic super geeks? Indeed.

The HD Hero is compatible with all GoPro Hero camera mounting accessories, so it's very easy to expand the functionality of your camera to suction cup to vehicles, clamp to bike handlebars and seat posts, mount to surfboards, and even be worn on the wrist or chest.

Don’t let a little water, or even a ton of water get in the way of getting the shot. Proven in heavy surf from Hawaii to Tahiti, Southern Mexico to Northern California, HD Hero cameras can handle it thanks their highly engineered polycarbonate exoskeletal housing. Waterproof to 180’/60m and tough enough to take a spin across the asphalt, GoPros are built to take a beating. Replacement lens kits are also available, so there’s little worry of scratching the tempered glass lens while going for glory. Trash the housing in a massive crash? Replacements are available. It’s a GoPro...go for it.

Living on the edge?

A short while back the lovely people at Xtreme Video lent us a GoPro HD Hero to test, try and generally have a play with. No sooner had it arrived at the Wex Photographic offices then people were buzzing to have a go with it. The problem for me was that I had nothing suitably exciting planned that would get the best out of the HD Hero, but I wasn't about to give up the opportunity to try out the little camera, so took it home anyway. It was supplied with a range of mounting accessories including clamps, a large suction cup and various other devices that could be stuck to flat or curved surfaces. Bear in mind at this point that there are several different kit versions of the GoPro HD Hero and the accessories you get with the camera will depend which kit you opt for.

The camera itself consists of 2 separate parts; the actual camera and the hard shell that the camera sits in. The camera controls are ridiculously simple - there are only a couple of buttons to do anything! But because of this I had a quick read of the instructions to find out how I stopped, started and changed the settings and modes, because despite looking deceptively basic, the HD Hero actually offers several features.

The HD Hero cameras offers three different HD resolutions, giving you three filming modes to capture the best angles for any given activity:

HD Hero cameras can also shoot hands-free, 5 megapixel photos automatically at 2, 5, 10, 30 or 60 second intervals until the batteries die or the SD card is full (2.5 hours). Alternatively you can set it to single shot, triple shot, or self timer for more traditional photo taking.

The HD Hero was supplied with a bicycle post mount that allows the camera to be attached to the handlebars or seat-post of a bike. Although it's not the most exciting route, I do cycle to work so decided to have a go at filming my commute. With the camera's settings set and the bike attachments attached, I pressed record and set off.

Obviously the footage has been edited (the whole start-to-finish journey would be far too tedious) and some audio has been added (the whistling wind and passing traffic noise was nothing special) but as a first time effort it was a good starting point. You may notice that the video gets progressively blurred and cloudy. This is because I made the mistake of changing the HD Hero's settings and then putting the camera into its casing while indoors in the warm. With the case air tight, when the camera was taken out into the cold air the clear casing began to steam up, something I hadn't realised until I arrived at work to find the camera's lens almost totally obscured by mist.

With this important lesson learned, I gave it another go the next morning, this time attaching the HD Hero to various points around Delilah, my much loved car. What I find most impressive about this test, though, is the lack of movement in the camera's footage. There's little judder, shake or vibration, making the resulting video clear and easy to watch. This time the audio has been left as it was and although there's not much to hear other than the growls and rumbles of the engine and wheels, neither is it too distracting. Truth be told, the HD Hero's inbuilt microphone is actually pretty good - certainly good enough to record conversation of background ambience in a movie.

We’ve invested more in the HD Hero's sound system than most companies spend on their entire camera development. You’ll only be hearing the sounds of your sport, not the howl of the wind. How? Obsessive audio engineering and an understanding that good sound is as important as good video.

Boys and their toys

As gadgets go, the HD Hero is a pretty good one. Little wonder then that the next person to get their hands on the Hero was Wex Photographic' gadget loving, RC car racing Contact Centre Manager Lee Flynn. He took the HD Hero plus various attachments along to a new car track where he attached the camera directly to the car. There's a little more "bouncing" in this footage - a result of the RC car's springy suspension and its proximity to the ground - but it's still one heck of a video. Check out the spin at 3:18!

Of course, you need to ensure that the camera is properly fitted and securely fixed using the correct attachments. It's a good job that the GoPro HD Hero is such a tough little cookie, judging by Lee's first attempt:

The third and final member of the Wex Photographic staff to take the GoPro HD Hero out for a test drive was our Deputy Warehouse Manager Nathan Lee. Nathan is a keen kite surfer, so his loan period promised to produce some cracking footage. And it did, according to Nathan. Apparently he managed to get some great video of him kite-surfing - speeding along the water and pulling stunt jumps for the benefit of the GoPro. Unfortunately, during one particularly abrupt Nathan/wave interface his board took a tumble and the HD Hero camera was dislodged from its suction cup mount and promptly sank into the depths of the North Sea. Please take note: the GoPro HD Hero does NOT float.

Following a particularly grovelling email to the Xtreme Video guys, we were sent another demo unit on the strict understanding that the GoPro HD Hero should only be used on the water in conjunction with the Surf Hero extension kit which provides a far more secure attachment to the surf board, complete with a secure lanyard for extra safety. With his wrists slapped, Nathan took the HD Hero out onto the water once more...

As it turned out, having taken the HD Hero out to sea and managed to get it back onto dry land, Nathan was so impressed by the little GoPro that he actually went ahead and bought one himself, so we can look forward to seeing some more kite-surfing footage from him when the weather gets better.

To sum up, the GoPro HD Hero is a fantastic little camera that I would recommend to anyone. There are so many places you can use it and things you can do with it - anybody can make magnificent movies with the GoPro HD Hero! Don't just take my word for it - after all, we only had the HD Hero for a short time, but as the following videos show, with some imagination, time and the right locations, it's possible to capture jaw-dropping video with the GoPro HD Hero. 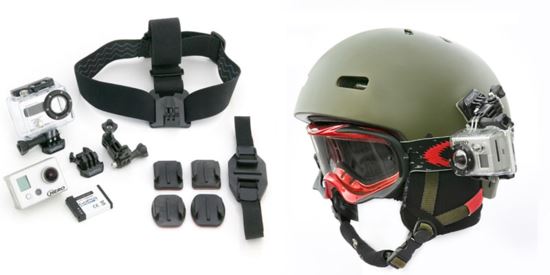 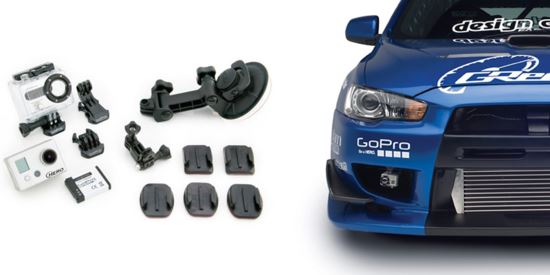 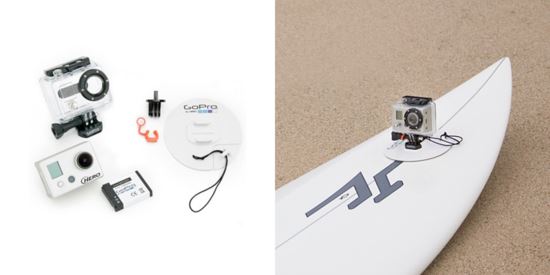 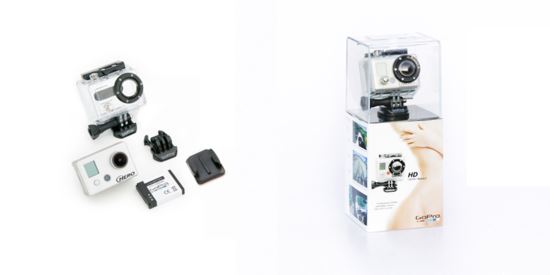