My Velbon experience began in a very low key way – the box is plain to the point of over confidence. Of course when you know what to expect there's no need to shout about it but a little flash would flatter the buyer. Inside there's a simple bag which just happens to hold a tripod which Velbon proudly claim is pushing at the boundaries of technology. I'd hazard a guess that's it not megahertz and pixels which are reaching for the stars here but clever ideas and metallurgy which allow a very small, quite light, tripod to expand beyond expectations and support ambitious gear.

The bottom line for this new player is that here is a full size tripod that can cope with a pro weight camera but packs right down so you can take it out without being exhausted - of course I'm only reflecting my own modest fitness not the super human stamina of all WEX's customers ;-)

Looking at the Velbon Ultra REXi L when packed it's hard to square the various numbers. Only the second and last (5th) sections of the legs have knurled grips so there's little clue that there are 4 more hidden in those pleasantly sturdy 30mm legs. In fact the lower grips are the feet too so there's no space wasted. The twist lock trunnions (that's an appealing word) steal very little of the length so this 36cm midget can expand up to 1.53m – which is 4 and a quarter times its packed length. The 30mm legs are the only clue that there's more than meets the eye packed away. The contoured tubing is aluminium which remains commendably rigid. Composite might be lighter but metal magic ensures that despite thin material there's little give. Thin walls mean that the sections don't have to step down severely to telescope together. The legs reduce by only 3mm for each section (so 30, 27 ,23 , 20 and 17mm – for sections 1 to 5). The gentle ying-yang profile of the tube which works the twist lock adds more rigidity and longitudinal stability than plain, round tube could offer. 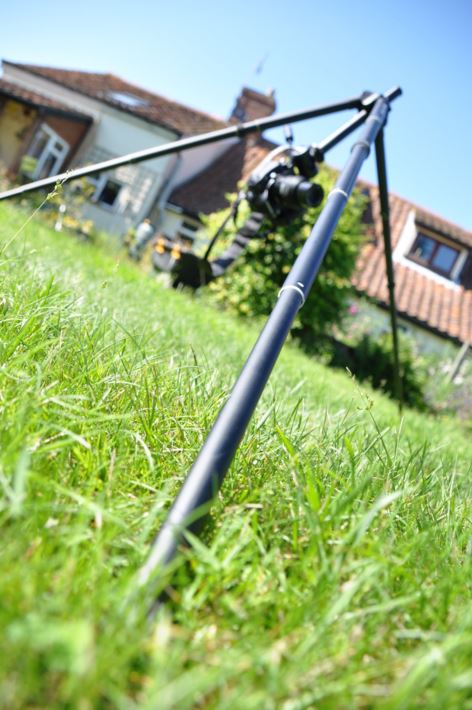 The finish of the metal parts is so smooth that the uninitiated might mistake some of them for plastic mouldings – I did and I had to stand in the corner and think about what I had done! Of course once you touch the parts it's obvious that they're not plastic or even composite. The leg sections are aluminium and the shoulder (where the legs meet) is a magnesium casting. It's not hard to understand why Velbon are happy to offer a 5 year warranty.

Once planted at full height you can feel just a little rotational give if you shimmy the head hard - but not if you are trying to shoot photographs! Predictably, it's the final section which has most compliance and so if you need even more stability and not maximum height just slide it back inside. There's no lower leg brace which adds an open, spindly air to the extended tripod but the cast magnesium shoulder is where all the leg control is seated and it does a sterling job. The shoulder lets you lock the legs out at 3 different spreads – normal (25o), low (45o) and spread eagled (79o). Even if you don't need them every day, the wider positions are plenty secure enough that I was happy to dangle 10x the value of the tripod over a 25ft deep well. 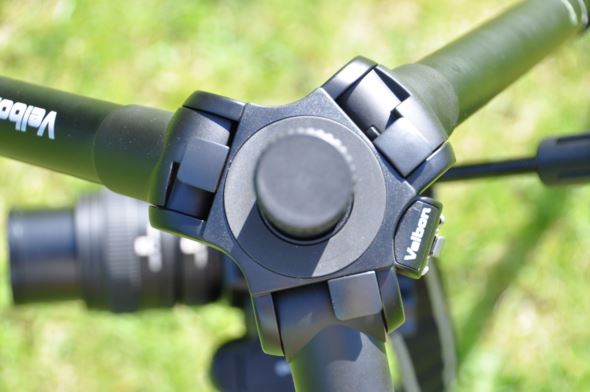 As an infrequent tripod user I have to remind myself that there are some circumstances where supports and camera IS don't mix and so it's worth making the most of the physical stability by deactivating your IS if it has a tendency to assume instability and add nasties.

On the right track

All three plump legs were a bit too much to squeeze into the mean tripod pouch on a Lowepro Flipside 300AW but a pair fitted nicely and the length was just right.  From new it feels as though the legs would retain their oily, smooth resistance, but I guess they may free with use and  a simple restraint strap would prevent impromptu legs kicks spearing your followers. At 1.3kg I could certainly feel it was there but like a small lightweight not a stable full-size support which would have had me on my back like a turtle. That old school 3 section full size tripod would not only weight around twice as much but also be nearly twice and long and so not fit on the back of the pack at all.

The rated payload is a generous 4kg limit – which is a hefty SLR and honking great lens. I don't have a combination which is that heavy (unless I tried one of my housed cameras!) so I stacked up a few lead weights to test that claim and wasn't really surprised that it was true. The 4kg rating is with the legs as split as Oasis – it's an impressive sight and the palpable stress must be terrific. Once akimbo that load (7 pints worth!) feels like it's no problem at all, to an extent that figure will also vary with the head you choose. It's available naked if you want to carry over a favourite head or as several packages with a selection of heads which are better value than a separate purchase if you decide to get a new one – you might well opt to as it deserves a good one and there's no point plonking just any old hardware on top. I tried it with the Velbon PH-157Q, which I think is a good choice for large compacts, small SLRs and smooth enough for some occasional video duty. If you are pushing at that 4kg limit I think you'd want something larger with a wider quick release plate. 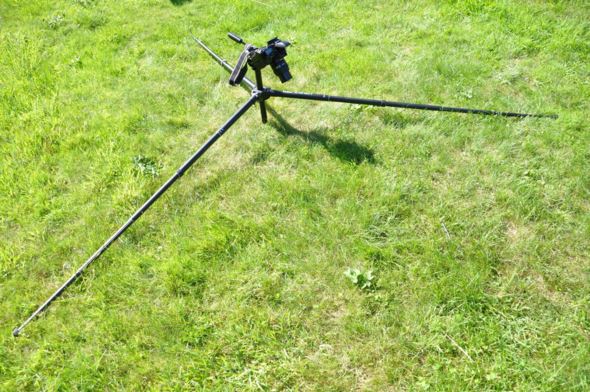 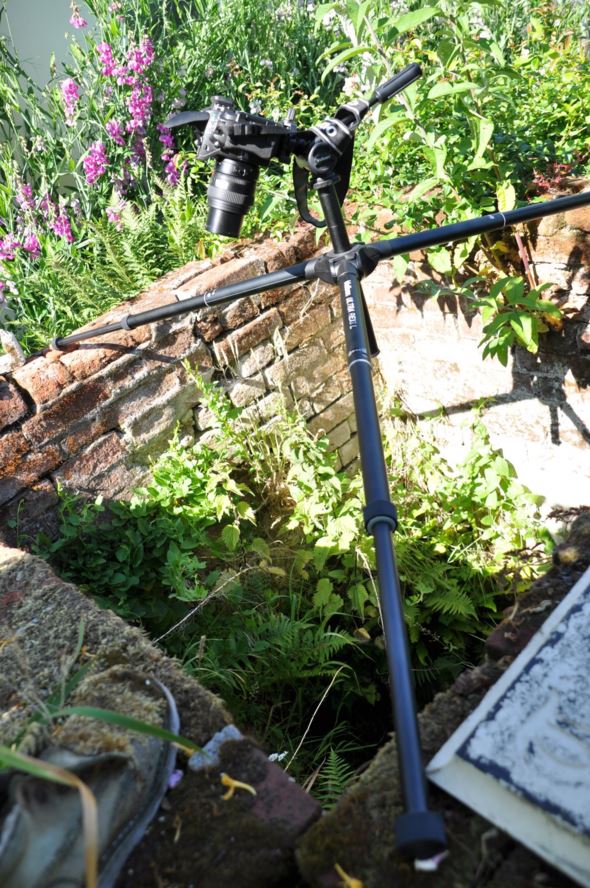 ...so I didn't worry about hanging over this well!

Of course you can attach any standard head and the kit includes a spanner to swap the top screw over from 1/4” to 3/8” Whitworth. Some people have wondered about the selection of grub screws and Allen keys but the threaded holes in the mount are the giveaway – those are to lock the head you fit them, so it simply can't undo at the wrong moment (it would always be the wrong moment wouldn't it?)

Velbon are one of those enigmatic Japanese companies with a bit of soul, despite the claim of being the world's largest specialist tripod maker, they don't pretend it's all designed by robots. There's a main man with a name who guides the firm. That helps avoid the paralysing misery of focus groups, handing off iPad sketches to students and lends the clarity of a personal vision. That  kind of set up gives you distinctive products which become fixtures for your shooting and this tripod can happily mix it with the Italian materials magicians.

Those patented trunnions are the making of this clever tripod – though I like the three position legs too. This is a quality product that's a pleasure to use and explore. It's not that it's covered in countless or extravagant details just that the sparing, efficient design keeps revealing neat touches that make it work so well. Maybe I'm gushing because I haven't seen enough tripods but this make s a bull's eye strike on the target it was lobbed at. 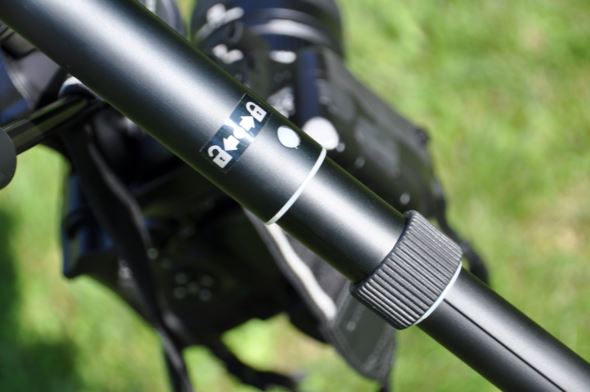 The legs sections all twist-lock at any length

It's light enough to carry and small enough to fit on the bag of a pack so you actually will, at the same time it's not just a compromise camera support it's tall enough for standing portraits, gets down to ground level for bugs and flower and can even span a gap of more than 2m.

That leaves only two complaints; first; what's with that name? Second: the design is so clean it's short of a few simple eyes or hooks for weights and securing to baggage. I suppose that would have compromised the clean design so maybe even that's an admirable trait!