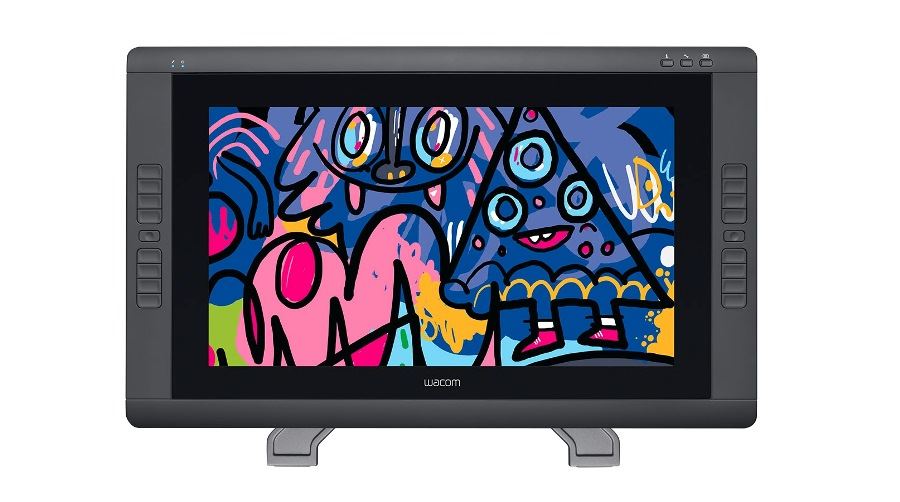 The Cintiq 22HD Creative Pen Display was launched back in 2012, but it’s still readily available and widely used today. I’ve been using graphics tablets since 2006, but while I was well-versed in using standard graphics tablets such as Wacom’s Intuos Pro, the Cintiq 22HD’s interactive screen was an entirely new experience for me (at the time). Wacom’s fantastic Cintiq tablets are as close as it gets to putting digital pen to paper, and the Cintiq 22HD still comes highly recommended. Let’s revisit my review…

The overall look and feel is very slick and modern out of the box. The same nods to the Intuos range are here too, with ExpressKeys to the left and right of the active area, or in this case the display area. There are three buttons at the top edge too, providing menu and settings shortcuts. At the back you’ll find two control strips which can hold a maximum of four user-assigned functions and at the top back edge is an on/off switch. 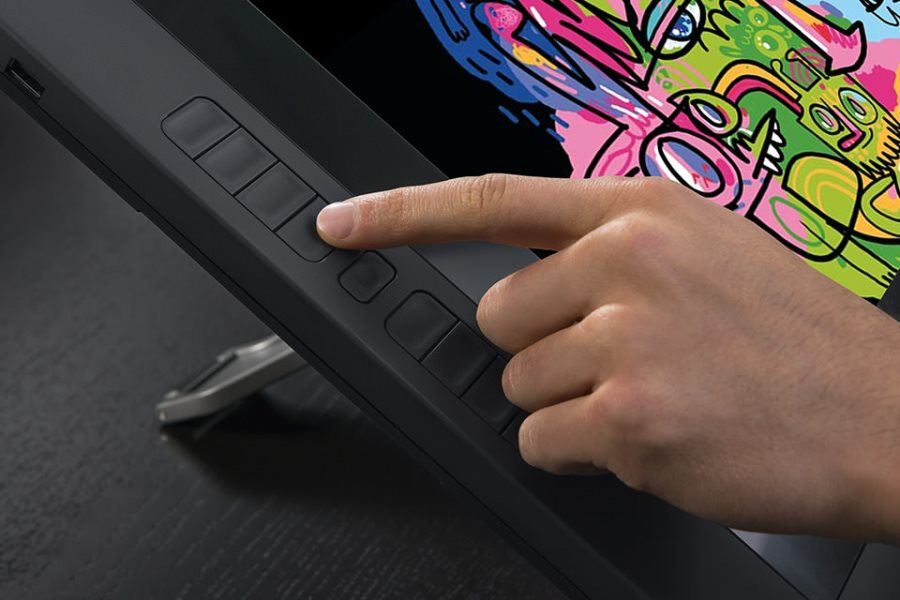 The tablet itself is about 55mm thick, not much deeper than most flat-screen TVs. You can use it without the stand, but with the cabling at the back, I think I would find this a slightly uncomfortable option. The edges are ergonomically shaped and there are plenty of vents at the back to help keep the device cool to the touch.

Next up is the Stand. Apart from looking like a Star Trek version of a boomerang, it has a satisfying weight and sturdiness. It is reassuring to note there are no flimsy components, as the display is a very precious item indeed and not something you’d want to become unhooked from the stand too easily.

Attaching the stand is no effort at all. The monitor simply slips onto the stand and with a steady hand to glide it onto the stopper, on the back of the tablet, it locks in. The quick guide manual does note to leave the stand collapsed (or in a flat position), until the driver is installed. You can then adjust the tablet’s tilt at your leisure.

Using the two levers on either side of the stand, in tandem, produces a gratifyingly smooth up or down movement of the screen. A few minutes of fiddling later and I was happy with the setup. However, I did find that when using different applications, I was altering the tilt. For instance, with Photoshop I wanted to angle the screen a little flatter, but when working through typed documents I found that I tilted the screen to stand at a more vertical angle.

This is, of course, down to personal preference, but it does highlight how easy the stand is to manoeuvre. I also experienced no loss of friction or notions that the stand would slacken over time. With this stand and setup, the monitor is free to rotate 180 degrees. I didn’t really need to use this function for the purpose of this review, but did find the action was smooth and not in any way likely to move by itself – even when applying a little more pressure with the pen than usual.

Connecting the Cintiq 22HD to your computer is very straightforward. It’s worth remembering that this tablet was released back in 2012. As such it has a DVI-I input, and includes a DVI-D to DVI-D cable and a USB cable. This is certainly useful to know as you may need to purchase an adapter, depending on what inputs your computer has available. The Cintiq 22HD also uses an AC Adaptor and once the three cables are plugged in, you can start setting the tablet up.

Obtaining the necessary drivers is extremely simple too. The tablet includes a disc, but you can also download the software from the Wacom website. Once that’s done, you’ll need to navigate an easy-to-follow calibration tool (this calibrates the pen and Cintiq display together). It’s worth noting that if you do move the display a great deal for various applications, you may find the need to recalibrate the pen and display to suit.

The pen display’s colour gamut is 72% of Adobe RGB. The resolution is full HD (1920 x 1080), with a 600:1 contrast ratio, so I’m not concerned about eye strain when working with the tablet. I would of course recommend taking regular eye breaks though, to give your peepers time to readjust.

From removing the Cintiq 22HD from its box to having it set up and ready to go took about 10-15 minutes, including the software install. For this review, I turned off my monitor and used the pen display on its own. Without my computer monitor I found that using my keyboard felt a little disjointed. I’d recommend running both your monitor and the tablet together, if you use your keyboard a lot (providing you have enough room on your desk!).

The Cintiq 22HD has a resolution of 5,080 LPI (lines per inch), and a pen pressure level of 2,048. I found drawing and masking to be a relatively natural experience, although I noticed a very small distance (or parallax) between initial contact with the screen and the strokes produced on the display. However, this isn’t too intrusive, and after a short time I adapted to it by recalibrating the pen and ensuring I was set for right-handed use.

My day job often involves image manipulation to some degree – applying cutouts and masks – so the first job I tackled was selecting an area with the Lasso tool in Photoshop. I then applied a light brush colour to the area that was masked off, and found the brush strokes were smooth and responsive. I did find that I reset the pen calibration once, to make sure I was as accurate as possible, and this was only while I was shifting the screen to a more comfortable position. The immediate benefit of working directly on screen is that the accuracy of the cutout is increased, making the process far speedier than using my trusty Intuos graphics tablet. 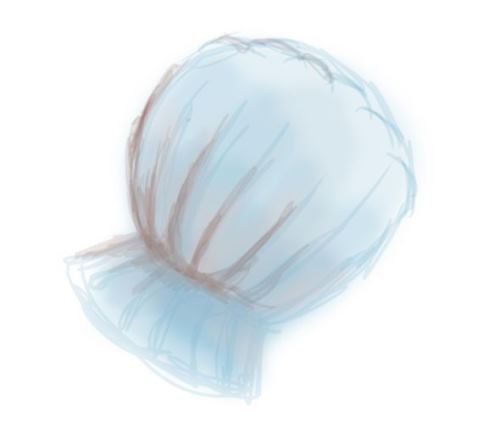 I’ve been intrigued by digital artistry and the amount of likeness to art materials that can be achieved using a stylus, multiple layers and imaging software, so I tried to draw a clam-style shell (albeit quite a crude one). I very quickly found myself absorbed in building up the colour by applying pressure to the display (via the pen), while changing tools, opacities and techniques as I went.

I assigned layers to each style, such as a background wash, soft lines and harsh lines. This allowed me to flick layers on and off at will, to suit my thought process. I managed to lose myself for a good ten minutes. The ability to erase or undo what you don’t like is a godsend! Using watercolour paint and paper during an art exam from my distant past, I can vouch that it’s far harder to remove a physical spec of black paint from a beautiful blue wash than it is to remove a similar mistake on a digital canvas.

Next I tried a Keith Haring-esque approach with a press image shot of the Canon EOS M (remember, this tablet was released back in 2012). Using the camera as a background layer and applying broad white strokes to the top image, I indulged in a very quick artwork (Canon, please forgive me…). Once again, working with layers gave me the ability to try various washes and turn them off if I didn’t like the results.

None of my efforts are Summer Exhibition or Turner Prize worthy, and to be honest, I’m slightly embarrassed by them. But as a test, I felt they were necessary and actually they were a lot of fun to do!

Just a monitor for your lap?

For those thinking the Cintiq 22HD is just a monitor for your lap, it’s everything I love about graphics tablets and more. You see, generic graphics tablets are fantastic tools, but you’re forced to look at your monitor while you motion with your pen a good few inches away. This takes some getting used to. However, a pen display like the Cintiq 22HD takes away that additional step.

When you gesture with your pen the Cintiq 22HD’s display becomes a giant art pad. Its intuitive nature is such that I would think most graphic designers, animators, illustrators and photographers would love to own one – myself included! When the Cintiq 22HD came out in 2012, it did everything right. It was a joy to use seven years ago and it’s a joy to use today, a bit like pen and paper really.

Who’s it for? Its intuitive nature means it could appeal to any creative. However, if you’re an illustrator, I’d imagine using a pen display for the first time is a very liberating experience indeed.

What does it compare to? The XP-PEN Artist 22E Pro.

Why should you care? It gives you greater control of your ‘brush strokes’ and brings the digital experience a step closer to working on a real canvas.

Angela Pickavance is our resident Photoshop and graphics tablet expert, having used them for the last six years in her role as Wex Photo Video’s offline marketing and design manager.

Which EIZO Monitor Should I Buy?