Wacom are in a class of their own, literally. I can’t think of a single competitor who makes a range of tablets that are as synonymous with the digital side of photography as Wacom. They are the pen and tablet. If you Google pen and tablet, and see what else comes up, you’ll find it’s not much of any consequence. Maybe the rest are playing catch up…

Using or having a tablet is almost taken for granted, not just by re-touchers, but by photographers too. You can’t retouch as well with a mouse, no matter what direction it scrolls in.

The Express Keys and Express Keys Displays are on the left hand side of the tablet. They are a customisable set of keys that are used for one click functions. The displays are there to show you what the function of each key is configured to, either as the default set, or as customised options that you’ve set yourself. There are eight in total, situated above and below the Touch Ring. The Touch Ring is just as it sounds, and is used like a scroll wheel (more of that later), whilst the surface of the tablet is smooth as silk.

Below is a screen grab from the tablets preferences: 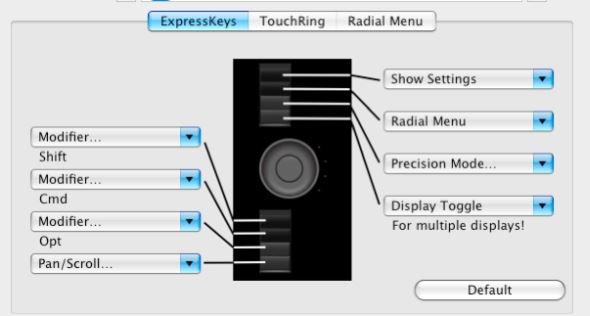 A USB Cable connects either left or right handed, dependent on which model you bought, which is a touch of genius. Maybe genius is too strong a word, but it’s going to be a big relief if you are left handed. There’s two USB ports on either side of the Wacom tablet, so depending on your handed orientation, you just turn it around and use the most convenient USB port to plug in. The displays on the keys adjust to their new position.

With the pen comes an eraser, a rubberised grip, rocker style duo switch, replaceable nib, and coloured rings with which you can personalise your pen. You can twist the nib off to replace with one of the many nibs that come in the base of the pen holder. You get
5 standard, 1 flex, 1 stroke, and 3 hard felt, so depending on your application you can change the feel of your pen nib. This has got to be good for applications such as the photographer’s lifeline Adobe CS4, and others such Corel Painter. I have to say that I’ve never actually needed a replacement nib and certainly not five. The spares may be a little indulgent on Wacom’s part, but I don’t think anyone will complain. The pen is designed with comfort in mind, making long hours on the Mac easier.

The pen can also sit either vertically in the holder or more cigar like, laid across the top. Vertical wins here; you have too much time on your hands if you’re delicately laying the pen down cigar style – or you have an expensive force of habit… 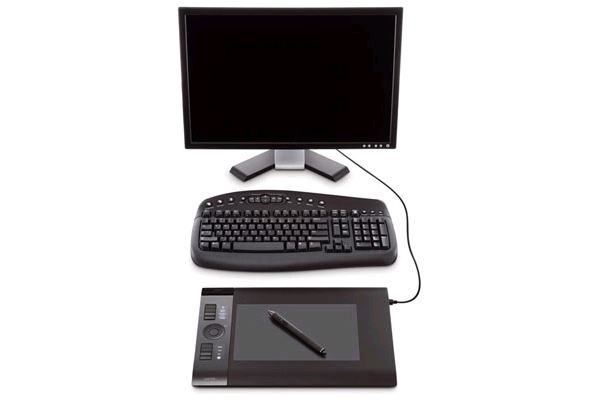 Every feature of the Wacom Intuos 4 seems to be customisable in some way and the pen is no exception. The side of the pen features a “Duo Switch”. Mine is currently set to “undo” for Photoshop on the lower click, so I can step back when I’m retouching. There’s an eraser on the top end, which is probably handier for users who are actually drawing with the Wacom tablet, but if you turn it over to use the eraser, whatever program you’re in will automatically switch to the eraser tool within that app.

Within your System Preferences (I use a Mac) you’ll get the Wacom tablet listed in the “other” section. Click this and you’ll get a window where you can customise and adjust to your heart’s content. Tip sensitivity and Tip feel for the pen are both here, I’ve left mine on the default settings for these, but you can adjust from a very soft pen feel to very hard.

I’m mainly a CS4 user, where your brushes can be set for hardness etc within the application, but this will allow you to go one step further and control the feel of your pen. This is very much down to the individual. There’s a couple of different re-touchers on the main Mac in this office, along with myself, so I’m usually resetting to default or changing the workspace back to my own – everyone is different in their approach; I favour the default modes, and leave the expert bits to the experts. In no time you’ll find what works best for you.

Incidentally, regarding the feel of the pen and response of the tablet, the Intuos 4 is new to me as I’m usually on a Wacom Intuos 3. There’s not much to dislike about the Intuos 3 version, but even on just an aesthetic level the Intuos 4 looks a lot slicker. It’s a little bit more twenty ten – and it certainly feels better too. Sadly I’ll have to send this one back, so it’ll be back to the 3... But that never did me any harm.

There’s a current pressure indicator on the Wacom Intuos 4 too that tells you how hard (or full) you are using the pen, it’s like a barometer that measures your strength. It’s a great widget on your desktop for about five minutes, but probably not necessary to have visible all the time; and I’ve just discovered that I’m clearly heavy handed… Click the details button in here to bring up a scratch pad that you can try the pen settings on so you’re not continually switching in and out of the system preferences and your application. I think this is a great help in finding what feels good for you – it’s like the ultimate biro testing pad, but not in a stationary shop.

In the system preferences is where you also set the duo switch option. The default settings are double and right click, I like the double click a lot, and it’s amazing how quickly you can retrain the brain to adapt. I’m subconsciously double clicking with the duo switch within a week of use. My lower click is the aforementioned undo for Adobe CS4; the default is set to right click, but that right click always seems a bit PC user, so it may be more use if a PC is your game.

Clicking onto the functions settings (second row down on the Tool line - see image) and the window appears that lets you configure the Express Keys, Touch Ring, and the Radial Menu. 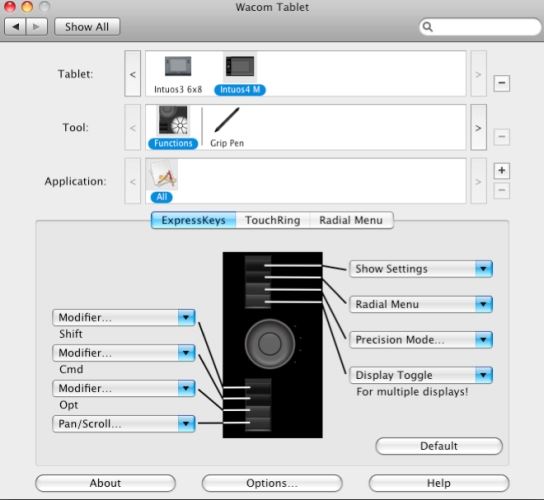 You can label your express keys too, with up to two lines of text that will appear next to the express key. Sure it becomes a habit after a while and you won’t need to look, but for the forgetful, or for those with more than one user it’s a pretty good (looking) feature. Again, you click the Touch Ring menu to bring up the options for the Touch Ring: You can toggle between functions, with each click you switch function - and a small LED lights up next to the function you are set to. The default set are Auto Scroll / Zoom, Cycle Layers (as in Photoshop), Brush Size and Canvas Rotation. I think that more time you spend with the Wacom will lead you to the functions that suit you the best. Apart from the Canvas Rotation, I’m starting to find the default set pretty handy. 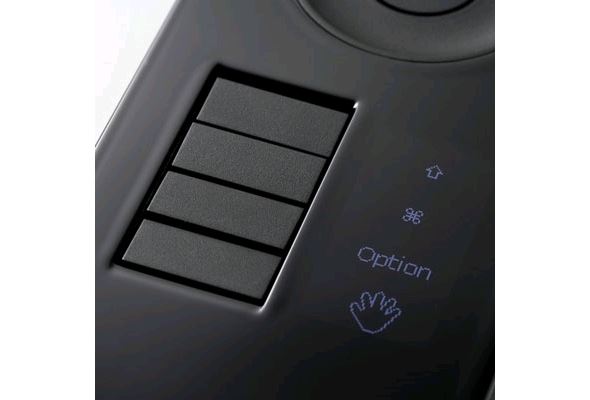 You can of course use your key strokes as ever, but if you’re spending long hours at your desk, it’s not a bad way of keeping things within easy reach – ask your osteopath... you don’t want to be stretching repeatedly to your keys...

One small word of warning: I spent twenty minutes wondering why my images on screen kept rotating 45 degrees, only to find that one of the touch ring key strokes was set to rotate. Each time I moved my hand over the touch ring to use the keyboard I was lightly brushing the ring and that was rotating the image… So it’s on the sensitive side; I’d suggest not using these keys for delete :)

The Radial Menu is pretty handy too, making switching to different apps easy – you can get to your email and internet at the click of a button. This isn’t something that you can’t already do on your computer, but it just keeps a lot of the features in one place for control, so the keyboard takes on a secondary role; it’s nearly but not quite obsolete. 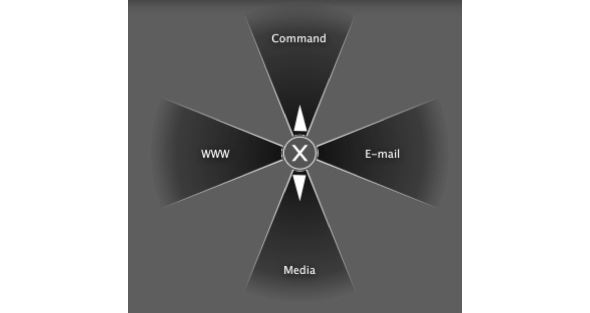 Portability... The Wacom Intuos 4 is not far short of plug and play, and if you shoot in different locations and take a computer with you, the A5 model isn’t going to cause you back ache. I travel with a mini Wacom Bamboo just to keep me out of the frustrations of trying to cut a mask on a laptop mouse pad.

I’m no stranger to Wacom mice, and I have one with my Intuos 3. It sits at the side for occasional use and does exactly what it’s intended for.

In comparison to other bits that I’ve reviewed for Wex Photographic, the Wacom is not the most exciting (the cameras usually win that one), but in terms of use, it’s the one item that has blended in seamlessly to my work flow. I think if you don’t have or have never had a pen and tablet, you won’t find a better starting place. If you have a Wacom graphics tablet already, but maybe not an Intuos 4, then you already have a good idea of what you’re getting into.

I’m in the second category here, and my Intuos 3 is now nestling by the “old Mac” and the Intuos 4 is gripping tightly to my main Mac. But like everything I review, it has to get returned to WEX.

For me, the bits I’ll miss most are the sleek looks, the rocker switch on the pen, and the scroll wheel; no more apple plus and minus for sizing images up and down on the screen, it’s just as much and as little as I like. I actually have the rocker switch on the Wacom Intuos 3, I just never bothered finding out what it was for – looks like it’s time to go reset that one then.

If you have a previous model of Wacom I’d give this a healthy 7 out of 10 – there are some nice touches and improvements that you will benefit from and appreciate. If you’ve never had a Wacom, I’d give this 8.5 out of 10, there’s a whole new dimension to discover.

Overall "already own a Wacom" score: