Am I really hidden, is hiding actually really the point, isn't that fox / badger / bird looking right at me? These are questions I've asked myself for years. I recently spent a few hours in a hide that my friend had erected in a busy rookery. Now rooks, being members of the crow family, are in the top set when it comes to bird brains; amongst the very smartest and after hundreds of years of persecution, they are extremely wary too. At the top of the rookery tower my friend had built a makeshift hide using wood, hessian, canvas and a ‘mish-mash’ of camouflaged scrim netting. It was all pretty tidy, smart and well designed and constructed, but then he’s a professional wildlife film-maker and knows that bodging is never good in the long term. Or in the wind and the rain…

He very kindly “put me into” the hide, that is to say he came up to the top of the tower and then made himself really obvious as he walked and drove away so that these clever birds would think that people had come… and then gone. In fact, as it’s likely that rooks can count, he also held up a green jacket to match my own as he left to trick them into thinking that two people had come… and then gone. 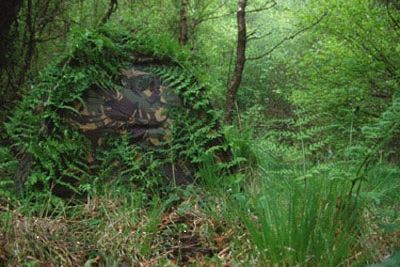 Can you see what it is yet? Wildlife Watching Mini Dome Hide in Camouflage

The birds were slow to return, being ultra cautious, so I sat motionless until they had all settled. Then I released my tripod head lock and began to slowly pan it towards the birds. Amid a great flurry and cawing the whole lot flew off. Gradually they came back and this time it was me who was ultra cautious when moving the camera. But not cautious enough as they all went berserk again. Luckily the weather was fair so there was little danger of the few eggs that had been laid getting chilled and I could continue. To cut a long six hours short, by the time my mate came to get me out I had been able to take some very slight but essential liberties – like moving the lens extremely slowly – without them getting too upset. I didn’t get anything of any use; the closest females were never fed by the males at their nests and it was all very twiggy, but I had an interesting time watching their behaviour. I also came to the following conclusion:

They knew I, or someone, or something, was in that hide. They had come to tolerate that because no threat ensued from my presence and more importantly my behaviour and position were predictable. It’s the latter which is more important as animals like predictability; if they know where you are and what you’ll be doing there, they’re cool. Change the rules and they’ll freak.

There is a marsh I know where you can get really close to wildfowl and waders in the winter without a hide. You can just walk up to the fence and they’ll all ignore you and carry on with their birdy business. You can talk, move about, wear clown costumes, probably sing and dance, and they just don’t care. But if you step over that fence the whole field will instantly take to the air. Simply because you have crossed the line between the place where they are always used to seeing photographers dressed as clowns and the place where they don’t see them. To my mind, in many instances this is what hides are for, to provide you and your subject with a point of predictability. They learn that whatever is going on there is okay, so long as it’s there and only there. Let’s not forget that although the vast majority of animals might not be as bright as us, they are a damn sight sharper, and if you think that they can’t hear, see or smell you… then you should show some respect for their senses. Of course there are instances where remaining truly hidden is essential; one whiff, rustle or glimpse of anything human would be a disaster. 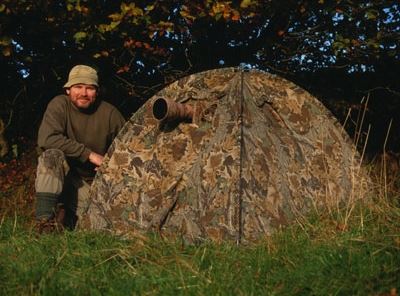 In keeping with the surroundings. Wildlife Watching Mini Dome Hide in Advantage Timber

In the dark old days of the eighties I used a bright blue and orange toilet tent as a hide. I got it at a boot sale for a fiver and never in all its years of use did I ever make any attempt to camouflage it. And the subjects never cared one iota. Sometimes I’d get it in on a nest in a day, several moves over a few hours depending on the species, the stage in its breeding cycle and the individual bird’s tolerance, and then get some shots and leave. The fact it was bright blue never mattered. So why are most hides made from fabrics designed to be invisible in the environment where they are to be used? Sadly the answer to this is disappointingly simple… it’s not to hide them from the birds or whatever; it’s to hide them from people. I’ve lost count of the number of hides that I and my colleagues have had stolen. You set them up in the middle of private land, way off any footpath, nowhere near a road, you cover them with bracken, branches, or whatever, and when you come back there is nothing. What do the thieves do with them? Why would you want a hide if you weren’t a photographer? Where are all my hides now? Is there a race of space aliens who beam them up to a distant planet? The last one I lost a couple of years ago, I had left at 2pm and it was gone by 5pm when I returned. There was no one around, so I went to get a Twirl and some Lucozade, listened to the second half on Five Live and returned. I did my usual double-double-take, wandered around trying to pretend to myself that I was in the wrong spot, but no, I’d suffered another “bad hiding”!

Christ this is a loathsome and despicable crime. What the hell do you do? You’re stuffed; in a wood, miles from home, with all your gear, all excited and ready to go… home. A hanging offence I’d say. Still, my current two hides have been well used and are still in my cupboard. I think.

Now some of you resourceful types will be saying “Aw shut-up, get some tarpaulin, some string and build your own, use natural materials.” Sorry, sometimes such ‘stuff’ is not available and besides – and more importantly – normally you want to get your hide up as quick as possible and get out, not be messing around with twine, twigs and a blunt pen-knife, and that’s the first department that purpose build modern hides deal with. 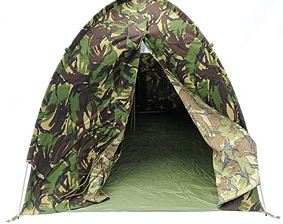 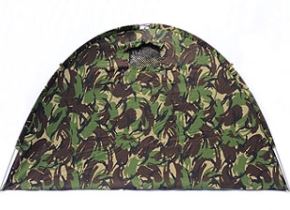 I already have a Wildlife Watching Supplies hide which I have been using for some time, so now to this hide, the Wildlife Watching Mini Dome Hide. Firstly this hide is very light – all in at just over 3kgs, which means it won’t break your back or the bloody excess baggage bill at the airport. Secondly, it’s really well made from good quality materials, so you would have to really try in order to trash it. The aluminium poles and pegs are far better than your average tent/hide gear, which is good because if they break or bend you’re into cobbling about and for your money and the trouble you don’t want to be. It’s free standing which is really useful when it comes to edging the whole thing forward on a subject, if the terrain allows, but I personally would always finally tether it using the guy ropes because wind-free days are few and far between, particularly in Blighty. The groundsheet can be useful when its wet, if you are going to kneel (for extra special pain), or sit (for value added discomfort) or whilst you are setting up before you do get comfortable on a stool or the foam cushioning you’ve carried to prevent screaming cramp. Not. Look you’re not going to get into a tiny camouflaged tent for a relaxing time unless you’re a pervert – you’re here to work, to get a result and this little baby will help you as best it can. It’s not spacious, but it’s not meant to be. You couldn’t swing a 600mm around without concussing yourself, but one person can get in and there’s enough room to mess with your gear if you haven’t brought everything with you.

Every time I do a review I end up giving ten out of ten, eleven even. You are all going to think I’m really soft - too kind to say its rubbish, or it’s pants or burn it. But I’m not, I’m the most critical bastard on earth. Nothing is ever right for me; there’s always something wrong. None of my girlfriends has ever really enjoyed eating out with me because the threat of a ‘scene’ in the restaurant has been too much to bear. Even James, my arch-moaning-mate thinks I should be a bit more tolerant. No chance, but I’m giving the hide a 9.9 and only because it didn’t come with a flat screen TV and Sky!

Build Quality 9
Usability 9
Would I buy it myselfness 10