Keats’ ‘season of mists and mellow fruitfulness’ is upon us, and with its glorious cascades of colour, autumn must rank as one of the best times to shoot the British landscape. It’s certainly one of my favourites, and over the years I’ve found lots of superb locations for capturing brilliant autumn colours. Here are my top ten, with some useful tips to make sure you come away with some stunning images. 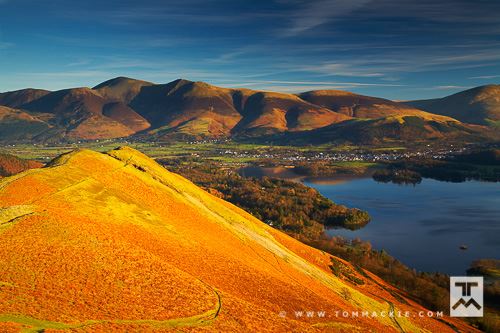 The Lake District is probably the favourite place for many landscape photographers and when the leaves start to change it attracts them like a magnet. I’ve been going to the Lakes every year for the best part of three decades and have found that, depending on how the weather patterns are, colours tend to peak between the last week in October and the first week in November.

They can vary dramatically in different parts of the Lakes as well. My favourite area is around Keswick in the northern part of the Lake District. It has so much to offer, with tranquil lakes, easy mountains to climb with gorgeous 360° views, waterfalls and woodlands. If the weather is clear, I tend to head high to one of the mountaintops such as Catbells to capture the russet-coloured bracken sloping down towards Derwent Water.

The Lake District wouldn’t be the same without inclement weather, but this doesn’t mean you have to stay next to an open fire in your hotel (tempting though that may be!). An overcast sky is perfect for capturing the golden tones of the woodlands, as it acts as a huge diffuser, cutting the contrast and enabling you to record all of the details in the trees.

With over 14,000 trees across its stunning 300 acres, Kew transforms each autumn into spectacular displays of deep reds, yellows and burnt oranges that will keep any photographer busy. For a different angle, try the 18m-high Xstrata Treetop Walkway for brilliant views across the treetops with the city skyline. And remember to pay a visit to the greenhouses, too, as they contain some of the most interesting plant specimens, including the smallest trees in autumn splendour in the Bonsai House.

Located off the A433 near Tetbury in Gloucestershire, Westonbirt Arboretum is one of the best places in the world to photograph autumn maple trees outside of New England in the States. It has around 2,000 specimens and 300 cultivars, and the Acer walk is ablaze with reds and yellows around the last week in October.

A word of advice – don’t visit on a weekend if you plan to do any photography, as the number of visitors is astounding. If you want virtually tourist-free shots then go mid-week and try to get there when they open at 9am. If the sun is shining, make it work for you by placing it behind a branch to backlight the red maple leaves as I did in the image above. I used a wideangle lens to take in the fallen leaves as well as the structure of the tree.

You could easily drive past this on the A9 heading to Aviemore or get sidetracked by the shops, galleries and restaurant at the House of Bruar, but, if you walk behind the complex there is a path that takes you up the glen to a beautiful mixture of deciduous trees and conifers with waterfalls along the way. At the end of the glen you’ll find the Falls of Bruar that drop about 60m. The peak time for colour tends to be the first week in November, and the glen is best photographed in misty or overcast conditions to bring out all the fine details between the green mossy rocks and brilliant colours of the oak, beech and ash trees.

The Birks of Aberfeldy in Autumn, Aberfeldy, Tayside Region, Scotland

The Tayside Region probably has the best display of autumn colours in Scotland. One of my favourite places is the Birks of Aberfeldy, located off the A826 just south of the town. There is a two-mile circular walk that takes you past beautiful cascading waterfalls surrounded by beech trees. Robert Burns wrote a song about the Birks of Aberfeldy and his statue can be seen along the walk.

At the end of the gorge you’ll find the dramatic Falls of Moness, but there are several other waterfalls to photograph, too. Oddly enough, the best autumn beech trees are located at the car park, so you don’t have to venture very far to capture the stunning colours, though I’d definitely recommend doing the circular walk. Another great location not far from Aberfeldy is Glen Lyon.

Stourhead Gardens, just off the B3092 at Stourton in Wiltshire, is also owned by the National Trust. The gardens have a large lake surrounded by a Palladian bridge, grottos, temples and brilliant autumn trees. I would recommend arriving when the gardens open at 9am to capture the perfect reflections before too many tourists arrive.

Because most of the features are quite exposed, it would be best to have good weather conditions for your visit rather than grey skies reflecting in the lake. With blue skies, the autumn foliage will have highlights that can be removed by using a polarising filter. This will deepen the blue skies and increase the saturation of the red and golden hues. For maximum effect, have the sun at a 90° angle to your camera.

Located off the A275 near Uckfield in East Sussex, Sheffield Park and Garden offers 265 acres of rare trees and shrubs reflecting in four lakes. The garden was designed in the 18th century by Capability Brown and contains many photogenic features such as cascading waterfalls and bridges. It’s managed by the National Trust and is open from dawn to dusk.

There are so many great autumn locations to photograph in North Wales that if you base yourself either in Llanwrst or Betws-y-Coed you can’t go wrong. Bodnant Gardens is one place that is definitely worth a visit. Just north of Llanwrst on the A470, it’s right on the River Conwy with stunning views across to Snowdonia and an impressive acer grove that is a carpet of red at the peak of autumn. The best time to go is mid-October.

The New Forest National Park contains mainly oak, birch and beech trees in a 219-square mile area and in the autumn this transforms into a blaze of colour. It was created as a royal forest by William I in about 1079 for hunting deer and in 1698 common rights were confirmed so that the ‘commoners' could use the area to graze their livestock. This ancient right is still prevalent, as you will see ponies and cattle grazing freely throughout the forest. Early mornings in the forest are great for capturing sunlight streaming through the mist. Try shooting the sun just peering out from behind a branch or tree using a small aperture such as f/22 to create a sunburst.

Ashridge Forest has 5,000 acres of oak and beech trees that span the borders of the counties of Buckinghamshire and Hertfordshire. It’s managed by the National Trust, but is free to explore. There is a café for drinks and cakes located off the B4506. With such a vast area to explore, it’s hard to know where to go first. There are a couple of woods that I have found to be particularly good for colour – Thunderdell Wood and Dockey Wood – and they’re both easy to access, with nearby car parks and footpaths winding though golden trees.

Tom Mackie is recognised as one of the world’s finest landscape photographers, his understanding of light, perspective and colour; the hallmark that has established his name both internationally and here in the UK. He has written several books and regularly contributes to a number of photography magazines. You can view more of his work on his website.