In the second part of this series about using flash outside for portraits, Richard Sibley from AP explains how to create bright and dramatic images.

How to create bright and dramatic images

In the first part of this article, Fill-in flash for portraits, Part 1, I looked at the benefits of using a touch of flash outside in daylight to brighten up portraits. The technique has a number of benefits, including adding an attractive catchlight to a subject’s eyes, helping to smooth skin by lighting it evenly and, most importantly, reducing shadows on the subject’s face.

However, this can be taken a step further. Rather than merely using a flash to complement light from the sun, you can use a flash to beat the sunlight, making the flash the dominant light in the scene. 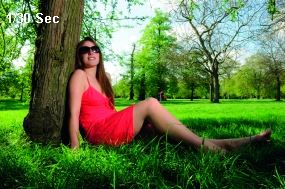 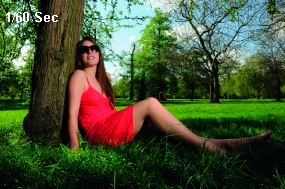 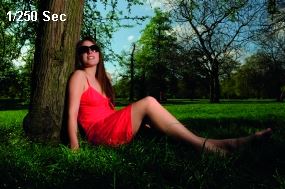 To do this, you need a camera with a fairly fast flash sync speed. Thankfully, most digital SLRs can sync at a speed of 1/250sec, and some are even faster than this. The aim is to underexpose the scene, causing the subject to be in almost complete shadow, but then to use a flash to illuminate the subject to create studio-style lighting outside.

You may think you need a powerful studio flash to illuminate subjects outside, and while this is certainly an advantage, it should be noted that all the shots seen here were taken using Nikon SB-600 Speedlights.

Using the sun
No matter how far the lens aperture is stopped down, you will find it difficult to darken the sun completely. Instead, you can use it to your advantage.
When taking portraits in the studio, it is advantageous to use a light behind the subject, above his or her head, as a ‘hairlight’. This adds highlights to a subject’s hair, to make it stand out from the background.
When shooting outside, place the subject directly in front of the sun and use it as if it was a hairlight, as I have done in the image on the previous page.

The location you choose to take your images in is important. While you can use the technique anywhere, finding a shady location with a bright background works well. This allows for your subject to be in shadow, meaning that little ambient light will fall on to him or her during the exposure.

As the technique has the effect of darkening backgrounds, it can work well on overcast days to make dramatic, cloudy skies. Equally, on a bright sunny day it can make the sky a very deep blue. Overall, it creates an effect very reminiscent of HDR, as parts of the image normally in shadow are made bright and punchy. 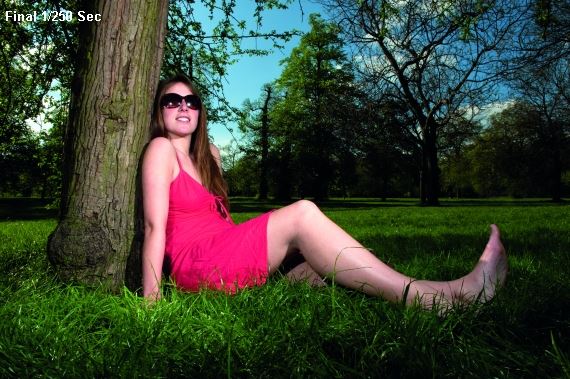 With the aperture set to around f/16 and the sensitivity to ISO 100, altering the shutter speed largely only affects the brightness of the background

Having found an appropriate location, place your subject in the scene and ask them to pose. While you can use a flashgun placed on a camera’s hotshoe, results are better when the flash is mounted off-camera. A wireless flashgun is perfect for this, but equally a long sync lead allows you to use a conventional flashgun with the same results. Using a slave cell may be a good idea if you are shooting a shadow area, but generally they don’t work well, if at all, in bright conditions.

Choose an appropriate angle to light your subject. Generally, you want this to be around 45° to the left or right of him or her. The precise position depends largely on where the ambient light is coming from. Most flashguns come with a small stand that allows the flashgun to be mounted on to a tripod or lighting stand. Alternatively, ask someone to simply hold the flash in the required position.

A wireless flash is perfect for dramatic fill-in flash, but a long sync lead works just as well.

In manual exposure mode, set the cameras ISO sensitivity to ISO 100 and the shutter to the fastest possible flash sync speed, which in most cases is around 1/250sec. Take an exposure reading without firing the flash and adjust the aperture size so that it creates a nice dark sky. In bright light f/16 is a good starting point.

Having taken your test image of the background, set your flash to full power and take another shot. You should find that the flash lights the subject. If the light is too bright, you can turn the power of the flash down or move it away from the subject until you are happy with the result.

Multiple flashguns
Just as when you use a flash in the studio, you may find that your single flashlight creates a harsh shadow. To soften it, simply use another flashgun set to half or even a quarter of the power of the main flash.
For example, if the main flash, or key flash, is on 1?1 power, set the second flash to 1?2 or 1?4 power. If the key flash is set to 1?2 power, set the secondary fill flash to 1?4 or 1?8sec power. This will fill in any shadows. In this image I have used a second flash to help illuminate the trailing leg and the log. 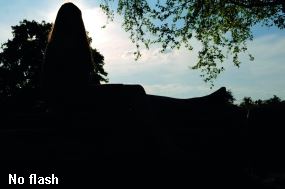 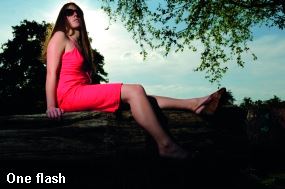 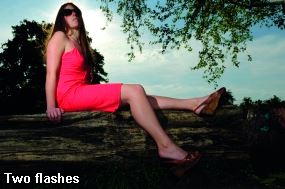 This is Part 2. Read Part 1 of Fill-in Flash for Portraits.