Last week I was lucky enough to attend Going Digital’s Wildlife Photography course at Hamerton Zoo in Huntingdon. I'd love to go on safari in the not-too-distant future, so I thought this course would be great practice…and I wasn’t going to turn down an opportunity to get up close and personal with the tigers! 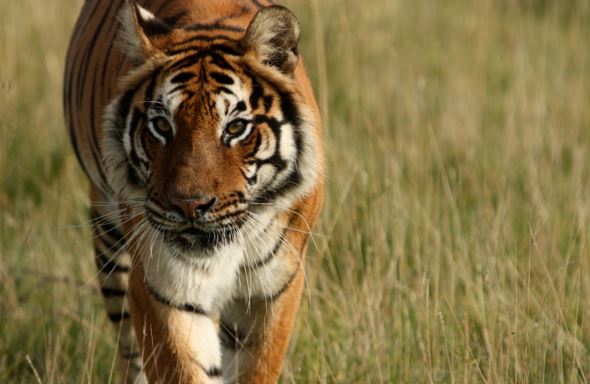 Jan Slack (the founder of Going Digital) and John Wright (a wildlife photographer) are the tutors for the day, which begins with a discussion about wildlife photography with lots of incredible shots shown as examples and inspiration. Important things to remember today include composition, selecting the correct aperture as our shots change from animal portraits to group photos, and adjusting autofocus on-the-go.

One of the best things about the workshop is the opportunity to get a lot closer to the animals than you normally would at a zoo. We’re taken behind the usual barrier and are able to photograph right up at the fence that surrounds the actual enclosure. The gaps in the fence are wide enough that I can fit the Canon EF 70-200mm f2.8 L IS II USM lens that I'm using in between the wires without my view being obstructed.

Our first subjects are the cheetahs, who seem pretty comfortable with us being there. I think they know exactly what a bunch of people with cameras at their fence means - food! The zookeeper who accompanies us throughout the day throws them chunks of meat to keep them close (and happy). The cats are fantastic subjects and I take a bunch of shots and stop to review to make sure I’m happy with all my settings. It all looks good and I keep snapping away, making the most of being so close to these gorgeous animals. I never realized until today that cheetahs have such striking, orange eyes – my goal is to get a decent shot of them before the day is out. 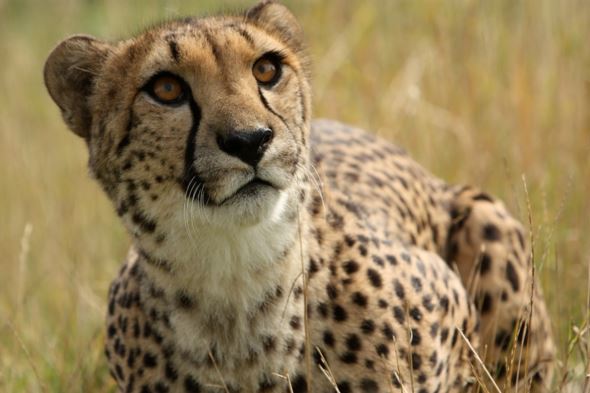 We move on to the Corsac Fox enclosure and photographing these fast little guys is definitely a challenge! They’re small and they don’t seem to stand still for more than a split second, so getting them in the frame is hard enough, let alone composing a great shot. Luckily, I spot a fox that is standing still with his eyes closed and his face up in the air (although worryingly, he is foaming at the mouth slightly). Apparently he’s eaten too quickly and has the hiccups so I take a few shots before he recovers and is off again, happily running around with a full belly no doubt. 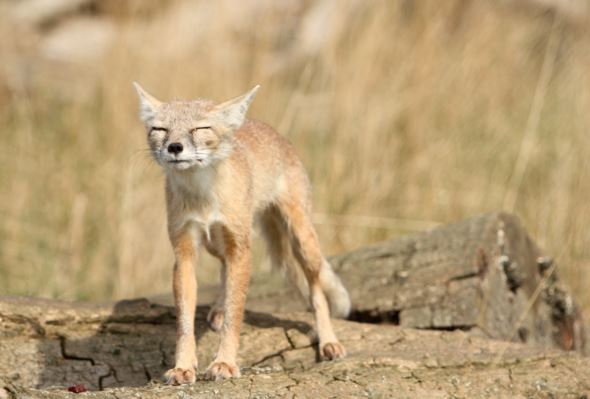 Only a small case of the hiccups

After several hours of photographing cheetahs and foxes, our morning hands-on session comes to an end and we hand in our memory cards and break for lunch. In the meantime, Jan and John load up our photos from the morning and organize a review session. This is a really great chance to go back over what we learned and see our photos on a big screen and out of the direct sunlight. We look at examples where we’ve taken great shots and pick out improvements that could have been made in other photos. When we go out for the afternoon photography session we will have identified mistakes made the first time round and can acknowledge areas to focus on for the afternoon.

I want to concentrate my efforts on composition, as I’ve certainly found it a challenge to re-compose as fast as the animals are moving (which is pretty much all the time), so I need to practice thinking fast, re-composing the frame and moving the AF points as quickly as possible. Although I’m happy with some of the photos I took in the morning, there were a few that could have been great if the top of an ear hadn’t been cut out or if the cheetah was a little to the left or right in the frame. 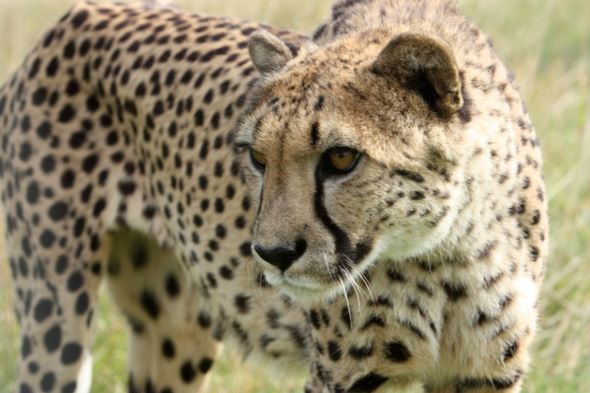 One of my better shots from the morning's session

Our first stop in the afternoon session is at the enclosure where two slightly mischievous tigers live: Lady the Bengal tiger and Blizzard the white Bengal tiger. I’m only slightly nervous when we’re told that they like to jump up at the fence to get a reaction and that we need to keep our fingers, toes and lenses out of the fence if we want to avoid them being scratched (or removed entirely). 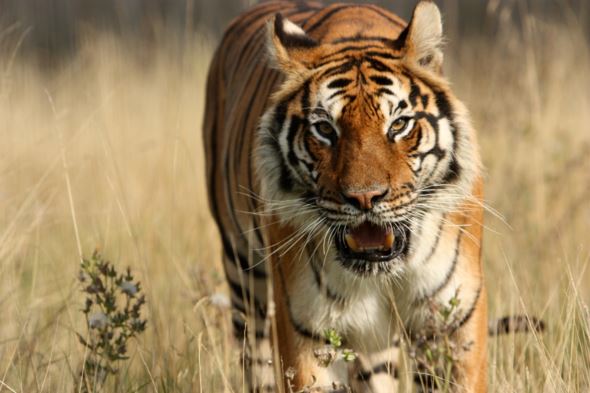 Blizzard and Lady are both absolutely gorgeous and a pleasure to photograph. It’s an amazing experience to be standing so close to them as they brush up against the fence and I start to relax as they both seem to be very well-behaved.

OK, I spoke to soon. As I’m crouching down photographing Lady with my eye to the viewfinder I fail to notice the huge white Bengal tiger approaching before he jumps up at the fence right above me. Obviously I get a huge fright and a small yell escapes my mouth (so much for not reacting!), everyone laughs and I learn my lesson.

As enjoyable as it is being this close to the tigers, photographing them turns out to be rather tricky at times as they like to come right up to the fence fairly often. Since we need to shoot with lenses right up to the wire, and with the widest focal length on my lens at 70mm, they are often too close to get in the frame. Nevertheless, I decide to make do instead of going back to get another lens and I do get a lot of shots I’m happy with - especially once the tigers tire out from running around and start lazing around in the field. It's perfect for snapping a few profile shots. 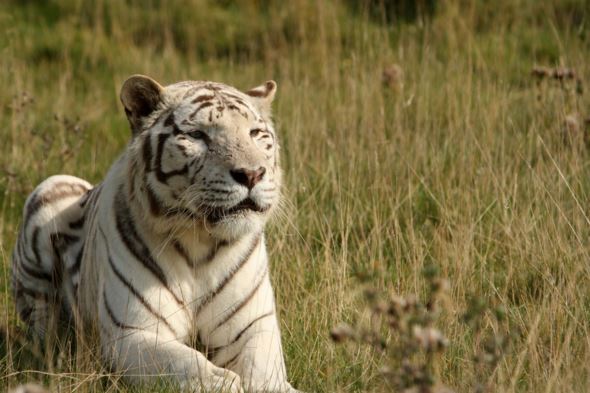 He wasn't so scary after all

We move on from the tigers and get the chance to photograph the Maned Wolves who turn out to be unwilling subjects as it seems they have better things to do in the afternoon (like sleep). Nevermind, we go back to our first subjects, the cheetahs and enjoy the opportunity to photograph them in the glowing evening light.

All in all, it was a fantastic day out and an incredible opportunity to photograph some beautiful animals at very close range. I thoroughly enjoyed the structure of the day and the classroom-based learning was just the right amount – enough to get some guidance in the beginning as well as the valuable review session to ensure the afternoon’s photos were an improvement on the morning’s. I found that we had plenty of time out there photographing the animals – at least 4 hours across the whole day was a great amount.

And just in case you’re wondering, I did get a shot of the cheetah’s eyes that I was happy with, made possible by the ambient evening light. Now I just need to book that safari so I can photograph some animals in the wild. 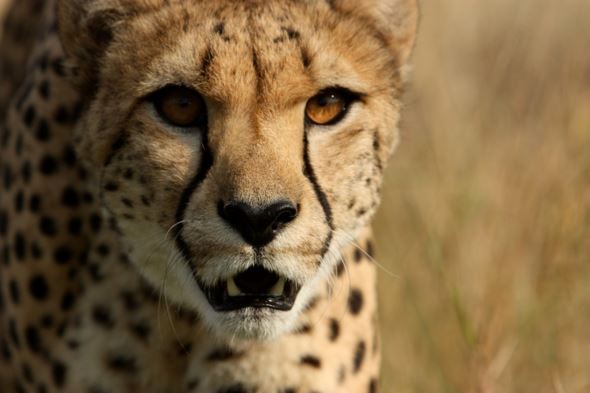 If you'd like to find out more about this workshop, visit the Going Digital site here