I met my photographer chum Chris for a coffee just before Christmas and we chatted about all things photographic. Chris had had a good year winning a couple of competitions for his commercial and architectural work, two of his favourite subjects. However our conversations always come round to portraiture and especially Hi Key stuff, as Hi Key is still so popular and I get a huge number of emails asking how to do it. Chris and I both agreed however, that Hi Key is not the answer to everything.

I guess we both sounded like old gits, but Hi Key does have its limitations, for example, what about photographing older people? Hi Key is great for kids, grumpy teenagers and young families, but it doesn’t really suit older people, it doesn’t really do them justice. We agreed that black and white is a much better medium to bring out the best in people my age.

So then we started looking at images on our iPhones to prove the point. We ended up looking at the classic portrait of Ernest Hemingway taken by the Canadian photographer Yousef Karsh, surely one of the best portraits ever taken.

The portrait was taken in 1957 and can be seen in both black and white and slightly tinted. Either way it’s a cracking portrait.

Chris said that he would like to try to take a similar portrait to prove it can still be done, so we agreed to meet after Christmas at his studio and have a go. “To make it more interesting” he asked me to let my beard grow a little longer...

As planned we got together on a very cold day in January to take my portrait (with a longer beard) in the style of Karsh’s Hemingway. Like Hemingway, I didn’t dress up for the sitting, just wore an old top.

Chris and I had already talked about the lighting set up and we had agreed to use a combination of snoots or grid reflectors with honeycombs. Chris started by putting a Bowens 500DX on a boom arm to shoot downwards towards my face, fitted with a Softlite reflector with the diffuser and honeycomb attachment. We added another two Bowens 250DX heads on stands behind me to light either side of my head, one 250 with Snoot and the other head with a Grid reflector and small size honeycomb.

These accessories are great for low key work, restricting and compressing the light into small and controllable areas. Karsh would have used tungsten lights with similar accessories rather than flash, but as I said, we weren’t trying to copy the Hemingway shot, just to capture the spirit of the original.

After some trial and error, mostly regarding getting the angles and power settings of the heads right, Chris added a large white reflector panel just in front of me to my right hand side. This helped with the overall lighting. Chris shot me with his favourite 85mm lens on his Nikon D3 at around f4 at 100asa.

The initial results were pretty good, even Chris seemed pleased which is surprising as he’s such a perfectionist! However the overhead light wasn’t creating quite the effect we had hoped for, so we swapped the Softlite fitted with the diffuser for another Snoot with a honeycomb. This made a lot of difference to the main overhead light and gave a much better effect. It narrowed the light and compressed it into a much smaller area.

I’m never comfortable in front of the lights and after a while I kept blinking when the flash went off. I don’t know how models manage to stand in front of lights all day long and still look so cool and composed, it’s a real skill, believe me! Anyway after a few ‘blinks’ we managed to capture some good poses. Mind you, I did have a few problems smiling without looking stupid!

After shooting 30 or 40 shots we downloaded them onto Chris’s computer and they looked really promising, even without any of Chris’s Photoshop wizardry. Chris changed the images into B&W on his Capture One software so that we could really see the comparison to the Karsh shot. The result? Not bad at all. We decided to select 2 or 3 images to work on and show another 2 or 3 images without any Photoshop work, even Karsh did quite a bit of retouching in the darkroom, so as Chris said “we ought to give them a little tweak”. Chris used various tools to reduce and enhance areas of the portrait and give them a very slight tint.

So here are three of the original images that haven’t been touched, apart from making the images B&W. As you can see without any retouching and straight out of the camera they look pretty good. 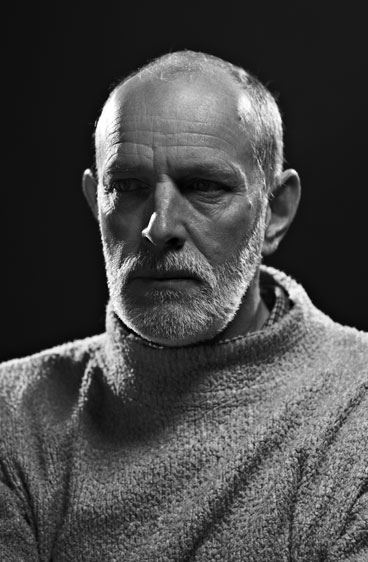 These next two images were taken using the Snoot with a Honeycomb: 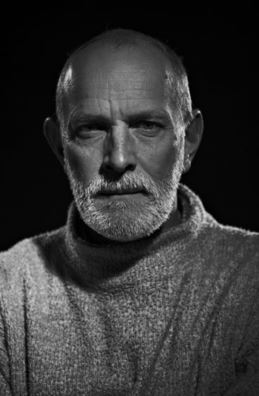 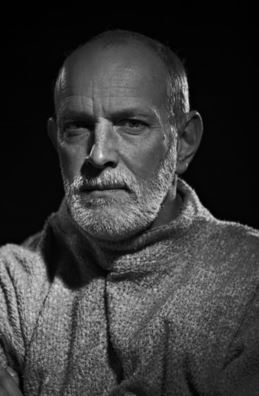 The retouched versions are more interesting and nearer the original Karsh image of Hemingway: 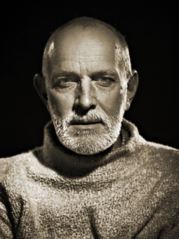 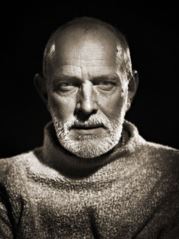 I hope you like these images, and agree that using this Low Key method can create a great portrait. I would much rather have this portrait of me hanging on the wall than some over lit bland Hi Key image that really doesn’t say anything about who I am.

So if you have a dad, an uncle or a grandad who is willing to sit for you, why don't you try a bit of Low Key work? Believe me, it is so rewarding. As usual, if you have any questions about Low Key or the accessories that we used, drop me an email.

My thanks to Chris Reeve of Reevebanks Photography. For more information about Yousef Karsh, go to Wikipedia / Google Images and type in Yousef Karsh.