In the first of a two-part series on painting with light, Richard Sibley from AP explains how to use the night as a blank canvas, while armed only with a flashgun.

The word ‘photography’ has Greek origins and means ‘a light paintbrush’ or ‘painting with light’. This meaning is sometimes overlooked, as we tend to think we are capturing a moment or an emotion in time. But in the end, it all boils down to harnessing rays of the visible spectrum to create an image. More often than not we rely on the natural or ambient light to illuminate a scene, but in fact we have many tools available to us with which we can manipulate light as we see fit.

Night provides us with a perfectly blank canvas, and by using a flashgun we can choose which parts of a scene to reveal to the viewer and which to keep hidden in the darkness. The image below was taken in a park at night, and it took a few attempts before I was happy with the result. This is largely because of the nature of the lighting, and it can take some time to work out how much light each part of the scene will need.

Using the night as a blank canvas

I placed a Nikon D300 on a tripod and set the camera to a 30sec exposure at f/8, with a sensitivity of ISO 400. Then, using a Nikon SB-800 Speedlight (attached to a Quantum Turbo 2x2 battery pack for fast recharging) and an SB-600 Speedlight, I went around the scene lighting the subject in the foreground and the trees in the background.

Night provides us with a perfectly blank canvas and, by using a flashgun, we can choose which parts to reveal and which to keep hidden.

My first port of call was to measure the ambient light. A 30sec exposure turned the sky a deep amber colour, due to the town lights a few miles away. It was also enough time for me to run around lighting the scene. Rather than setting the flash to full power, I instead chose to set the flashguns on 1?8 power. This allows more flexibility when filling in areas with light; they can be made more, or less, dramatic by firing multiple times. Using the flashgun’s GN, I calculated how many flashes were needed to light each area. Lighting the subject and foreground took five flashes. A further two were used to light up the picnic bench in the background. The main silver birch tree took around seven flashes, and the trees to the left around four. A few more, to add a little light to the ground, were fired as I ran quickly between the locations.

The light on the subject was from about 45° and slightly above head height of the subject. A couple of flashes were used to fill in the front and foreground. I then rushed to light up the silver birch trees in the background. With only 30 seconds to run and light each location I had to be extremely quick, and some of the results simply didn’t work out. 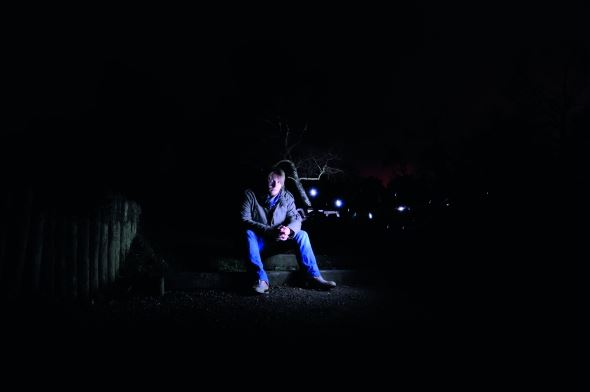 This is an early attempt where I was trying to work out how to light the subject. On the right-hand side you can see bright highlights where the flash has been fired. The trick is to shield the flash behind your body so that the flashes remain hidden from the camera.

When I was happy with the shot, all that was left to do was adjust the WB of the image to balance the colour of the flash and ambient light. Finally, I cropped the image to a 16:9 ratio to give it the look of a film still. 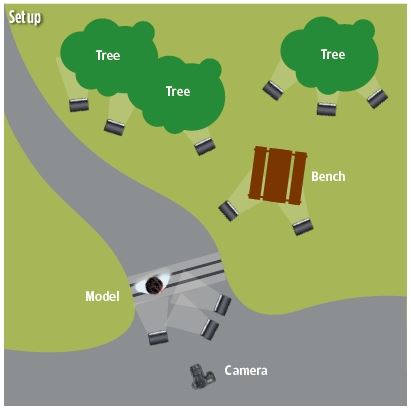 Above is a plan diagram of the locations at which I fired the flash. Sometimes I fired it multiple times at the same location when more brightness was needed, or to light the trees from higher up