A Day at the Races

The 10 and 11th April 2010 brought around the opening round of the British downhill series at Rheola in South Wales. This is the premium national race series for downhill mountain biking in the UK and this year the event has seen a total facelift and the re-branding of the series, which is noticeable the second you arrive. It was more like a world cup than any other UK race I have been to, and I knew that covering it would be more of a challenge than your usual UK race - I was right. 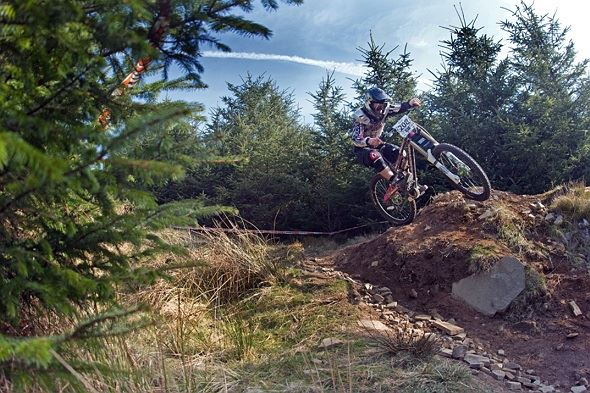 With more riders, more photographers (competition) on the hill and longer days, it took some planning to get all the shots I wanted. A rare thing for the UK and especially Wales, the weather was stunning with not a cloud in the sky, so I was more worried about sunburn than water damage, but this gave both good and bad points.

Yes there was no rain to get in the way, but the sun gave very harsh shadows in the woods and in anything other than the darkest parts, flashes were very hard to use. Lighting is the key to good photography, so having a controllable light source is best – with no chance of overpowering the sun out in the open, you're stuck with the big flash in the sky. 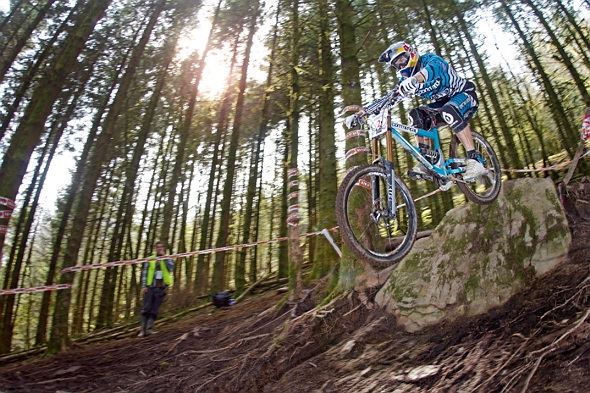 World pro and eventual winner of the race, Gee Atherton, in the woods

The challenges in shooting any sport and especially ones in such unforgiving places like mountains, are weather, light, the riders, gear not working and of course, your alertness.

That last one may sound a bit silly, but when you have to be on the hill by 7 or 8am for the first riders, don't get down until 5-6pm and then have to stay up late editing photos for clients and don't get to bed till after midnight, getting a good night's sleep and planning and packing for the day ahead is key.

The weather isn't something you can control, but there are a lot of things you can do to deal with it. As the weather at this event was good, sun cream and a hat are very important. In terms of shooting in the harsh sun, it's all about working with what angles the light allows you to shoot and not what features you think may look best. To shoot the best features of a track, you might have to think a bit harder about angles and the possibility of external lighting.

With my camera, a Nikon D90, the max flash sync speed is only 1/200th and so shooting with flash out in open sun means ISO 100, and F stops of 10 plus. Neither of those figures is good for making flashes stand out. To get round this I had to use two flashes in the same place pointing at the same point on the track on half power (not full as it's too slow a recharge time and eats batteries) and zoomed in to about 50mm. This gave a nice even flash / ambient balance, not managing to overpower the sun. In the woods this isn’t a problem and you can shoot as you normally would in darker places; slow shutter, flash to freeze rider etc all work well. 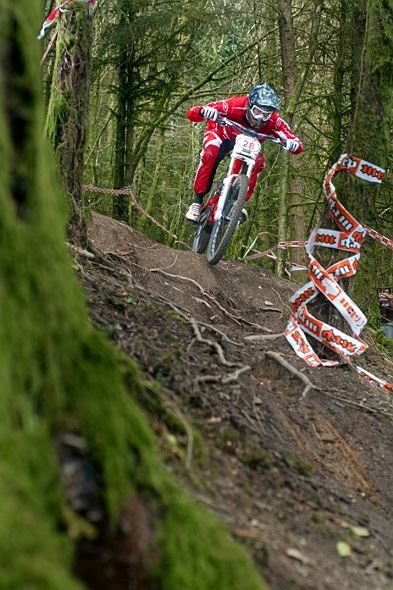 In the woods. I love the red kit against the green of the trees

Planning on who to shoot and who you can miss is also another important part. This is where knowing who is taking part and having a bit of knowledge about the people tipped for the win is good. An idea of the top five favourites gives you a good idea of who you need to make sure you cover. If you shot every single person that came past, a) you would need to change batteries and cards once every few hours, and b) you would be sitting at your PC for a week looking thought the 10,000+ photos for the few good ones of the people who did well. Selective shooting is a must if speedy work flow and turnaround is important!

So if you want to get out and shoot some outdoor sports or cycling, I would say first of all to make sure you have a good bag. Lowepro, F-stop and Tamrac all do bags that are great for hiking about with lots of camera gear. Being on your feet with all your gear for 12 hours takes its toll on you even with a good quality bag, so it's best to be as well prepared as possible. Secondly, as mentioned, get some rest before and in between shoots. If you're away for more than one day, get a B&B. It might seem like an unnecessary cost, but the quality of your shots will be better than if you tire yourself out by driving for hours either side of every day of shooting. 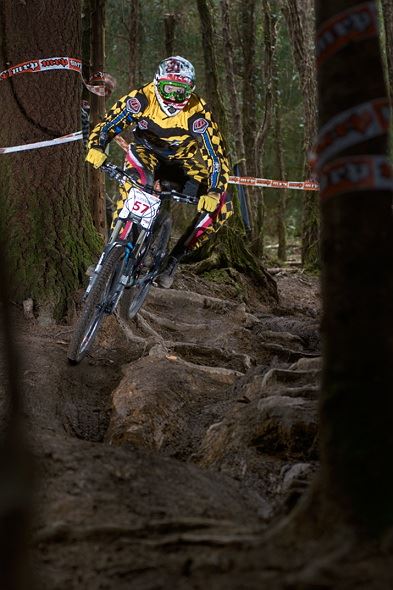 Lastly, my top tip for getting the shot is pre-focusing. Unless you’re using the top of the range cameras, the chance of your auto focus keeping track of the best guys in the world is slim, so pre-focus. With bikes they often have a very specific path that you know they are going to follow, so pick the spot where you think they will look good (in a turn, or a jump etc.) and focus on that. Flick the lens to manual so as not to change it, and when the rider passes that spot, click! 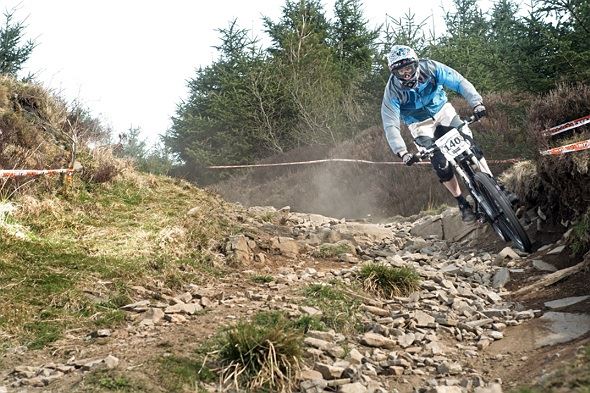 Adam Price in the rocks at the top of the track

That’s all for now, I will be at the next round of the BDS and will post some more of my favourite images and a bit more about them here.