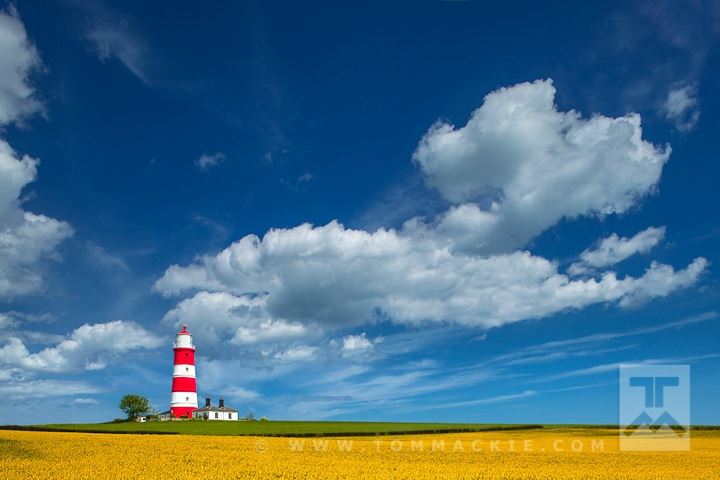 Lighthouses conjure up all sorts of mysterious or romantic notions. Thoughts of a solitary sentinel watching over a rocky coastline with a brooding, stormy, sky is like a setting from the film Shutter Island. Some lighthouses are tourist destinations in their own right and make ideal subjects for photographers.

I am lucky to have Happisburgh Lighthouse, pronounced HAYZ BRU, on my doorstep here in Norfolk. It is the only independently run lighthouse in Great Britain and has featured in the ITV series, Kingdom and Ellie Gouding’s music video, Lights. From a photographer’s point of view, the red bands make it a perfect colour feature. In the image above, the sky plays an important role with the clouds acting as a guiding element to the lighthouse. A plain, blue sky would have had a weaker compositional effect. By utilising strong primary colours of red, green and blue with a splash of yellow as a subtractive colour, this colour combination creates an image with powerful, visual impact.

The usage of colour can help to evoke a mood and in this next image I am relying on the soft, subdued colour of the dawn light to create a tranquil mood. I have photographed Nubble Head Lighthouse on the coast of Maine many times, but on this occasion I wanted to make an image with a difference. I decided to do a 4-image stitch panoramic at sunrise using a Lee 10x ND Big Stopper to smooth the water and get some movement in the clouds. This entailed calculating each exposure of 2 minutes to arrive at the final exposure just as the sun broke over the island. I do like a challenge. Using my Flight Logistics sunrise/sunset calculator I knew exactly where the sun would rise, so I allowed a few minutes for the sun to come up from the horizon to the top of the right hand side of the island. Counting back from this point in time I started my exposures. By the time I was exposing my third frame, the sun started to appear over the island. I overlapped each frame by one third to give ample stitching leeway. After the final exposure I wondered if I captured the necessary information to make the panoramic.

The beauty of using the Big Stopper is similar to the feeling of getting transparencies back from the lab and putting them on the light table for the first time. The anticipation of seeing the results of a technique that is difficult to previsualise is exciting. This provoked some questions though. Would the clouds move enough in the right direction to add to the overall composition? Did I capture the sun before it started to flare into the lens? Would the water have the right amount of movement to create the right atmosphere and most importantly would all of the images stitch together without too much difficulty? As I looked back through the images on the display, I smiled confidently knowing that I not only captured something substantially different from my other images of Nubble Lighthouse, but I have also made an image that is significantly different from other images that I have seen of this frequently photographed lighthouse. 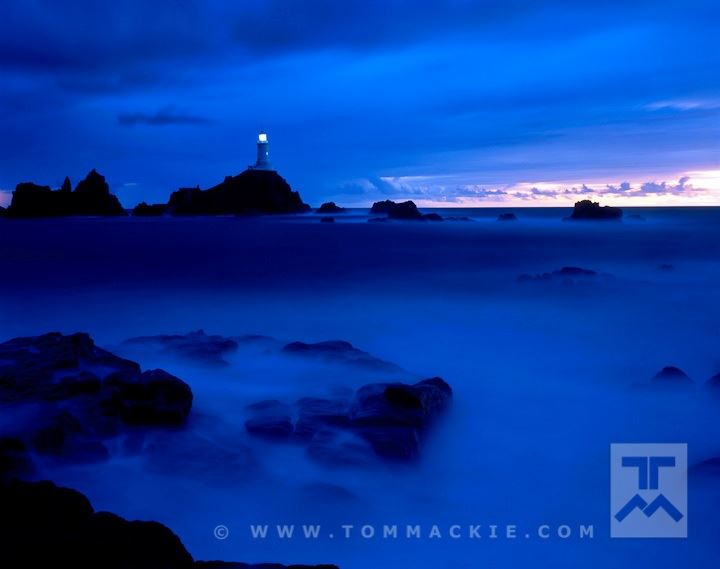 In recent years the popularity of the Lee filter, The Big Stopper, has seen this effect published across all of the photographic magazines. But achieving this effect is nothing new and can be created under the right lighting conditions. I made this image of Corbiere Lighthouse on a 4×5 large format camera using Fuji Velvia film back in 1991. It wasn’t an evening that brought out many tourists to see the famous lighthouse, in fact, the conditions were so bad that I was the only one there. The sky was full of storm clouds and the waves were crashing against the rocks below me. It was perfect. These were the sorts of conditions that could produce dramatic results, which was dependant on me preventing the camera from blowing over! The light levels were so low that I was into the 2-minute exposure range so I shielded the camera with my body and made several exposures just to increase my chances of getting a sharp one. No filtration was used, just the natural light and blue colour temperature of the late evening storm. I recall receiving the results back from the lab and a smile appearing across my face.

Tom Mackie is recognised as one of the world’s finest landscape photographers, his understanding of light, perspective and colour; the hallmark that has established his name both internationally and here in the UK. He has written several books and regularly contributes to Photography Monthly and Amateur Photographer Magazines, and will be sharing regular updates on his latest photographic adventures on the Wex Blog too.

You can view more of his work at www.tommackie.com