The night sky – what to shoot over the next few months

What astronomical events could you capture? Here’s our guide to the night sky, what to shoot and how to shoot it 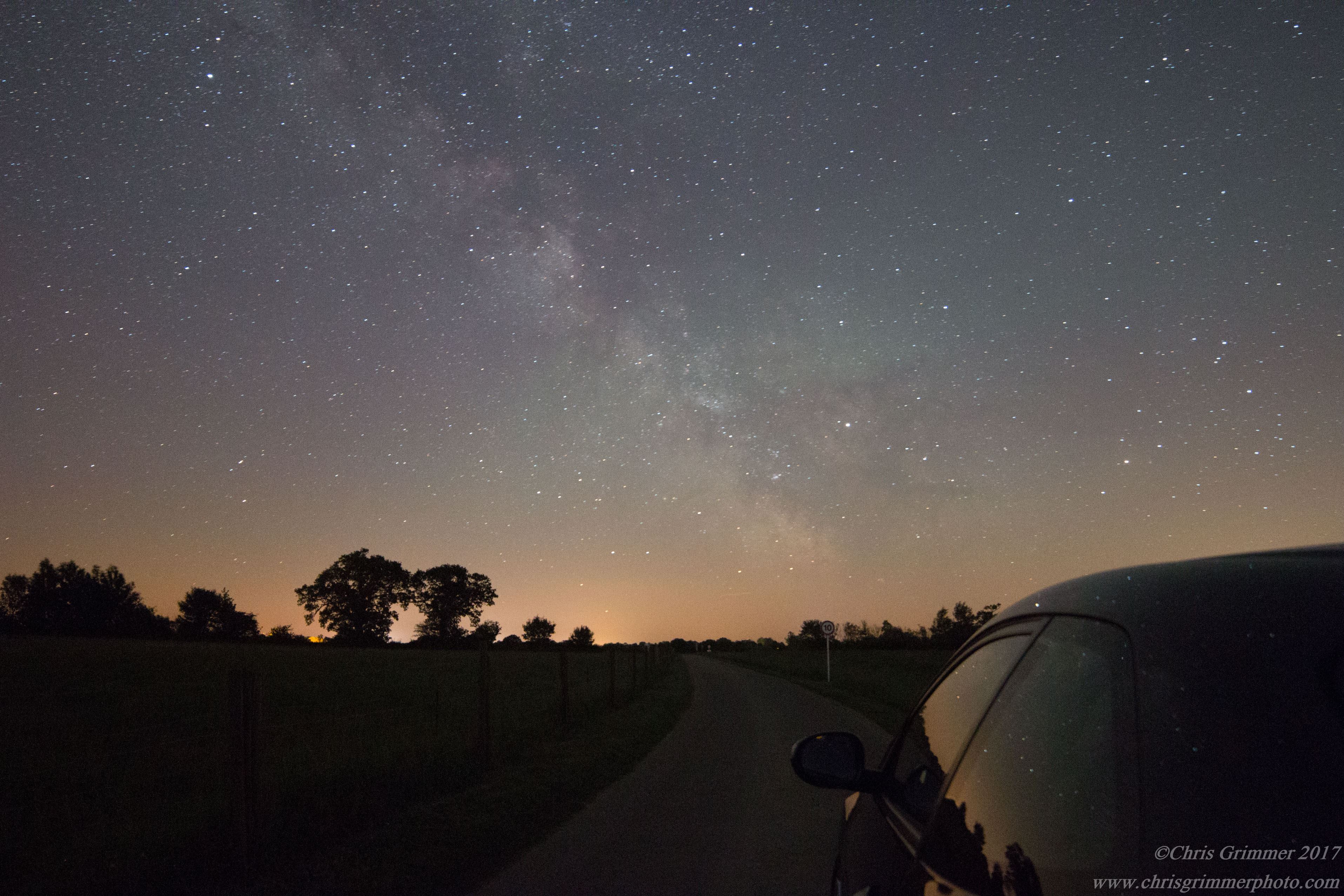 All images by Chris Grimmer

There has been a lot in the press recently about astronomical events, from supermoons to meteor showers. While these events are brilliant to witness, as photographers we want to capture the moment on camera. The good news is that the majority of these events are possible to photograph with a modest camera setup.

While normal daily activities are temporarily limited, enjoying the night sky is a welcome distraction and can be done from your own garden, balcony or even through a window. While having access to a dark site free from light pollution will greatly increase what can be seen, there is still plenty we can do even from a bright, light-polluted city centre.

There are many events occurring over the next few months, the majority of which won’t be affected by light pollution. Below are some of the main events and tips on how to photograph them.

The term “supermoon” has been used a lot in the press of late, but what exactly is it?

The moon orbits the Earth every 27.3 days, but its orbit is “elliptical” or oval. This results in the moon approaching closer to the Earth at certain points in its orbit (Perigee) and further away at others (Apogee). If the moon’s closest approach coincides with a full moon, then this is referred to as a “supermoon”. While the difference is around 21,000 miles, this only alters the apparent size of the moon by around 6%.

The key to making the moon look larger than normal is using perspective to your advantage. While we may not be able to head to our favourite location, you can still use local scenery to your advantage, even if this is an urban or industrial landscape. The moon rises at 8:17PM on May 8th, so will still be low in the sky as the sun is setting – giving you a good balance of light foreground without overexposing the moon.

Regarding a lens, use the longest focal length you can, and select as distant a foreground object as possible. This will cause the moon to appear larger in comparison to the foreground object. Try keeping your aperture narrow, within the f/11 to f/20 range, to give you the best chance of keeping the moon and foreground sharp and focused. Keep your ISO low, as you will need to adjust the images in post-processing, which will increase noise in the image. This may result in a slow shutter speed, so a sturdy tripod will come in handy.

Once you have your images, the chances are you will need to do some post-processing to lighten the foreground and potentially add some contrast to the moon.

It is not just the supermoon that you can photograph. If you own a lens with focal length of 400mm or more, then with the help of a tripod you can get some close-up shots and start to show some of the moon’s cratered surface. These shots work best in the run-up to the full moon, as the details you are after will show best along the ‘terminator’ or shadow line. Due to the light coming in at a shallow angle, it casts long shadows and gives real depth to the detail.

Meteor showers are amazing to witness, but frustrating to catch. A lot of meteor showers are faint and the only thing you see is a hint of a shooting star in at the corner of your eye, which has gone by the time you turn your head. The showers in May and June will be faint and difficult to see – however, the Perseids can put on a really good show.

Location is important for meteor showers, and finding a dark area away from light is crucial. A camera is a lot more sensitive to stray light that the human eye, and will pick up street lighting from miles away. Therefore the further you can get away from cities and towns, the better. While movement restrictions apply, this will make a meteor shower a difficult subject if you don’t live rurally, but there is still a chance you could pick up the bigger, brighter meteors even from light-polluted areas. 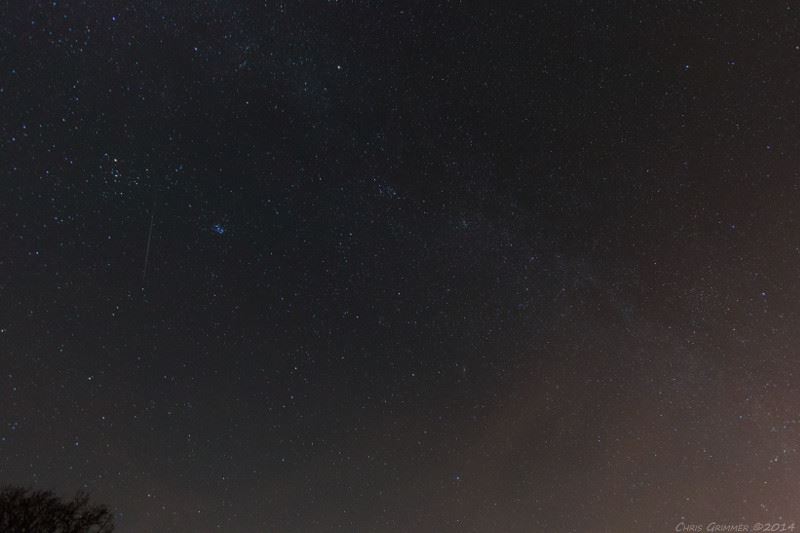 Keep a close eye on the weather, as clear skies are essential. My favourite app is “Clear Outside”, as well as the website YR.no, which is a Norwegian weather site that is usually very reliable. Sat 24 is good for satellite maps showing cloud cover, as you may spot a clear patch and then head to that location to give yourself the best chance.

For capturing meteors, set your camera up on a fixed tripod, pick an area of sky in the direction that the meteors will be coming from, then use a remote shutter release to set your camera running continuously. The settings you require are very camera-dependent, but a good starting point would be as follows:

Tip: The 500 Rule goes as follows: “500 Divided by the Focal Length of Your Lens = The Longest Exposure in Seconds Before Stars Start to Trail.” (Remember to multiply your focal length by 1.5/1.6 for crop sensors).

Tip: Autofocus is useless at night, so get used to using manual focus. Most lenses will show “infinity” on the focusing ring, however this will not give perfect focus. If your camera has Live View, aim at a bright star, push your ISO high and use the zoom function on your LCD screen to get in close to a bright star. Now adjust the focus until the star appears as small as possible.

Star-trails are achievable for everyone no matter what level of camera equipment you own; they can even be captured with modern smartphones. Light pollution does not restrict your ability to do shoot star-trails – this image was taken from my city-centre garden that is surrounded by street lighting. These trails required 30 minutes’ imaging time. 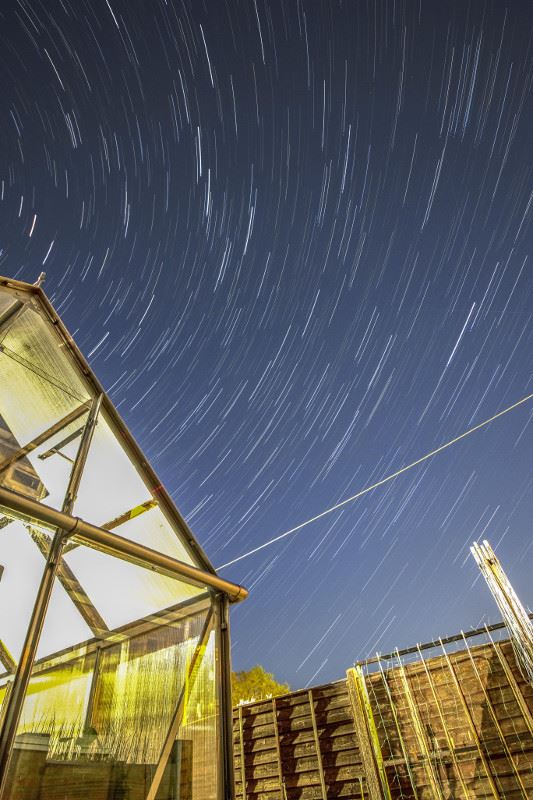 In a star-trails image, we are capturing the rotation of the Earth; the stars themselves are not moving but we are. This is why the night sky as we view it appears to move, rotating around a fixed point next to the pole star. This is the reason why astronomers and astrophotographers use tracking mounts, which counteract this constant movement and fix the stars in position. 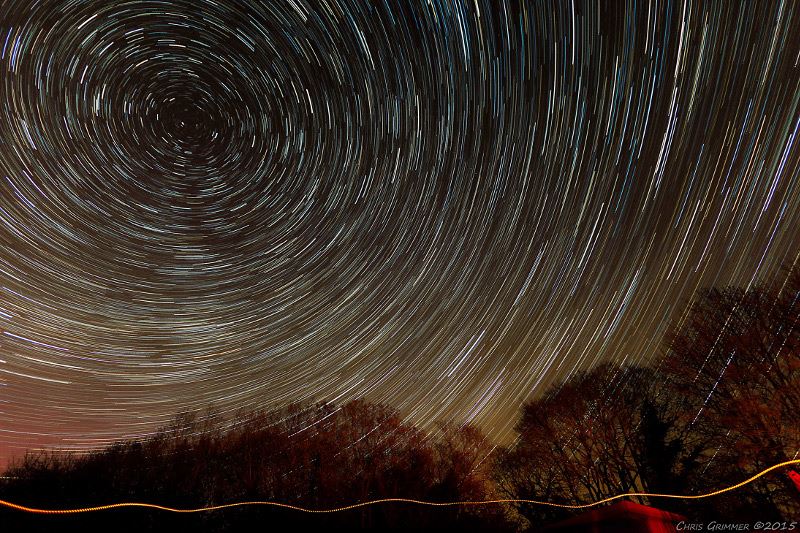 Unlike the previous image, focusing on the pole star can give striking results, as everything rotates around a central point. One easy way to locate the pole star is to use the constellations of the Plough or the Big Dipper. If you draw a line through the end two stars, the next bright star you come to is the Pole Star. 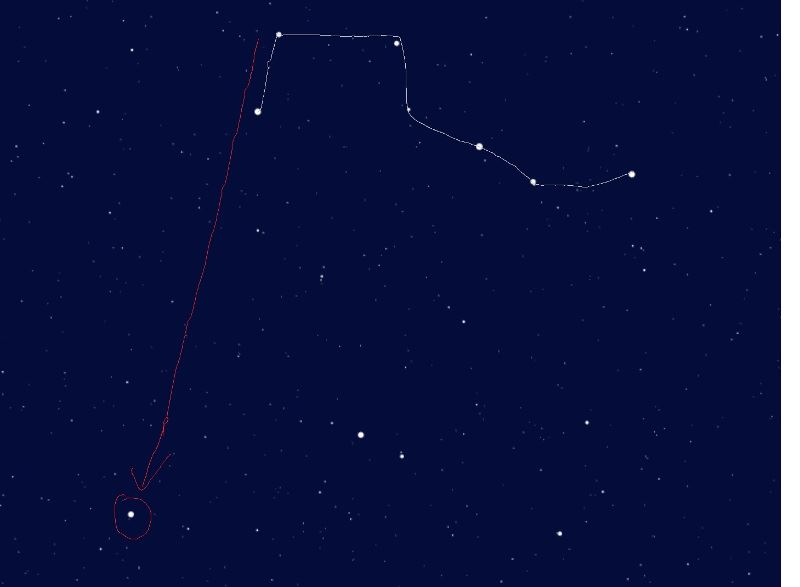 To capture your star-trail image, set your camera up with on a tripod using your lens of choice; personally I would keep it the lens as wide as possible to give a real sense of movement. Set your exposure time to 30 seconds, aperture to mid-range (f/8) and keep your ISO low. Using a remote shutter release, set it to run continuously (do not leave gaps between your exposures) and let it run for as long as you can, the longer the better.

The software I use to stack the final images is called “Startrails” and is free to download and easy to use. You load the images, there are a couple of settings to select, and then you set it going. The nice thing with this software is that you see your image being built on the screen as it develops.

Tip: Make sure you shoot in JPG format for star-trails. The software only accepts JPG format so this can save you a lot of time.

It is not just natural phenomena that can put on a show in our night sky. There are more than 2000 human-made satellites in orbit around Earth, ranging from the football field-sized International Space Station to lunchbox-sized Cubesats. Other satellites are completely random objects, such as a bag of spanners lost by an astronaut on a spacewalk.

Some recent additions that are getting the attention of astronomers are SpaceX’s Starlink satellites. Unlike most, these are positioned in a string of 40 or more. These satellites are visible over the UK for the next few weeks and will appear as a string of bright moving lights. There are numerous websites and apps that can show you when and where they will be visible. One app that is very helpful is “Heavens Above”, which is free on both Android and IOS platforms. This app can be difficult to interpret as it shows every satellite that passes, so I use it in conjunction with the website james.darpinian.com/satellites to identify the best pass times and then refer to the app to see where in the sky they will pass.

One of the most famous and brightest satellites is the International Space Station. A huge station that has been permanently crewed for the past 20 years, traveling at 17,500 mph, 250 miles above the Earth. Due to the size of the solar panels, when the ISS passes, it is very noticeable. 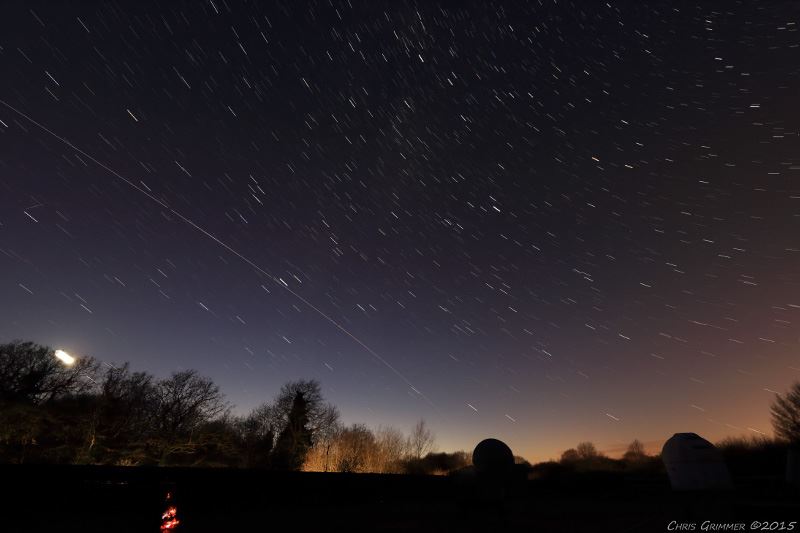 To capture the ISS, use the same settings as above. There are two ways to process the pics: via Startrails as discussed earlier, or if you prefer to keep round-shaped stars, then you can add the images as layers in Photoshop and use hide/reveal all layers to bring through the trail of the ISS into a single image. This is the technique used in the image above. To track the ISS, I use an app called “ISS Detector” which is another free app on iOS and Android.

Just before sunrise during spring, the Milky Way graces our early morning skies. This is unfortunately another subject that requires very dark skies and will be destroyed by light pollution. For shooting the Milky Way, pick your widest and fastest lens from your bag and shoot wide open (f/2.8 or faster is optimall). Keeping the aperture wide open will push the optics of your lens to their limits, but will allow the maximum light possible into the camera in the shortest possible time. As discussed previously, your exposure time is limited as you need to keep your stars round, so fast aperture and decent ISO settings are required.

Often your widest lens is still not enough to capture the whole of the Milky Way; this is where a panorama or mosaic image is a good option. This may require you taking an image that is four or five shots wide and potentially two images high, so a sturdy tripod with pan and tilt head will be a huge advantage. Ensure you are shooting in RAW, as you will need to post-process the images in your processing software.

To create the mosaic, this can be done in Photoshop Lightroom, but an alternative and free program is Microsoft ICE (which stands for Image Composite Editor). I have found this software to be exceptional for stacking mosaics, even moon mosaics comprising more than 40 individual images.

There is always something happening in our night sky, whether you are a photographer or just out to enjoy the view. With the warmer weather making the evenings much more comfortable, why not get out and enjoy it?

Astrophotography with a smartphone camera?