Travel. Just the word has vaguely romantic connotations. Images of steam trains, Chinese junks and Bedouin caravans flood into the mind and the great unknown parts of the world beckon to be explored. I obviously watched too many Indiana Jones-type adventure films as a kid, because the reality is quite different; there’s nothing romantic about spending 8 hours waiting in Heathrow’s terminal 4 with just a Costa Coffee employee and an incessantly beeping cleaning cart to keep you company.

As for the undiscovered world, Michael Palin has already filmed a documentary on most of it. And yet travelling and, as a result, travel photography are still hugely popular pastimes, so is there perhaps still enough mystery in the world to make all the effort worthwhile? If my recent trip to Peru is anything to go by, the answer is a resounding “yes”.

Here I’ve collected some tips and ideas that have come from my own photography during my travels throughout the UK, some of Europe, and my South American adventure. It’s not an exclusive or definitive list, but it might just help get you thinking. So, in no particular order…

It probably seems like a really obvious suggestion, but it’s all too easy to miss photographic opportunities because you don’t have your camera with you. 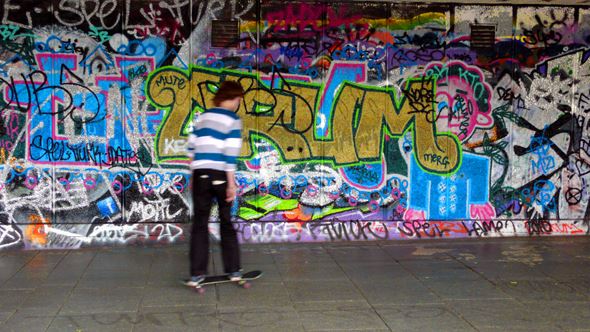 You might stumble across photographic opportunities where you least expect them...

So whether you’re on a trip to the capital for business or walking from your hotel room to the swimming pool on holiday, take your camera with you. If you don’t, only you will know what you’ve missed. 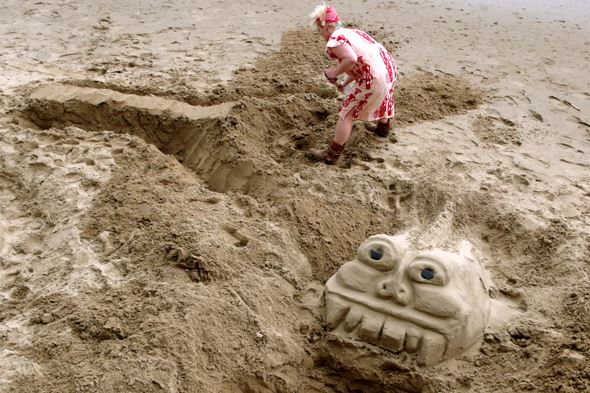 ...so make sure you have your camera with you when you do.

Like it or not, computers are now as much a part of photography as cameras are. The benefit of this digital revolution is that techniques that were previously only available to darkroom magicians are now open to almost anybody with a home PC. So don’t ignore this aspect of your photography and think about it when you take your pictures. For example, I only ever shoot in colour. If I subsequently decide that a shot would look good in black and white, I can convert it using software. 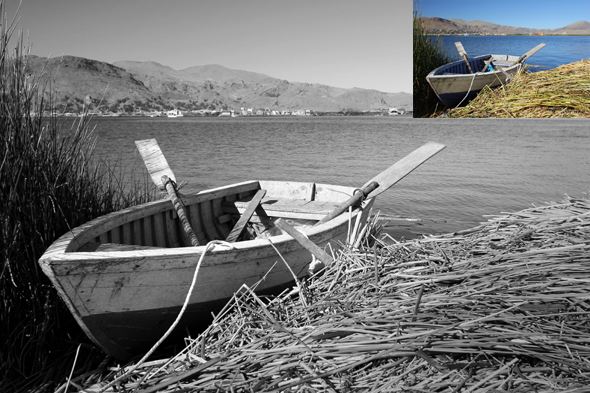 Software will also allow you to combine shots for a panoramic print and even rescue shots that might otherwise be consigned to the recycle bin – in itself a valid reason not to delete any pictures from a memory card while you’re away. 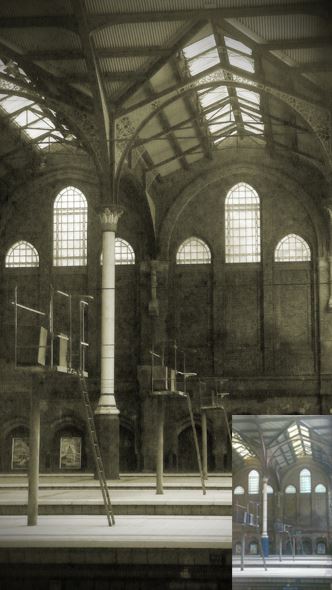 Tip: Take pictures of anything and everything

Another obvious tip but one that’s easily forgotten. While travelling, take as many pictures of as much as possible, particularly if your trip is a never-to-be-repeated journey. 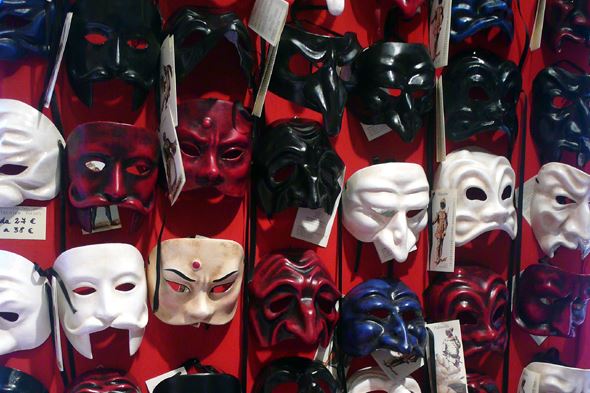 Carnivale masks in a Venetian shop

Becoming complacent is the curse of the travelling photographer and you’ll often find the number of pictures you take trailing off as your voyage goes on. Try not to let that happen. The fond memories of a place are often found in the details, as are great photos, so shoot all the pictures you want. 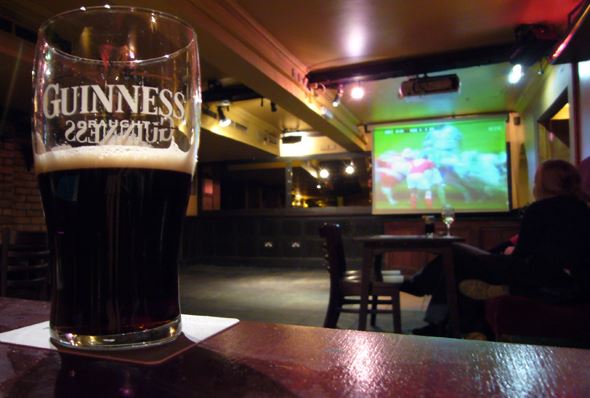 We'd travelled to Dublin to watch the rugby and this shot takes me right back there. 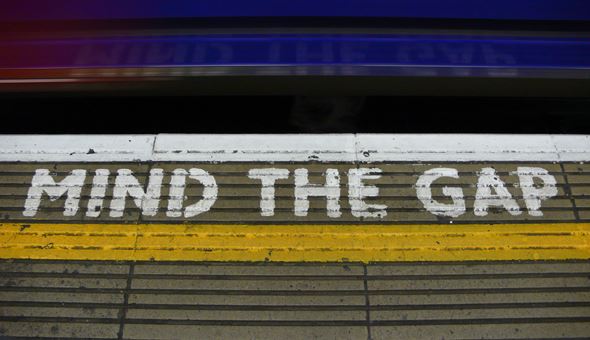 The ubiquitous 'Mind the gap' signs are easily over-looked, but are an essential part of London travel

There are some photos that crop up over and over again; on magazine covers, in photo competition entries and in the portfolios of photographers every where. You know the kind of thing I mean – the blurred waterfall, the lone tree in a field etc. etc. 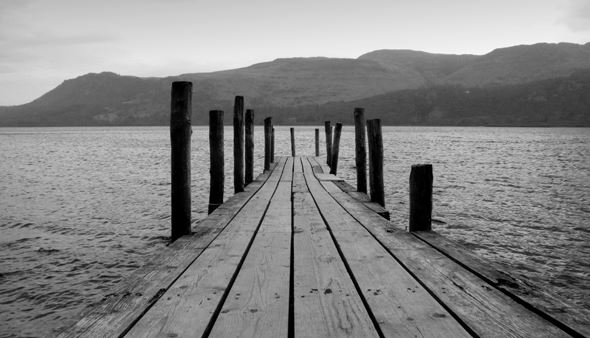 But just because they’ve been done a hundred times before shouldn’t necessarily put you off from capturing the same pictures. In fact, why not make it a mission to capture as many as possible? You might even be able to come up with a twist to some of them, just to plant your own identity on the shot. 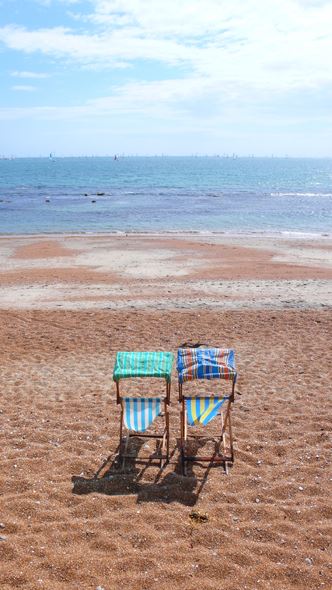 Whatever the reason, capturing some travel photo clichés can be both a challenge and some fun. 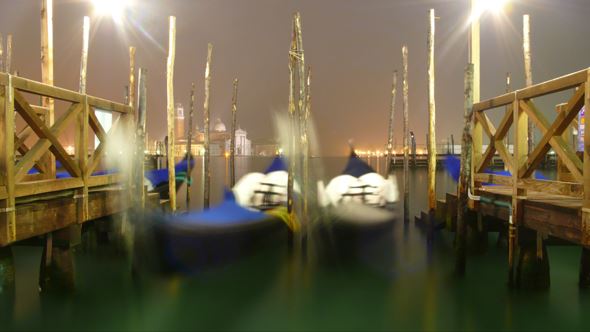 Blurry gondolas and the lagoon at night? Oh, that's a good one to get! Check.

Tip: Stray from the path

One of the seemingly unwritten rules of travel photography is that the obvious shot is rarely the best shot. If you find yourself amongst a group of photographers all pointing their cameras in the same direction, then you either want to be pointing yours at something else or be somewhere else altogether. Whilst this is sometimes easier said than done, you often don’t have to move too far to get a different perspective. On other occasions, a bit more hard work might be involved. 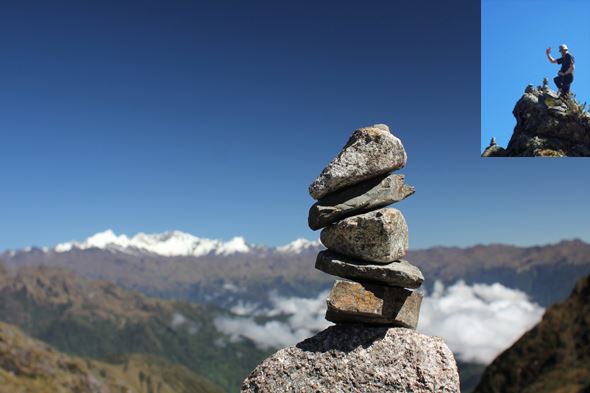 Sometimes all you need to do is turn around for a different shot, while on other occasions it’s simply worth having a look to see if there’s something everybody else has missed. You’ll be surprised how often there will be. 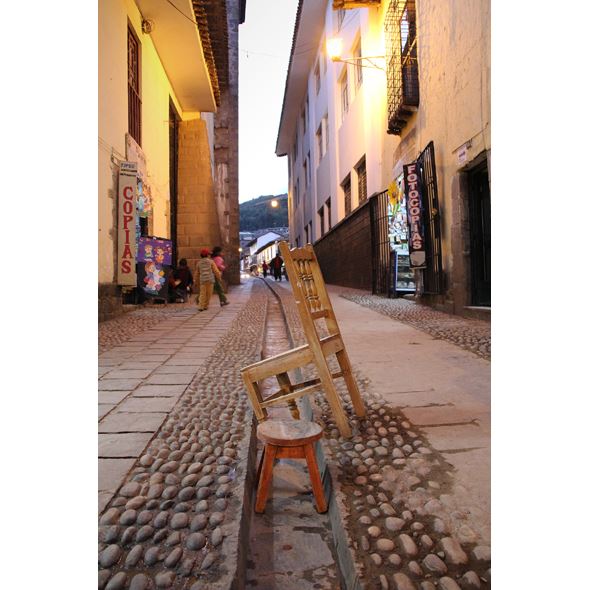 Idea: Try to capture the feel of a place

The physical landmarks and locations of a destination do not change drastically, and as a result it’s not unusual for photographers to end up with very similar shots, even if they’ve taken the photograph several months or even years apart. However, the feel of a place, that indescribable “x” factor that gives a destination its ambience and that you take away with you when you leave, that can change dramatically. 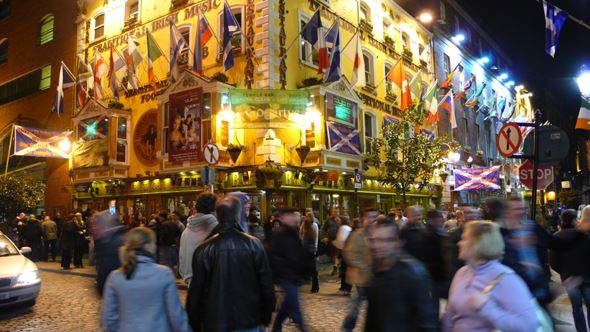 All kinds of things can have that effect, including the weather, the people, the time of year and many others. It’s not an easy thing to do and something that the best travel photographers strive for every time, but if you capture that essence of a place in a single photograph, then your photography really will stand out from the crowd. 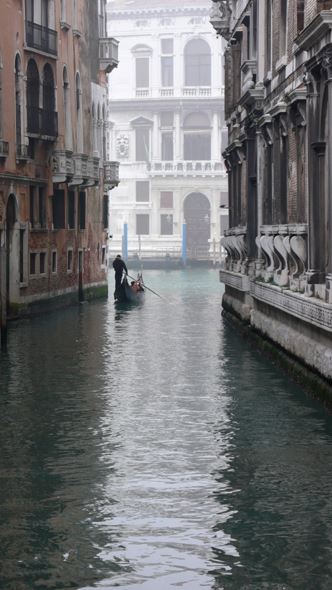 Venice in January and one of my favourite travel shots

Tip: Use your camera's screen

You’re no doubt aware that your digital camera has a screen on the back of it. You’ve probably used it to compose your photos, review your photos, and show your photos to others, but have you ever used it to help make a photo?

I’ll share a personal experience with you; while trekking the Inca Trail in Peru we cam across a small farm shack with some young Andean children playing guns with some twigs outside. I started taking some photos of one boy and he stopped playing and looked at me puzzlingly. 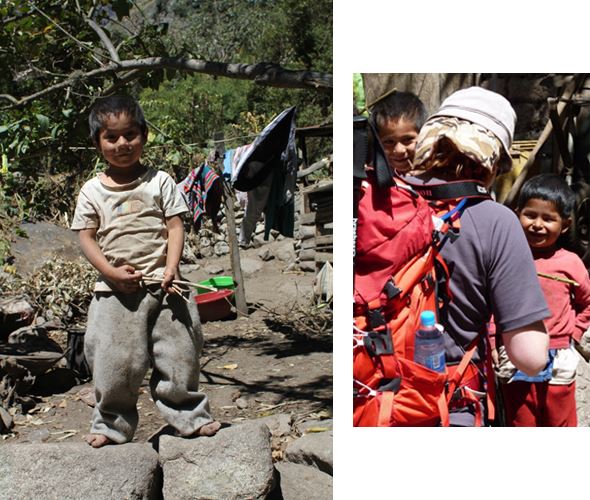 I turned the camera around, held it out in front of me and showed him the photos I’d been taken. A huge grin appeared on his face, he called his friends over to have a look, and before long they were all posing for pictures, each desperate to see their photo on the camera screen after it had been taken.

They wanted their picture taken and I wanted to photograph them - everybody was happy!

Say what you like about digital, but you couldn’t do that with film.

Often when travelling around a place you’ll come across reoccurring themes. My parents once returned from a trip to Lake Garda with a poster made up of 36 individual photos of various picturesque doors. I’ve seen similar pictures from all over the place since then, and while in Peru the combination of ornate decorative doors and windows of the colonial buildings combined with the more run-down mud-brick buildings led me to attempt something similar. 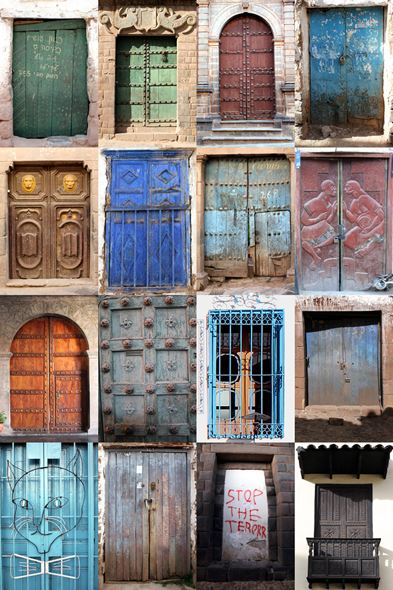 Of course you don’t have to be limited to doors and windows. Another recurring theme in Peru was the prevalence of old VW Beetles and photographing some of these made for another mini project. 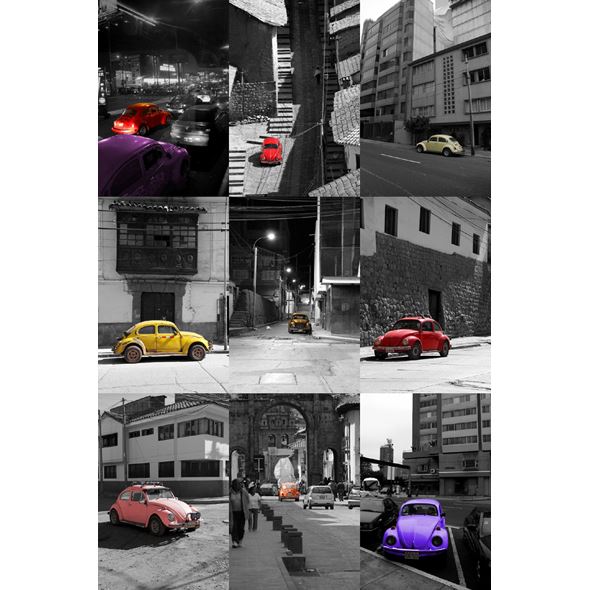 Beetles of Peru (and not the creepy-crawly variety)

You can choose whatever subject you like – churches, piers, beach huts, stones, dogs – as long as there’s a variety of them than why not have ago at a collaged collection?

Tip: Get a sense of perspective

Scale and position can really make a travel shot. Not sure what I mean? Well, look at it this way. You’re standing near the base of a towering mountain pass and you see the biggest, tallest cliff face you’ve ever seen stretching up in front of you. Naturally, you want to show the f.b.h. (folks back home), so you take a picture. The problem is, when you eventually show it to the f.b.h. all they see if a large piece of rock. You see, they won’t be able to tell from that photo exactly where you were when you took the photo, and without something to give that soaring rock face a sense of scale, they won’t be able to tell if it’s 60 feet or 6000 feet tall.

To “locate” your photos, it’s often possible to find a sign or landmark to include in your photo to prove where it was taken. 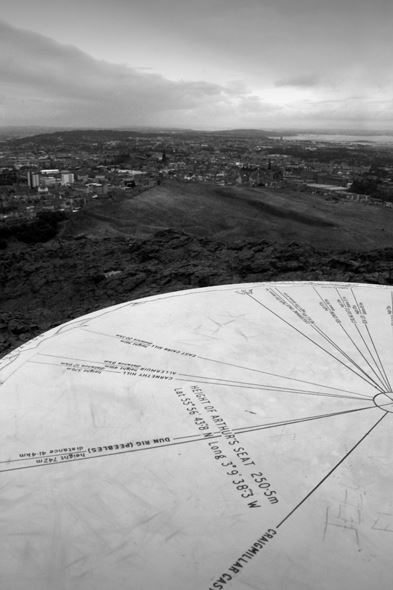 Looking back towards Edinburgh from the summit of Arthur's Seat

If it’s scale you need, simply including a person or another easily recognised object or feature throws the whole image into perspective. 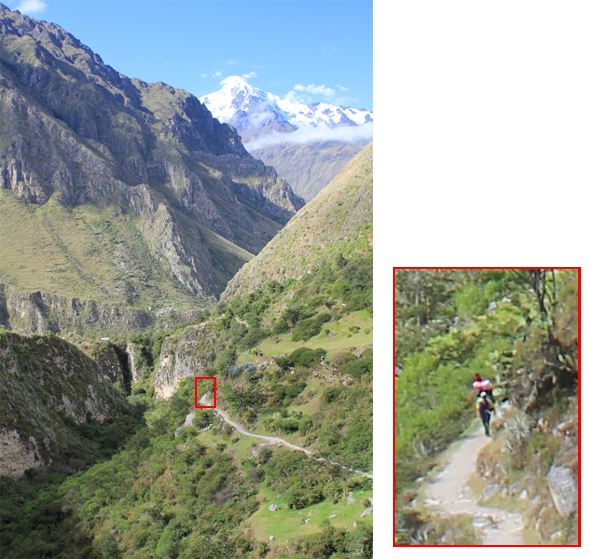 Once you've spotted the tiny figure of the porter on the trail, the vast scale of the scenery can really be appreciated

It’s now simple for anyone to see and appreciate the vast scale of your subject and the lengths you went to to capture it.

So you’ve travelled the globe taking incredible photographs. What next? Rather than just storing your images on your hard drive to show to the occasional visitor who’s strapped into an armchair and forced to endure the full 5 hour slide show (you won’t be seeing that postman again), how about a slightly more viewer friendly approach to showing off your work?

Perhaps the most obvious way to put your pictures in front of people is to frame them and hang them on the wall. Alternatively, get yourself a canvas kit and create something a little fancy. There are plenty of services that will do this for you, but it’s often cheaper and far more satisfying to do it yourself. 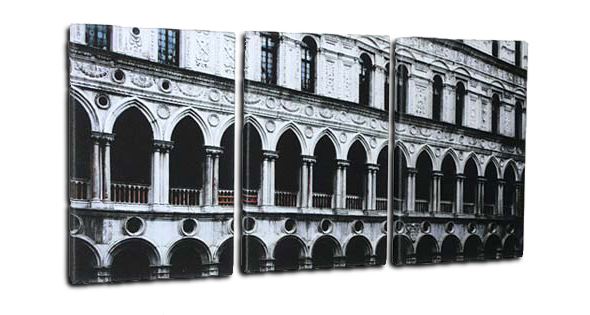 A triptych of a Venetian scene on canvas

Alternatively, create a coffee table book to show people. Visitors will pick up a book and browse through the images far more readily than they will on a computer and the experience is usually more enjoyable on paper than it is on a monitor. Again, there are plenty of online and high street services that will create a photo book for you, but home printing a photo album is an enjoyable process and gives you far greater control over the final appearance of the book.

Become a 'published' photographer by printing you own photo book

Finally, if you really want to get your photos out there, turn yourself into a walking portfolio by printing your images on a t-shirt. Sheets of T-Shirt transfers are readily available and can be printed on like regular paper. They’re then ironed or pressed onto a t-shirt (you have to supply your own) and, voila, you can show of your photographic skills and your fashion sense at the same time. 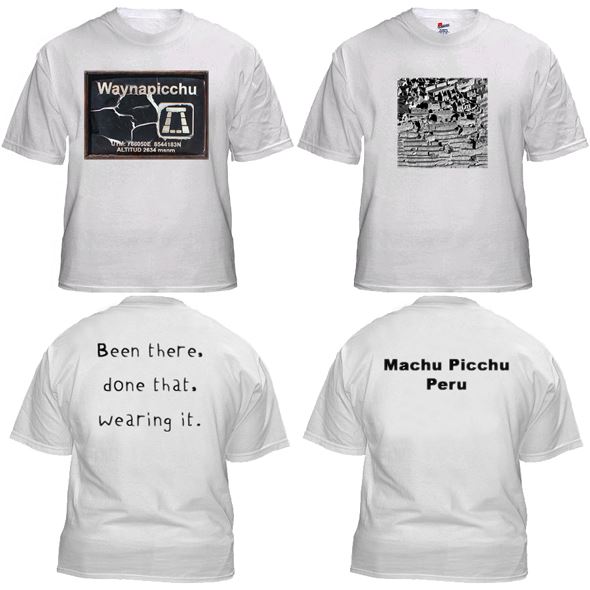 Become a walking gallery to show off your best photos

Any of these is a far better use of your photos than simply clogging up your hard drive or torturing house guests.

It’s a great big wide world and, while most of it has been explored, there’s still lots of exploring to be done, certainly by me. And, for many of us, taking photos will be an important part of that exploration. 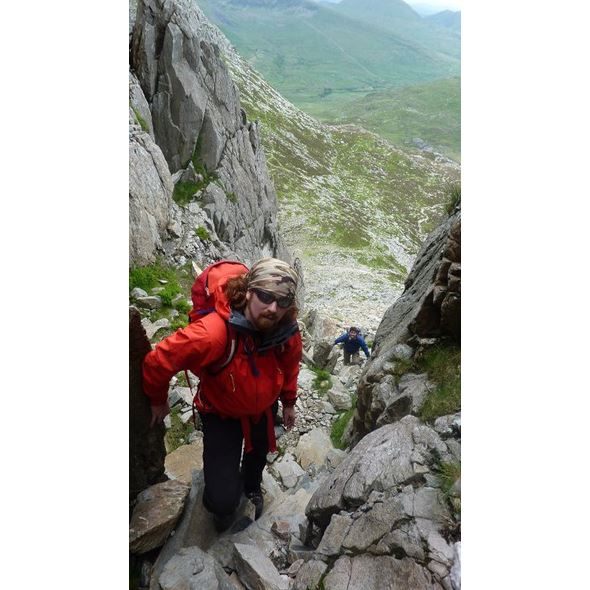 I don’t know who said it first, but it seems a good quote to end with: