Wildlife Gardening and Photography for August

August - summer's last hurrah before the temperatures gradually take a turn and sure enough, we hear the faint whispers of “winter is coming.”

Swifts will be journeying back to Africa. Many plants will begin to show signs of berries and seeds that will see native species through the colder months. As we’ve come to learn, we must plan upkeep and changes to our gardens, but before we take the next steps  - if you’re looking for one last flurry of colour, you can deadhead (remove fading/dying flowers) to keep your plants looking spritely and encourage a final bloom.

So, we best make the most of the heat and longer daylight hours we have left and get our cameras out! 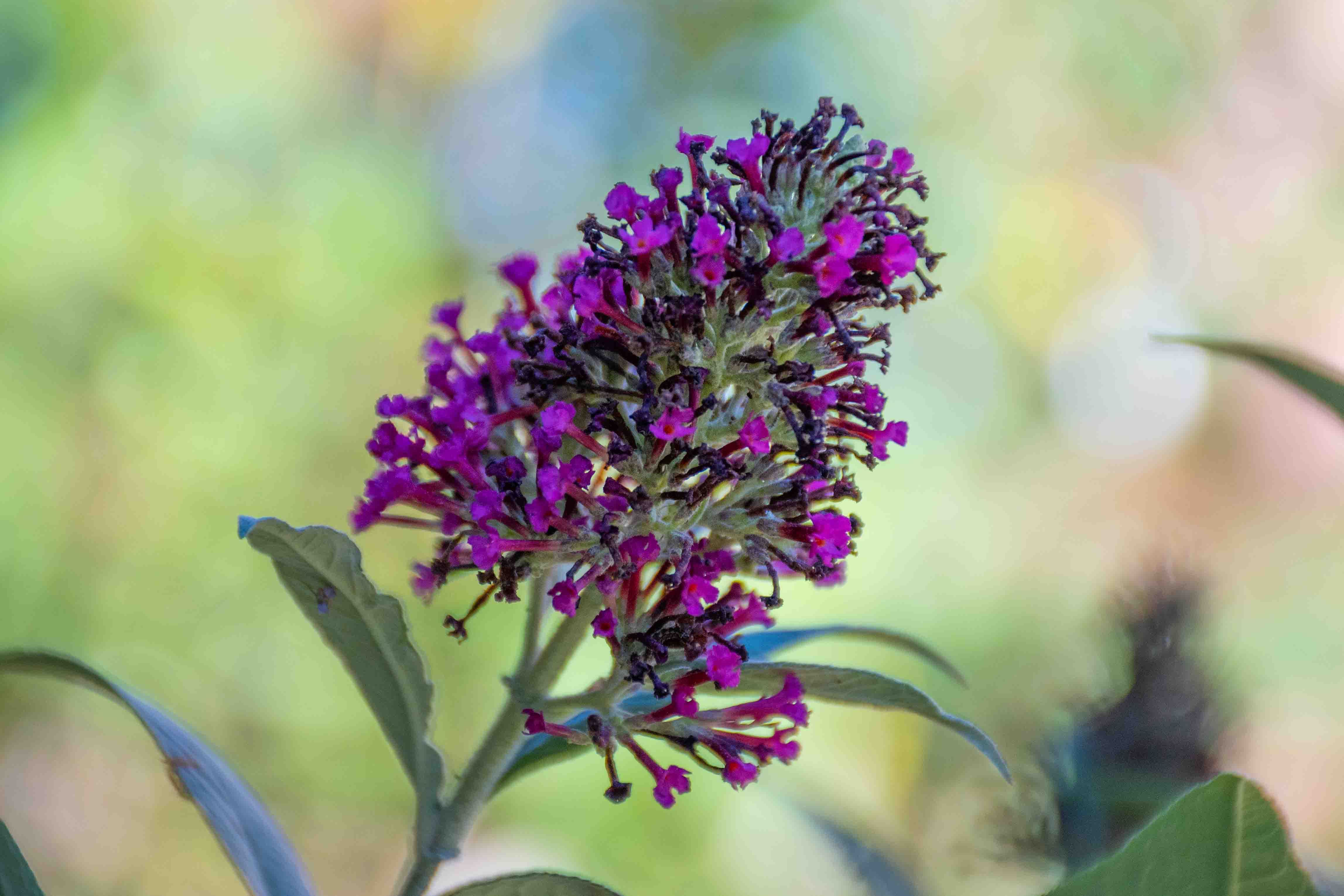 By nature, as wildlife gardeners, we can become very attached and somewhat militant about the comings and growings that happen in our gardens. Generally, you should plant species native to your area but several factors must be considered.

Would you be destroying an already established habitat to try for another? Are the animals benefiting from what’s there now? How much better off would they be with other options? 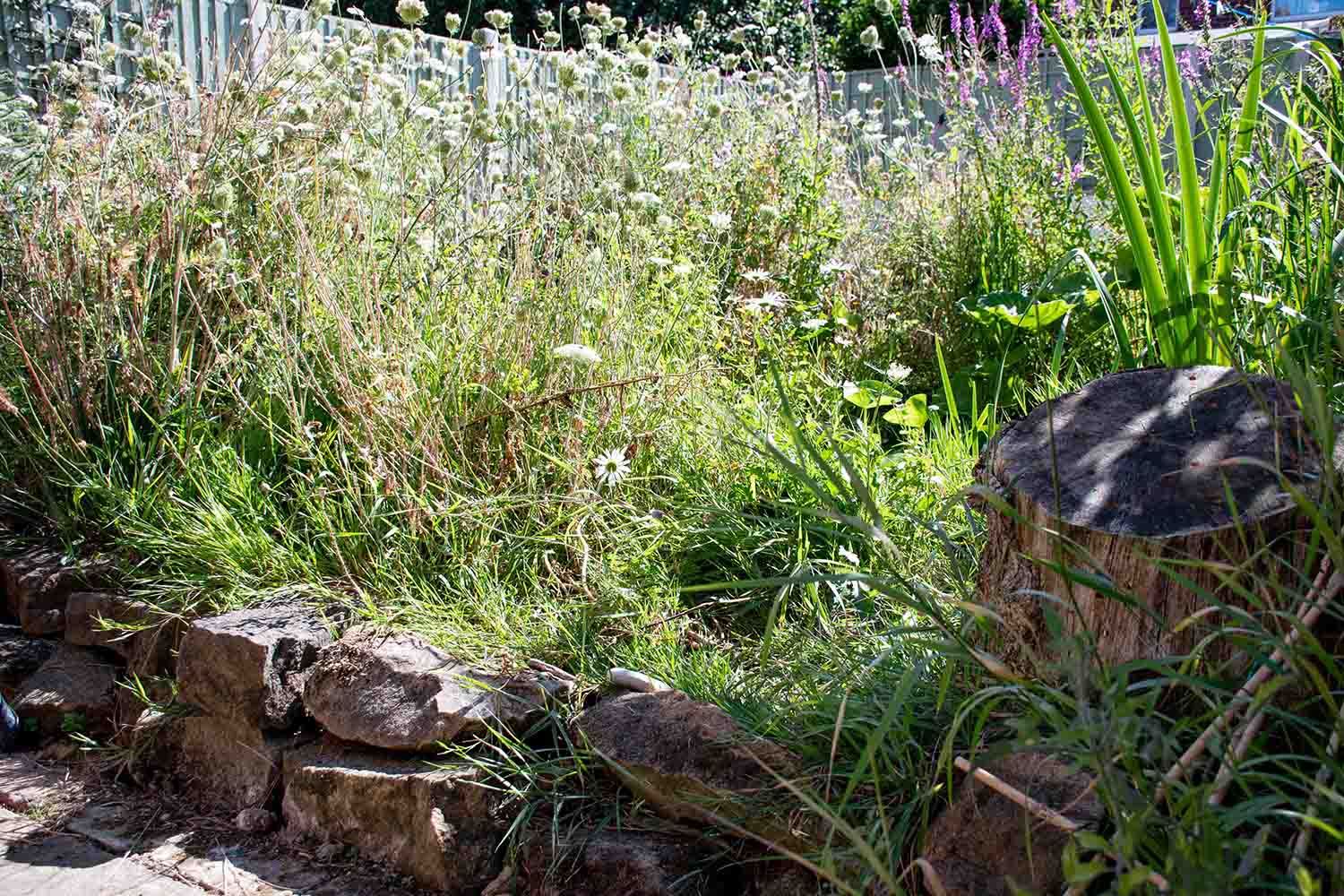 For my garden, I indulge in a mixture. I love wildflowers but many British species have a disappointingly short (but beautiful) flowering period - and this is what local insects have evolved with. But, if you’re trying to create an extensive colour palette within your garden, you may want to include some additional flowering plants such as calendula, lavender, clematis and of course, buddleia. These and other similar species offer colour for a longer period (as well as some extra nectar for the invertebrates.) 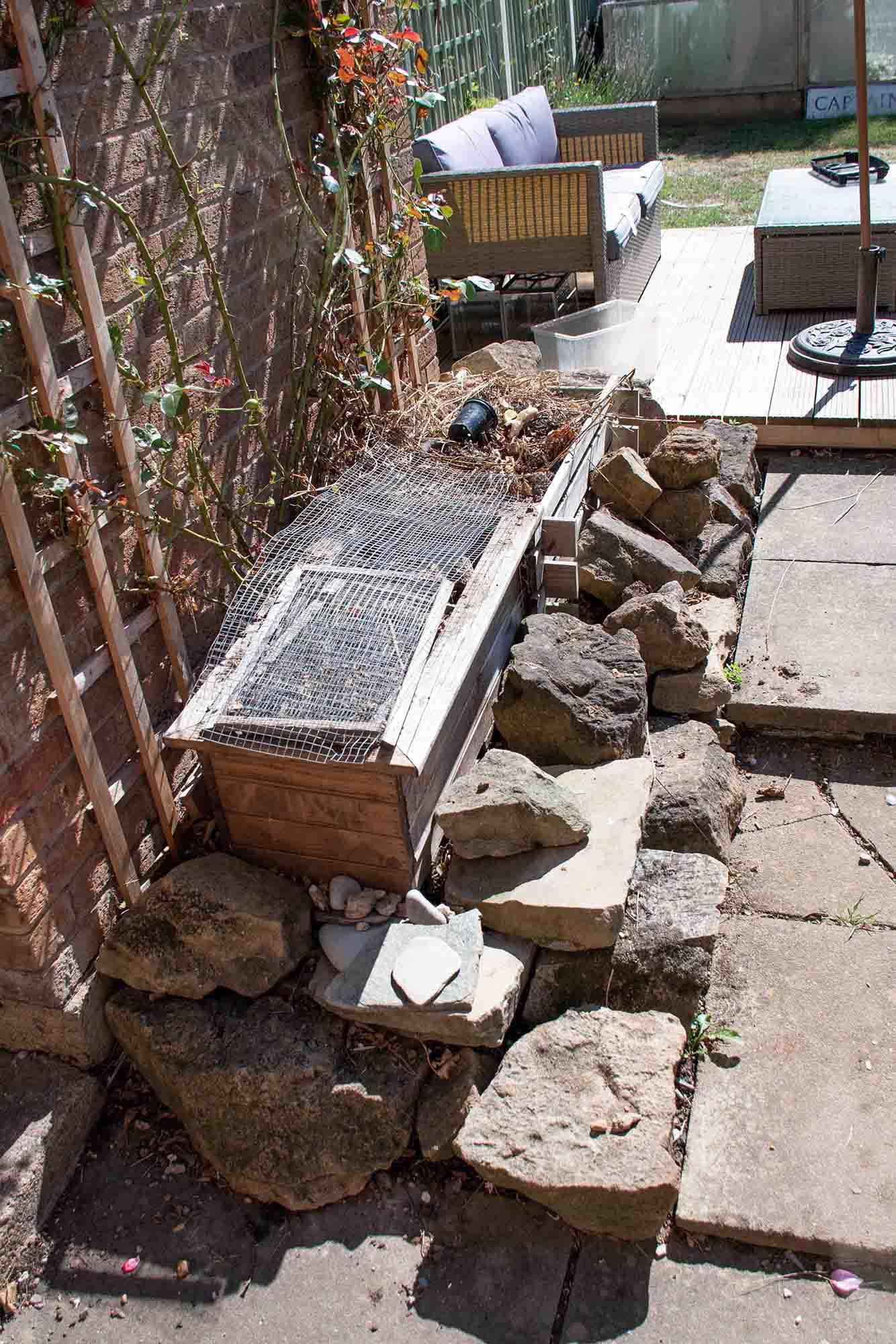 What may seem like just a pile of stones to the untrained eye, can be a valuable resource for many creatures. A rockery provides a home, shade and shelter from the weather for all sorts of species such as insects, lizards, frogs and newts that will take refuge under them.

You can build a stone wall (I tried, and failed), place them around other features, or blend them into other areas of your garden. You can use them to border off flower beds or vegetable patches, and eventually, they’ll become a home for moss and lichen.

They don’t have to be expensive either. I got most of my rocks from people giving them away or buying them online instead of going to expensive garden centres, which saved me quite a bit of money. You might think you could just go to the beach but it’s actually illegal to remove any natural material - including sand or stones - from public beaches!

Whatever route you go, this simple addition to your garden will play hose to all sorts of critters and add to your garden’s biodiversity.

Beautiful flowers are one aspect of a wildlife garden, but having plants that provide you with a resource is all the better. For this, we can plant herbs. Herbs are a wonderful addition to our backyard wildlife and, of course, they add flavour to our food!

Sage, thyme and rosemary, for example, are versatile culinary herbs and thanks to their small flowers (with lots of nectar), they are great for bees and butterflies too! Species like fennel, are very tasty and also drop the seeds in the autumn that birds will feed on. Wild strawberries and blackberries - delicious - are a valuable food source for local foxes - often helping themselves to a couple on the patrol through our gardens. 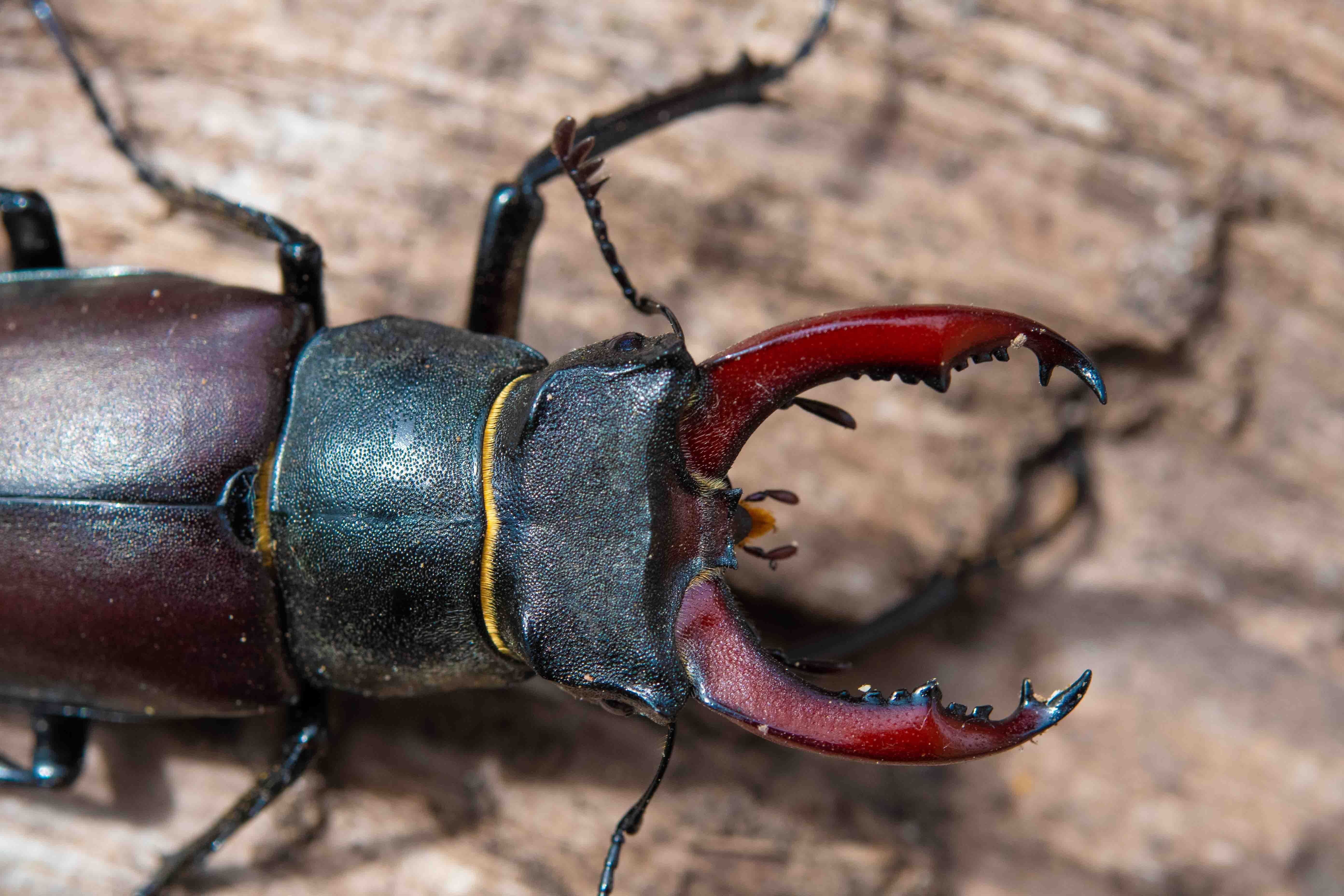 It has to be said - August is more or less the end of stag beetle season in the UK. But, there is still a chance at the start of the month to see Britain’s largest beetle.

At this point in the year, what few stag beetles remain can be seen in south-easterly and southern counties. If you’re outside of those areas, the chances we pretty slim. However, there’s another species that’s much more widespread, even at this time of the year - the lesser stag beetle. Only lesser by name, these smaller beetles may not be adorned with battle-ready head gear (horns) but they’re still an impressive beetle to come across and will greatly appreciate any dead wood in the garden. Be sure to look around your garden, under stumps and whatnot - I found 8 the day I moved into my house!

When it comes to taking photos of them (either species), once you have one in your sight, you’ll probably not need to worry about it darting out of sight. Let’s put it this way - neither species will be winning any races. They’re both fairly slow-moving, clumsy and often find themselves on their backs. That being said, both species do often turn up when you least expect them. So, have your cameras at the ready.

If you want to increase your chances of seeing one in your garden (and if you have several years on your hands…), you can build a log pile in your backyard. Log piles support a wide range of wildlife, moss, fungi, insects and other invertebrates. This will in turn attract small mammals, reptiles, amphibians and birds that will fancy a snack. For stag beetles, a log pile will make a perfect home where they will lay their eggs in the rotting wood.

Sure, it’ll take several years for the larva to emerge as beetles, but you can take solace in the fact you have created a beautiful rotting home that beetles and other wildlife will love. 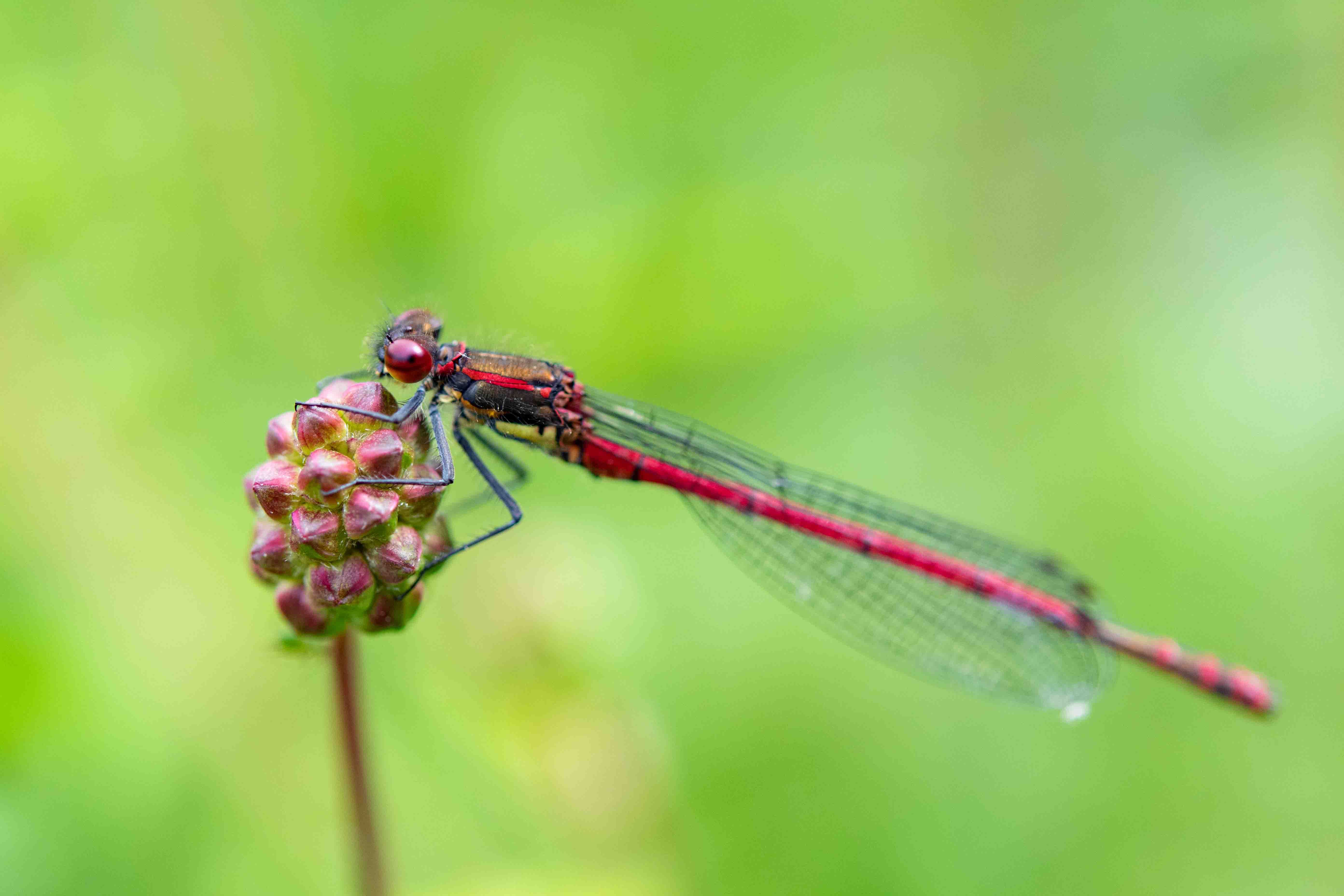 Damselflies, the dainty cousins of the dragonfly, are often one of the first colonisers of garden ponds. Well-vegetated and generally weedy ponds are the most appealing. In the UK, we’re lucky enough to have 17 species of damselflies, the most common of which are the large red damselfly, azure, common blue and blue-tailed.

Like most critters in our gardens, they’re most active by midday when it's warmer. So, if you’re looking to get a close-up macro shot, you’ll need to be on the lookout in the early hours of the morning when they are less active. They’ll probably be hidden away in the long grass near the pond.

Damselflies aren’t as fussy about the size of a pond as dragonflies are, so if you only have a small pond, there’s a good chance these stunning insects will still come and visit.

Flowering between June and August, when its nectar becomes a valuable food source for long-tongued insects such as brimstone butterflies, red-tailed bumblebees and elephant hawk-moths; the purple-loosestrife is a tall stemmed plant with long spikes of magenta flowers. It can be found in wet and boggy habitats such as reedbeds, ponds, and riverbanks where many of its tall stems can grow from a single rootstock.

With the flowers of the purple-loosestrife being such an insect magnet, it's a good idea to keep the camera pointing at the plant and wait for the subject to come to you - if you grow it, they will come. It's a fantastic marginal plant to have in any wet area in the garden, growing in the shallows of ponds, bogs or water features. And, as it flowers later in the year, it will give insects a boost of nectar when other plants are dying off.

Fun fact - It also has some medicinal properties used to treat dysentery and diarrhoea. You should definitely consult a doctor before going for a nibble.

Along with damselflies, pond skaters are also one of the first colonisers that you’ll see in a garden pond. These fascinating insects are seen skating around the surface of the water, avoiding sinking thanks to water-repellent hairs on the bottom of their feet that enable them to walk on the water surface.

Pond skaters have three pairs of legs, all with different purposes; the first is used to catch prey, the second is used like oars to propel the insect across the water, and the third pair is used to steer. Poised on the water, pond skaters can sense the slightest vibrations made by their prey and can glide with impressive speed to feast by latching on with the first pair of legs and then stabbing them with their mouth and drinking the insides. Pretty gruesome for such a tiny insect!

In the winter, they leave the pond and hibernate under rocks and logs on land. If you are physically able to get low to the water with a macro lens  (it’s getting a bit much for me these days), you’ll be able to capture some fantastic scenes, especially on a still day with some good reflections. 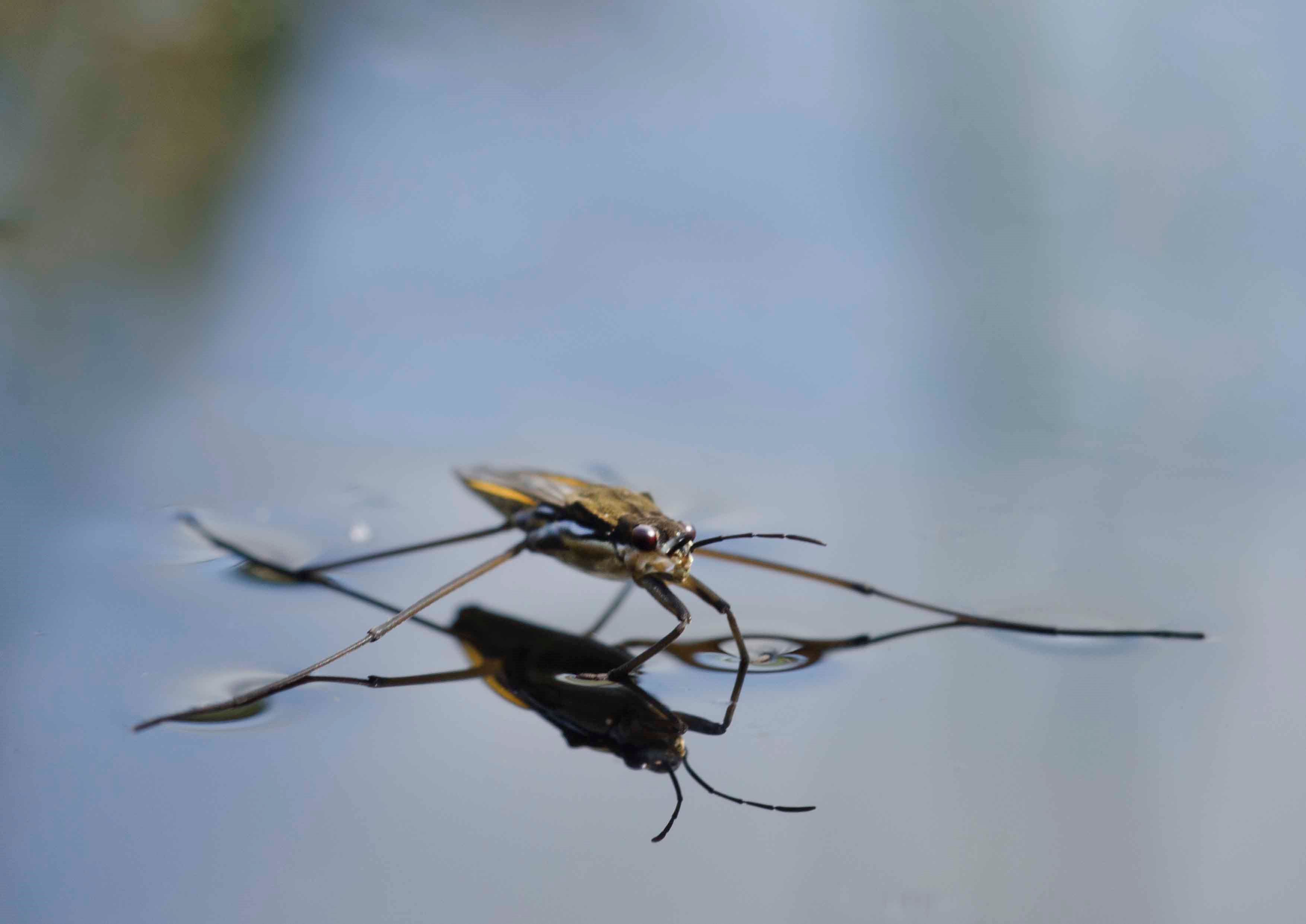 By this point in the year, most birds will have successfully raised their young and you may well see them flitting around the garden with their parents not too far away. Make the most of the sun and enjoy the buzzing of bees as it will soon be a distant memory when autumn sets in. 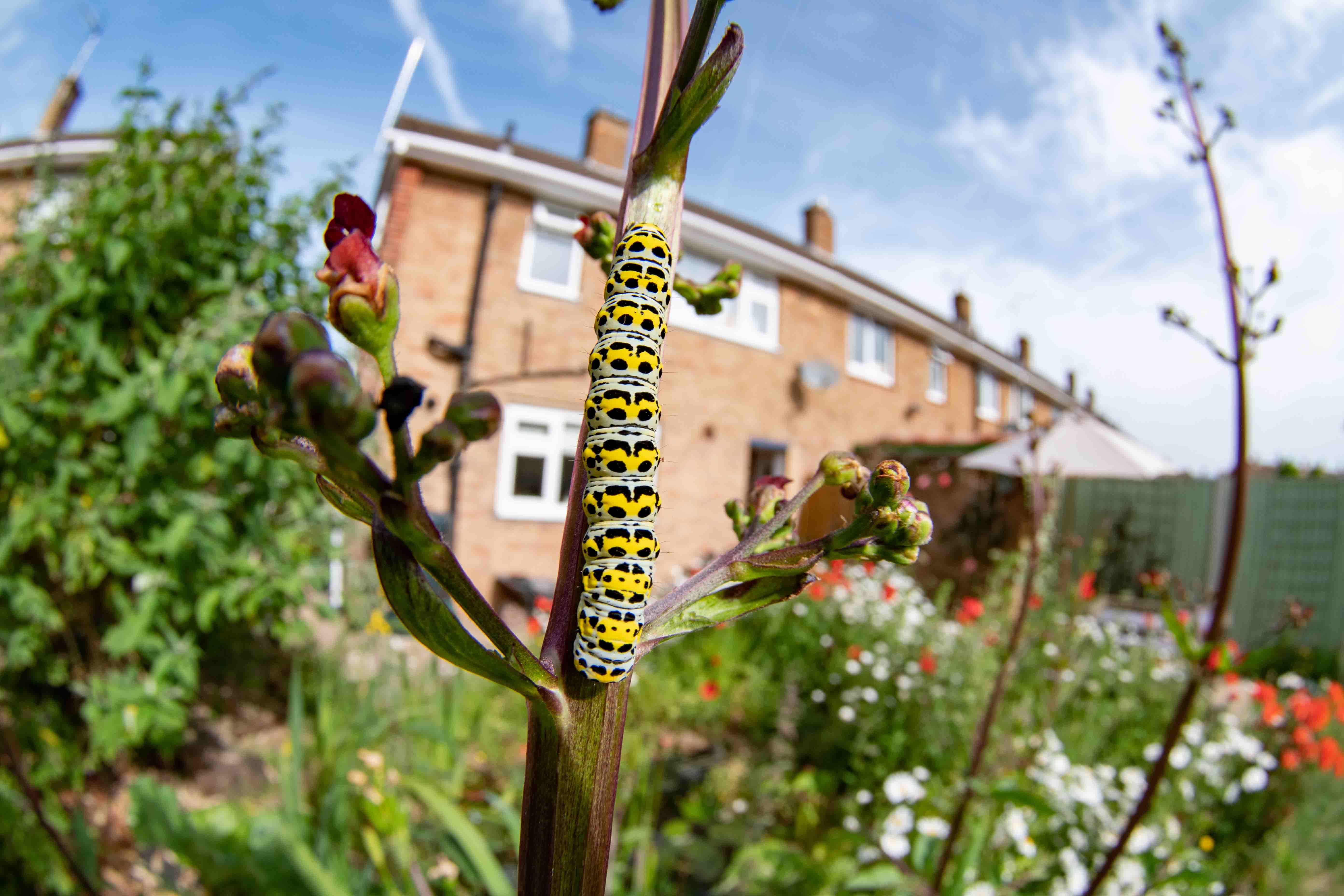 Wildlife Gardening and Photography for July 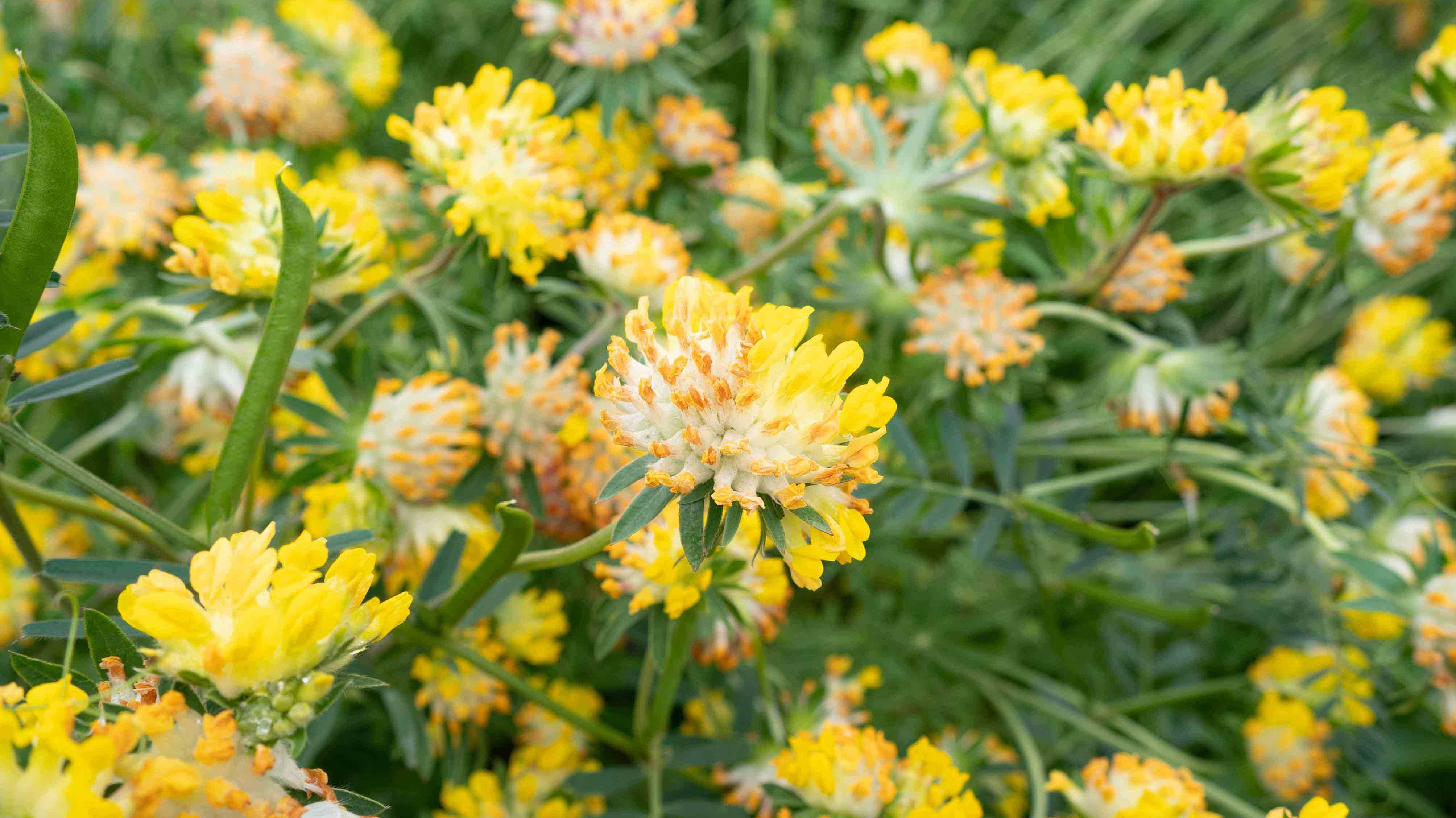 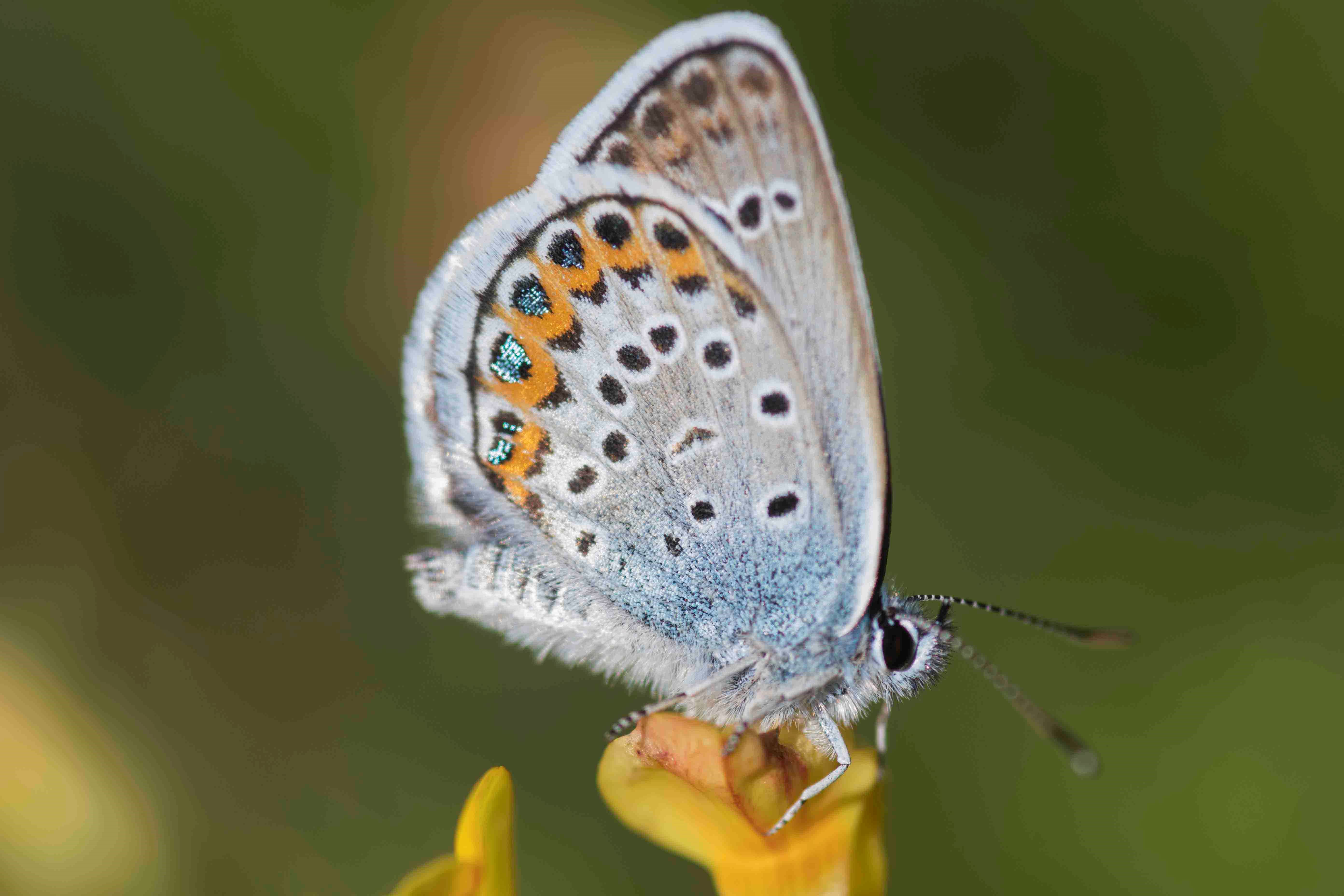 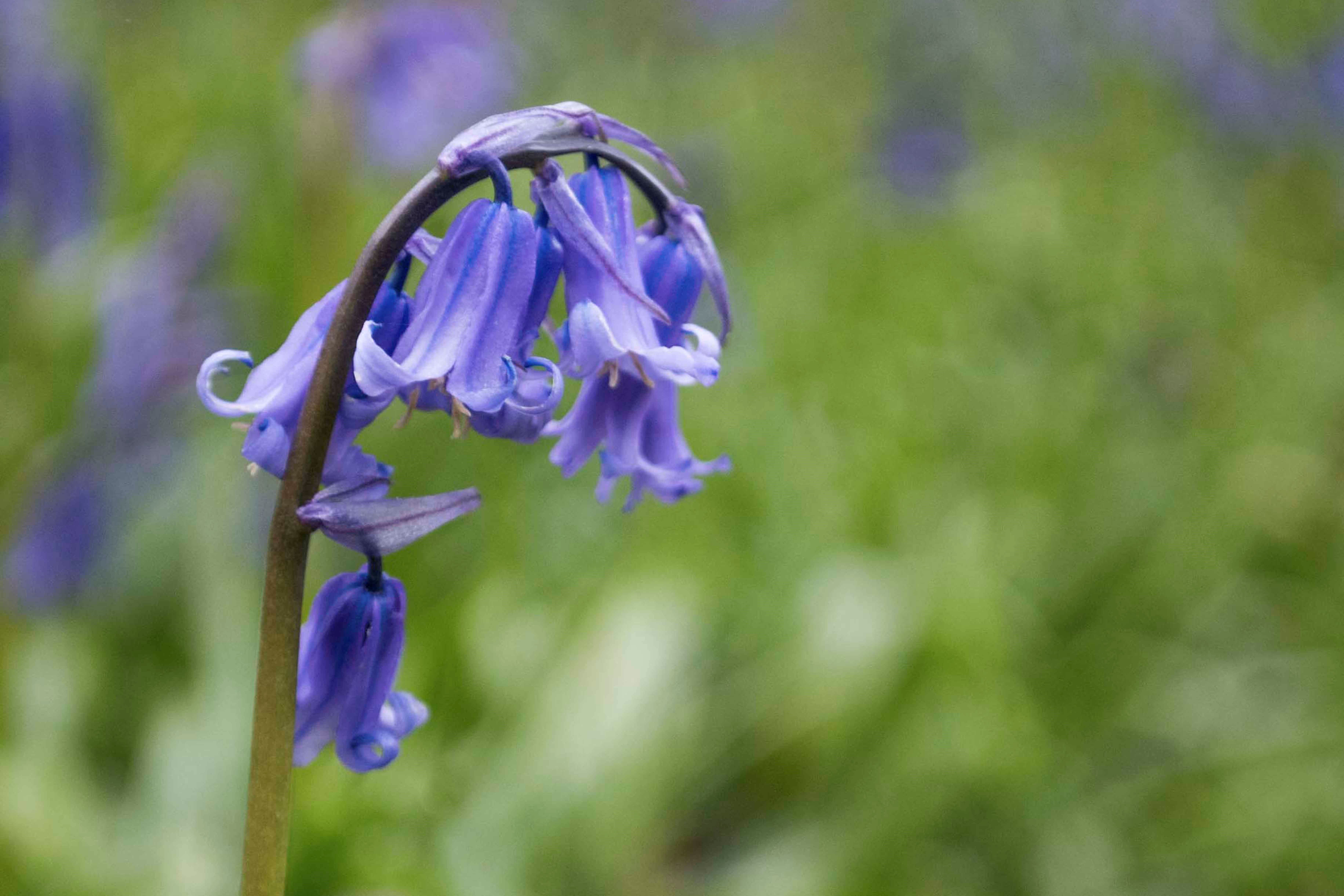