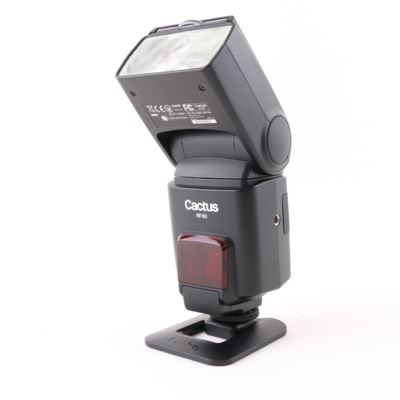 In Stock
Currently available at Wex Photo Video Norwich
This used product is in good stock and is available for dispatch in our normal delivery timescales.

Mint, like new - Nearly new with only the lightest of cosmetic marks

Flashgun is mint and free of marks with the exception of light scratches to the sensor window and light marks to the hot shoe mount.

Flashgun is mint and free of marks with the exception of light scratches to the sensor window and light marks to the hot shoe mount.

The Cactus RF60 is a portable flash with a built-in wireless transmitter and receiver - a clever combination which has you wondering why every flashgun isn't made this way. The RF60 is easy to use, either as a stand-alone unit or in concert with other flash units: The menu system is simple and easy to navigate, the display clear, and the specifications impressive. With its multi-functional excellence at a slice of the price of equivalent, separate units, the RF60 offers excellent value for money.

What are the advantages of using Wireless Flash RF60?
With a transceiver built-in, the RF60 can receive wireless triggering signal from a flash trigger and fire accordingly without having to attach an external receiver to the flash. When using with Cactus V6, both power output and zoom level of the RF60 can be adjusted remotely by Cactus V6.
Also because of the built-in transceiver, the RF60 itself, without anything attach to it, can function as a commander to control other RF60s. If you place an RF60 on a camera hot shoe, you can wirelessly control other off-camera RF60s without using ANY flash trigger at all.

Built-in wireless commander and receiver
The Cactus RF60 is a 2.4GHz radio-based wireless portable flash with a built-in transceiver that runs on 16 channels. It operates in three modes, Local for on-camera operation, Master and Slave modes for off-camera. To act as a commander, set an RF60 to Master and it can trigger an unlimited number of RF60 set in Slave mode. The effective distance between the Master RF60 and Slave RF60 is up to 100m (328 feet).

Remote control of power and zoom levels
The power levels of the RF60 set in Slave mode can be adjusted from 1/128 to 1/1 full power in steps of 0.3EV. Zoom level can also be controlled from a wide 24mm zoom to 105mm. With remote power and zoom control, you can place the RF6 units in hard-to-reach places and control its power and zoom level wirelessly.

Group control of up to four groups with configurable Group Alias
In a typical lighting setup, the ability to adjust, activate and deactivate groups of lights is vital in creating the desired lighting effect. The RF60 can be configured into four distinct groups. Power output can be adjusted in individual group or in all groups at the same time for fast adjustments. To streamline the shooting experience, user can rename each group to: KEY, FILL, SPOT, RIM, HAIR, LEFT, RIGHT, BACK and FRONT instead of remembering the placement of flash groups A, B, C and D.

Optical Slave with delay feature
The RF60 has a built-in optical sensor. The optical sensor captures pre-flash signals that are being emitted earlier than the flash sync. By setting the pre-flash optical trigger and the delay timer, you can set the exact time for the flash to start firing. This allows the RF60 to do not only first-curtain and second-curtain sync (also referred as front and rear curtain), but can fire at any given point of the image.

High power up to Guide Number of 56 meters
The RF60 has powerful guild number GN56. The Fresnel lens was specifically designed to give out the best possible light.

Multi-flash feature
In Multi mode, a rapid series of flashes is fired to capture multiple images of a moving subject in a single frame. This feature is available in all three flash modes so its users can create the desired effects with both on and off camera flash.

The RF60 is meant for use in a multiple flashes setup and designed with the needs from the need of professional photographers in mind.

Whether it's a wedding or commercial shoot, timing is crucial. RF60 users will not only find adjustments quick and easy, the LCD also displays necessary information photographer needs to know. All in all, it offers an intuitive flash photography experience. So you, as the photographer, do not need to fiddle with the gear but instead enjoy the shooting experience.

Back to top
Back to top
Product Code: 3046574-wex Manufacturers Part Number: DICFLACACRF60