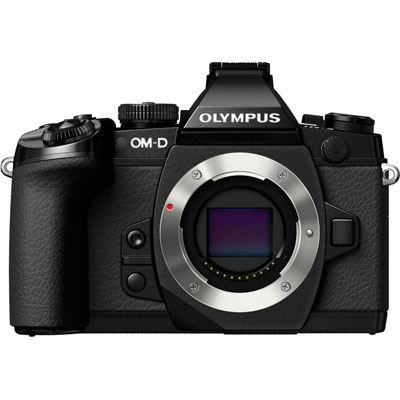 The Olympus OM-D E-M1 Digital Camera with Micro Four Thirds mount is built around a 16.3 megapixel Live MOS sensor, next-generation TruePic VII image processor and 5-axis Image Stabilisation system, which uses Fine Detail Technology II to get the very best still image and movie quality out of every lens. Its electronic viewfinder (EVF) with automatic backlight adjustment and 1.48x magnification ensures a bright, responsive image for easy framing and real-time setting adjustments. And thanks to built-in Wi-Fi, E-M1 users can also share their images straight to social media via their smartphone.

Olympus’ fastest ever AF
Alongside the design specialists who gave the OM-D E-M1 its perfectly proportioned casing, Olympus clearly employs some of the world’s best autofocus engineers. E-M1 owners reap the rewards with Olympus’ fastest ever AF system. DUAL FAST AF delivers very quick autofocus performance with both Micro Four Thirds and Four Thirds lenses, which can be mounted on the E-M1 using an adapter. The camera detects which sort of lens you are using and switches automatically to the more suitable AF technology – either phase detection or contrast AF. Four Thirds lenses work with phase detection, whereas Micro Four Thirds use Contrast AF. Both AF technologies can accurately focus on any one of 37 focus points to pick out, for example, a single stallion among stampeding horses, or on 81 target areas to automatically track the whole herd.

Olympus’ best ever images
When a company with the optical pedigree of Olympus claims a new camera delivers the best image quality of any consumer model it has ever made, that device has a lot to live up to. The OM-D E-M1 more than matches expectations – and rebuffs DSLR sceptics – thanks not least to three key, complementary components. The Four Thirds and Micro Four Thirds lens system (63 lenses and growing) combines with a new 16-Megapixel Live MOS sensor and the seventh generation of its powerful TruePic image processor series. TruePic VII uses New Fine Detail Technology II to get the very best still image quality out of every lens by adjusting processing in line with the type of lens attached and aperture setting.

Olympus’ most powerful ever electronic viewfinder
Olympus gives creativity free reign and breaks new ground in electronic viewfinder design in the shape of a new EVF with fully 1.48x magnification, which is approximately 1.3x larger than a typical DSLR. In addition to high, 2,360,000-dot resolution, DUAL FAST AF and automatic backlight adjustment, the EVF scores over optical viewfinders with a new feature that is unique to the OM-D E-M1. HDR Preview Mode allows you to monitor HDR images in the EVF before you shoot and you can likewise experiment with four key settings before shutter release: aspect ratio, magnification, colour and highlight & shadow. The OM-D E-M1 also introduces a new way to adjust colour. Instead of graphs and numbers, the newly developed Colour Creator lets you intuitively play with colour by tweaking dials on top of the camera. You can check the result in real time on the Live View EVF. The time lag is a mouth-watering 29ms, which is too fast for the human eye and results in natural movement even with very fast-moving subjects****.

**** Some extremely fast-moving subjects may not appear to move smoothly.

Olympus’ smartest ever WiFi integration
Among the E-M1’s many other strengths are built-in WiFi, which lets it communicate quickly and simply with a compatible smartphone. You can send selected images straight to websites and social media via your phone and effectively use it as a remote control to avoid touching the camera during long-exposure shots. Pairing is quick and easy via a QR code. You can mirror the Live View LCD on your phone’s touch screen, then focus and release the shutter remotely via WiFi (in P, A, S, M modes) directly on the display. Even the unique and spectacular Live Bulb effect can be previewed on your smartphone. Live Bulb updates the Live View image at pre-set intervals during bulb exposures.

Olympus’ most pro-friendly system camera
The OM-D E-M1 was designed in close collaboration with pro photographers who gave Olympus a wish list of ways to make cameras more ergonomic. With an eye on the fate of unwieldy DSLRs, re-assignable dials, switches and rings are big and beautifully laid out to ensure the camera sits comfortably in your hand and is easy to use. For example, you can adjust aperture and exposure using two dials on the back, then flick a lever to change the function of the dials and adjust ISO and white balance with the same movement.

Olympus’ most reliable ever camera
Olympus’ record-breaking* Hybrid 5-axis Image Stabilization is exceptional because it compensates for movement around the axis of the lens as well as horizontal and vertical shift, and the usual yaw and pitch. This makes it noticeably easier to capture sharp, hand-held stills, especially at large zoom ratios. In fact, the Hybrid IS is so effective that you can record a shake-free Full HD movie literally on the run – even with long focal lengths – easily framing shots with the viewfinder or LCD in real time. Just as reassuring is the E-M1’s rigid magnesium body, as well as its dustproofing**, splashproofing** and freezeproofing**, which protects your investment with another Olympus world-beating system. The OM-D E-M1 is the best camera guaranteed to work perfectly in temperatures as low as -10°C*.